At several tube and train stations in London, different men were spotted holding placards that said they cheated on their girlfriends.

Many believed that they had truly been unfaithful and were forced to wear their shame in public until they started noticing that the texts were identical; same handwriting, exact words.

The stunt is now believed to be a campaign for a dating app with its name appearing in its signature writing style. 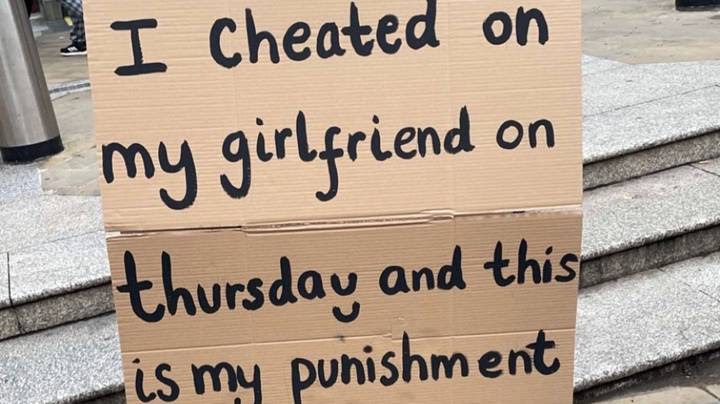 As social media users spotted the signs at different locations, they took pictures and posted them online.

In response, another user posted another picture of a similar scene and wrote: "And Victoria."

It didn't stop there. A third person tweeted another picture and typed: "Bank Station... Must've been some crazy Thursday night."

With the traction the images were getting, it did not take long before people noticed a similarity in the texts. The 'y' in "Thursday," as seen in the text, was written the same way a dating app called Thursday styled its logo.

This led to speculations that the stunt was likely a publicity stunt and advertising campaign for the app.

On one of the similar posts that went viral, the dating app's official Twitter handle commented: "We do not condone cheating."

How The Public Reacted To The Campaign 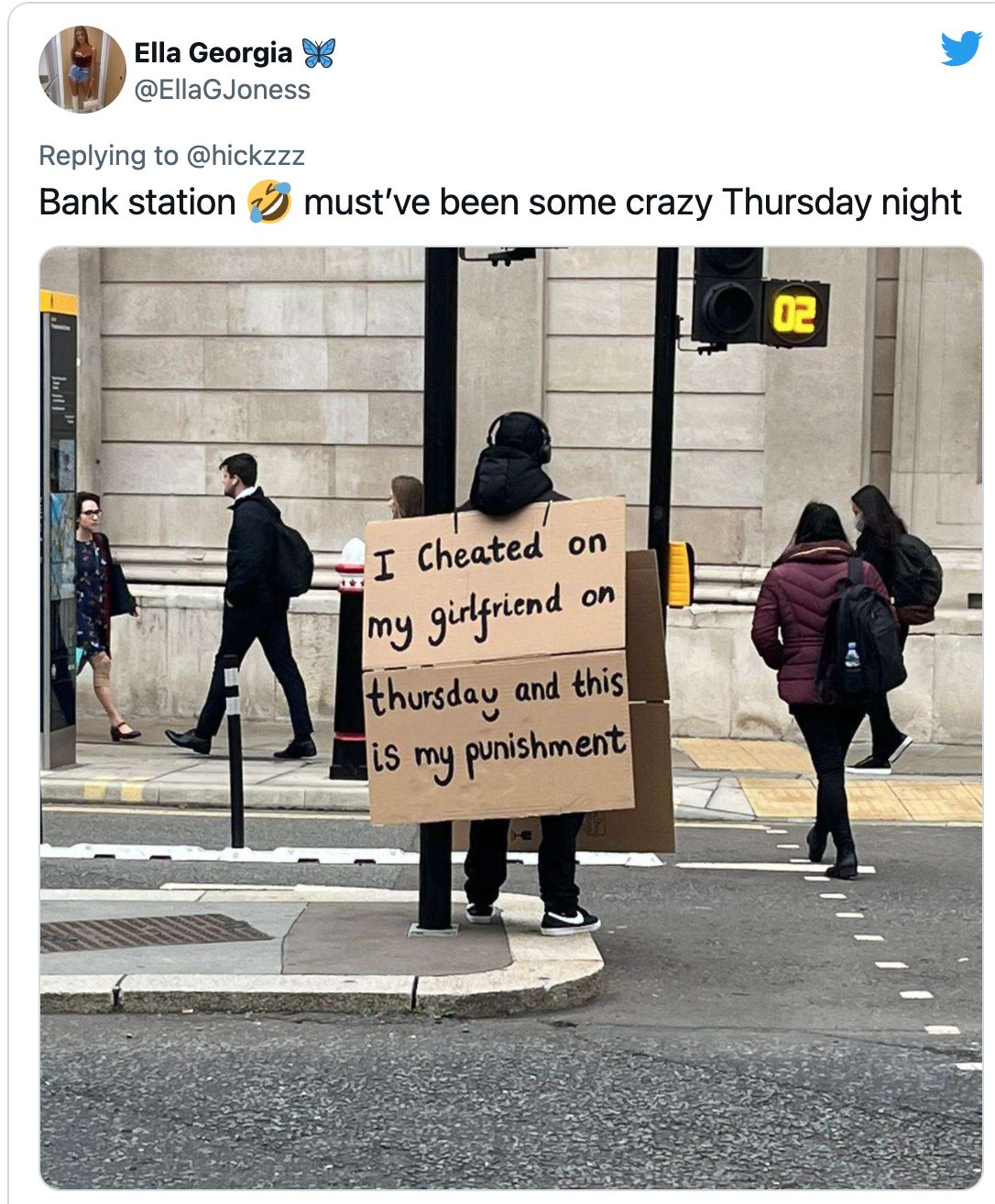 Many people found the stunt questionable. One person tweeted: "Then this is one weird ad campaign @thursdaydating."

Demanding explanations for the quite displeasing ad campaign, another asked: "But you're perfectly advertising your app as a way to facilitate cheating on your partner?

In response to the dating app's tweet about not condoning cheating, another person commented: "Yet your whole campaign concept is based around it." 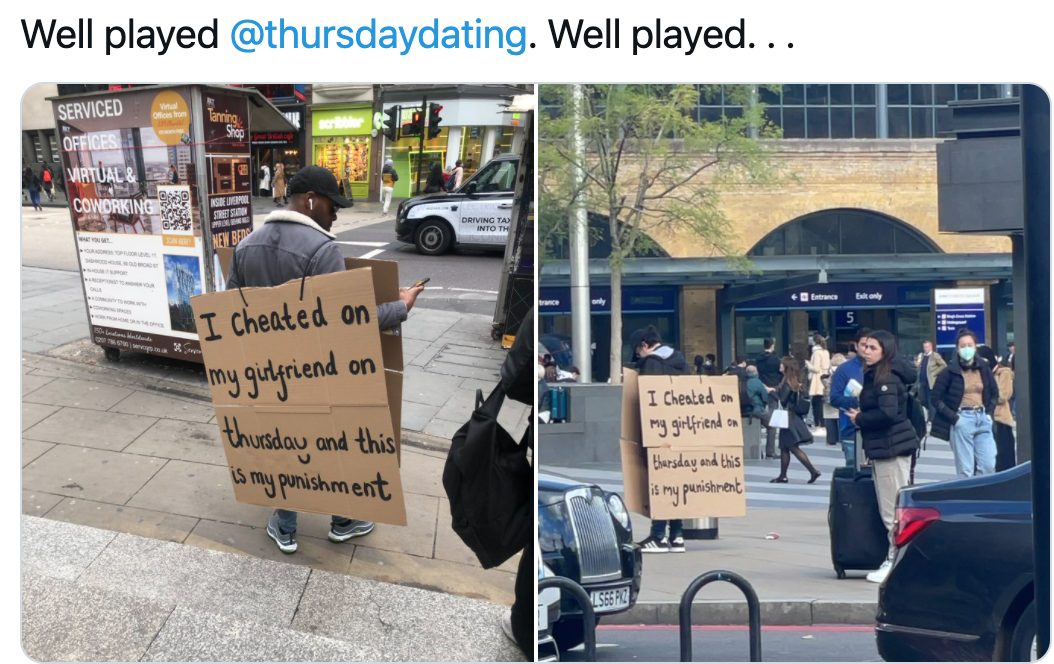 Meanwhile, some believed that the campaign, although raising controversy, was pretty effective. It did gain the app the attention it sought. 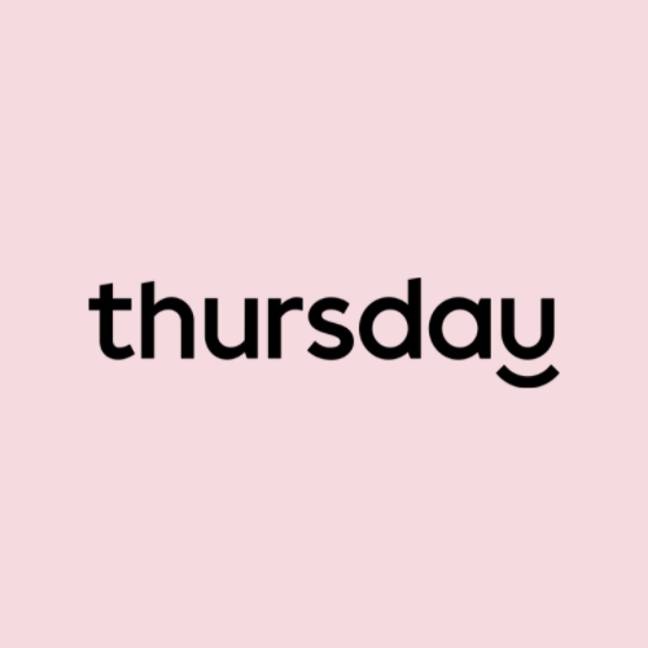 It is a dating app that goes live only once a week on Thursdays. It sends push notifications to its users each week, presenting possible matches while giving them 24 hours to arrange a date.

Besides coming under fire for this most recent ad campaign, it also got negative reviews for a push notification it sent to its users a few weeks back. The notification read: "Sleep well. Guessing you're alone tonight."

Although it was aiming at humorously pushing its clients to take action, it was poorly received. Many users saw it as "single-shaming."

TV critic Scott Bryan tagged the app's official Twitter handle and said: "Wow, this dating app can go to hell. A reminder that advertisers have got to stop shaming single people to feel bad about themselves when relationships don't solve your problems."

Another user commented on how disrespectful the push notification was, saying: "I've known the feeling of loneliness, and reminding someone of that feeling for the sake of a 'funny' notification is awful. Respect your audience. You never know who you're talking to."

The app issued an apology in notification to correct the public's view, saying: "We got a notification very wrong last night. We're here to empower singles, not shame them. We're sorry."

Well, we hope they do better, be it push notifications or advertising campaigns.