After her husband, the Grand Prince Igor I, was killed, the 10th-century princess Olga of Kyiv executed one of the most bone-chilling revenge tours in history.

It was 945, a chaotic time in Ukrainian and Russian history. Kievan Rus consisted of what is today Ukraine, Belarus, and Russia. Igor, the ruler of this vast land, traveled to the edges of the empire to investigate why one of the tribes, the Drevlians, had stopped paying tribute. 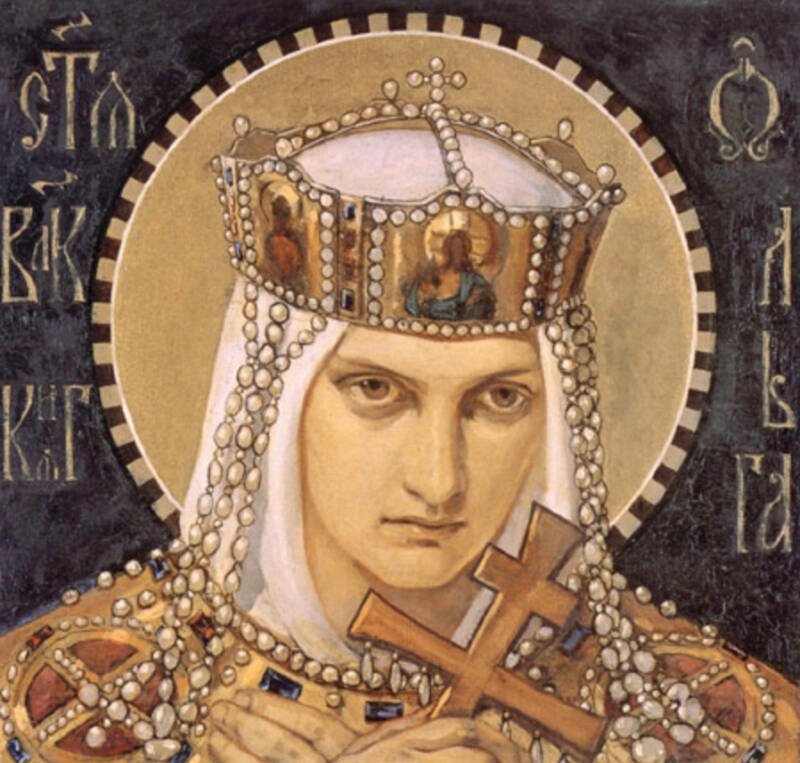 It turned out that the Drevlians had turned against him, and upon his arrival, he was subjected to a terrible form of torture.

For the years to come, Olga worked tirelessly to destroy the Drevlians. She is known as a warrior princess and a Saint due to the Russian Orthodox Church's nomination in 1547.

She remains, until this day, Ukraine's patron saint of widows and converts. 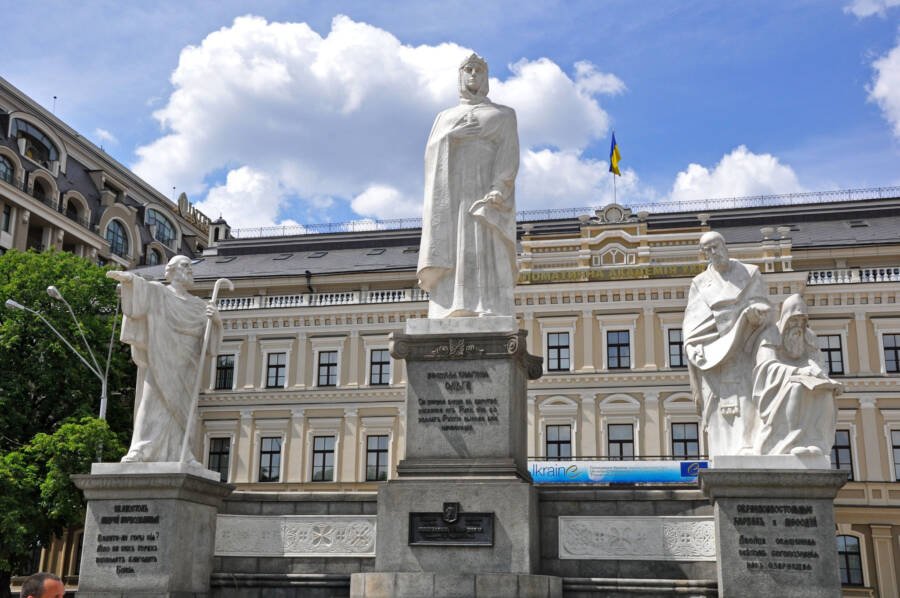 Olga of Kyiv was born around 900 C.E. in the Viking empire known as Kievan Rus. Today the location of her birthplace is Pskov, Russia.

Olga was supposedly of Viking origins, as she descended from the first Vikings who settled in Rus. However, she is known as a Slavic ruler.

At the age of 15, she married Grand Prince Igor I, the ruler of the vast empire.

Igor's adoptive father, Prince Oleg, had a generation earlier strengthened the power by establishing the capital of Kiev (now spelled as Kyiv).

The Rus empire can best be described as a melting pot, consisting of different tribes and settlements held together by the Viking rule.

One of the tribes, the Drevlians, fought along with the Kievan Rus against the Byzantine Empire. However, after Oleg died in 945 C.E., they stopped paying tribute, a form of tax.

According to some sources, Igor asked for too much. In either case, the tribe decided to murder him brutally. According to a Byzantine columnist of the time, this is what happened:

"They had bent down two birch trees to the prince's feet and tied them to his legs. Then they let the trees straighten again, thus tearing the prince's body apart."

Prince Igor left behind his then 20-year-old wife Olga and their three-year-old son, Sviatoslav. Since his son was too young, Olga became the new regent of Kievan Rus. 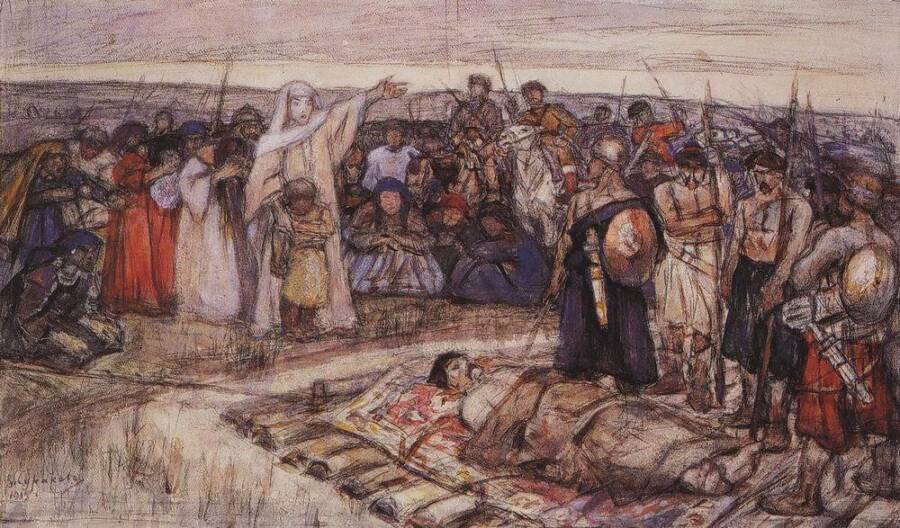 The ruler of the Drevlians, Prince Mal, was empowered by the tribe's success, and he decided on a bold move. Before Igor's body was cold, the tribe Prince proposed to Olga.

Mal planned to bring Kievan Rus territory under Drevlian control, and this could be achieved through marriage with the widowed ruler.

Understandably, Olga had no intention of marrying her husband's murderer. However, she used the situation to her advantage, and instead of rejecting the envoys, she invited them to the castle in Kyiv.

When the twenty envoys arrived the next day, dressed in their finest robes, Olga's soldier had prepared a deep hole in the middle of the courtyard. The envoys were thrown to the bottom of the hole to be burned alive.

Olga watched while the men slowly suffocated. They screamed that their suffering was "worse than the death of Igor." The dying men were then buried alive.

This was only the first step in Olga's plan to avenge her husband's death.

The Burning Of The Bathhouse 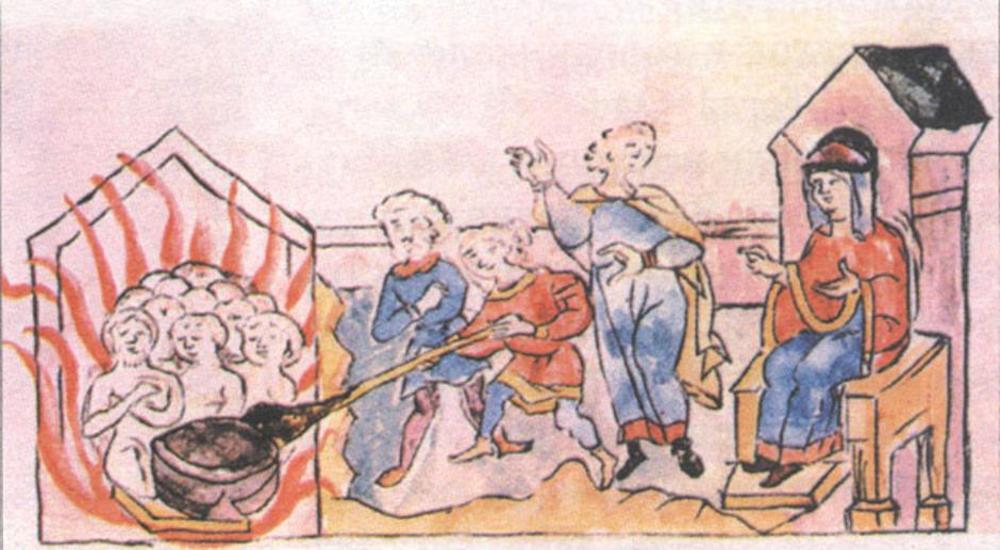 Before the news of the massacre reached the Drevlians, Olga wrote to Prince Mal. She pretended to be interested in the marriage and asked for Mal's best men to be sent to Kyiv so they could escort her back to the Prince.

Mal, oblivious of what had happened to the first envoys, thought it was a good idea. He sent a group of chieftains to Kyiv.

Upon arrival, the chieftains were offered to clean themself up in a bathhouse after the long journey. Unaware of the risk, the men entered the building and were immediately locked inside.

Olga ordered the doors to be bolted and the building burnt to the ground. No one survived. 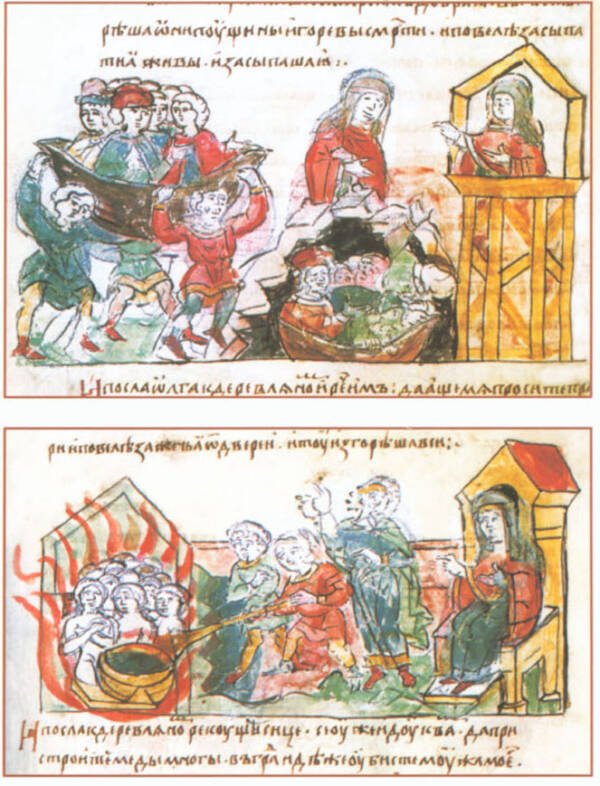 The Princess then traveled north to reach the Drevlian capital before the news of what had happened in Kyiv spread.

Olga hosted a banquette upon her arrival to show she held no grudges. She invited the Drevlian soldiers.

The feast was a tribute to her late husband to honor his memory before Olga, and Prince Mal would proceed with their marriage. There was an abundance of alcoholic drinks, mead, and ale.

In the middle of the festivities, while the Drevlian soldiers were drunk and unprepared, she ordered her loyal man-at-arms to slaughter all 5000 of them.

Olga herself and her lady servants allegedly walked around and cut the soldiers' throats that had already passed out drunk. It was a slaughter.

The Siege Of The Drevlians' Capital 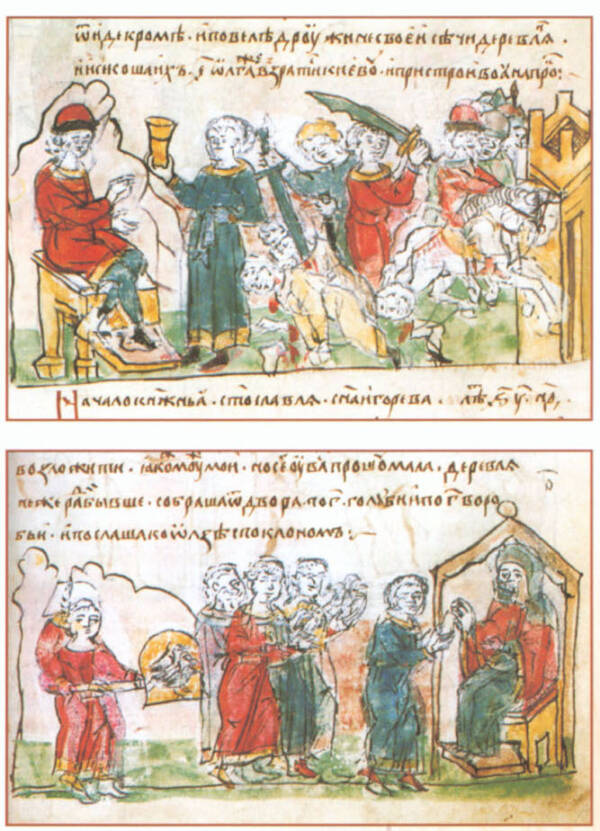 After the massacre, the Drevlians realized their defeat, and they pleaded with Olga to accept their tributes. The Princess occupied the capital for a year, but she could never forgive.

Finally, she made an offer of peace, and according to the Tale of Bygone Years, she ordered every household to give her three pigeons and three sparrows.

The columnist in the Kievan Rus chronicle wrote about what happened next:

"Now Olga gave to each soldier in her army a pigeon or a sparrow and ordered them to attach by thread to each pigeon and sparrow a piece of sulfur bound with small pieces of cloth."

At night, Olga ordered the sulfur to be set on fire and the birds to be realized, and then they flew back to their thatched nests on the houses with their burning cargo.

The houses were lit on fire, all at once, and there was no chance of stopping the inferno. Olga's soldiers captured the fleeing citizens.

Some of them were slaughtered, and others were sold into slavery. A lucky few were selected to stay and rebuild the city. They were broken and willing to pay whatever she asked in tribute.

How Olga Became A Saint

After the horrors she inflicted, how could she become a Saint in the Roman Catholic and Eastern Orthodox churches?

The answer to that question is her conversion to Christianity.

When Emperor Constantine VII invited her to visit Constantinople, Olga was inspired, and she decided to convert to Christianity. When she returned to Kyiv, she wished for the Kievan Rus people, that were pagan, to follow in her footsteps.

According to a Byzantine columnist, the nearby Byzantine Empire thought of her very highly after the conversion. She was described as:

"She shone like the moon by night, and she was radiant among the infidels like a pearl in the mire since the people were soiled and not yet purified of their sin by holy baptism."

The Byzantine emperor was impressed and asked for Olga's hand in marriage. She turned him down, in a peaceful manner this time, and chose to stay a widow.

The Russian Orthodox Church canonized her as Saint Olga of Kyiv, the patron saint of widows and converts five hundred years later.