After John McAfee was found dead in his prison cell in Spain, his fans were utterly shocked. The troubled businessman had just had his extradition to the United States approved by a Spanish court.

The entrepreneur got into big trouble after he admitted that he had not filed his tax returns. He confessed as he ran for president in 2019 during the U.S. presidential elections.

Even though he is gone, many people are still doubtful the man would commit suicide. These people are basing their opinions on the fact that McAfee said on many occasions that he would never do anything of the sort.

Getting subtle messages from U.S. officials saying, in effect: "We're coming for you McAfee! We're going to kill yourself". I got a tattoo today just in case. If I suicide myself, I didn't. I was whackd. Check my right arm.$WHACKD available only on https://t.co/HdSEYi9krq🙂 pic.twitter.com/rJ0Vi2Hpjj

The man even went to the trouble of having the phrase "Whacked" tattooed on his arm as a way to prove that if he ended up dead, it would not be his own doing.

Previously, McAfee had posted a tweet in 2020 in reference to Jeffrey Epstein, who had died under mysterious circumstances while under custody.

Epstein's death was declared a suicide, but many people still think that powerful friends killed him because they did not want him to expose them by speaking to the authorities. 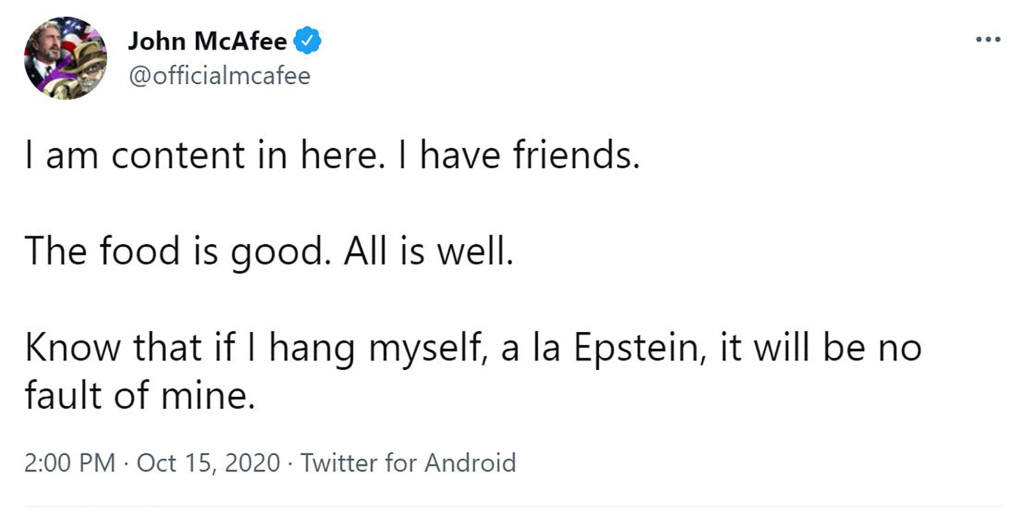 While in prison, McAfee sent many lighthearted and philosophical messages. He often talked about the disheartening circumstances in the prison he was locked up in and saw the funny side of his unfortunate situation.

That said, he was growing increasingly frustrated with his life behind bars.

At one point, he said that he had just spent three months in a Spanish prison before admitting that, given a choice, prison would not be at the top of his list.

He explained that if lawmakers had to spend a day in prison before making laws for nonviolent crimes, they would come up with less severe punishments.

Before he tragically died, McAfee talked about being an enemy of the state. Allegedly, various government officials were determined to get him.

The entrepreneur had run for the position of United States president in 2016 and 2020 under the Libertarian Party. At the time, he was quite vocal about his political beliefs.

McAfee Was No Stranger To Controversy

McAfee has always been embroiled in one controversy or another, even before his most recent political troubles. For instance, in 2012, he had to flee from Belize when he became a suspect in his neighbor's death.

His escape was cut short when he was arrested in Guatemala, but he still managed to get away and enter the US. While there, McAfee was able to evade questions from the authorities in connection with the murder by becoming a popular public figure.

McAfee became a famous name in the computing world after he founded a software company named after him in 1987. He operated the company until 1994, when he resigned.

The man helped come up with the first commercial antivirus software, making him one of the first successful tech entrepreneurs in the world. At the moment, the company makes a broad range of enterprise security software.

In the year 2011, the company changed hands after it was bought by Intel. However, it still has the McAfee brand name, which is one of its greatest assets.