Man blasted on social media after he called the drawing of a tampon 'obscene' on Treasury announcement about the end of VAT on women's sanitary products.

Posting on Twitter, the Treasury in the UK announced the dissolution of 'tampon tax' as of 1 January 2021.

They shared the news alongside a simple drawing of a tampon.

While the post garnered thousands of likes, one radio presenter and journalist Adam Garrie created a storm on Twitter after stating that the image was 'obscene.' 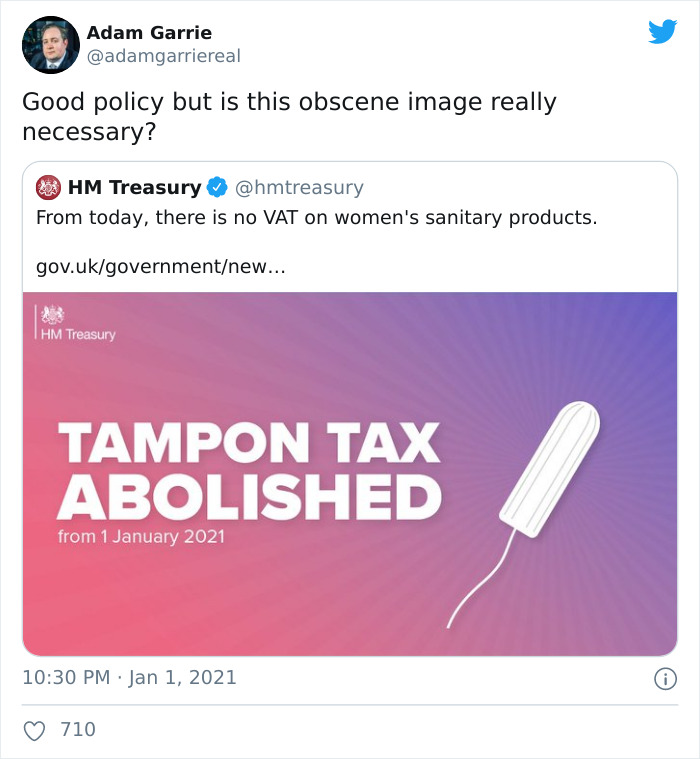 The controversial commentator, who has presented a YouTube series The History Boys with George Galloway, is a 'geopolitical analyst.'

He also runs the now-defunct Eurasia Future, described as a 'Global Policy & Analysis Think Tank' and an 'independent news platform.'

As you would expect, the internet was ruthless with Gerrie after his comments on tampons.

Some users even described his comments as 'misogynistic.'

Here's How People Reacted to Garrie's Tweet and What He Responded

Speaking to Bored Panda, he said:

"If someone wants to publish photos of their genitals, bodily fluids, or anything else of that nature, I shall defend their right to do so."

"If someone seeks to bully me into enjoying it, I shall calmly state my entirely reasonable opposition."

"In an age where most schools are concerned with teaching people what to think rather than how to think... It should surprise no one when a simple and reasonable statement can arouse such a storm in a teacup."

"Beyond this, the remarks of many on the self-described left make something else abundantly clear."

"We are living in an age in which conceptions of public and private spheres have become worryingly reversed."

Garrie explained how a small amplified mob is challenging freedom of speech and the ability to follow traditional teachings.

"Such people believe that the freedom of artistic expression, free speech, and the freedom to assemble should be contingent on the approval of a numerically small but heavily amplified mob."

"Simultaneous to this, they offer nothing but a whirlwind of execration for those who wish to lead their private life in a manner that is based on the teaching of traditional religions (whether Christianity, Judaism, Islam, Hinduism, etc.) and on the principle that one's home is one's castle."

"Not only are they comfortable with sharing photos of their bodily fluids and genitals online, but they seek to force those with personally traditional values to revel in the kind of exhibitionism which they enjoy."

Garrie Identifies Himself as a Libertarian 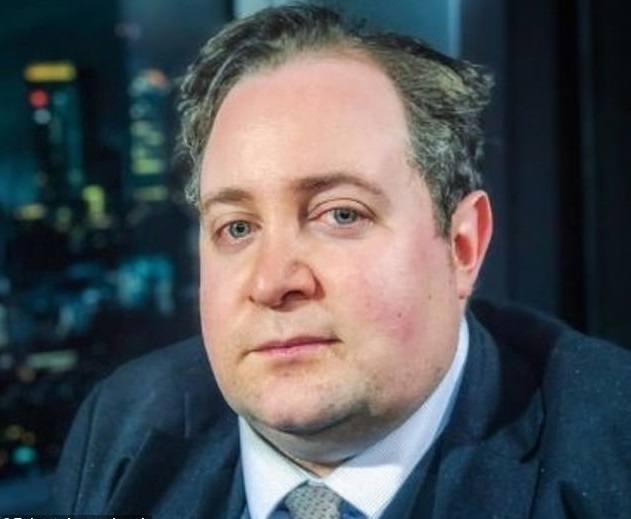 He revealed that he has no problem with other people being open about the things that would have been classified as a person's 'private life' in earlier generations.

However, he believes people are coercing him to follow a single line of thought.

"I refuse to genuflect before a movement which seeks to make erstwhile private activities into a kind of public idolatry to which we must all pay tribute."

"'To each their own,' used to be the mantra of the liberal. Today, however, it would seem that those who disingenuously call themselves liberals have adopted the Maoist principles of conformity through compulsion."

"In other words, it's not just enough to tolerate one's point of view, which myself and other libertarians certainly do. But one must publicly endorse it or else be treated as some sort of criminal."

"In this sense, my opposition to a piece of crude government propaganda has been most educational."

"I have seen first hand the intolerance, bigotry, and sexism of those who want all men and women to think alike."

"I believe in individual liberty. And I shall continue to oppose all those who want to enforce a single point of view on others."

He said, however, that he'll be on the frontlines fighting against any censorship, whether enforced by the left or the right.

"To those who revel in the fact that the leftist elite are currently in power, I shall say this: one day, the extreme right may take power and become the new elite."

"If they do, they shall seek to censor you. As a classical liberal, I shall defend you against them when and if they take power."

"The words of John Donne ought to toll heavily in the ears of those who think that censorship and bullying is a one-way street. It is certainly not."

A Stream Of People Disagreed With Garrie's Arguments

Like most of his critics, Garrie believes abolishing the tax was a positive thing. However, he objects to posting 'an image conjuring thoughts of bodily fluids' on a government channel.