A man accidentally spends $420 on a steak after misreading the menu at a Gordon Ramsay restaurant. But he says he has no regrets, despite the heart-stopping bill.

While visiting Atlantic City, Jeffrey Paige and his girlfriend made a reservation for outdoor dining at Gordon Ramsay Steak at Harrah's.

His initial plan was to get some Wagyu beef. But when he saw the menu had some triple-seared Japanese A5 — also known as Kobe — he had a change of heart.

Kobe beef is widely considered one of the best cuts of steak available. And Paige thought it was a real bargain because, on the menu, he said it looked as though the Wagyu cost $80 for 8oz, while the Kobe was $35 for 4oz.

It seemed like an irresistible offer, so he went on and ordered the Japanese steak.

"I'm in my 40s and only had Wagyu before in my life just twice."

"I had never had real deal Kobe. It was like nothing else you'll ever have. Melt in your mouth delicious."

"We also ordered a couple of sides, appetizers, and my girlfriend had chef Ramsay's famous beef wellington for the first time ever."

"All in all, an amazing meal, and we were glad we could support the restaurant and its staff during these challenging times. And I still couldn't believe Kobe was cheaper than Wagyu!"

Unfortunately for Paige, he had misread the menu slightly.

The beef he had ordered was $35 per ounce with a minimum order size of 4oz. Not $35 for 4 ounces as he initially thought. 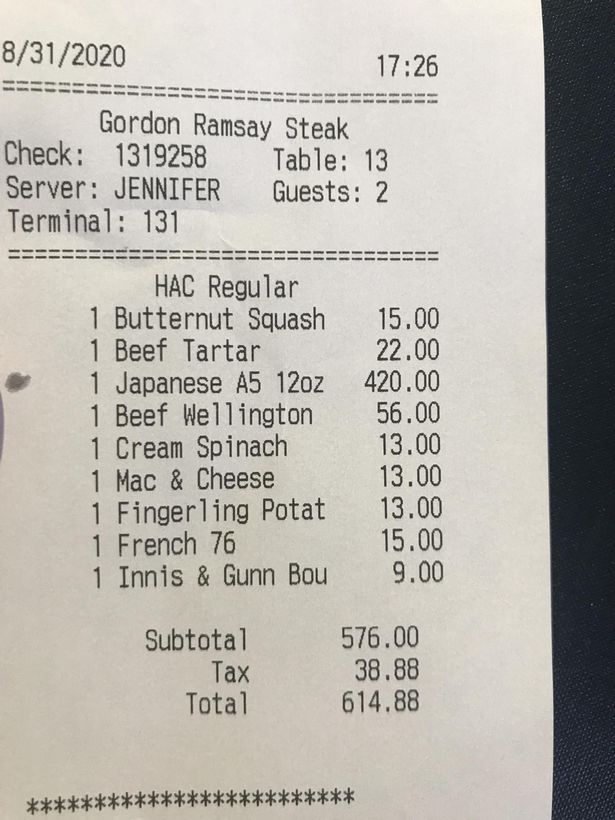 Taking full responsibility and thankfully being able to find humor in the costly mistake, he added:

"I wish Chef Ramsay was there to come out and call me a donut for f***ing this up, lol."

"I enjoyed the hell out of it. No regrets, baby!"

In an interview with the Mirror, Paige said:

"My family and I are huge Gordon Ramsay fans, and we watch his shows - Hell's Kitchen, Masterchef. And I've been to his restaurants before and loved everything we've gotten."

"The steak and the experience were unforgettable. And if I had to make this blunder at any restaurant in the world, I'm glad it was at Chef Ramsay's."

However, after sharing his experience, one commenter revealed that he shouldn't be too disheartened.

"Thank God it was delicious, but that bill... ouch."

Let's hope he learned the lesson.