With the legalization of marijuana spreading across the US, the cannabis industry is expected to grow exponentially in the coming years.

But before you decide to buy or sell it, make sure it's legal in your state.

Marcus Cornwell from Michigan was arrested for selling weed from a vending machine attached to his home.

While you can buy or sell marijuana recreationally in Michigan, you must do it through legal channels and proper licensing.

Marcus, however, sold it on a vending machine.

According to police reports, Cornwell had a unique vending machine attached to the side of his house at Mettetal Street and Fenkell Avenue — and he wasn't selling pop or snacks.

Instead, he had stocked the vending machine with marijuana and pills.

A Weed ATM Is A Great Idea... Until You Get Busted

Officers from the Bureau of Alcohol, Tobacco, Firearms, and Explosives (AFT) had received a tip that a man was using a vending machine outside his home to sell "marijuana and pills."

The tip also claimed the dealer had multiple firearms and had been selling drugs and guns to minors.

AFT agents then carried out surveillance on the house and were able to make two controlled weed purchases from the marijuana vending machine.

Afterward, they executed a search warrant on the house and found 18 firearms, dozens of rounds of ammunition as well as several pounds of marijuana. 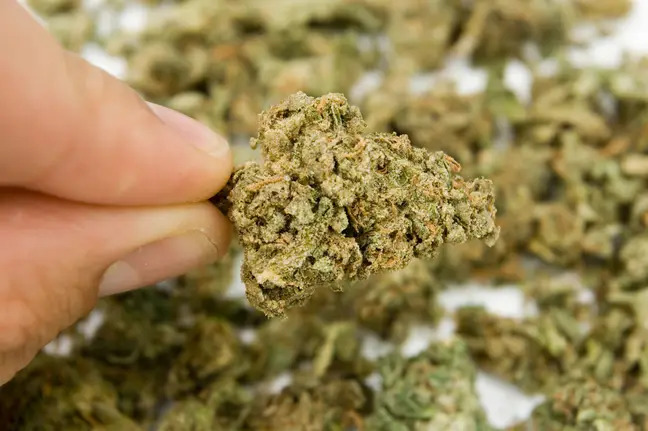 Cornwell was arrested in March 2022, just a month before Detroit's City Council passed an ordinance allowing sales of adult-use cannabis.

During an interview with cops, Cornwell said he made around $2,000 daily from the vending machine, which was his primary source of income.

Cornwell, who has a lengthy list of prior convictions, also told police that he was a "collector of firearms" and was aware that "he wasn't allowed to own guns."

He was later released on a $10,000 bond and issued various restrictions, including a ban on operating the vending machine.

Michigan is one of the current states to allow the selling of marijuana for recreational use.

"It is legal for adults over 21 in Michigan to grow, consume and possess marijuana."

"The law allows individuals to grow up to 12 plants in a household and to possess up to 2.5 ounces of the drug and 15 grams of concentrated marijuana."

"Michigan now operates licensed retailers for recreational cannabis use, as well as provisioning centers for medical use, according to David Harns, interim communications director for Michigan's Department of Licensing and Regulatory Affairs."

Cities like Detroit are eager to catch up and cash in on Michigan's lucrative cannabis industry.