Some photos from the past are instantly recognizable, perhaps none more so than lunch atop a skyscraper. The spine-tingling image depicting 11 construction workers hanging precariously from a beam has become a symbol of New York equivalent to yellow taxis, The Empire State Building, and Times Square.

The somewhat grainy picture of the men sitting mere inches from death demonstrates how far technology and safety regulations have progressed. Lunch atop a skyscraper was taken in 1932 on the 69th floor of 30 Rockefeller Plaza towards the end of its construction. This building still stands today and is located just south of Central Park, visible in the image background.

So what is the story behind the photoshoot? Is it even real, and if so, who captured it? Also, who were the men that risked their lives for this iconic photo opportunity? We will explore these questions below. 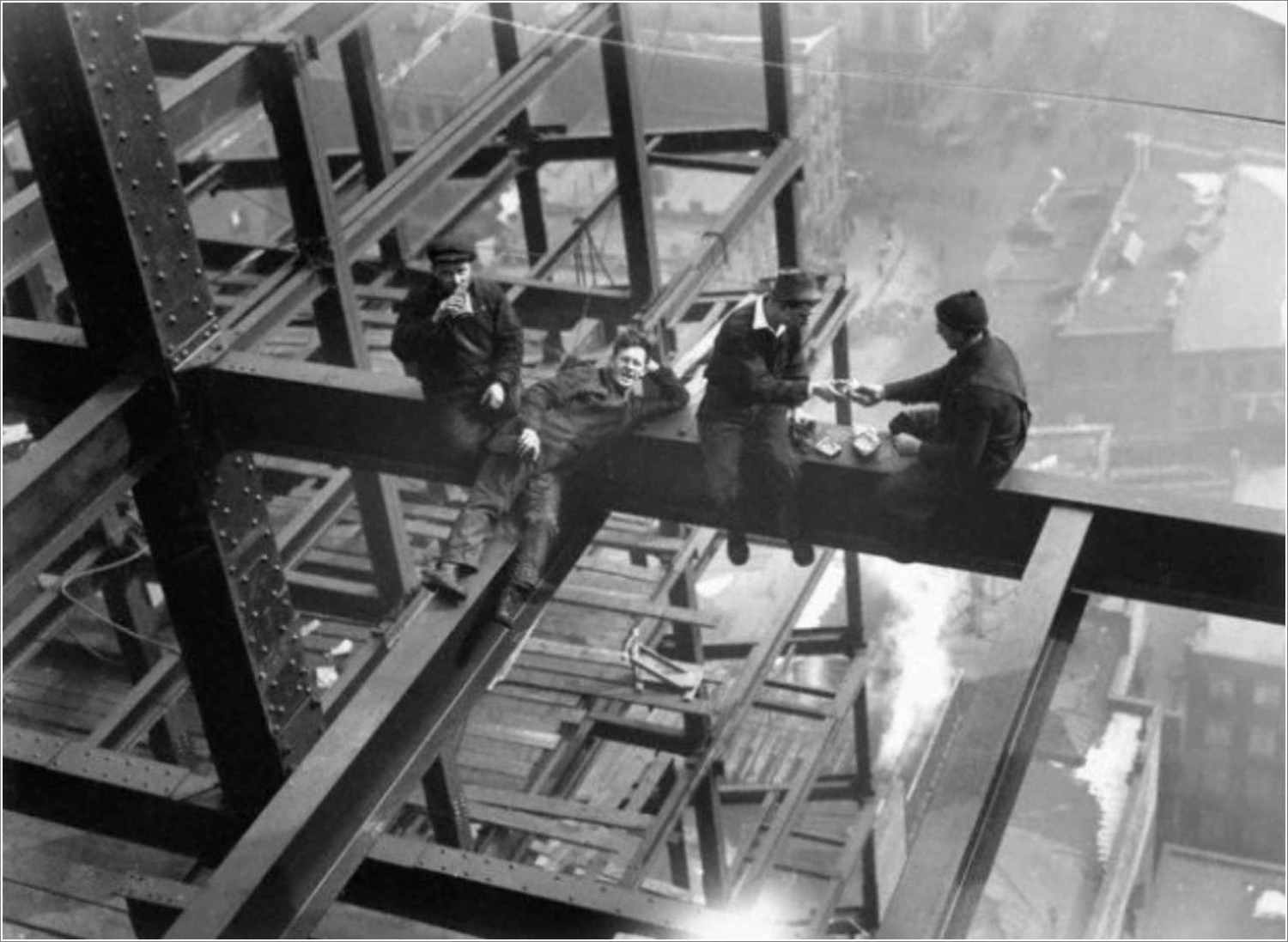 America was still suffering from the Great Depression when the photo was taken. During this challenging financial period, the Rockefeller company helped get the nation back on track by employing a quarter of a million people. This had a significant impact in a time of such widespread joblessness. One of their major projects was constructing the Rockefeller Center in New York, of which 30 Rockefeller Plaza is (to this day) the main building.

People worked in many sectors, from mining in quarries, delivering materials, making windows, to building at high altitudes. Lunch atop a skyscraper brilliantly captures some of those daring workers who took on the most dangerous job without any worries about their safety.

The construction workers themselves were some of New York's poor immigrant workers. They mainly came from Ireland and other European countries. The day-to-day work paid well but was incredibly risky. After all, the men worked hundreds of feet above the ground with no harnesses, so one slip meant certain death.

Still, many citizens who saw the photo when it was published were inspired by its hopeful message. The image showed how an extraordinary feat of construction was made possible with the bare hands of ordinary working people. More subtly, it hinted that the nation of America would get through that difficult period against all odds with a smile on its face.

The Purpose Of Lunch Atop A Skyscraper 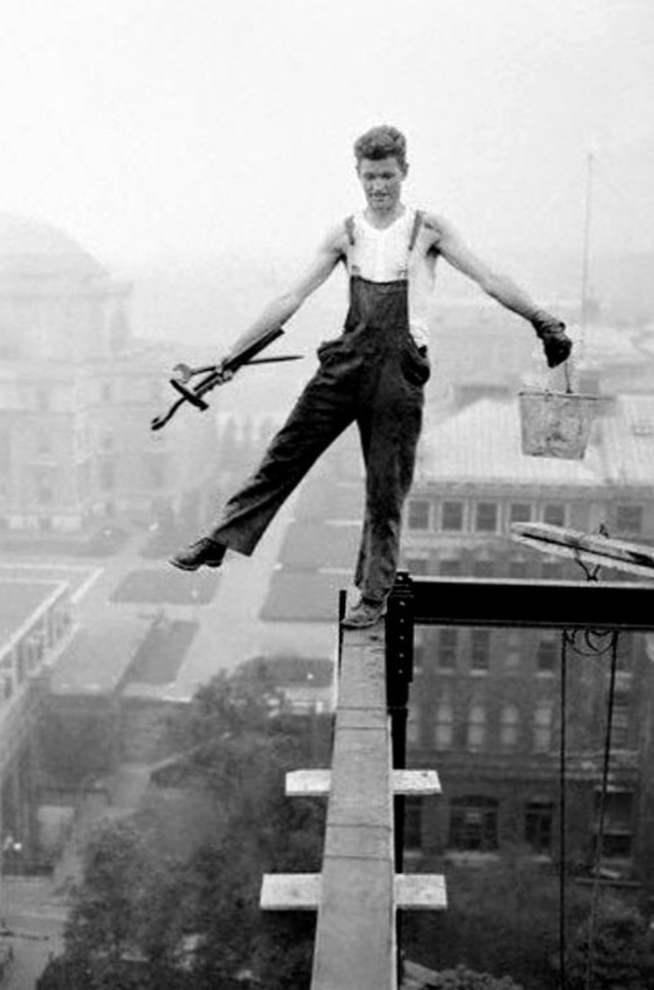 The scene of 11 men eating lunch, talking, and smoking 850 ft above New York's streets was not as casual as it looks. The photo was staged as part of a publicity campaign to promote the opening of the Rockefeller Center. Indeed, several shots of nerve-wracking stunts at dizzying heights exist, but Lunch atop a skyscraper is by far the most recognizable.

Another picture taken from the same angle shows all 11 men looking at the camera and waving happily.

One similar and possibly more deadly picture shows a few workers stretched along the same beam, pretending to nap. Another captures a solitary worker, tools in hand, balancing on a beam-like tightrope. These scenes are so unimaginable today and are guaranteed to make your palms sweat.

Lunch atop a skyscraper was taken on September 20th, 1932, and first appeared in the local newspaper, The New York Herald Tribune, just 12 days later. There have been numerous parodies and recreations of the classic scene in the many years since the original photo.

Who Was The Photographer Of Lunch Atop A Skyscraper:? 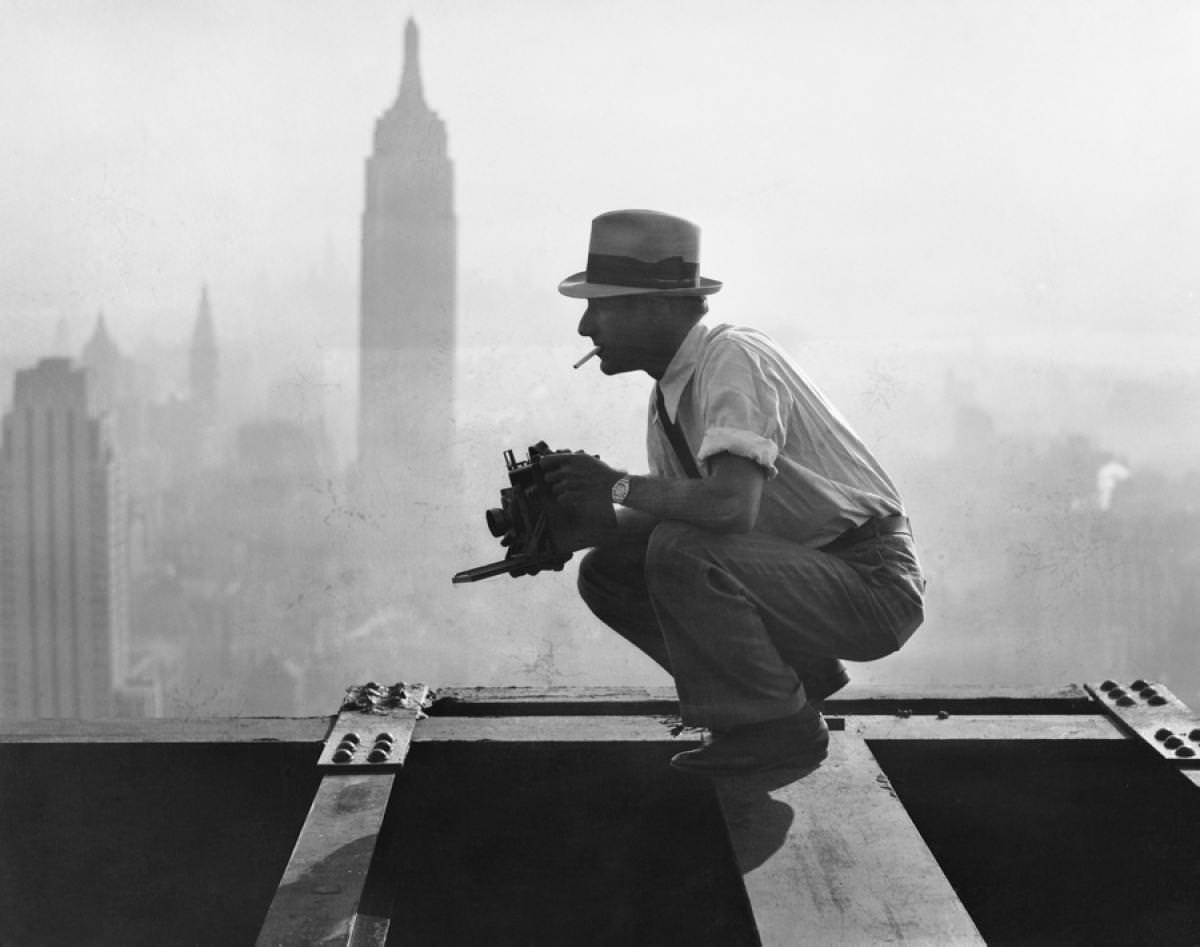 This is a slightly murky topic because a trio of photographers was working at the Rockefeller Center around the time of the famous shot. Hence, some people still question the exact identity of the photographer.

The three photographers linked to lunch atop a skyscraper are Charles Ebbets, Thomas Kelley, and William Leftwich. The picture initially had no author, but in 2003, Charles Ebbets was eventually revealed to be the photographer. His children proved beyond much doubt that he took the photo.

Their evidence included an invoice for his original work, plus the original negative glass plate taken on the day in question. Despite being cracked and dirty, we would not have the stunning photograph today were it not for that small fractured piece of glass.

All three photographers deserve a lot of credit for their work. By going to the top of the Rockefeller Center, they took the same risks as the construction workers. Several images of the photographers are just as incredible as lunch atop a skyscraper. In them, you see the cameramen balancing delicately on beams hundreds of feet in the air. They did so while holding heavy cameras, yet very few knew who they were.

What About The Workers? 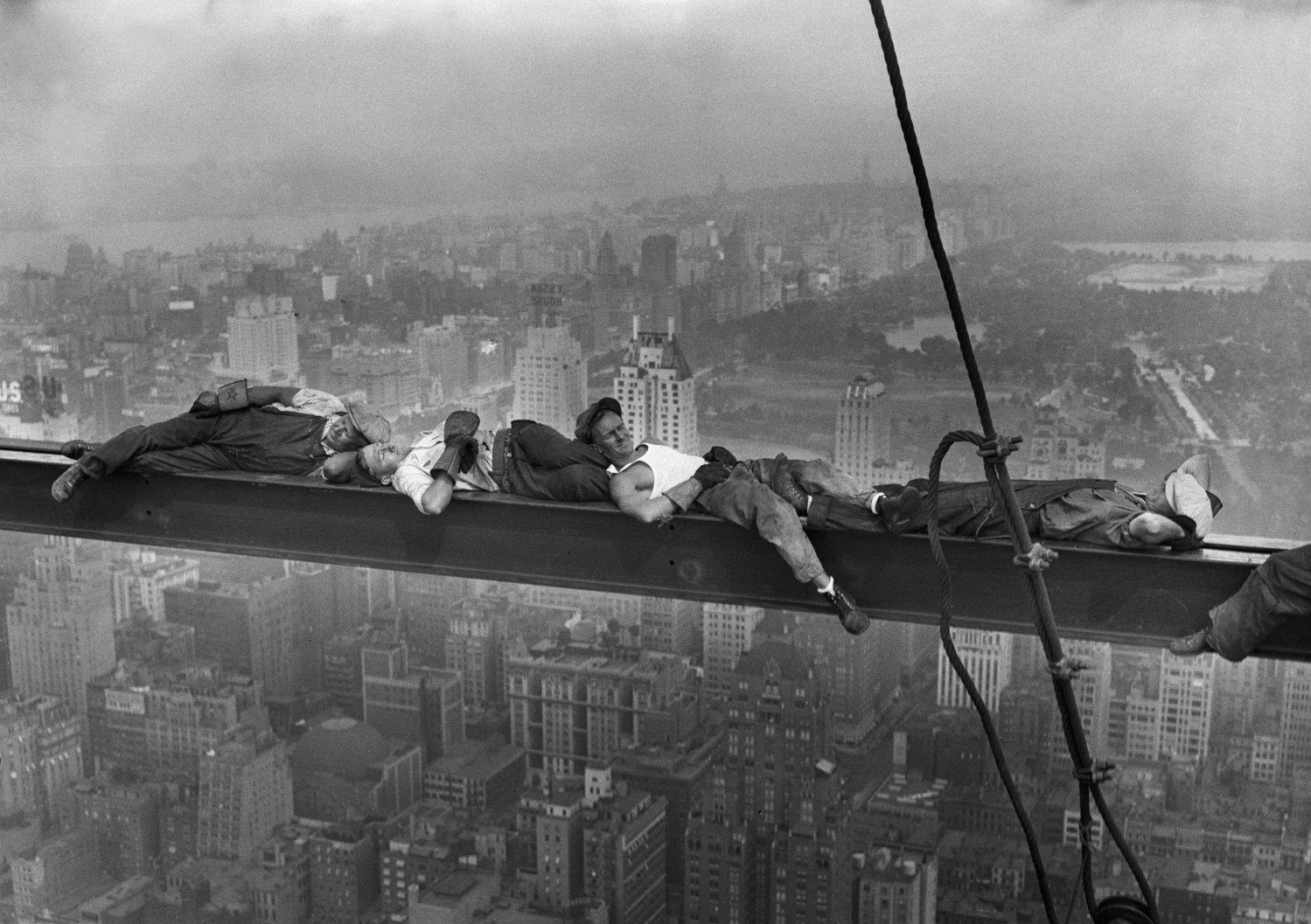 The quest to learn the identities of the workers themselves was similarly fascinating. Like the photographers, their names did not appear on the back of the original image. Identifying the men was made difficult by the lack of official records for any builders.

For many years, potential names were suggested, although these were mainly guesses. It was not until the release of a 2012 documentary that two men in the photograph could be named.

The film entitled Men at Lunch explored immigrants' impact on 1930s New York and, in particular, their appearance in Lunch atop a skyscraper. Through working with the Rockefeller Center's archivist, director Seán Ó Cualáin identified two men in the photograph. The man third from right was Joe Curtis, and the man third from left was Joseph Eckner.

While making the documentary, the director received evidence from men in Ireland claiming to be descendants of two workers. According to them, the men on the far left and far right of the picture were Irish immigrants.

There have been other suggestions that Swedish, Spanish, and Slovak immigrants are present in the photo. However, beyond Curtis and Eckner, it is hard to find proof of the other nine workers' names. 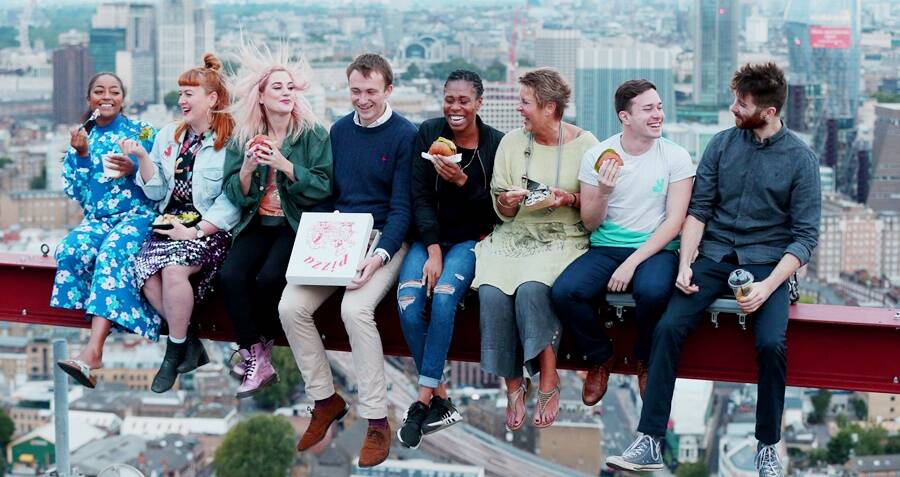 For such a critical historical moment, lunch atop a skyscraper lacks lots of crucial information. It is a shame that the men in this iconic piece of art, who helped shape New York, never received the recognition they deserved. 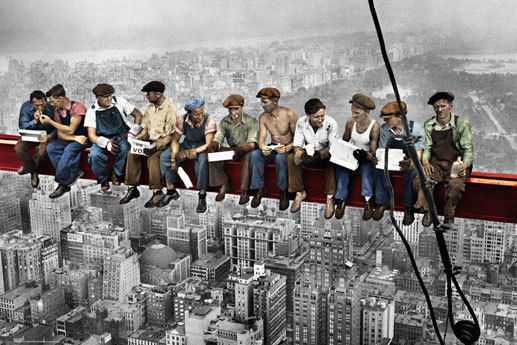 The names and stories of most of the men have been lost. However, their faces have been etched permanently into the history books so that future generations will never forget them.