Lady Gaga, who had just lost out on the Grammy to SZA, helped her with her dress as she made her way to the stage.

There were many memorable moments at the 64th Annual Grammy Awards, but one particularly warmed our hearts. Yet, it is not as talked about as other incidents involving violence in similar events. 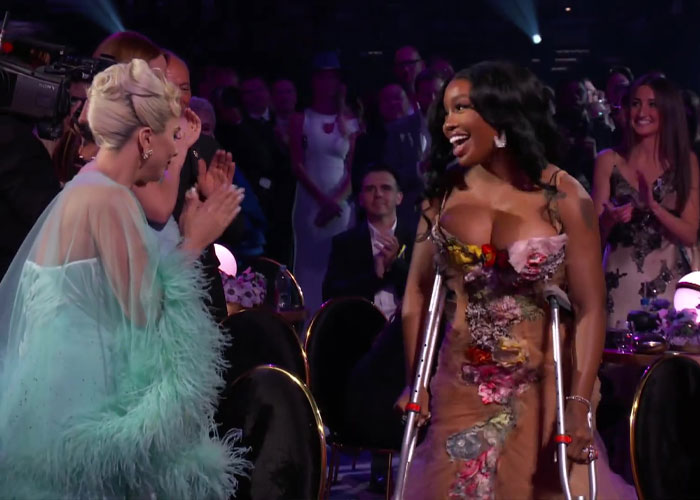 Helping someone in need, choosing kindness, and rising above is not how most celebrities operate. But, Lady Gaga proved she was a lady, and the smile on SZA's face said it all.

Days before the awards, SZA fell and twisted her ankle. She looked gorgeous in a body-hugging Jean Paul Gaultier dress. However, with the crutches, she found it difficult to move, and that's when Gaga stepped n.

SZA and Doja Cat won the Best Pop Duo/Group Performance for their song Kiss Me More.

Gaga Bent Down To Help With SZA's Dress 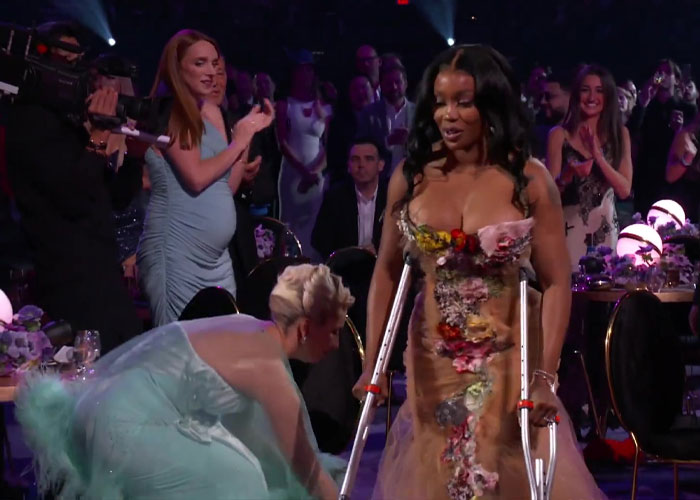 Like a true angel, Lady Gaga, nominated in the same category for I Get a Kick Out of You with Tony Bennett, bent down to carry the dress' train.

After the show, SZA told E! that she tried to rush to the stage because she didn't want Doja to miss out on her moment. She did not know, or even realize at first, that Lady Gaga was helping her.

Gaga did not want to disturb SZA, so she tried to be graceful as possible.

A Queen Helping A Queen 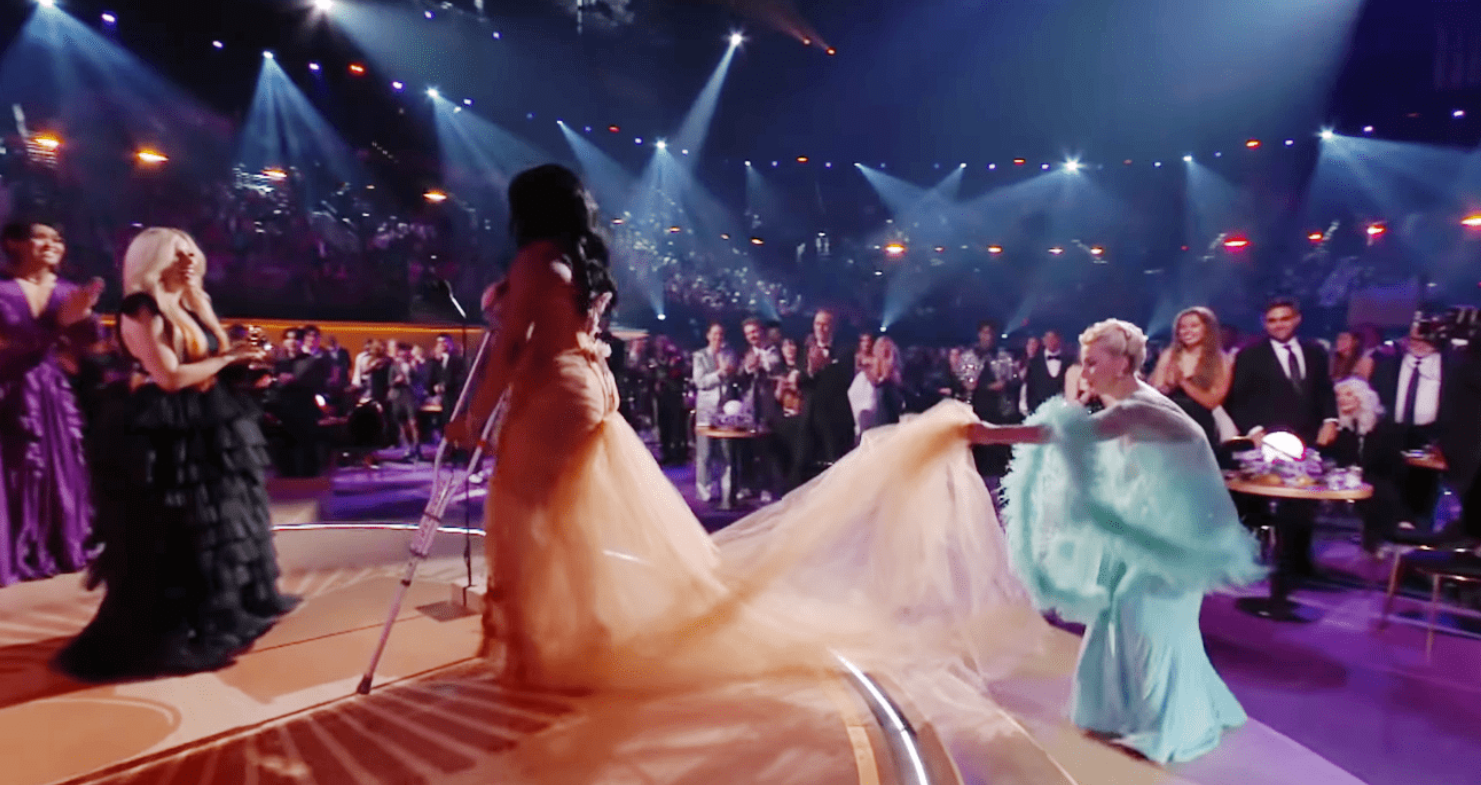 Though it seems like this lasted for hours, it was a mere five seconds. Lady Gaga went back to her seat, and Doja and SZA picked up the award.

However, Doja Cat was almost late, and the two winners made a cute and funny exchange on stage.

SZA called out, "girl, you went to the bathroom for 5 minutes, are you serious?" 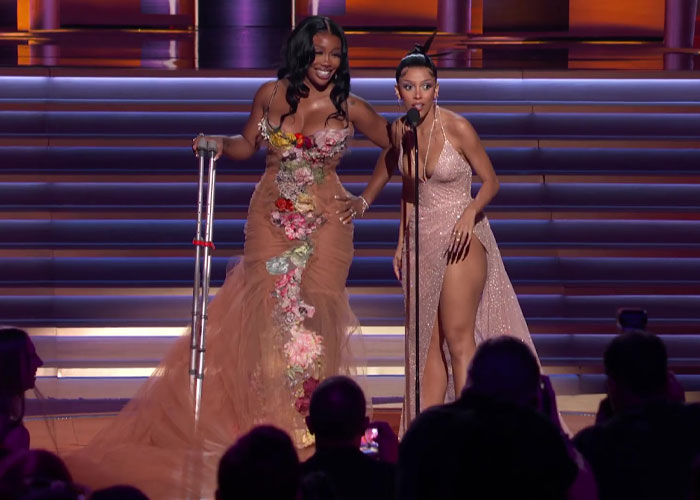 Doja Cat was as honest as it gets, saying, "I have never taken such a fast p*** in my whole life." Both were out of breath, as SZA had to put an effort to get on stage, while Doja Cat was in the restroom when they announced the winners. 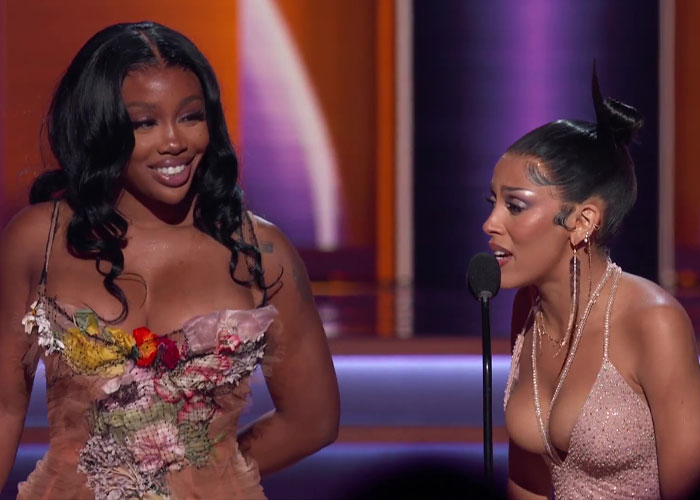 Of course, they were happy, and Doja Cat teared up, making their victory even more touching.

During her speech, Doja thanked her family, friends, and fans, and then she turned to SZA. Doja Cat told her, "you are everything to me. You are incredible. You're the epitome of talent." 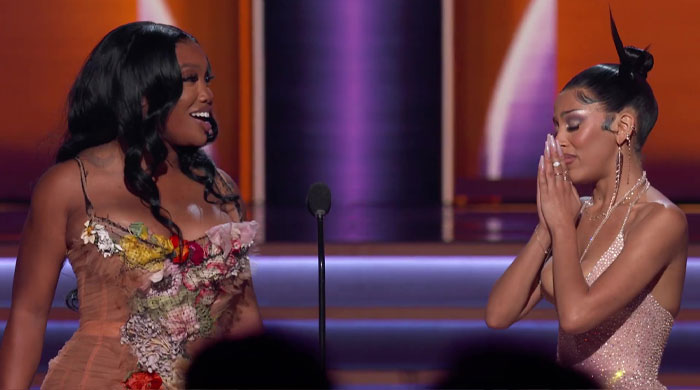 She then begged SZA to say something while she caught her breath.

As SZA gave her thanks, Doja Cat fully embraced emotions, saying, "I like to downplay s***. But this? This is a big deal." 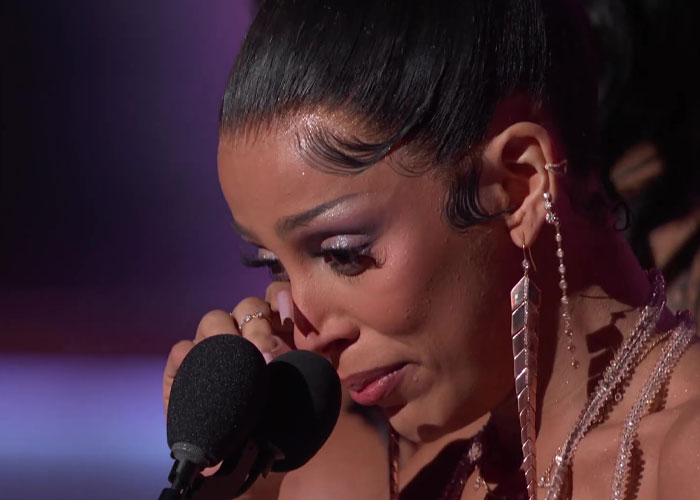 All the kind words and actions only made this year's Grammy show a genuine celebration of kindness, not just music. 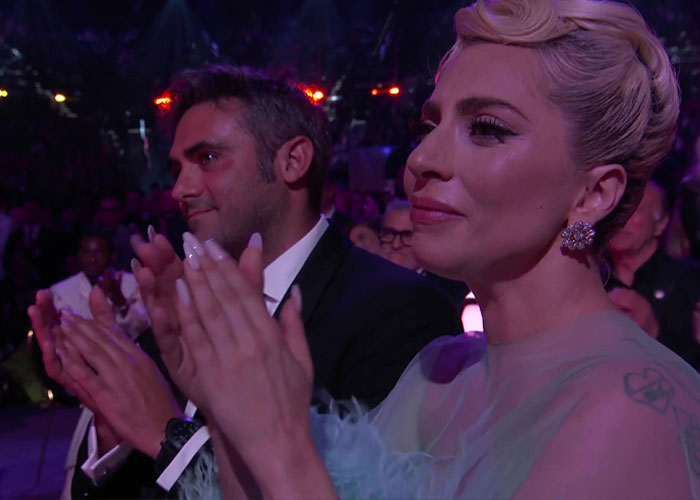 Gaga was not just Cinderella's godmother. She also paid tribute to Tony Bennett, who had to retire last year due to his ongoing battle with Alzheimer's disease. The two made several hits and became close friends.

Lady Gaga also took a Grammy for Best Traditional Pop Vocal Album for Love for Sale. This was her 13th Grammy. 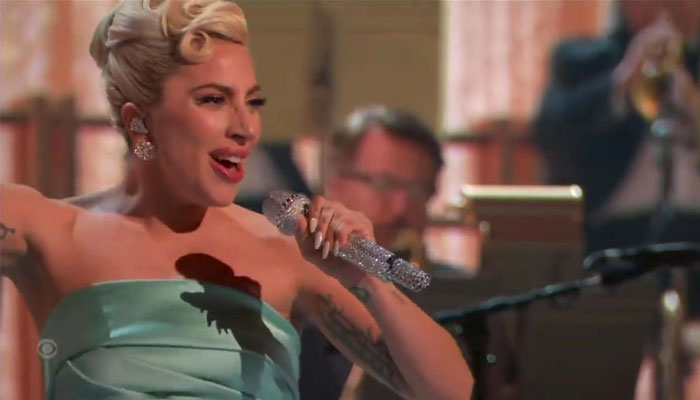 At the end of her performance Gaga said:

The emotional evening continued, and Lady Gaga shared her excitement on Instagram, writing:

"I won my thirteenth Grammy last night, and I cried just like the first time I won for Just Dance."

"Tony and I are so grateful for this honor. I was so proud to be a part of such a beautiful community of musicians where so many people were rewarded for their artistry. Congratulations to everyone for all the awards, and performances, and your devotion to music. And thank you for that standing ovation! You truly lifted my spirits on a night where I truly missed my friend—he would have been so happy that in 2022 everyone stood up for Jazz! I love you!" 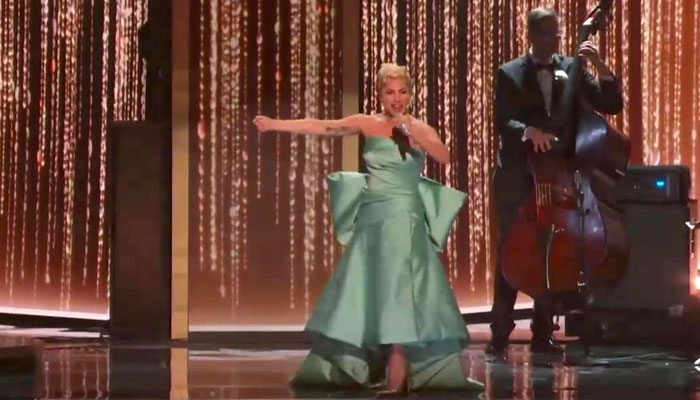 Gaga later corrected herself as she mixed up the songs, clarifying that she won Grammy for Poker Face.

This is not the first time Gaga lent a helping hand to someone in need. 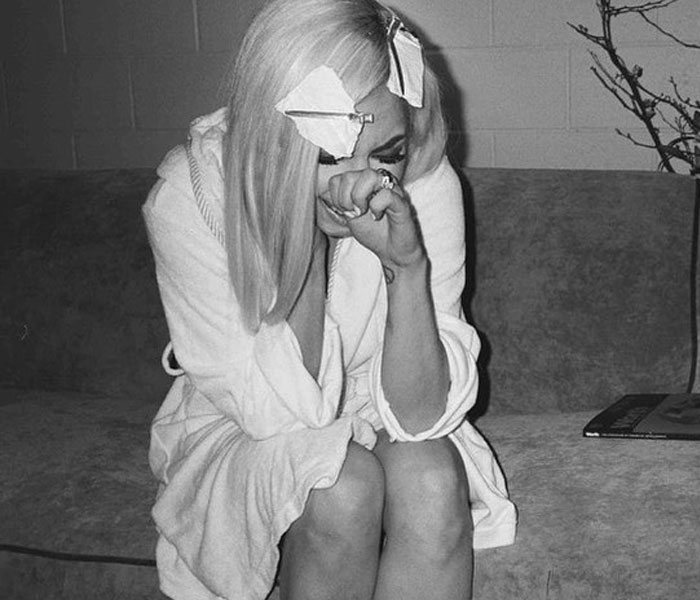 The singer also surprised the world with her kindness during the Oscar Awards.

Lady Gaga And Liza Minnelli At The Oscars 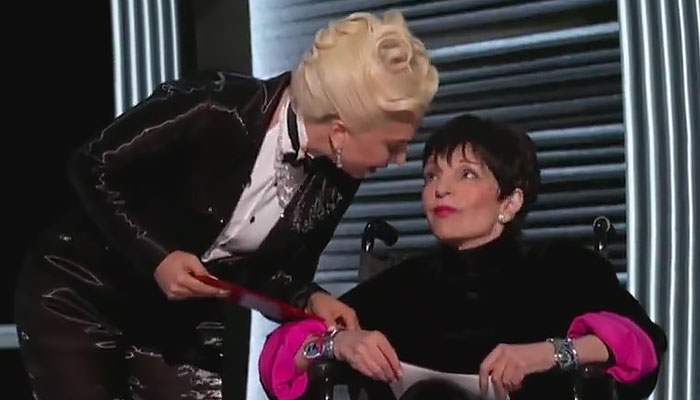 Again, this was a moment for celebration, but it did not gain as much attention due to unkind behavior from some other guests.

During the Oscars, Gaga helped Liza Minnelli as the two were announcing the nominees for Best Picture.

Gaga whispered to the Hollywood legend, "I got you." Liza Minelli responded by saying, "I know, thank you."

Of course, Twitter went gaga over Gaga's acts of kindness.

Here are several people who took notice of how queens support queens: 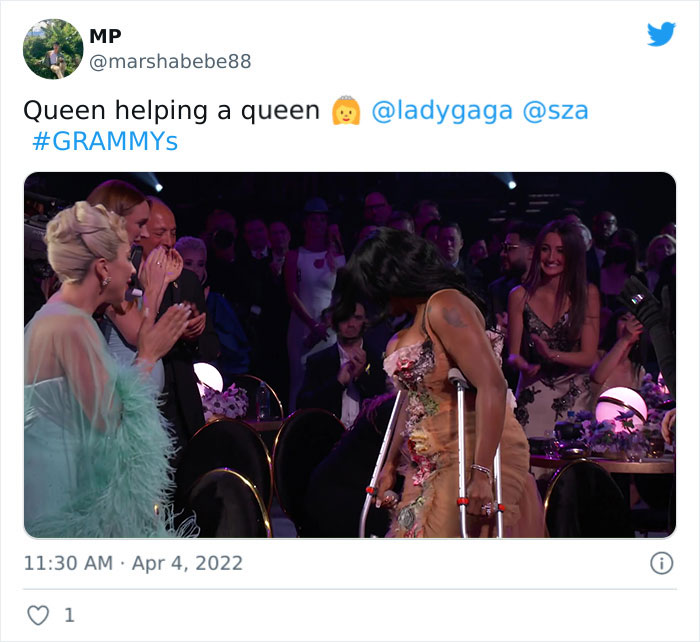 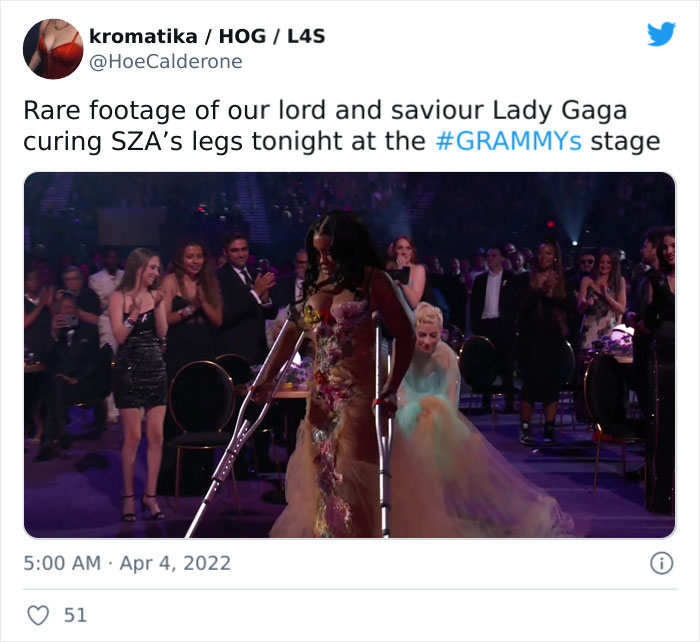