The first thing Rittenhouse has done since he was found innocent of the charges leveled against him has been criticized heavily.

A Few Days Ago, Rittenhouse Was Found Not Guilty However, the verdict was not favored by everybody. Opinions throughout the country and the world are divided on the ruling.

The highly anticipated trial began with opening statements from both the prosecution and the defense. Either side wished to offer its opinion on what took place in August last year.

Kyle Rittenhouse should be convicted for the crimes he committed.

The incident took place during the Kenosha protests on August 25, 2020. Rittenhouse armed himself with a rifle and then entered the streets.

People were protesting after the police shot Jacob Blake.

His Victims Included Anthony Huber, Who Tried To Take Away His Rifle

They’re not showing or discussing Kyle Rittenhouse’s victims much and I think it’s because the kind of people who support him have an easier time doing so when they assume he killed Black people at a BLM protest. These are his victims: Anthony Huber and Joseph Rosenbaum pic.twitter.com/UCOeXw4dsw

During the protests, Rittenhouse killed Joseph Rosenbaum, 36, and Anthony Huber, 26. Huber was shot while he tried to "wrestle" the rifle away from the teenager.

In addition to killing the two men, Rittenhouse also injured Gaige Grosskreutz. He shot the 27-year-old and severed his bicep.

Rittenhouse Turned Himself In The Following Day

It appears he was looking for an opportunity to ambush someone pic.twitter.com/mqvyykn51P

A day after he shot the men, Rittenhouse gave himself up and was put in custody. He was charged with two counts of homicide and one count of attempted homicide.

The teenager was also facing charges of reckless endangering and illegal weapon possession by a person under eighteen.

Both Right And Left Wing Politicians Followed The Case Closely The case was closely followed online by various political camps. To the right, he was a "hero," although some were critical of his actions and called him a "vigilante."

In Court, He Seemed Pretty Calm While in court, Rittenhouse didn't seem too bothered by the charges he was facing. This was apparent in photos taken of him.

As the trial took place in Wisconsin, he yawned on several occasions even though a conviction meant he would be spending the rest of his life behind bars.

Even after yawning during the opening statements, he was also yawning when the jurors got into the courtroom. It seemed that the teenager had a real problem focusing on the proceedings.

His Lawyer, Mark Richards, Argued That Rittenhouse Was Acting In Self Defense

I interviewed the alleged shooter before the violence started.

Even as the teen yawned, his lawyer claimed that he had shot the men in self-defense. Mark Richards also reminded the court of an interview he had on the night he shot the protesters.

In The Interview, Rittenhouse Said: "I've Gotta Protect Myself, Obviously..."

Just in: New motion filed in Kyle Rittenhouse case alleges that 15 days before the shootings, Rittenhouse is on video saying, "I wish I had my f*cking AR. I'd start shooting rounds at them," apparently referencing a group of people he believed were shoplifting from a CVS pic.twitter.com/8whyEQats5

Rittenhouse claimed that he had his rifle because he had to protect himself. The teen also explained he also had his medkit.

He was heard making this revelation before he shot two people dead.

The Lawyer Claimed That The Victims "Attacked Him In The Street Like An Animal..."

In the opening statement of the Rittenhouse trial, his attorney argues he was justified in shooting the victim carrying a skateboard, since it’s possible to decapitate someone with a skateboard if you decide to use it as a deadly weapon. pic.twitter.com/T9ji9VSlpN

His lawyer, Mark Richards, argued that Rittenhouse was attacked. Richards explained that his client protected himself and his firearm to keep it from being taken from him and used against him or others.

According To Richards, Rittenhouse Was A "Scared Kid Who Protected Himself From A Mob"

Kyle Rittenhouse was NOT "a scared kid who protected himself from a mob."

He's a killer who took an AR-15 and drove 20 miles to insert himself into the protest in Kenosha. He had no business there. Rittenhouse is guilty of First Degree Murder. Lock him up! https://t.co/81YjgLVM9y

Although his lawyer argued that Rittenhouse was protecting himself from the mob, the assistant district attorney, Thomas Binger, noted that "only one person killed that night" although there were hundreds of people:

"Only 1 person shot anyone that night."

The district attorney also explained that Rittenhouse was nothing but a tourist in the community. He had traveled there because he was "drawn to the chaos."

On November 10, Rittenhouse Took To The Stand To Give His Testimony 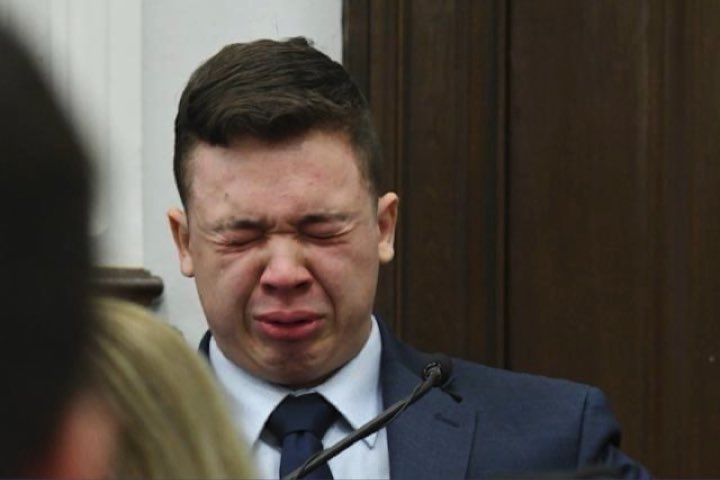 As Rittenhouse gave his side of the story, he got emotional.

Rittenhouse argued that he was in the Kenosha protests to provide medical aid to the protesters.

When asked if he had gone there looking for trouble, Rittenhouse said, "No."

He Confessed He Only Had A Problem With One Man, Who Wanted To Kill Him

Rittenhouse remembered that he had no problems with anyone else that night besides Joseph Rosenbaum. Rosenbaum said to him he would "cut his heart out."

Once the teenager started explaining the details of the shooting, he broke down in tears. The judge had to postpone the trial briefly before he resumed his testimony.

Rittenhouse Claimed He Had No Intention Of Killing According to him, his only goal was to stop those who were attacking him:

"Two of them passed away, but I stopped the threat from attacking me."

"I didn't do anything wrong, I defended myself...he would have stomped my face in if I didn't fire."

Kyle Rittenhouse describes at a homicide trial why he used his weapon during the unrest in Kenosha, Wisconsin in August 2020. pic.twitter.com/HcGPk33iOV

While recounting the encounter he had with Rosenbaum, Rittenhouse said that he shot the man four times before he went to find police officers.

After his lawyer asked him why he went to find the police officers, the teenager explained that it was because he did not do anything wrong and was just defending himself.

One Of His Victims Responded To His Testimony Grosskreutz also gave his testimony. According to him, Rittenhouse was just upset over getting caught.

He was shot in the arm by Rittenhouse during the protests. Grosskreutz also spoke with Good Morning America in an interview following the trial. In the interview, he said that Rittenhouse was a "child" who was doing something he shouldn't have been doing in the first place:

"To me, it seemed like a child who just gotten caught doing something that he wasn't supposed to – more upset that he was caught and less upset about what he had done and what he had taken and the numerous lives that he affected through his actions that night."

To Grosskreutz, "A Million Things" Can Run Through Your Mind When Someone Is Pointing A Rifle At You During his testimony, Grosskreutz revealed that a lot of things go through a person's mind when a rifle is pointed at them. One of those things is a concern for safety.

He also claimed that he is not somebody who takes life and that he had made a life out of preserving and protecting life rather than taking it.

Grosskreutz Explained That His Wound Was Inconsistent With Rittenhouse's Claims

EXCLUSIVE: “To me, he seemed like a child … more upset that he was caught and less upset about what he had done ... and the numerous lives that he affected.” — Gage Grosskreutz, the sole survivor shot by Kyle Rittenhouse, reacts to his testimony. https://t.co/DRURCHHX5R pic.twitter.com/wIKHjbVyH1

According to Grosskreutz, although some people think he was pointing the gun at Rittenhouse, his wound suggests otherwise. In other words, he was saying that he never pointed a gun at the teenager.

As The Trial Came To An End, The State Of Wisconsin Braced For Backlash

WATCH: National Guard Soldiers are on standby in Kenosha, Wisconsin, in preparation for a verdict in the Kyle Rittenhouse case.

The state of Wisconsin knew that there would be backlash regardless of the verdict reached in court. Consequently, 500 National Guard troops were put in place to offer support to Kenosha law enforcement.

According to Governor Tony Evers, the officers were in place to offer support. He also urged everyone to assemble and exercise their First Amendment rights in a safe and peaceful manner.

On November 19, Rittenhouse Was Found Not Guilty Kyle Rittenhouse was eventually cleared of all charges. After their deliberations, the jurors found Rittenhouse 'not guilty' of the five felony counts made against him.

The Verdict Was Incredibly Divisive

I knew it. Kyle Rittenhouse is proof that white people can still break the law, carry illegal weapons, shoot and kill people, and get away with it in America by shedding tears and claiming self-defense.

Some people were very happy with the jury's verdict. However, others were very critical of the ruling.

This only further validates the need to abolish our current system. White supremacy cannot be reformed.

On Twitter, Kaepernick explained that there was a need to do away with "our current system," which catered to white supremacists. Kaepernick is a former footballer.

He is also an activist, and he once knelt during the national anthem as a way to protest against racial inequality and police brutality in the United States.

Soon After Rittenhouse Was Set Free, He Had Something To Say Of The Jury's Decision In An Interview

In a video, Rittenhouse is seen seated inside a car as he says that the jury came to the "correct verdict." He also said: Although Rittenhouse has mostly remained silent, the interview he has given soon after his release has angered many people.

Kyle Rittenhouse will be doing an interview with Tucker Carlson.... is anyone surprised? 🙄

I still feel like this interview, so soon post-trial, is a terrible idea. https://t.co/xzysF9I2oW

Here we go. Reality TV reaches a new low.
Blow people away with an AR-15, get acquitted, then go on @TuckerCarlson to talk about it.
They call that news?

Fox News to interview Kyle Rittenhouse amid protests over not guilty verdict https://t.co/lrz8gOfRcn

Ofc he did an interview lmao

Are we being punk’d?

Tucker Carlson has been filming a Kyle Rittenhouse documentary this entire time, with behind the scenes footage and interviews.pic.twitter.com/6nU0VA2Cuc

In a short preview of the interview, Rittenhouse can be hard claiming that his trial had "nothing to do with race."

Kyle Rittenhouse: "This case has nothing to do with race."

In the clip, the teenager also explained that he was not racist and went on to explain that a change was needed.

It turns out that Carlson has made a documentary about Kyle Rittenhouse's case. The highly controversial interview aired on November 22 on Tucker Carlson Tonight, and it has made a lot of people angry with Rittenhouse.