It seems like Kim Kardashian has had enough of her ex, Kanye "Ye" West, and his endless public antics and attacks on her.

She made this abundantly clear through her Instagram Stories post after the eccentric rapper spoke out against his daughter North West being on TikTok.

North is eight years old at the moment, and Kanye took a screenshot of her TikTok account and asked fans what he should do about his daughter being on TikTok against his will.

After Kim saw the post, she was not happy. She wrote on social media, saying that Kanye's "constant attacks" during interviews and on social media were causing more hurt than the TikTok videos their daughter was creating.

She defended her daughter, saying that she was doing her best to express her creativity but with adult supervision. Kim said she allowed her to do it because it made her happy.

The two share four kids and Kanye has described himself as the "main provider and caregiver." However, Kim has spoken out against Kanye as they struggle to co-parent.

North has had the TikTok account since November, and she has already shared a couple of clips. In January, Kanye had said that his children would not be on TikTok without his permission.

While responding to Kanye's most recent outburst, Kim mentioned that the rapper was not making the difficulties the divorce had caused to their children's lives any easier. Kim accused him of being manipulative.

She also said he was handling things negatively and publicly, which resulted in a lot of pain for everyone involved.

The socialite explained that her wish was to have a healthy and supportive co-parenting relationship because that would be best for the kids. Unfortunately, she lamented that Kanye was making this process "impossible every step of the way."

In her post, she said she wanted to handle the issues about the kids "privately." She was also hoping that he would finally respond to the third attorney he has had in the past year to address their issues amicably. 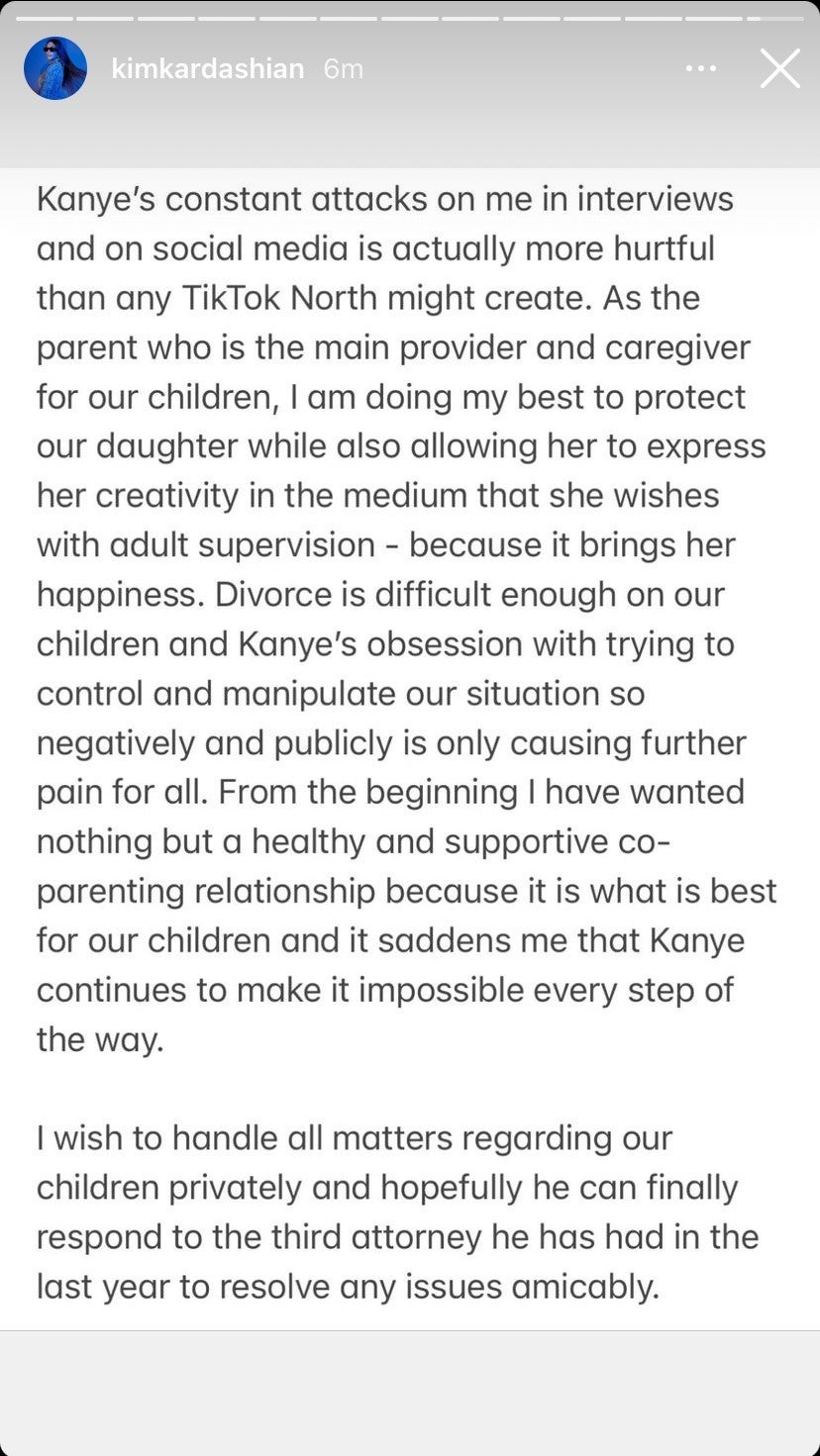 In February 2021, Kim filed for divorce from Kanye West. The two had gotten married in 2015.

Additionally, this is not the first time she has had an issue with how Kanye has behaved since they parted ways. According to the media, she was pretty upset last month due to Kanye's antics after speaking to the press about family matters.

The source also noted that Kim was only concerned about the children and that she was always interested in co-parenting the kids with Kanye.

In addition to North, Kim and Kanye share three other kids: Saint, Chicago, and Psalm, who are 6, 4, and 2, respectively.