Even beyond the grave, Bob Saget continues to amuse many people with his hilarious jokes. John Stamos just shared a photo that pays tribute to the deceased comedian's legacy.

In the photo, Saget can be seen trying to obscure part of Peacock's name as a way to make an obscene joke. The picture was shown on CNN as they discussed his towering legacy.

The cheeky joke goes to show that Saget was a comedian at heart. No wonder people cannot stop remembering his great sense of humor even though he is no longer with us.

Based on the photo, Full House actor John Stamos wrote that, even beyond the grave, Bob Saget still found a way to get in one last "d**k joke." According to the actor, the late comedian may have had a dirty mouth, but he also had a big heart. 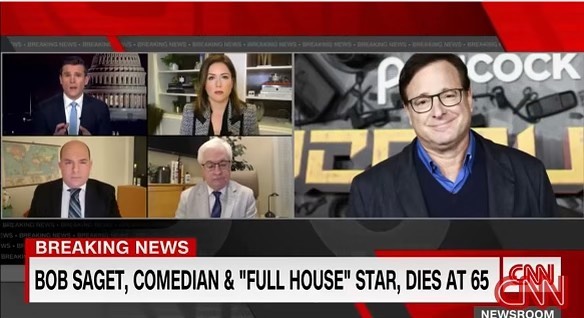 Saget passed away earlier this month at the age of 65. He was found dead in his hotel room in Florida on 9 January.

He had just had a performance when he passed, and he left behind his wife and three daughters.

Stamos has paid tribute to the comedy star before during a joint statement by the Full House cast. He also remembered him through several social media posts and a speech he gave during his memorial.

During the speech, he recalled joining Full House when he was in his early 20s. He later lost his parents, which was a huge hit, and Saget was there for him after his life came crashing down.

Saget even talked at Stamos' father's funeral. Stamos remembers him talking about himself and making many dirty jokes.

The former comedian meant a lot to Stamos, as he has been there for him through many events in his life.

Stamos tried to work in Saget's dirty sense of humor into his speech during the memorial:

"Personally, I hope to die after a beautiful night of lovemaking with my wife, but I'm glad Bob didn't go that way. As I said, I rather he dies after doing what he did best. (Sorry, Kelly). That's the kind of joke Bob loved."

Bob Saget touched the hearts of many with his humor and benevolence.