Edward Jones, a 26-year-old medical student who is also a family man, used to enjoy spelunking with his friends and family. However, during a caving expedition into the Nutty Putty Cave, he met with a terrible fate.

From the age of 4, John spent most of his free time exploring caves. He had even served as a simulated trapped victim for Utah Cave Rescue, a group founded by his father, on more than one occasion. Despite being tall at 6 feet 1 inch and whip-thin, he was flexible and seemed immune to claustrophobia. However, on the fateful day of the incident, luck was not on his side.

The Nutty Putty Cave And John Jone's Love For Caving:

The Nutty Putty cave is located in Utah County, Utah, United States, and is currently owned by the Utah School and Institutional Trust Lands Administration. It is managed by the Utah Timpanogos Grotto. The cave was first explored in 1960 by Dale Green.

As children, John Jones and his younger brother Josh often accompanied their father on caving expeditions in Utah. They were raised to love the underground world and the dark beauty it holds.

John, now 26 years old, was in the prime of his life. He was attending medical school in Virginia while also being married and the father of a 13-month-old daughter. He and his wife Emily had returned to Utah for the Thanksgiving holiday and to share the exciting news that they were expecting another child in June.

It had been a few years since John had gone on a caving expedition, so he decided to take advantage of his relaxing holiday with his family to experience a new level of adventure by going on an expedition into the Nutty Putty Cave. This hydrothermal cave is located southwest of Utah Lake and about 55 miles from Salt Lake City.

What Happened On That Day In The Nutty Putty Cave? 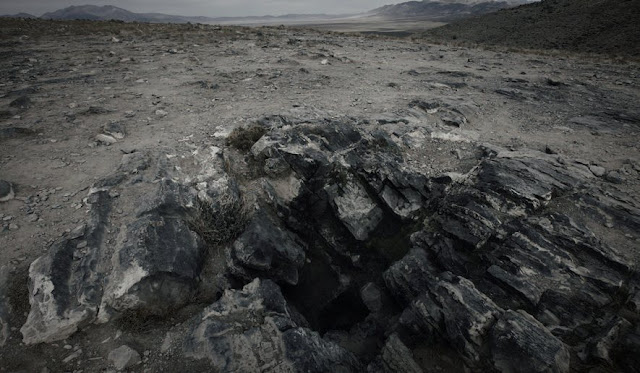 On the evening of November 24, 2009, John Jones, his younger brother Josh, and their nine other friends and family members entered the Nutty Putty Cave, hoping to bond with each other before the holiday. However, things did not go as planned.

John discovered a small cave about an hour into his expedition. He believed it was the Birth Canal, a challenging section of the Nutty Putty Cave that required careful crawling. His curiosity getting the better of him, he began to crawl through the cave's tunnel system headfirst, using his other limbs to propel himself forward. However, as he ventured deeper into the narrow passage, he became stuck and realized he had made a serious error. 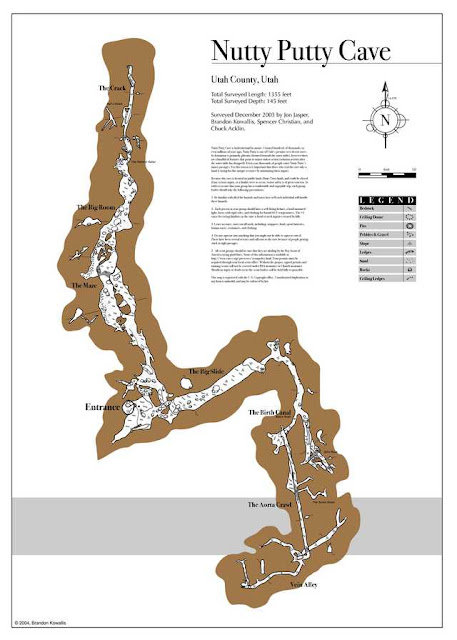 It had been years since John had been in a cave, and he was now six feet tall and 200 pounds. His previous cave exploration experiences were no match for this unexpected situation. He tried to push forward, but the space was barely 10 inches across and 18 inches high, not even enough room for him to normally breathe. 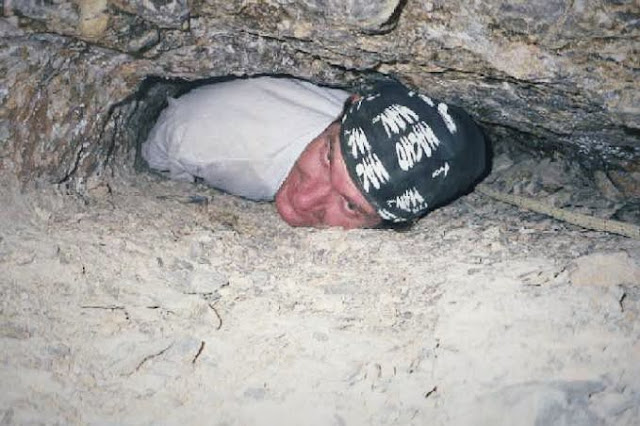 Josh was the first to discover John trapped headfirst in a vertical shaft, with only his feet visible outside the narrow passage. Josh tried to pull him out, but John slid even further down into the shaft. His arms were now pinned beneath his chest and he couldn't move at all. They called for help after this.

The Utmost Efforts To Rescue John Jones From The Nutty Putty Cave: 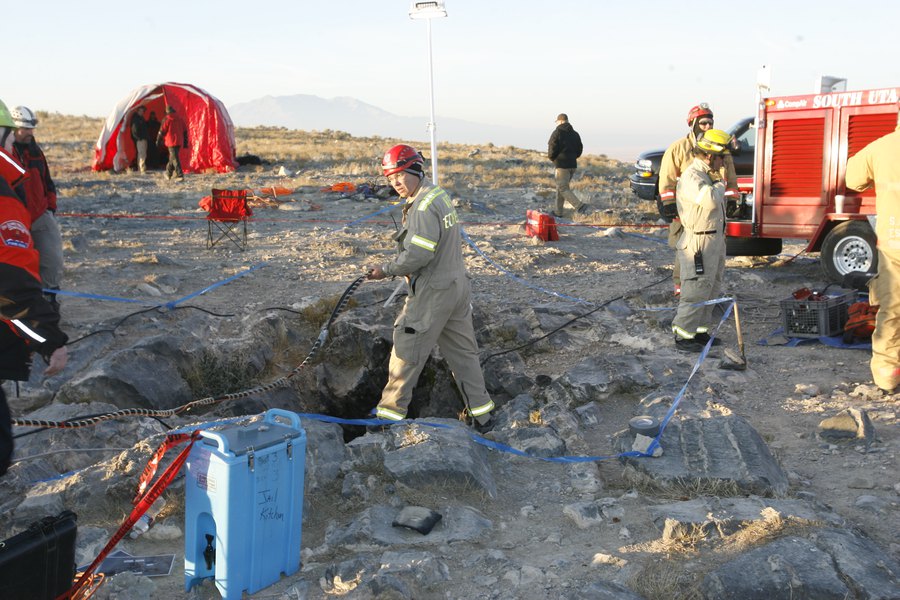 Despite arriving as quickly as possible, it took several hours for the rescuers to get the necessary people, equipment, and supplies down 400 feet into the cave and 150 feet below the Earth's surface where John was still trapped upside down.

It was around 12:30 a.m. on November 25 when the first rescuer, Susie Motola, reached John. All she could see of him were a pair of shoes.

"Hi Susie, thanks for coming," John said. "But I really, really want to get out."

For the next 24 hours, dozens of rescuers worked tirelessly to free John. They even tried using a system of pulleys and ropes to extract him from the tight spot, but due to the unusual angles of the cave, it seemed impossible to do so without breaking his legs, which would have been inhumane. 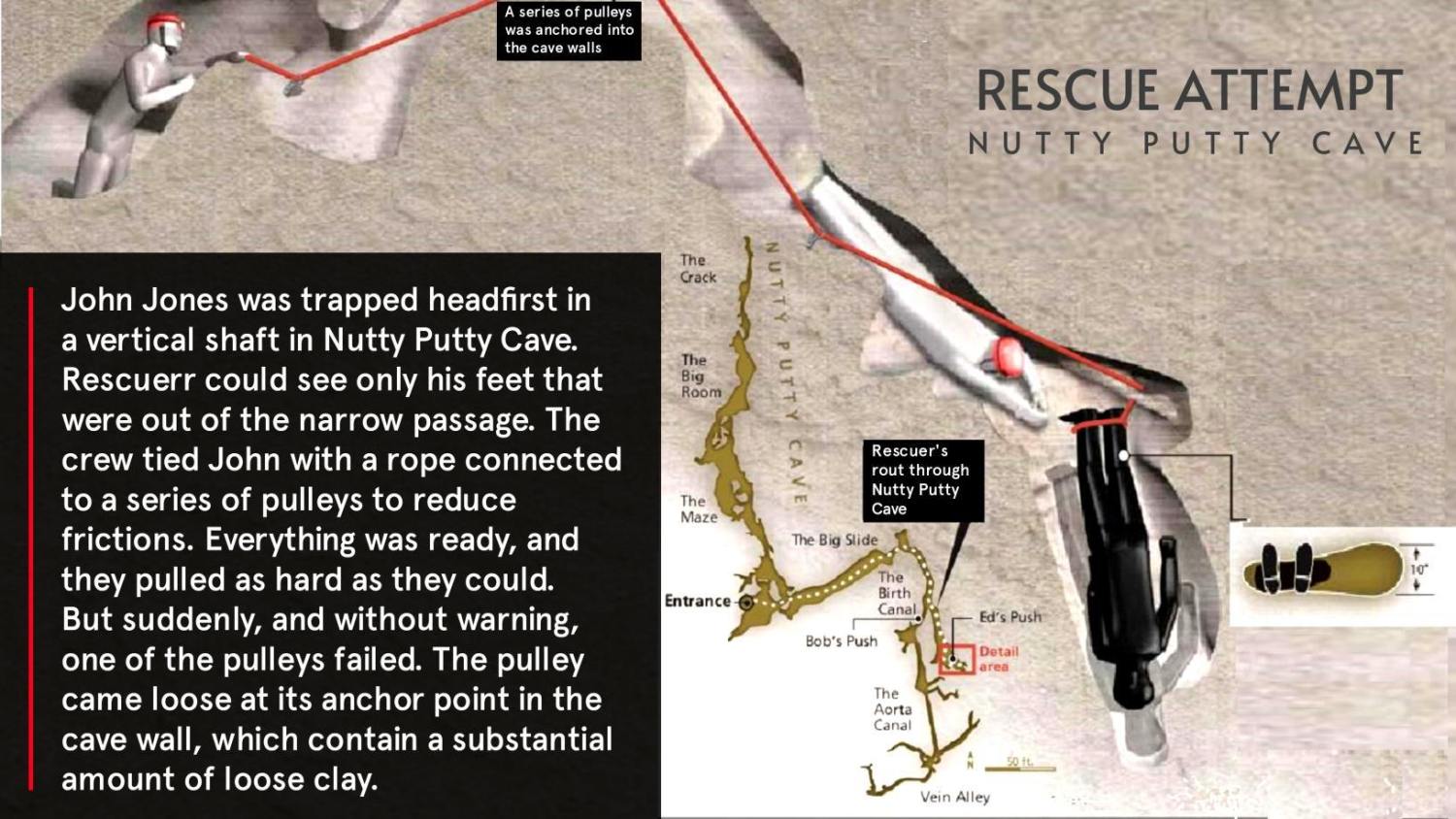 At one point, they managed to get him unstuck and lift him a few feet out of the passage, but a cord snapped without warning and he fell back in again. The pulley operation was now completely unsuccessful and there was no other viable plan to get him out at the moment. However, they remained connected with him at all times and even sang songs to keep him awake.

With no hope of rescue and his heart suffering due to his downward position for a long time (in this position, blood cannot be pumped up to the whole body efficiently and his lungs are not working properly), the rescuers could only give John an injection through an IV drip containing drugs to calm him down.

The Tragic Death Of John Jones In Nutty Putty Cave:

After being stuck in an upside down position for 27 hours, John was eventually pronounced dead from cardiac arrest and suffocation shortly before midnight on November 25, 2009. Despite the tragic news, his family thanked the rescuers for their best efforts.

Here's Why Utah's Nutty Putty Cave Is Sealed Up Now? 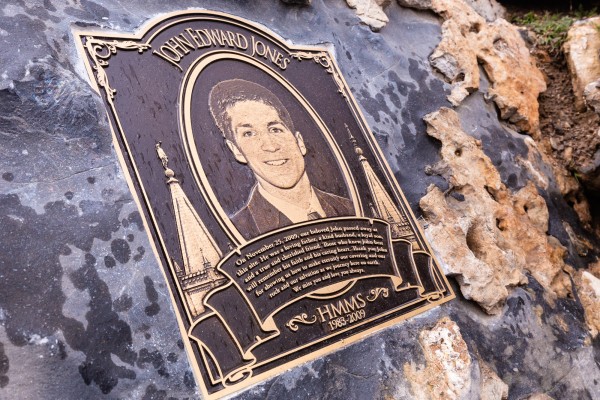 Even after John Jones' tragic death, it was extremely challenging to remove his body from the cave. Eventually, his family and the landowner agreed to seal the Nutty Putty Cave with his body still inside to prevent anyone else from suffering the same claustrophobic fate. The cave was sealed with concrete to ensure that it could not be accessed. Today, the cave is often referred to as the "John Jones Cave" out of love and respect for the deceased spelunker, John Edward Jones.

Did Nutty Putty Cave Have Any Dark Past?

Despite attracting thousands of visitors annually who were interested in caving, John Jones was the only fatality at Nutty Putty Cave.

However, many experienced cavers argue that the narrow entrance and even more cramped and twisty passages of the Nutty Putty Cave make it extremely difficult to explore.

There was another notable incident at Nutty Putty Cave in 2004, before John Jones' death. At that time, two Boy Scouts almost lost their lives near the same location where John later died. Both Boy Scouts ended up trapped within a week of each other, and it took rescuers over 14 hours to rescue one of them.

The Last Descent – A Non-Fiction Movie Based On The Nutty Putty Cave Tragedy:

In 2016, filmmaker Isaac Halasima produced and directed a full-length feature movie called "The Last Descent" that documents the life and failed rescue of John Edward Jones. It provides an accurate portrayal of John's ordeal and what it feels like to be trapped in a narrow cave passageway when claustrophobia and hopelessness set in.

Hannelore Schmatz, The First Woman To Die On Everest And The Dead Bodies On Mount Everest