A husband who may be considered one of the pettiest individuals in the world publicly admitted to creating a spreadsheet to record all instances when his wife refused to engage in sexual activity with him.

He even went so far as to email this spreadsheet to his wife while she was in a taxi on her way to the airport for a work trip. The wife shared on Reddit that she was agitated upon receiving the email from her husband and that he has been ignoring her calls and texts since sending it. 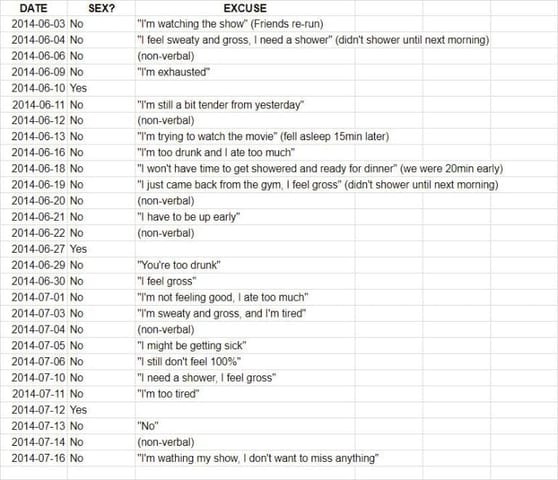 1. The Couple Had Been Together For Five Years At This Point

The 26-year-old woman shared that she had been in a relationship with her husband for five years and had been married for two. They had recently purchased a home together and had been focused on renovations and managing work stress and other responsibilities.

2. She Also Had Some Body Confidence Issues

The wife mentioned that she had gained weight over the winter and had been working hard at the gym to lose it. While her weight should not affect her husband's love for her, it is possible that the wife did not feel as confident or attractive as usual.

3. Her Husband Sent The Spreadsheet To Her Work Email

The original poster (OP) mentioned that her husband had never contacted her at work before and that they typically communicated in person or via text. She was surprised to receive an email from him, which contained a sarcastic message saying that he would not miss her while she was away for 10 days. Attached to the email was a spreadsheet listing all the times the husband had tried to initiate sex since June 1st, along with a column for the wife's "excuses," which included verbatim quotes of why she did not feel like having sex at that moment. The OP expressed shock at the behavior of her husband.

4. This Guy Has Serious Problems

The husband not only saw it as acceptable to keep a spreadsheet about their sexual activity, but he also included precise details such as the exact dates and the exact words the wife used to decline his advances. This is surprising and unacceptable behavior.

5. Obviously, OP Was Incredibly Upset By This

The wife attempted to call her husband multiple times after receiving the email, but he did not answer. Even after she arrived at her destination, she tried calling and texting him to discuss the issue, but he did not respond. This was unusual behavior for her husband, as he had never intentionally ignored her attempts to communicate before. The wife spent the evening in her hotel room, waiting by the phone and eventually crying herself to sleep. This situation was extremely distressing for her.

6. It's Unclear What Ended Up Happening Here, But I Hope She Filed For Divorce!

It is clear that this husband is not able to be a supportive and understanding partner. The wife should consider ending the relationship.