32-year-old Steven Mineo was found dead by authorities in his apartment. He was shot in the head by his girlfriend, 42-year-old Barbara Rogers.

Sadly, he was not the first member of Sherry Shriner's cult to die under curious circumstances.

Rogers had called the police to report that his boyfriend had a gun. He had told her to press the trigger while pointing at his head.

Mineo wanted to die due to Sherry Shriner's cult, which had destroyed his life. Shriner described herself as the "Messenger of the Highest God."

Shriner considered herself a Christian, and she mainly believed in the book of Revelation, which she thought was open to various interpretations.

She believed in a New World Order that was working together with demons, zombies, and other evil beings to take over the world.

Before starting a Facebook page, Shriner spread conspiracy theories about an alien-reptile cult in the 2000s. In the end, she had a YouTube page with more than 20,000 subscribers who were committed to exposing "shape-shifting" political figures.

Sherry Shriner was devoted to brainwashing her cult's adherents into putting their faith in venomous reptiles. She also managed to make them turn against each other. 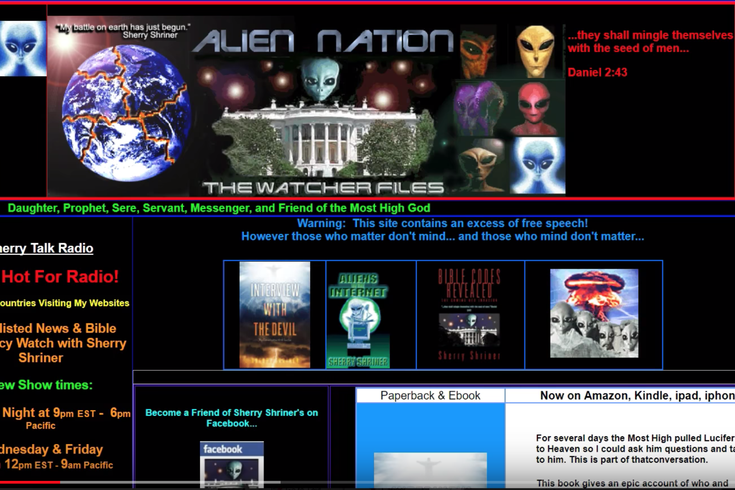 Sherry Shriner was born in Cleveland, Ohio, in 1965. She went to Kent State University, where she graduated in 1990 with a degree in Journalism, Political Science, and Criminal Justice.

Over time, she started believing in a New World Order and saying that many people like Queen Elizabeth II and Barack Obama were shape-shifting lizards. As far as she knew, these people served alien overlords whose endgame was world domination.

These politicians' purpose was to establish a "one-world" government.

Thanks to Facebook and YouTube, Sherry Shriner got a vast audience to teach her strange theories. She saw herself as a "Servant, Prophet, Ambassador, Daughter and Messenger of the Highest God."

She also wrote several books and created a lot of YouTube videos. Shriner also launched over ten websites through which she got even more followers.

Shriner claimed that about 90 percent of the people we knew as celebrities, news announcers, and people in commercials were clones of synthetic robots. Sherry Shriner persuaded Kelly Pingilley, who was just 19 at the time, to forget about college and work as a transcriber for her radio show, Aliens in the News+. Pingilley was told that this was a better way to spend her last days on Earth.

On December 28, 2012, Pingilley's body was discovered. She had died after taking 30 sleeping pills.

She also had a pendant that Shriner promoted as a way to overcome clones and "synthetic robotoids." Following her death, Shriner was more than happy to sell copies of her pendant on the internet.

After her death, her cult claimed that the "NATO death squad" was behind her death because she was a "Yahuah" believer. According to the cult, "Yahuah" was the only true God.

This was also an opportunity for the cult to teach its followers to be more determined in their fight against world domination. 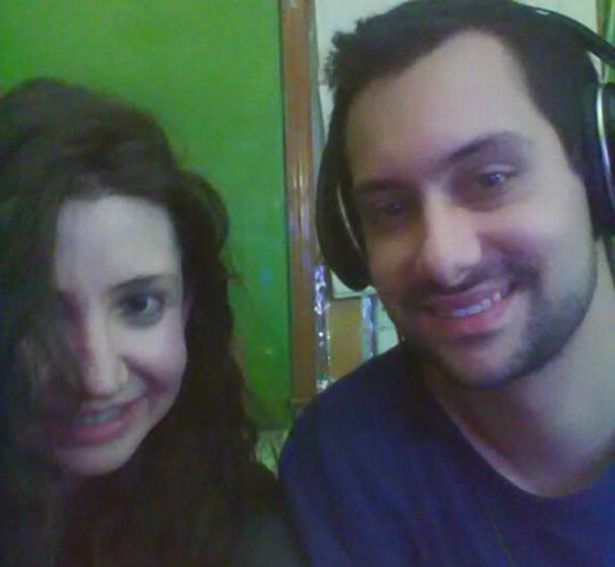 When Pingilley died, Mineo was still a huge supporter of the cult, joining it in the early 2000s.

He believed that Sherry was a prophet of God and believed what she said about alien reptiles that had come to take over human bodies and impose their own will on humanity.

Nevertheless, it did not take long for him to lose interest in Sherry Shriner's teachings.

Steven Mineo and his girlfriend Barbara Rogers had a falling out with Sherry Shriner after Rogers posted a Facebook post in which she talked of her love for raw meat. Following the acknowledgment, Shriner started telling her she was inhuman.

According to Shriner, people who craved raw meat had a "vampire demon" in them. She also said those who crave raw meat also crave blood.

Things escalated from there, and Mineo uploaded videos between May 29 and July 1, 2017, saying Shriner was a fraud. He was determined to expose her.

Shriner and her followers decided to cast the pair out of the cult, and they started to refer to Rogers as a "Vampire Witch Reptilian Super Solder."

After the falling out, it appeared that Mineo and Rogers were moving on with their lives. Nevertheless, on July 15, 2017, Mineo and his girlfriend, Rogers, went to drink at a local bar and drank until 2 a.m. before they went back to their apartment.

While there, he went with Rogers in the woods to shoot his gun. After they went back to the house, he allegedly asked her to shoot him in the head. 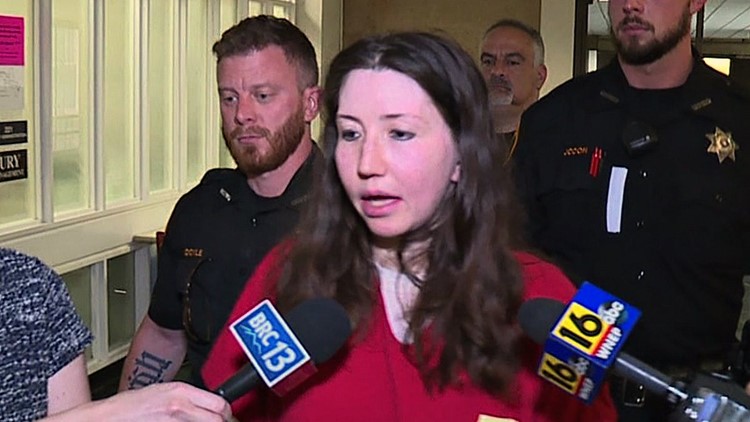 The police were called at 2.25 a.m on the day Mineo was shot dead. A .45-caliber Glock pistol was beside his body when they got to the scene. There was a hole in his forehead.

Rogers was arrested and taken to the Monroe County jail even as she insisted that Mineo had forced her to shoot him.

While in jail, she contradicted herself when she said that she had no idea the gun was loaded. When she was offered a plea deal, she turned it down.

She was given a chance to plead guilty to third-degree murder, for which she would have gotten about 10 and 15 years in prison.

In the meantime, Sherry Shriner started saying that Rogers had "morphed her huge teeth out." She had shown her inhuman shape.

She also posted several videos about Mineo and his death and what she thought of Rogers.

Shriner pleaded with her followers to donate to the cause and started a GoFundMe campaign to help deploy "Orgone blasters." She treated the death as an opportunity to make money and sold the Orgones for up to $288 each.

Rogers was tried in March 2019 and was found guilty of third-degree murder on June 10. She was imprisoned for 15 to 40 years.

She was acquitted of the more serious charge of first-degree murder, for which she would have spent the rest of her life in prison. The judge noted that the cult had immense control over her, her then deceased boyfriend, and the rest of her devotees.

At some point, Rogers argued that she was under the influence of the alien reptile cult when she committed the murder. She defended herself, saying she had no control over what happened:

"I was not the dominating party in that situation."

She found it strange that her boyfriend could put a gun to his head and cause his death, only for her to be found guilty.

Meanwhile, Mineo's aunt, Jackie Mineo, felt that Rogers had gotten off easy. As far as Jackie was concerned, Rogers was guilty of first-degree murder.

Steven Mineo's mother, Donna Mineo, was even more frustrated with the judgment:

"What happened to my son is permanent. Her sentence should be permanent. It was totally unfair." 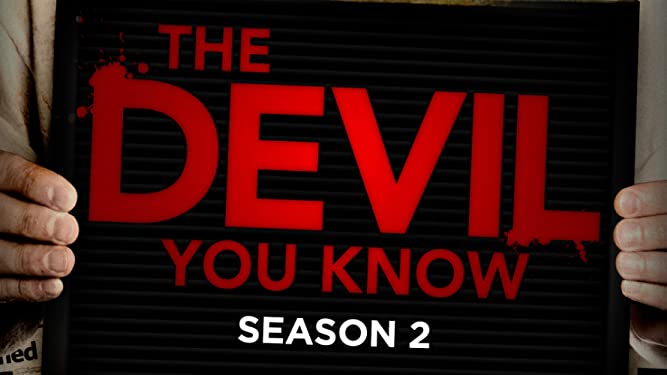 Sherry Shriner died on January 28, 2021, of a heart attack. Following her death, many of her followers mourned her through touching posts on the internet.

She liked to insist that she did not run a cult and that people had the freedom to listen or ignore her. Shriner also said she had no membership rule.

The activities of Sherry Shriner's cult were explored in The Devil You Know, a six-part documentary series. The show took a deep look into the murder of Steven Mineo and the suicide of Kelly Pingilley.

Barbara Rogers' appeal was rejected in 2019 by the Pennsylvania Superior Court. Her case was featured on Deadly Cults on Oxygen.