Controversial vegan activist Tash Peterson was threatened by a horse-and-cart driver just a few days after moving to Melbourne. He threatened to beat her to death with her camera for filming him and his horse without his consent.

The 28-year-old activist moved to Melbourne, from Western Australia, with her boyfriend. Before relocating, they had vowed to continue frustrating the lives of meat eaters, steakhouses, and even supermarkets in their new city. They were both protesting when this incident happened.

Leading to the threat, Peterson berated the driver, calling the practice of using horses to pull carts "animal slavery," "barbaric," and "animal abuse."

She filmed herself talking down on what the man was doing, and he asked, "I hope you are not filming my child?" before adding, "If you do, I'll beat you to death with your camera." In response, Peterson denied filming his children and said: "We are filming animal slavery and exploitation. How can you defend this? Can you not see how sad and depressed they are? These animals should be free." 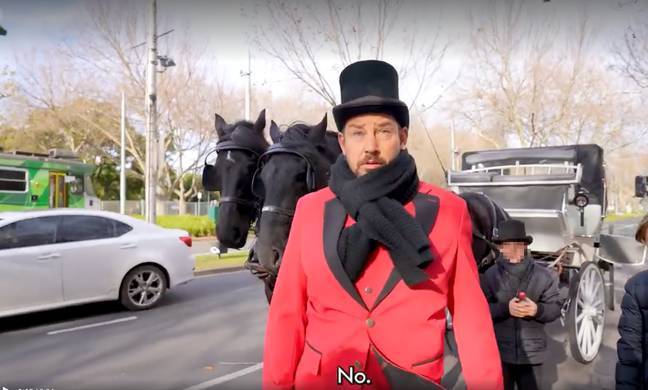 She added that he should be ashamed of himself as he rode away. She wrote on Facebook:

"Regardless of how well 'loved' and 'cared' for a nonhuman animal is, using them as a vehicle and commodity is immoral. They are not slaves or machines and do not consent to being exploited as a vehicle for a human's pleasure. Stop supporting animal slavery by living vegan."

Is Driving A Horse-Drawn Carriage A Crime?

After a massive public campaign, horse-drawn carriages were banned from Melbourne CBD. Although they have been on the streets for a long time and are an exciting sight for tourists, many people have expressed a desire to have them removed.

These resulted from horrific incidents involving alleged animal abuse, usually occurring when the horses collapse. Their drivers are allegedly seen forcing them to get back up and continue walking even when the animals' distress is evident.

According to the Herald Sun, the Premier of Victoria, Daniel Andrews, has adjusted road rules so that these attractions don't operate. The transport minister, Ben Carroll, stated that the "ban is a result of the safety risk posed by horse-drawn carriages to pedestrians, motorists, and commuters transversing the city."

While animal rights activists have been "calling for a ban on carriage horses out of concern for horse welfare and animal cruelty," the decision was not influenced by their concerns. Horse-drawn carriages will still be allowed to operate on the city's outskirts.

The Onlyfans star must have been trying to do her part as an animal activist when she made the video below. She protested only a few hours after arriving in Melbourne last Wednesday.

She told the Herald Sun: "I'll definitely hit up a steakhouse and some supermarkets. I'll take my activism to the next level as time goes by, and I'm willing to break the law if it brings more attention to my message, so there might be a bit of law-breaking in the future."

She intends to target fast foods, high-end fashion chains, football matches, and supermarkets for her protests.

For her first protest in Melbourne, she held a demonstration against the wool industry in CBD. She wore a white bathrobe with red marks on her face to raise awareness about sheep being "exploited and murdered" in the wool industry.

Later that day, she and two other females were seen topless at Melbourne's main shopping precinct, carrying placards condemning the use of wool.

Peterson believes that the people of Melbourne are more receptive to her message than those in Western Australia, where she was met with more hostility.