Between 2007 and 2017, Hong Kong's GDP increased by 78%, and this increase seems to have no end in the short term. Yet hundreds of Chinese are forced to live in low-budget housing known as Hong Kong cage houses. Why? The price of accommodation is 20 times higher than the annual salary.

In Hong Kong, one in five inhabitants lives in extreme poverty. With almost 7,5 million inhabitants, this figure triggers the alarms of human rights activists. More than 200,000 people, including 40,000 children, live in inhuman conditions.

Hong Kong cage houses are tiny apartments often inside old buildings in districts like Sham Shui Po, Mong Kok, To Kwa, and Tai Kok Tsui. They are "homes" where you have enough space for a bed, a table, and a few belongings. 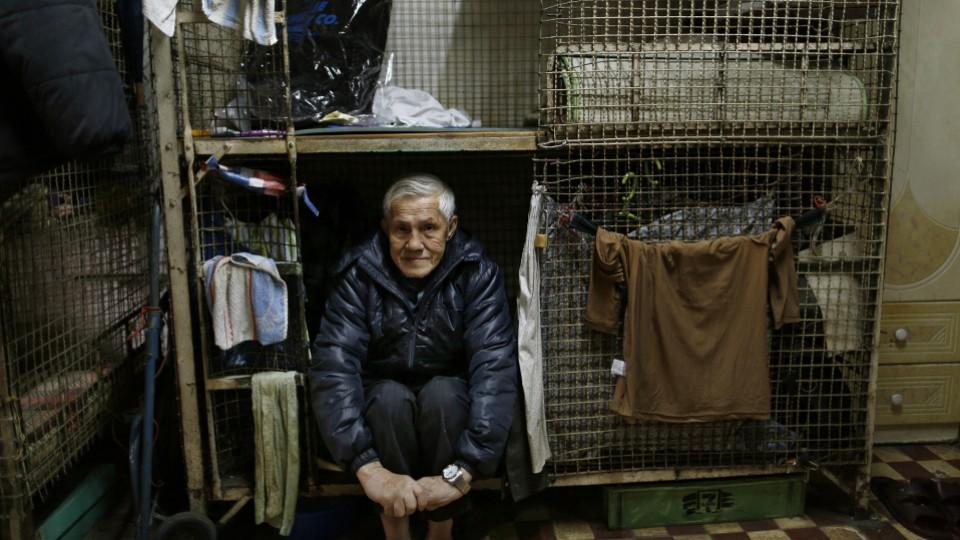 Hong Kong cage houses are subdivided apartments where only the basics can be stored. Usually, it is a bed and some clothing.

Typically, these spaces are 9 square meters, only slightly larger than a jail cell. These houses are also called "coffin houses" since they are made of wooden boards instead of metal.

A place of 35 square meters can be divided enough to house up to 20 double-deckers. The space reaches an absurd 1.8 x 0.7 meters. 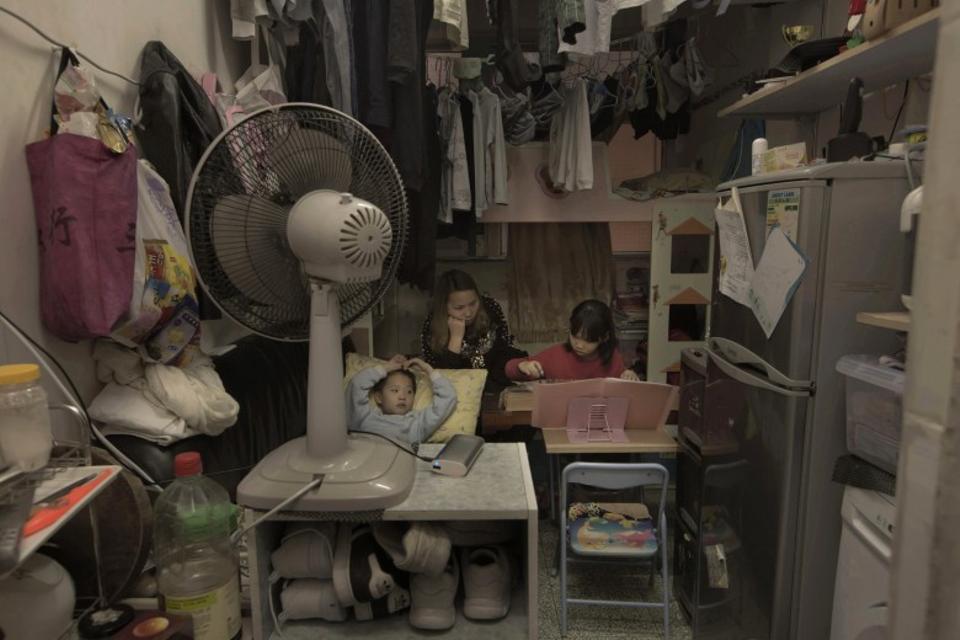 As expected, all coexistence ritual is done just meters from a stranger: cooking, sleeping, dressing, even watching television. The divisions were made with improvised walls or removable screens.

It is expected to share a bathroom among more than 20 people. There are no kitchens either, only small plug-in stoves due to the limited space.

Families of up to four people manage to turn their Hong Kong cage house into a kitchen, bedroom, bathroom, and laundry room.

Most Expensive Real Estate In The World In addition to the concern about the lack of social distancing within these illegal Hong Kong cage houses, there is also the anxiety of being able to pay the rent for the rooms. After all, China is one of the most expensive countries to buy homes or rent rooms. The median home price in 2019 was $1.2 million.

On the other side of the coin, China is presented internationally as a country with a stable financial flow, where people live in comfortable, luxurious apartments, almost touching the sky.

But everyday reality widens the gap of social inequality in the country. In 2019, a series of riots happened that increased real estate prices, among other things.

In addition to how children, young people, and the elderly live, a decline in mental health is experienced by everyone. 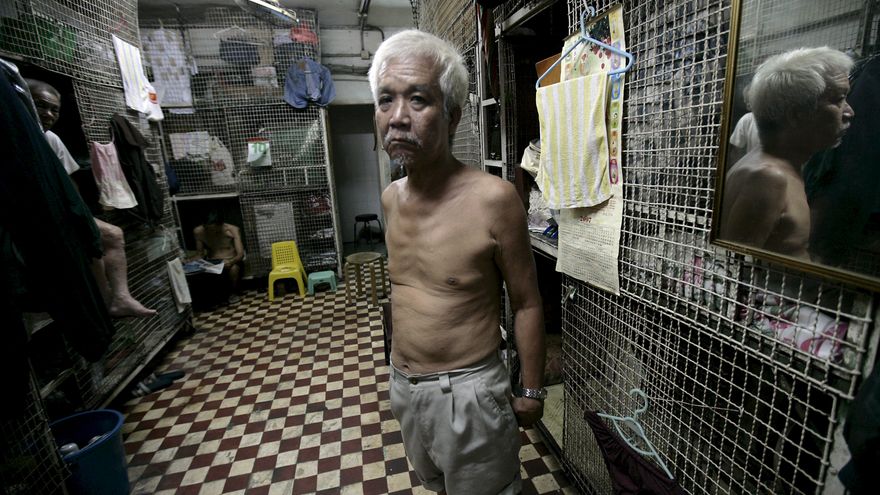 Hong Kong cage houses appeared during the 1950s and 1960s, especially after the Chinese Civil War.

Many Chinese had to emigrate to Hong Kong, causing its population to grow by leaps and bounds. Because of this, the Hong Kong government was forced to start building new facilities, which were so low-cost that they became popular with new migrants.

To this day, many people still live in these tiny apartments. This is mainly because of Hong Kong's Basic Law, which stipulates that you must wait up to 7 years to become a permanent resident. 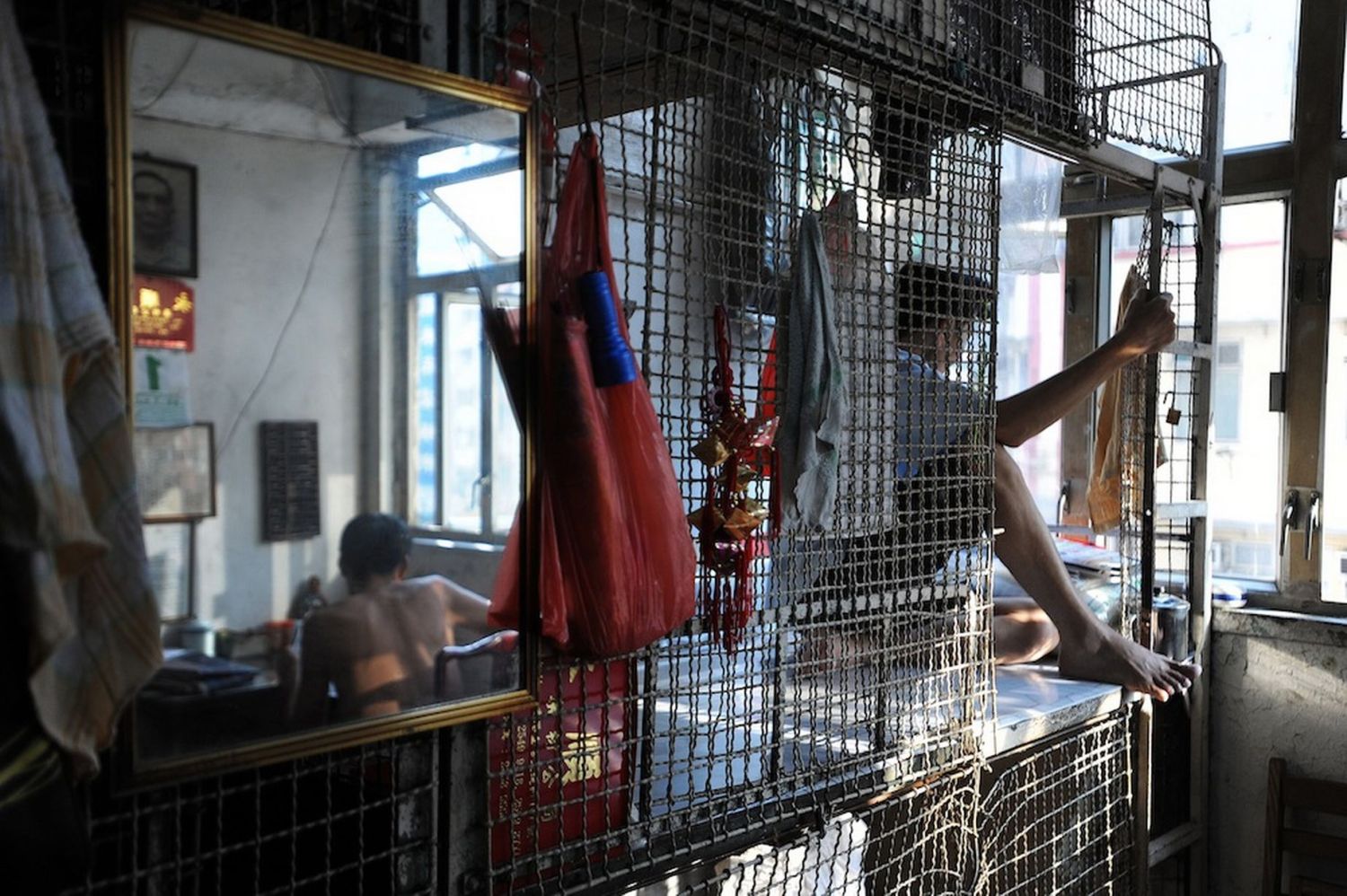 The main characteristic of Hong Kong cage houses is that the interior space is divided into multiple sections where there can be one or two beds. More than 12 people live together and must share the bathroom and the kitchen.

Being such low-cost apartments, they are usually inhabited by people who lack money. These are primarily young people, students, drug addicts, and families with financial problems.

Whatever the type of person, they will all have to face the harsh reality surrounding them. The spaces are dark and narrow, with temperatures around 34ºC. 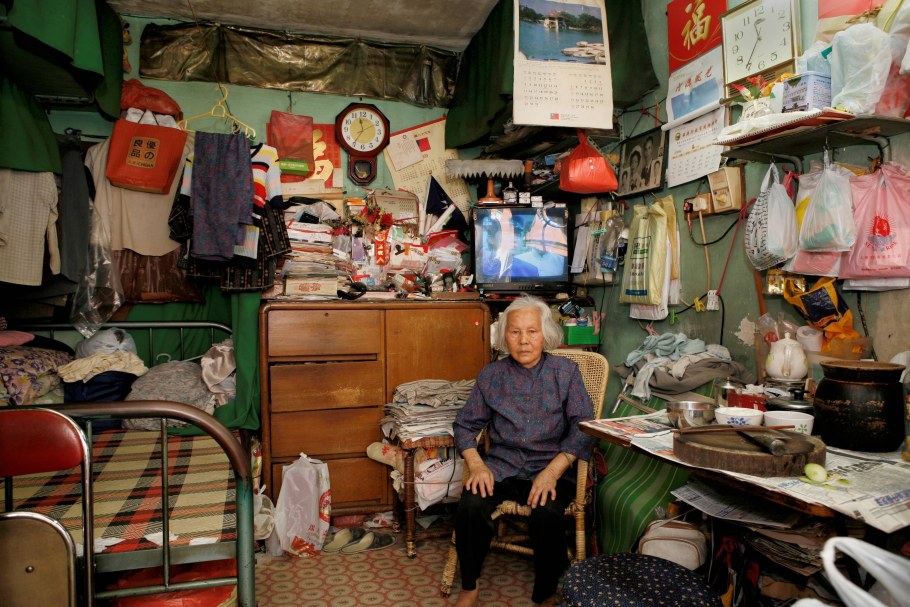 There is dirt, foul odors, flies, cockroaches, bacteria, and viruses. A lack of ventilation causes many respiratory difficulties.

Psychological problems are also present in Hong Kong cage houses since most residents are victims of poverty. Living in such a dilapidated, isolated, and reduced place can lead to a higher decline in mental health.

Although these Hong Kong cage houses are advertised as low cost, it is estimated that the rent for a single one is around $267 per month.

The Other Side Of The Coin In the Central district, illuminated by the neon signs of Prada, Gucci, or Armani boutiques, wealthy beauties parade like shopping zombies.

But another part of the city lives outside this opulence, obscene to the extreme. It suffers the consequences of residing in a small, densely populated space. It is precisely here where the middle class and the humblest layers of society live. They must settle for tiny apartments in filthy beehives of houses with more than 30 floors. 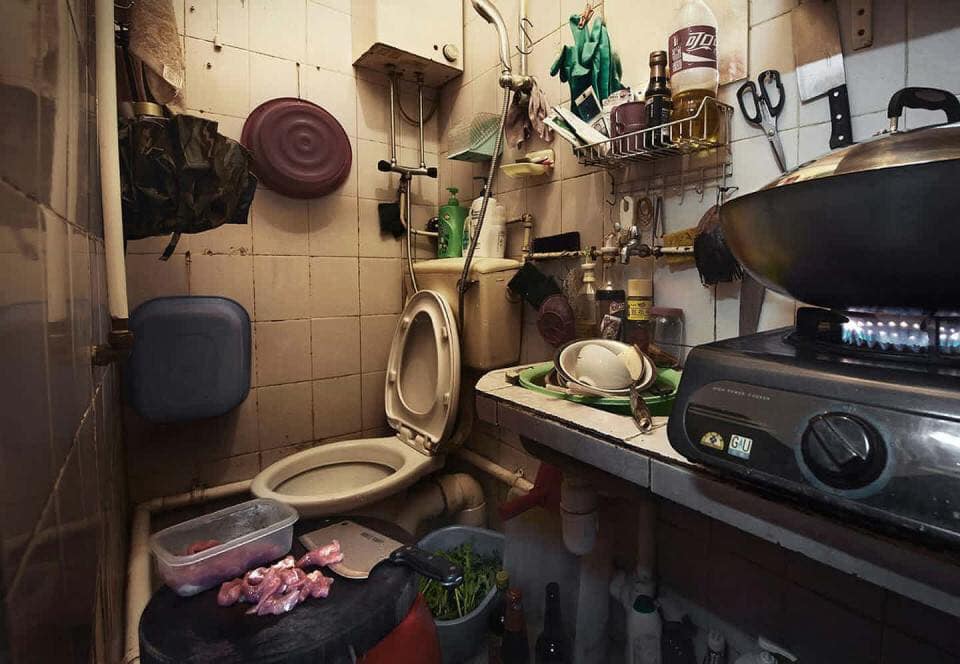 As the square meter in Hong Kong is one of the most expensive in the world, the lack of buildable land has hit 1,3 million people. According to the NGO SOCO (Society for Community Organization), these people live under the threshold of poverty in this paradise for the rich.

In search of maximum profit when it comes to taking advantage of the tiny space available, apartment owners have been dividing their rooms for decades to accommodate the vast number of tenants. These are the so-called "split houses," where large families live, sleep and eat crowded into small rooms. 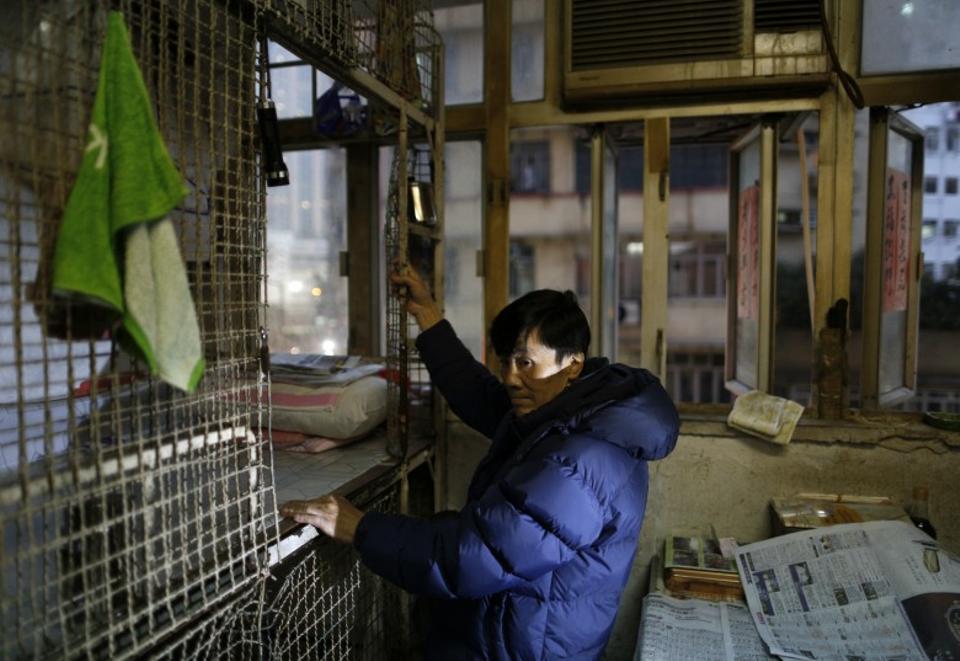 There is the case of Kong Sin-Kan, a 63-year-old man who calls home a cubicle of rusty iron stacked with 14 other cages in a room of just 20 square meters. The room only has a shared restroom with a leaky sink and a hole in the floor as drainage.

Without a mattress or sheets, Kong uses a mat and some cardboard full of bugs to sleep in his bunk, whose door he closes with a flimsy padlock. He uses it so that no one steals the four plastic bags with clothes and the two cups and plates that he counts as his only belongings. 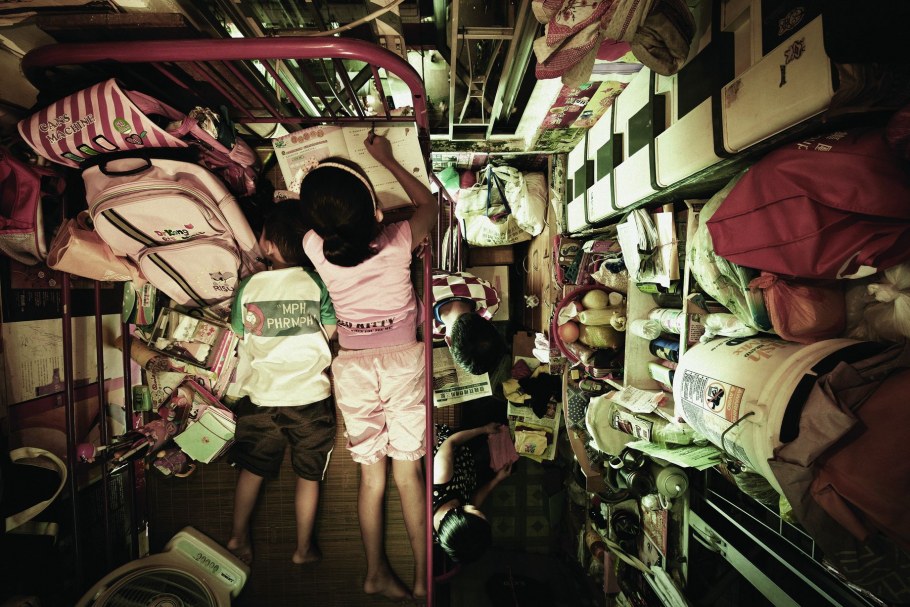 "It is unfair that there are so many rich people here, and the government does nothing to help us," complains the old man. He used to work as a street vendor and now receives the minimum pension offered by Social Security of 3,500 Hong Kong dollars (around $450).

Beside him, and under the thunderous noise of television hanging from the ceiling, his neighbors embarrassedly sink their heads into their bowls.

Hong Kong cage houses are inhabited mainly by the elderly, the chronically unemployed, the physically or mentally ill, alcoholics, recent immigrants from China, and members of broken families. They occupy the last place in the ranking of slums in Hong Kong, welcoming all kinds of residents with broken dreams. 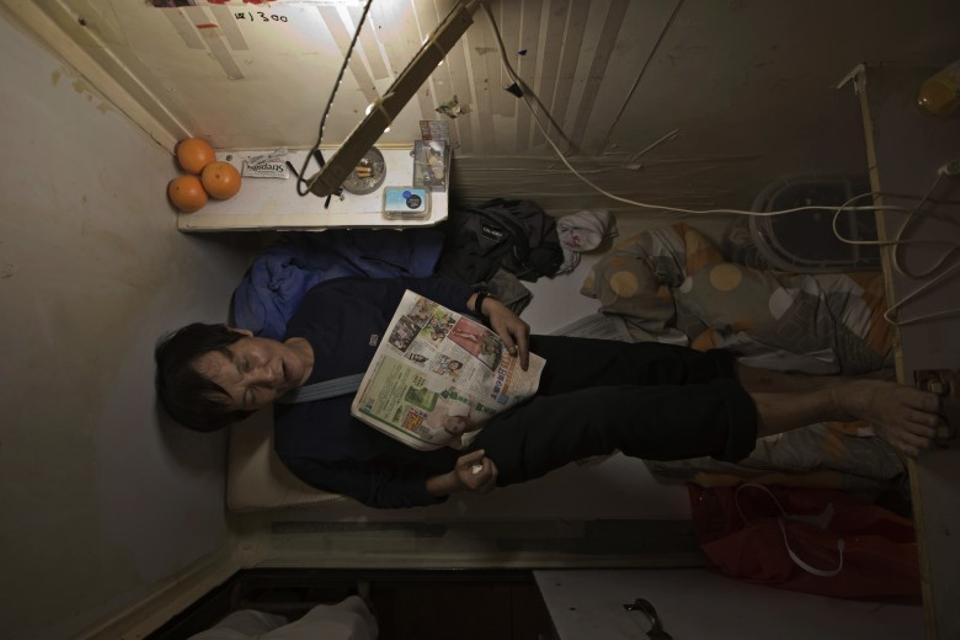 At 57 years old, Sin Wai-Ming stays in one of these buildings. The man shares a dark, smelly 30-square-meter flat with 28 other people plus three dirty toilets, only one of which has hot water. Bunk beds have replaced the cages without bars, but are just as small and smelly.

It is a sad end for a fighter who arrived in Hong Kong from China when he was only ten years old with his face cracked by life's blows. "My parents were starving. I made a living doing odd jobs and as a bricklayer until I found a good job in the shipyards that included food and accommodation in the workers' barracks," Sin Wai-Ming recalls.

In the 1990s, shipyards moved to China in search of cheaper labor, and his life took a 180-degree turn. "My wife and two children abandoned me because I had no money to take care of them, and I ended up on the street begging for money and rummaging through the garbage to eat." 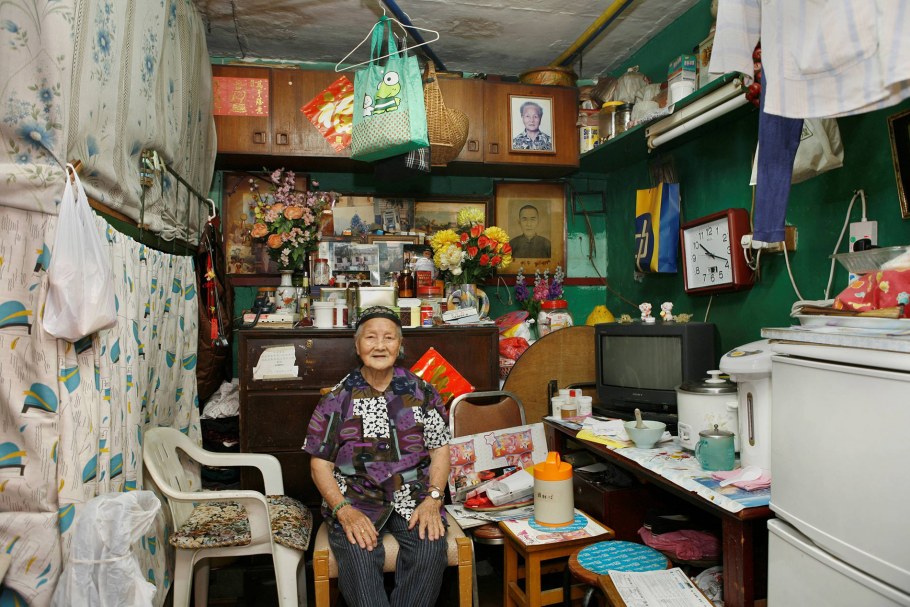 Sim now works from 7 pm to 7 am, cleaning an office building.

With his salary of 4,000 Hong Kong dollars ($510), he can pay the monthly rent of his cubicle. Yet he barely has money left to eat and buy the pills he needs for his heart. "I come back in the morning exhausted and have a bowl of noodles before I go to sleep. If I have money, I eat at noon. If not, I keep sleeping and wait for dinner before going to work."

Most Hong Kong cage house residents struggle to save money for their stay. These are their homes. The only places these people have to retreat to in the luxurious and opulent Hong Kong.