According to legal experts, Amber Heard could face a police probe for lying under oath. This comes after she admitted that she did not donate $3.5 million of her divorce settlement to charity despite telling the court she had done so.

Heard and Depp got a divorce in 2016, and at the time, she said she would split the $7 million divorce settlement from Depp between a children's hospital in Los Angeles and the ACLU (American Civil Liberties Union). 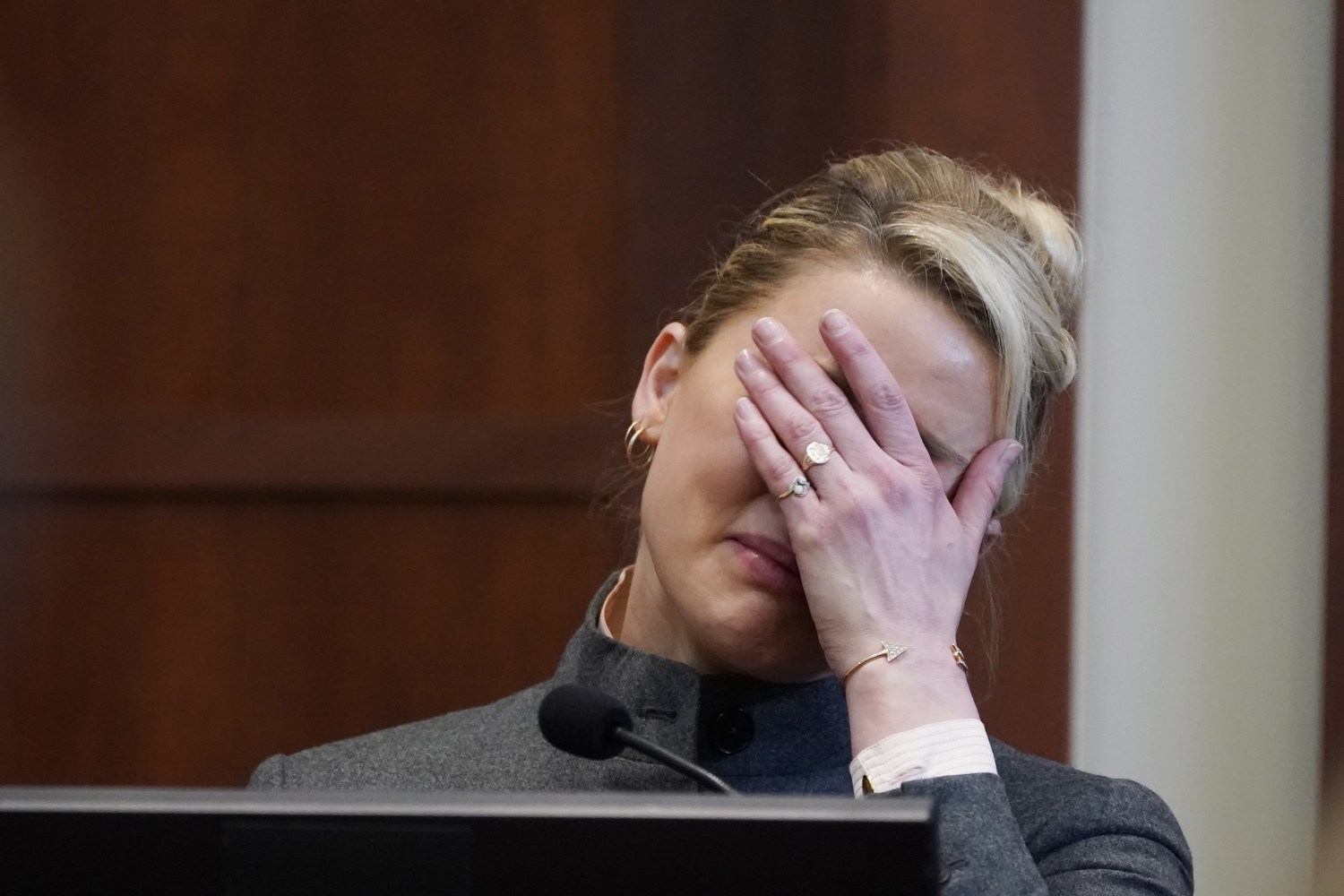 On Monday, during Depp's defamation case against her, she admitted that she had not made a full donation because her ex-husband Depp sued her for $50 million in March of 2019.

However, she had earlier claimed on several occasions that she had donated. On one of these occasions, she said so under oath during the UK High Court libel case.

Camile Vasquez, Depp's lawyer, argued that Heard had the money for several months before Depp filed charges against her, but she still hadn't made the promised donation.

Following the revelation, Heard is accused of misleading the public while talking about donations during her appearances on talk shows and under oath. 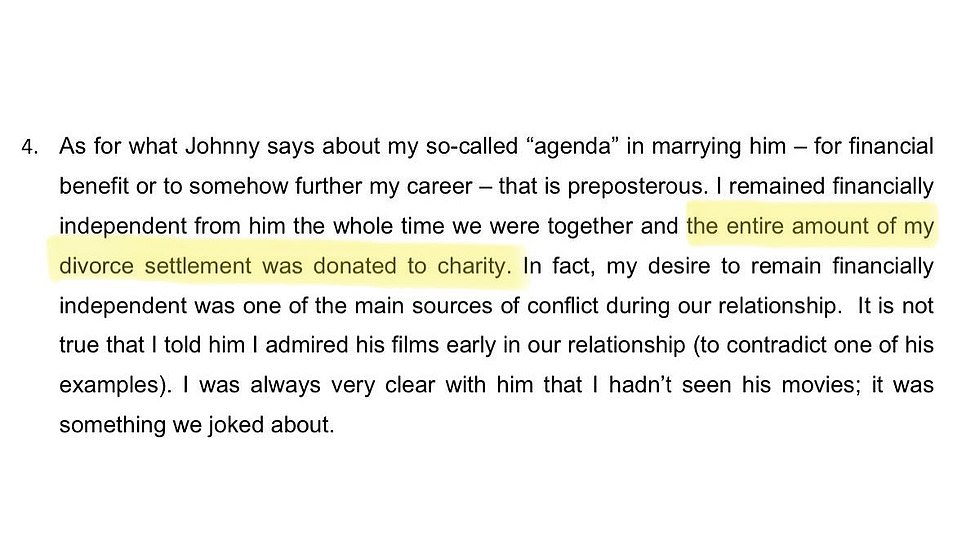 According to Sean Caulfield, a law partner at Hodge, Jones, and Allen, the police might be asked to investigate Heard as a way to prove that members of the public who lie to the court can face prosecution for perjury.

However, Caulfield also noted that it is not easy to prove perjury and said that it was not a main issue for the court unless Depp and his legal team were trying to prove that she was trying to keep the money.

Ideally, people should not perjure themselves. 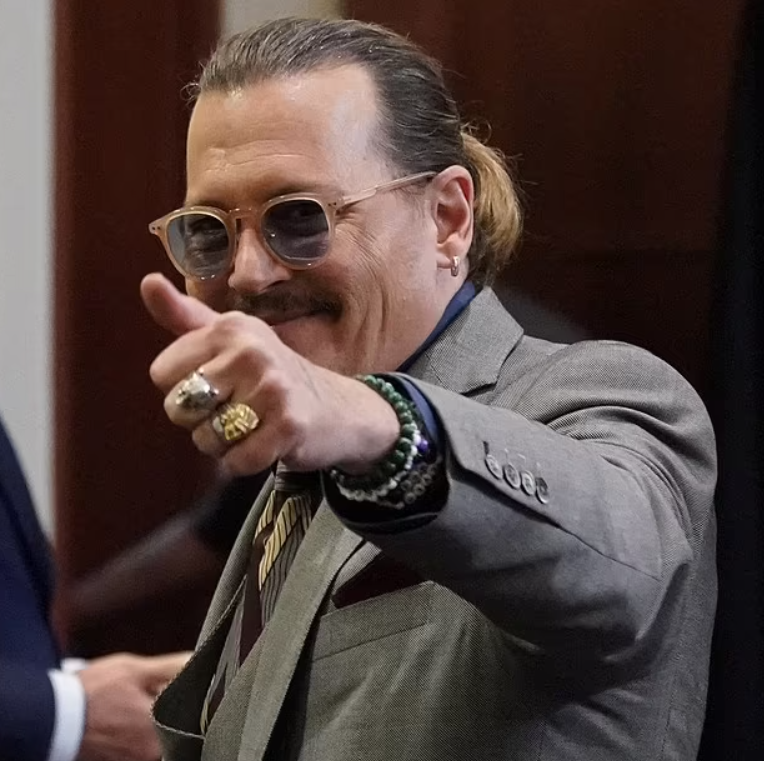 In Heard's case, she would have to be extradited, which is not likely since she is a US resident.

Mark Stephens, a legal expert, thinks that the police might decide to look into her claims in consideration of how her legal team is "severely outgunned" by the "smooth, swift operation" that is being operated by Depp's legal team.

Stephens also noted that it was "notoriously difficult" to prosecute a perjury case as you have to prove that someone lied on purpose as opposed to being confused about what they said.

Although the police could investigate the perjury claims, there is a possibility that they would not prosecute the case since the former couple is currently arguing about what happened during their marriage instead of how she spent the money. 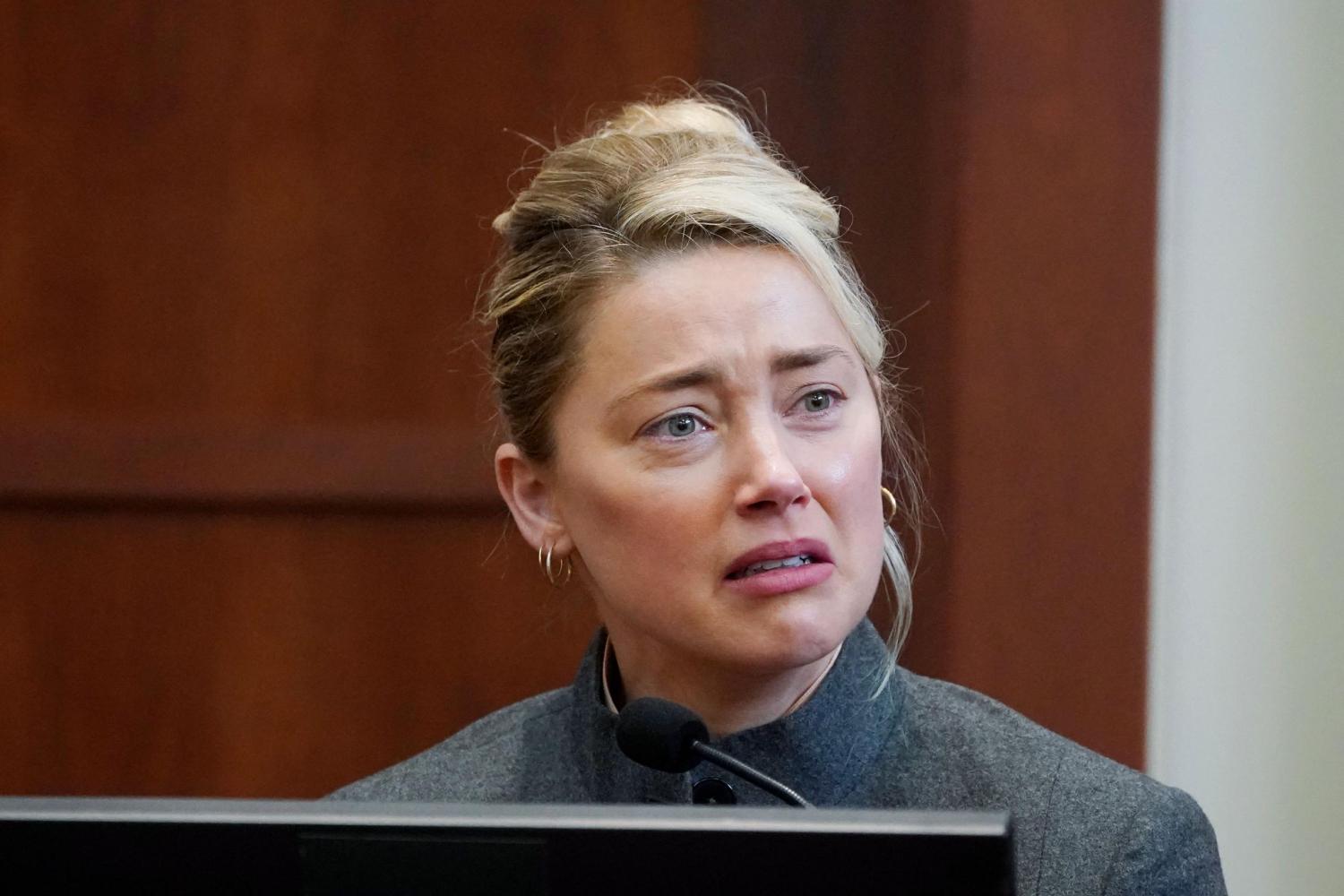 Stephens noted that misleading the court is a big deal, and this is something Depp and his team pointed out about Heard while in the UK. Stephens noted that there is still no proof that she knew she was lying as she could have been told that the donations had already been made.

For celebrities, access to bank accounts might be managed so they can believe that the donation was made when it wasn't.

While commenting on the case, Stephens noted that neither would come out of the case "well." He went on to say that Depp's legal team was of a "different class" because they knew the evidence was there and were not getting names wrong, while Heard's lawyers were "being outgunned."

In 2018, Heard was on the Dutch talk show RTL Late Night where she said that "$7 million in total was donated." She claimed that the money had been split between the ACLU and the Children's Hospital of Los Angeles. "I wanted nothing," she claimed.

ACLU Chief Operating Officer, Terence Dougherty, testified in the case, saying that only $1.3 million had been donated by Heard herself or on her behalf.

Out of the $1.3 million donated in Heard's name, she contributed $350,000 directly in December 2018 and never made additional donations. Furthermore, $100,000 was donated by Depp, while an additional $350,000 originated from an investment company, Fidelity.

After Depp and his legal team accused Heard of only donating "a fraction" of the huge amount of money she promised to give to charity, the details came to light. To Depp and his team, this was a "calculated and manipulative lie" intended to make her look good during their case in the UK last year. 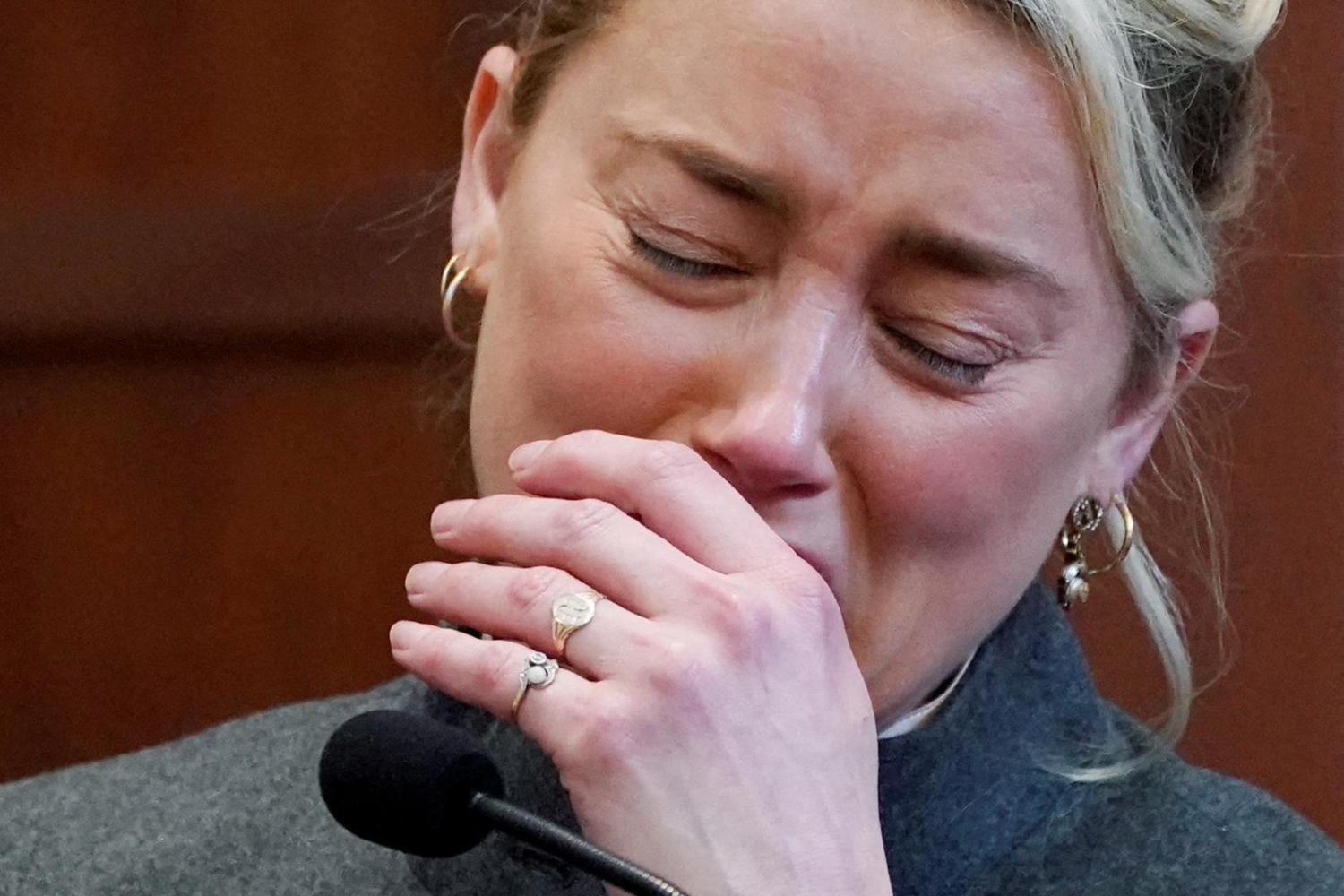 The actress has said that she intends to honor the pledges and "would love for him [Depp] to stop suing me so I can."

Although it's unlikely that Heard will have to answer to perjury allegations, according to experts, people have paid a steep price for lying in court in the past. According to Steven Heffer, famous people, including notable politicians, have spent time in prison for perjury. The crime is very serious under English law.

The sentence carries a maximum sentence of 7 years. Lying is believed to pervert the course of justice.

When Depp's lawyer told Heard that she had not made the donation as promised to keep as much of it as possible, she denied the allegation.

Heard's lawyer Elaine Bredehoft had asked her why she accepted a $7 million settlement from Depp during court proceedings on Monday.

She alleged that she did not need the money and was told that if she did not agree to a number, the divorce could not be settled: "I took far less than what they were offering and what I was entitled to."

She also said that she used the money to make donations because she was "never interested in Johnny's money."

Heard went on to claim that all she wanted was for Johnny to leave her alone so that she could have her safety and her future, which she felt he had compromised. 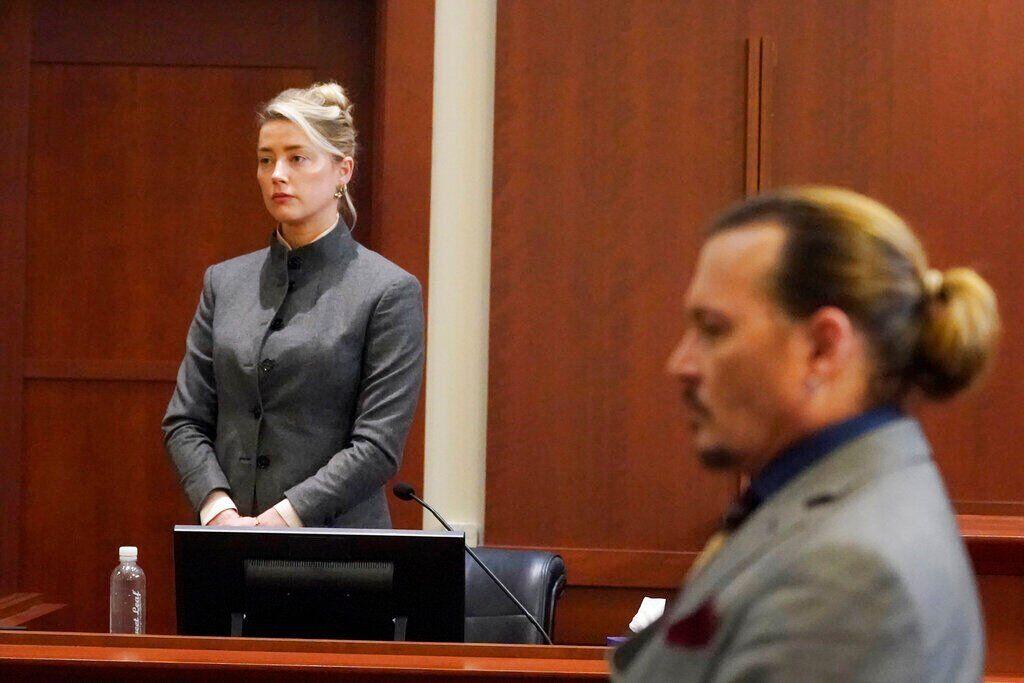 At the moment, Heard is undergoing a police probe for perjury in a case backed by the FBI. She is being accused of lying to Australian officials after smuggling her dogs into the country in 2015.

She avoided charges after making a public apology and saying that lack of sleep was the reason she had entered the country without the documents required for Pistol and Boo, her Yorkshire Terriers.

In October, Australian authorities said they were revisiting the smuggling case due to fresh details that had come to light when she was in court with Johnny Depp in the UK.