A player has been slapped with a ridiculous 8,000-year ban over the design featured on his car. The Forza Horizon 5 player had his car feature Kim Jong-Un's photo beside a KFC logo as a replacement for Colonel Sanders.

The car also had a Send Nukes hashtag and a New Balance logo redesigned as Nuke Balance.

The popular game is available on Xbox One, Xbox Series XIS, and PC. The ban has since gone viral. 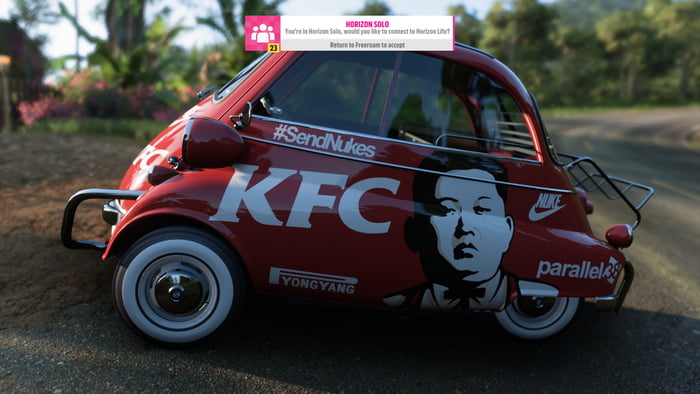 Information about the ban was shared on AllThingsRacing, a Forza subreddit.

However, after news of the extraordinary ban, Playground Games, the game developer, came forward to deny any involvement. The gaming outfit claimed that it had nothing to do with the ban as they had no mandate to enforce the game.

The outrageous ban was given by Turn 10 Studios' Enforcement Team. Turn ten is behind the Forza Motorsport series. 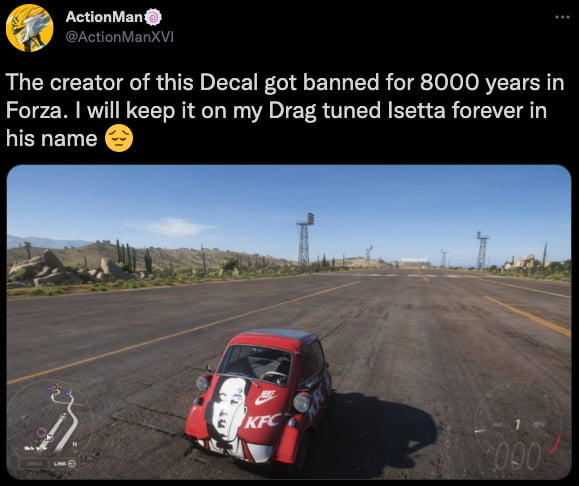 At the moment, Forza Horizon 5 is among the most popular games in the world, and it has many rave reviews from players.

According to news spreading around on the web, the banned player apparently has a habit of doing these kinds of things. However, a close friend swore that this was the first time he had taken such a decision.

A friend made the livery of the user, and this was the first time they had tried something of the sort.

It is unclear what part of the livery's design made Turn 10 Studios so angry. Without a doubt, the presence of the North Korean dictator did not help the player's situation.

There is also a possibility that the message about nukes might have appeared to encourage violence. In other words, there were plenty of possible reasons the player ended up with a ban, although the length of the ban was quite an overkill.

However, given the seriousness of the ban, players will now have to be more careful when creating liveries they can use during the game. From the look of things, political messages might get a very harsh reaction.

Before the ban, the player did not get any warning. It is not clear if the player will appeal the decision.