Police dashcam footage captures a Texas mom tackling a man in the middle of her street after she found him peeping into her 15-year-old daughter's bedroom window.

Phyllis Pena told cops that she had just returned home from the store around 7 am when she spotted a man in her yard.

The man, identified as Zane Hawkins, 19, was allegedly looking into her daughter's bedroom window.

Pena's daughter was not in her room at the time. But Hawkins fled the scene as soon as he saw the mom.

And Pena immediately called cops on him when she saw him leaving.

Police found the man nearby, but he tried to escape. That's when Pena moved in to tackle him like a pro.

"I figured at least I could do, if I got him down, tripped him up, whatever, then they'd have a chance to get caught up."

"First instinct was to just make sure he didn't go any further."

In dashcam footage, Pena is seen preparing to grab the man as he tries to escape past her.

The man, however, was in for a rude awakening when the mom tackled him to the ground.

Her daughter then rushed to help hold the suspect to the ground until police caught up.

The mom didn't think twice about putting herself in danger. After all, the man could have had a weapon or anything.

Nevertheless, the mom knew she had to do something to protect her daughter despite never having done anything like that before.

"I jumped in front of him and just tackled him. It just came naturally, which was really weird."

"You just want your kids to feel safe. In a situation like that, your kids don't feel safe."

"My kids are my life, and just making sure I protect them."

"It's not very often that we have somebody that actually steps in, puts themselves in harm's way to assist in apprehending somebody." 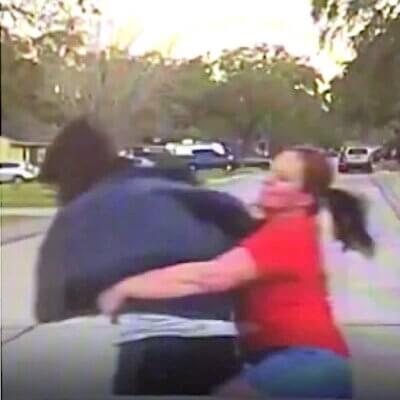 The mom also shared the clip from the incident on her Facebook page.

"The video everyone has been waiting for. My next step is to try out for the NFL."

According to the mom, her kids knew of the suspect but didn't know him personally.

The man is now in custody, facing multiple charges, including suspicion of possessing a controlled substance, evading arrest, and resisting arrest.