Between 1967 and 1971, Frito Bandito was the animated mascot representing Frito Corn Chips for the Frito-Lay Corporation. The cartoon character was created by Tex Avery, the artist behind Bugs Bunny, Daffy Duck, and Speedy Gonzales.

For about four years, the Frito Bandito character was one of the most racist mascots on television. The character was voiced by Mel Blanc, who also voiced Bugs Bunny.

Frito Bandito was introduced as a replacement for Frito Kid, a kid cowboy who lassoed people to have Frito chips with their lunch. The company thought a Mexican mascot would make their product appear more authentic.

Unfortunately, the company missed the mark by promoting many damaging Mexican stereotypes by using the mascot.

Frito Bandito represents many Mexican stereotypes. Frito is fat, has a thin handlebar mustache, a sombrero with a bullet hole in it, and six-shooter pistols on his hips.

The mascot also has a thick accent and speaks broken English.

At one point, Frito Bandito sings about his intention to take the viewer's corn chips. He seems to make a harmless offer of being the viewer's friend once he is offered Fritos Corn Chips, until cautions that failure to do so might get you on his bad side:

"Give me Fritos Corn Chips and I'll be your friend. The Frito Bandito you must not offend!"

After taking a bag of Fritos, the mascot suspiciously hides it under his hat.

There was also a colored T.V. ad of Frito Bandito where he entices someone with silver and gold as payment for a bag of Fritos before he twirls his pistols and threatens them.

Once again, he was depicted as an outlaw who would use threats to get his hands on what did not belong to him. 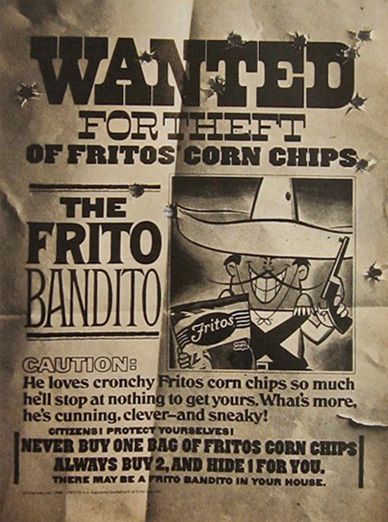 What made the racist imagery in the Frito Bandito character even worse were, without a doubt, the print ads that followed. The mascot was advertised using a bullet-ridden "Wanted" poster and a mug shot.

In the print ad, readers were told to be cautious and keep themselves safe because Frito Bandito had a terrible habit of stealing Frito corn chips.

The poster said he was wanted for the theft of corn chips and that he would "stop at nothing to get yours." The Mexican mascot was also described as sneaky and cunning.

Frito was also described as having a love for "cronchy [sic] Fritos corn chips." The word crunchy was purposely misspelled to depict his Spanish accent.

When the Frito Bandito ad was made, racial stereotypes were tolerated, and they were promoted through children's cartoons.

Characters like Bandito were considered relatable in the late 60s and early 70s. Racism was pretty common at the time and also highly tolerated.

Therefore, the company did not get the sort of backlash we would expect them to get if they tried to make such an ad today.

If anything, they managed to sell a lot of corn chips, thanks to the Mexican bandit. He even said that the Fritos Bureau of Investigation was after him for his crimes in a different commercial.

Opposition Against The Frito Bandito Ad

In 1971, Frito Bandito finally retired, thanks to pressure from Mexican-American advocacy groups that saw the ad for the racist disaster it was.

The National Mexican American Anti-Defamation Committee (NMAADC) and the Involvement of Mexican-Americans in Gainful Endeavors (IMAGE) demanded that the ad be banned. They claimed that it had a "racist message" that depicted Mexicans as "sneaky thieves."

Additionally, a Newsweek article said that Frito-Lay had been quite touchy about its "chubby Mexican thief." The company was criticized for picking on people subjected to racism based on the stereotypes they were promoting.

Still, Frito-Lay did not get rid of the ad immediately. They tried to resist the criticism against it, saying that Mexican-Americans in Texas and California liked Frito Bandito. They tried to tone down the racism by getting rid of Frito's gold tooth and the guns, which seemed distasteful after the assassination of Senator Robert F. Kennedy.

A lawsuit also claimed that the Frito Bandito character defamed U.S. citizens with a Mexican heritage. The suit demanded $100 in damages for all people with a Spanish-speaking ancestry, which came to about $610 million in total.

Frito-Lay finally agreed to replace Frito Bandito with another mascot, W.C. Fritos, a month after the lawsuit was reported in The New York Times. For the company to hang on to the ad despite all the resistance must have helped sell a lot of corn chips.

Otherwise, it was considered quite ironic that the company behind the ad had, in all likelihood, "stolen" a Mexican corn chips recipe and then turned around and used an ad that portrayed Mexicans as thieves to make it appealing to average Americans.

In that case, then Frito Bandito had every reason to want some justice, even if that meant stealing people's corn chips.

Racist Ads Exist To This Day 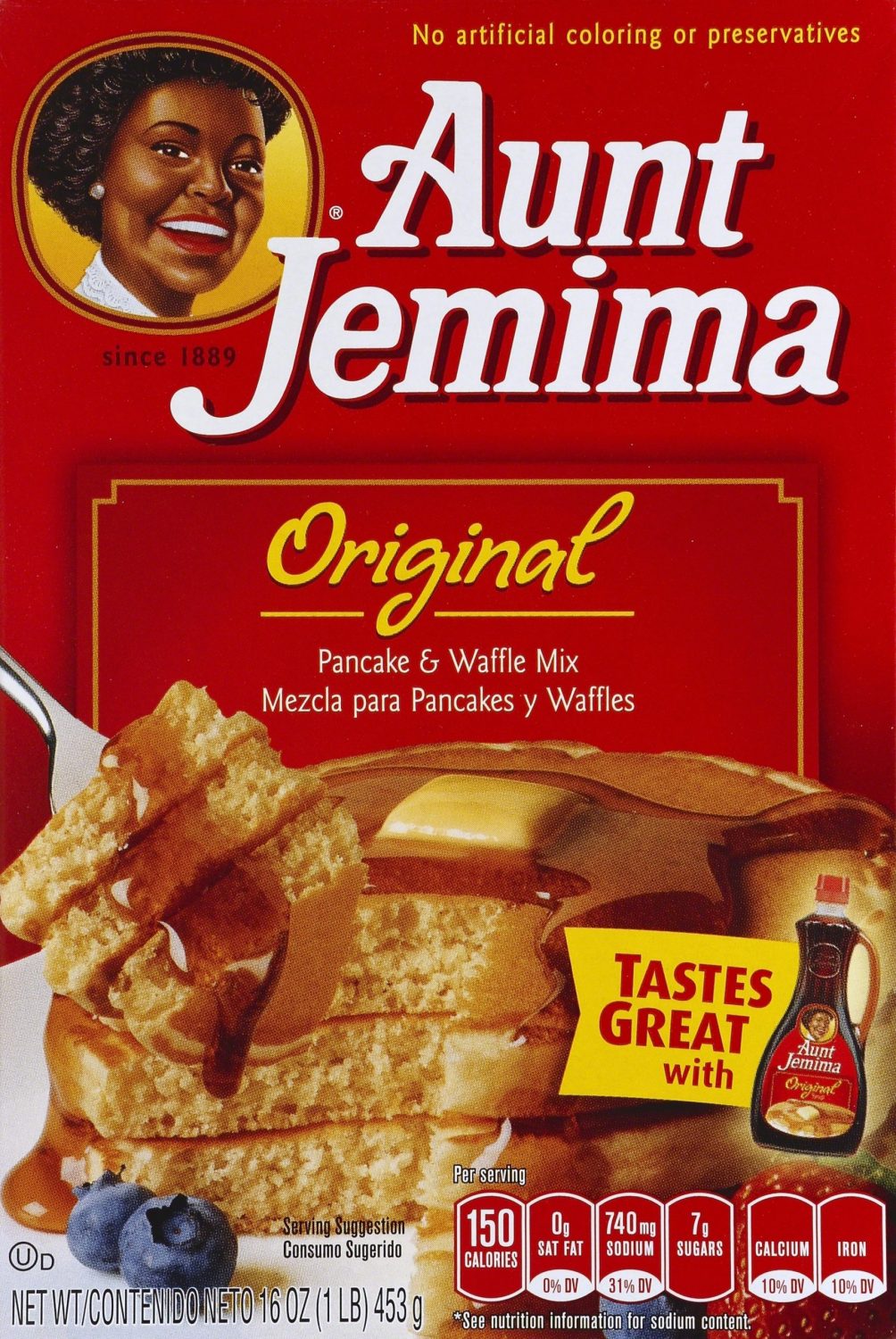 It would be unthinkable for companies to use a racist mascot like Bandito today, but it does not mean racist mascots no longer exist. This is even though many controversial product mascots have been retired after protests from advocacy groups.

For instance, Aunt Jemima had been around since 1889 before the ad was retired after 131 years in 2020. She was a Black woman portrayed as a servant.

Even more horrifying is the fact that the initial drawings of Aunt Jemima were made with poses from a formerly enslaved person.

The same can be said of Uncle Ben in his depiction in Uncle Ben's Rice. The mascot was an old Black man wearing what seemed like a butler's outfit.

Once again, the Black character is depicted as a servant. The usage of the word "Uncle" is linked to slavery when it was used in a derogatory manner.

Still, the negative racist stereotypes in these ads are not as blatant as what we saw with the Frito Bandito ad, which is probably why these companies got away with their subtle racist depictions for as long as they did.

Bandito crossed the line because the mascot combined far too many stereotypes not to be called out for it. By many societal standards, Frito Bandito was just appalling. 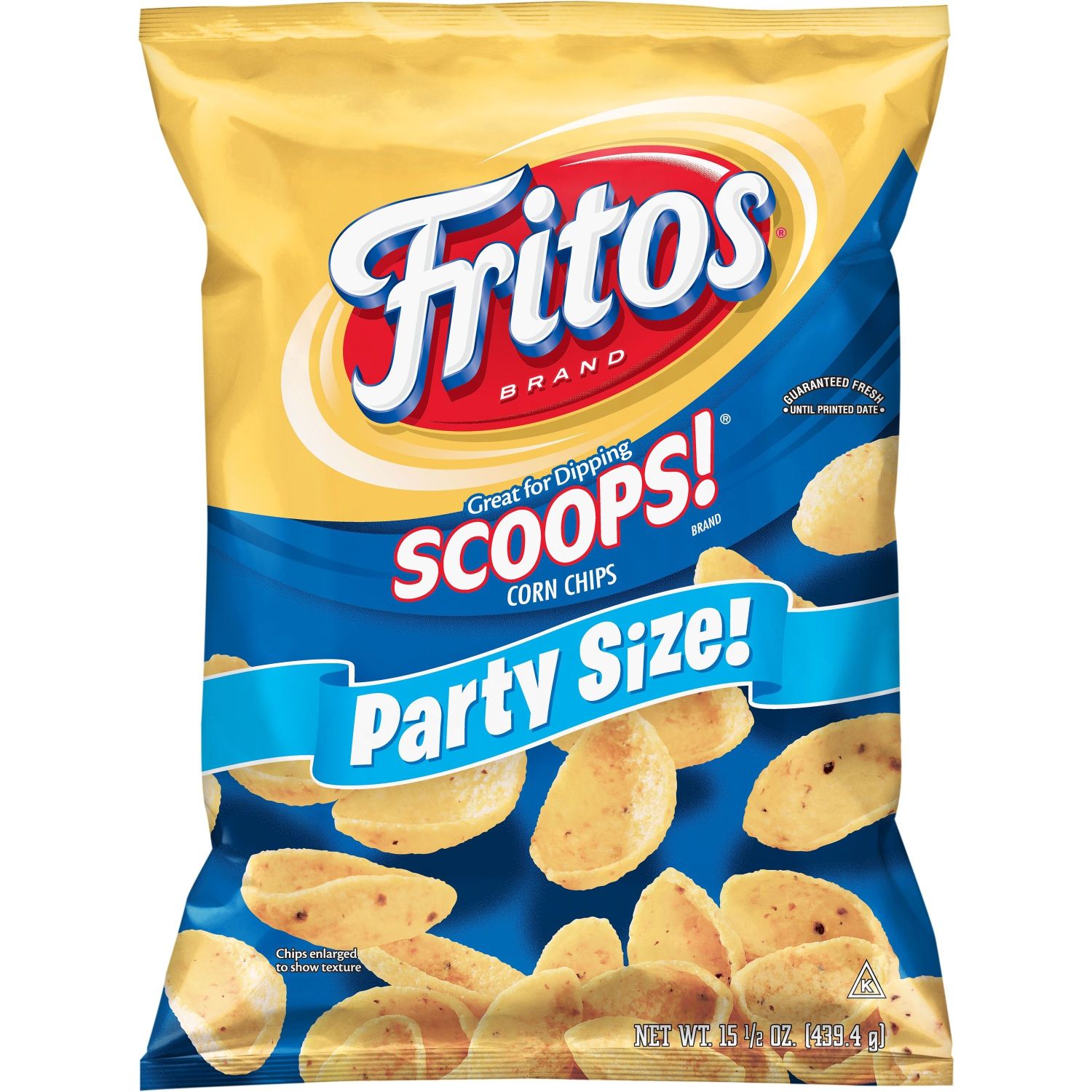 Even today, Hispanic stereotypes are rather common. Nevertheless, their use usually depends on what language the ads use and whether or not Spanish talent is involved in their creation.

Today, the most persistent yet subtle stereotype is that all Hispanics are immigrants. For instance, in 1994, there was a Cinco de Mayo "contest" in which listeners would get their "own personal Mexican."

Listeners were warned that they had the responsibility of "bathing and delousing" the Mexicans they won and also bore "responsibility for infectious diseases carried by Mexicans."

Nowadays, there is a trend where Hispanics are portrayed in a positive light in ads that appear in Latino media. Sadly, they often never get a positive depiction in general-interest media.

In mainstream American media, Latinos often take on the roles of hired servants, disadvantaged children, or get token roles as members of groups in the corporate messages.

Minorities are either ignored by advertisers or get depicted as society likes to think of them rather than showing them for who they are. Advertisers are generally more interested in appeasing Anglo consumers using stereotypes that get their attention or play on their racial prejudices.

The problem with racial stereotypes, such as Frito Bandito, is that society eventually takes these broad misconceptions as the truth. Ultimately, this negatively affects people from these groups in their daily lives.

Even today, racist ads are being taken off the air. For instance, Quaker Oats announced plans to retire Aunt Jemima in a redesign while also admitting the character was based on "a racial stereotype." Similarly, Land O'Lakes got rid of Mia, an indigenous woman, in their cheese and butter packaging.

Uncle Ben's also announced it would be changing its mascot for the same reasons in 2020.