A Missouri man had no option but to admit he was guilty of assault after being caught on camera viciously attacking a child. The film shows the man sucker-punching the 12-year-old boy with no provocation whatsoever.

For his violent outburst, he will be spending 7 years behind bars.

The man weighs 205 pounds, and he was a convicted felon. He punched the boy on Cape Girardeau, Mo. The crime was committed at the street corner. 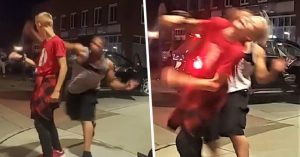 The uncomfortable footage was recorded in July 2020, and it caused quite an outrage.

Based on the video, the boy and two of his friends were listening to some music when a car pulled up close to them.

The man, 28-year-old Cedric Moore, exited the vehicle then snuck behind the boy. The child was making some dance moves at the time.

Before the boy could figure out what was about to happen, he was hit with a devastating right hook.

After the vicious assault, the man ran back to the SUV and got away. He was a passenger in the vehicle.

Following the attack, the boy was bloodied, and he had to receive treatment at the hospital for his injury. He has since been identified as Ethan Hagler.

Earlier this year, he pleaded guilty to the charges leveled against him over the assault.

The 205-pound convicted felon who sucker-punched a 12-year-old boy on a Cape Girardeau, Mo., streetcorner has been reportedly sentenced to seven years in prison.https://t.co/vHXJgIYSkw

At the time he slugged Hagler, he was on probation. He had been found guilty of a felony domestic assault back in 2019.

In addition to the seven years he will spend in jail for this assault, he will also serve four years for violating the terms of his probation.

However, the two sentences will run concurrently, which means he will spend seven years behind bars.