Next to the remains was a backpack and a diary, which were confirmed to belong to now-deceased Brian Laundrie. 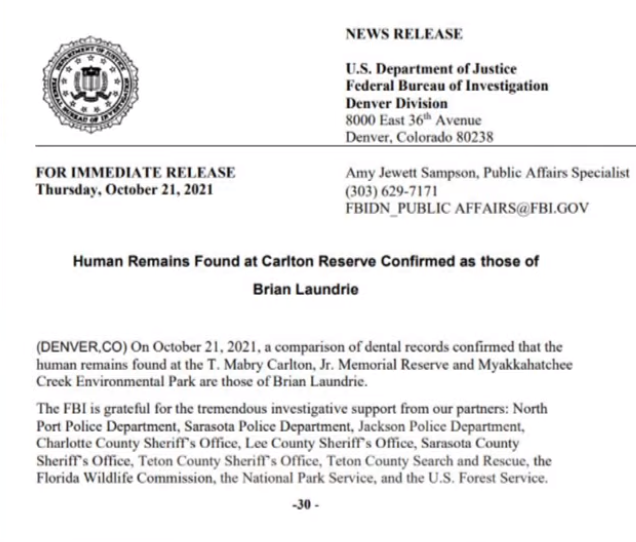 Brian disappeared a few days after his fiance was reported missing on September 11. A week later, a body was found in Wyoming, and it was confirmed that it was Gabby Petito's.

Gabby Petito was a victim of strangulation.

Brian Launrdie was the only person of interest in the death of his fiance, who was 22.

The couple's volatile relationship was revealed to the general public after the Moab police stopped them.

It is unclear how Brian Launrdie died, and what is even more concerning is that we might never know the cause of death.

"Chris and Roberta Laundrie have been informed that the remains found yesterday in the reserve are indeed Brian's."

"We have no further comment at this time and we ask that you respect the Laundrie's privacy at this time."

In the FBI's statement, it says:

"On October 21, 2021, a comparison of dental records confirmed that the human remains found at the T. Mabry Carlton, Jr. Memorial Reserve and Myakkahatchee Creek Environmental Park are those of Brian Laundrie."

"The FBI is grateful for the tremendous investigative support from our partners."

Autopsy and DNA samples might give more insight into what happened between Gabby and Brian. The story is far from over, but the search, which lasted for over a month, ended most horrifically.