Fashion designer Vivienne Westwood, known for her iconic style, has passed away at the age of 81.

The Westwood label confirmed on December 29th that Vivienne Westwood had passed away at the age of 81. The statement, which was shared on Twitter, reads: "Vivienne Westwood died today, peacefully and surrounded by her family, in Clapham, South London."

"The world needs people like Vivienne to make a change for the better." The statement from the Westwood label included a quote from the late designer, whose full name is Dame Vivienne Isabel Westwood DBE RDI, referencing the Tao spiritual system.
Advertisement

"There was never more need for the Tao today. Tao gives you a feeling that you belong to the cosmos and gives purpose to your life," it states.

"It gives you such a sense of identity and strength to know you're living the life you can live and therefore ought to be living."

The brand added: "Vivienne, we love you."

Tributes have been pouring in for Vivienne Westwood, who played a significant role in the punk movement in the UK in the late 1970s.

Westwood was instrumental in shaping punk fashion, having opened SEX, a boutique on King's Road, in collaboration with Malcolm McLaren, the former manager of the New York Dolls and the Sex Pistols. After establishing SEX, Westwood created a number of independent collections and expanded into new areas, eventually establishing her own self-named brand.

Westwood is well-known for her association with punk, as well as her daring and imaginative designs. She has also used her influence to raise awareness about environmental and human rights issues.

Comments continue to pour in for the icon, with one writing on Twitter: "Another legend gone far too soon.

"Rest in peace Vivienne Westwood, you have inspired many and will continue to inspire future generations."

Another said: "I'm at a lost of words with the news of the passing of Vivienne Westwood, may she rest in peace, her legacy will live on forever."

"Wishing all the love and strength to the family in this time of grieving, truly the loss of a legend."

A third person added: "She was a fashion genius that created the punk identity through her fashion and aesthetic." 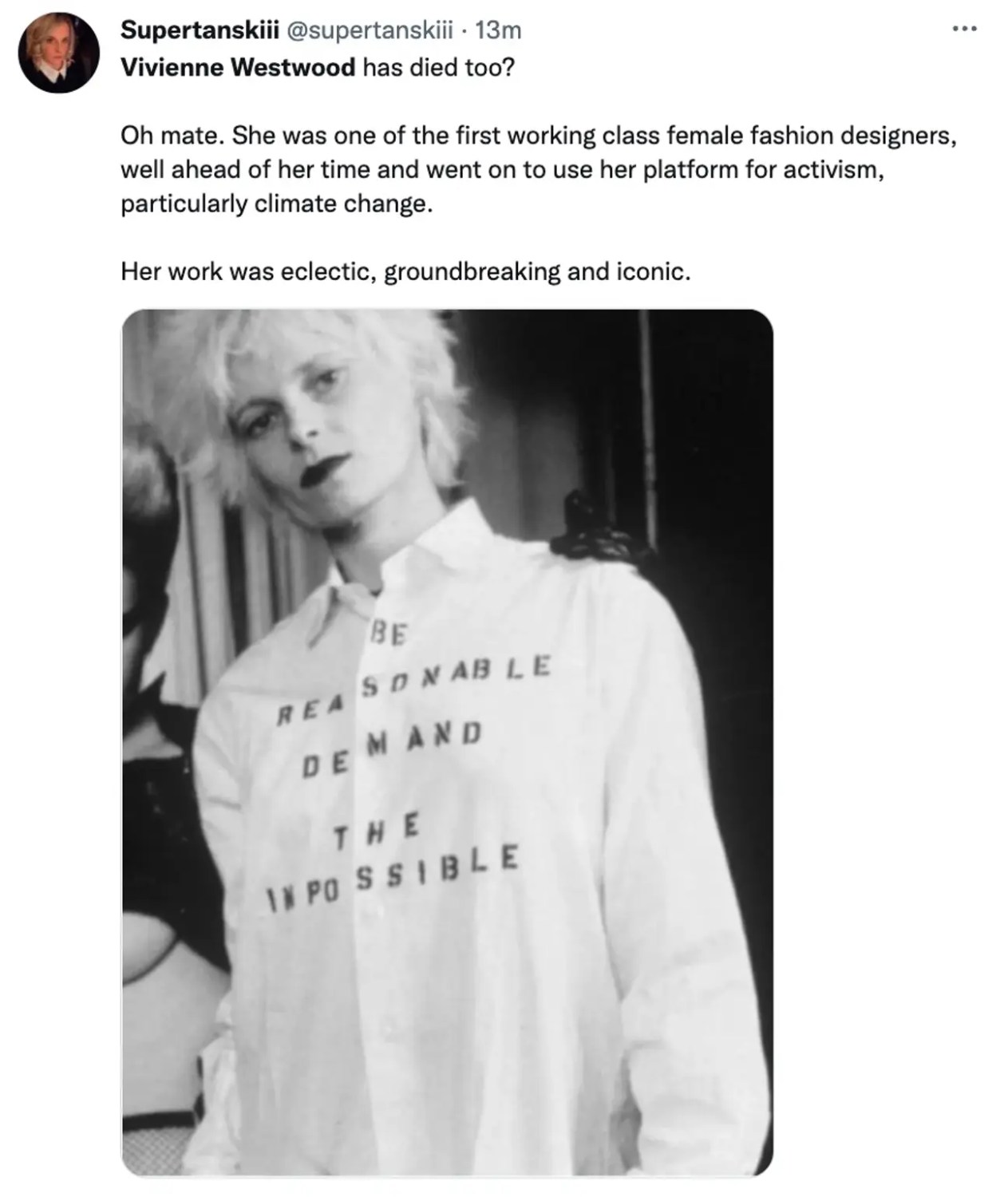 While a fourth said: "Nooo Vivienne Westwood was so damn cool. She was a working class fashion designer, which is extremely rare, and her designs were punk and goth and god, just endlessly covetable.

"RIP to one of the raddest people to ever do it."