Bill Gates is no longer the world's second richest man. Billionaire entrepreneur Elon Musk, whose incredible wealth is now only second to Jeff Bezos', has overtaken the famous Microsoft founder.

Just a few weeks earlier, Elon Musk relegated Mark Zuckerberg to the fourth position when he took the third place.

Musk has witnessed a more than $100 billion increase in wealth this year. This unprecedented growth in wealth came after his company, Tesla, was chosen to be among the S&P 500.

The world-famous index measures the financial performance of the 500 largest companies in the US stock exchange. 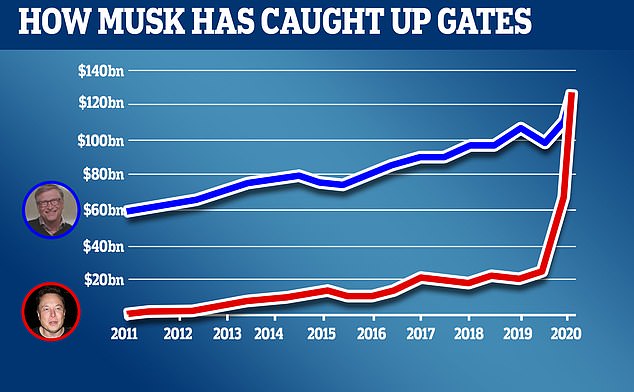 This is the first time Musk has overtaken Bill Gates, thanks to the billionaires great fortunes in 2020.

Musk owns 20 percent of Tesla, and the company's share price has increased by more than 5 times, growing his wealth considerably.

Generally speaking, this has been a really good year for the entrepreneur. His rocket company, SpaceX, also managed to send four astronauts into space.

In the process, the company managed to fulfill its first initial contract with NASA.

About 75 percent of the billionaire's wealth consists of Tesla shares.

Although Tesla only makes a fraction compared to the leading car-companies like Toyota and Ford, it is the most valuable carmaker in the world. In fact, the company is more valuable than Disney and Coca-Cola with a market cap of nearly $500 billion.

Being an S&P company means that you need to meet the feat. Eligibility criteria minimum cap of at least $8.2 billion with at least half of the shares available to the public.

Such companies should also have at least four consecutive quarters of profit and be based in the US.

Bill Gates Has Been Number 2 For Three Years

This is the third time Bill Gates has been number three in eight years. He lost his position as number one in 2017 after being overtaken by Jeff Bezos, the Amazon.com founder.

If Gates had not given so much of his wealth to charity, his wealth would be much greater than the current $127.7 billion.

Whatever the case, Elon Musk is now number 3, a position he has never held before, and it's all thanks to Tesla's good fortunes in 2020.