Ellen DeGeneres, just like Chrissy Teigen, should consider taking a long Twitter break. Her response to Simone Biles' withdrawal from the Tokyo Olympics got the TV host in hot waters. Again.

People were in shock upon hearing that Simone Biles, arguably the greatest gymnast ever and four-time Olympics gold medalist, quit the team on July 27.

After scoring her lowest ever, Simone decided to withdraw, citing mental health issues.

Though disappointed, people praised the young gymnast because she is first and foremost a person, then an athlete.

So, what did Ellen DeGeneres had to say about this?

Simone Biles Is A National Treasure

Simone, 24, is among the greatest and most beloved athletes in the world. Her life-changing break came to life in 2016, during the Olympics.

But, for Biles, that was nothing more than a confirmation that her hard work paid off. She started training when she was 6, and now Simone has 5 Olympic medals and was 14 times world champion.

Her difficult childhood, going from one foster home to another, only made her more powerful and more inspiring. Born in Columbus, Ohio, Simone and her siblings had to deal with parents who were struggling with addiction.

When Simone was 6, she and her sister Adria were adopted by their maternal grandparents.

At first, becoming a gymnast was a dream. But, with her coach Aimee Boorman, Simone became a national treasure in all her glory.

Standing 4 foot, 8 inches tall, Biles surprised the world with her charisma, energy, and the world fell in love with her during the Olympic Games in Brazil in 2016.

"I was so physically exhausted that I needed the break. Mentally and physically – I had earned it."

Simone also shared that she goes to therapy since gymnastics and that the whole environment became toxic:

"I go to therapy to help with that because there were times when I didn't want to set foot in a gym. But am I going to let that keep me from my passion and the goals that I still have? It's just another bump you have to get over."

She came back for the 2018 World Championship, and of course, did not disappoint.

A year later, she made history. At the 2019 U.S. Gymnastics Championship in Kansas City, Missouri, the 5-time Olympic medalist became the first-ever gymnast to land a double-twisting, double somersault dismount from the balance beam in a match.

The next day, Simone became the first woman to perfect the triple-twist, double-flip move in her first pass on the floor. 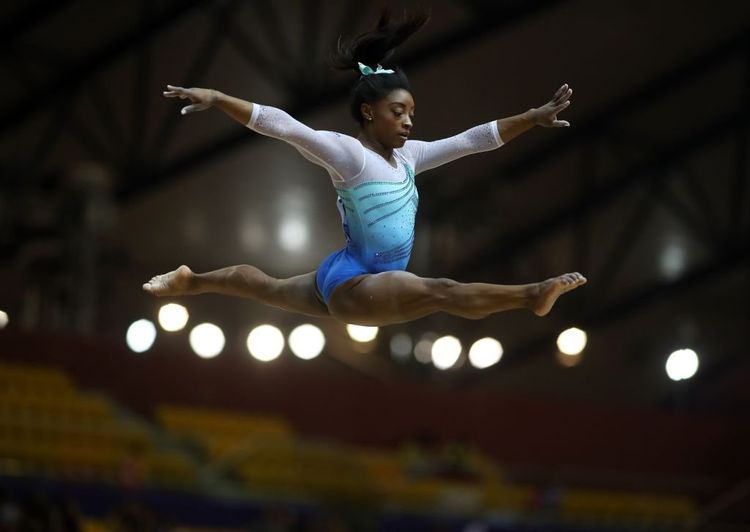 Speaking about her victory, Biles showed that she is humble and even a bit too tough on herself:

"It wasn't as good as in training. I'm just happy that I landed it because I feel like after night one, my confidence got shot down. So I was really worried about it going into today; that's all I could worry about. So I was really happy."

The GOAT then spoke about another burning topic - USA Gymnastics trainer Larry Nassar.

Three years ago, he was jailed for sexual assaults on numerous young athletes. 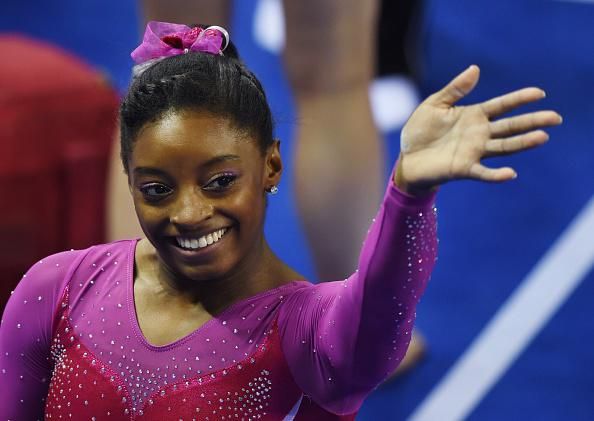 Simone stated that it was far from over:

"It's far from over. There's still a lot of questions that still need to be answered."

"Just who knew what, when? You guys have failed so many athletes — and most of us underage. You guys don't think that's a bigger problem?"

"We bring them medals. We do our part."

"You can't do your part in return? It's just, like, it's sickening."

She even declared that she would not allow her daughter to compete for the US team, and no one could blame her:

"Because I don't feel comfortable enough, because they haven't taken accountability for their actions and what they've done. And they haven't ensured us that it's never going to happen again." 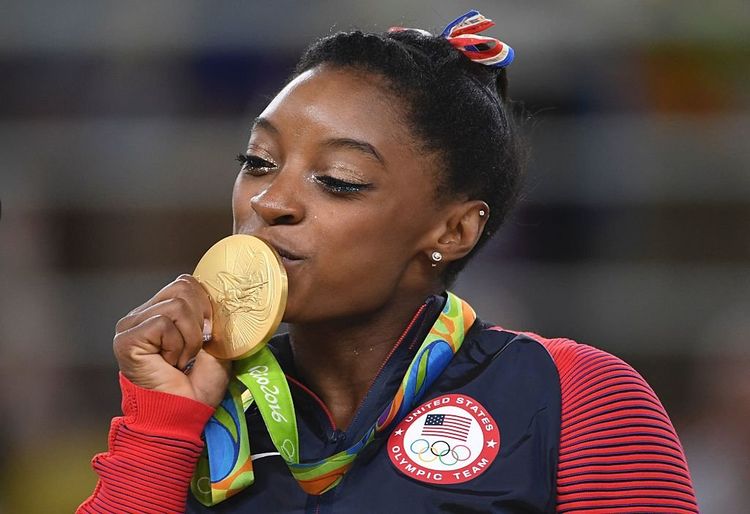 Her career seems to be strong, but Simone is even stronger. At the 2021 GK U.S. Classic, she tried and nailed what's called a Yurchenko double pike.

Humble as always, she said:

"To finally just put it out in a competition was quite nice; I know it's not the correct value that we want, but I can still do it, so why not show off my ability and athleticism."

The Statements That Shook The World

Despite her recent success, the Tokyo Olimpic Games started tough. And then, CBS Sport wrote that Biles withdrew from the lineup after making an error on her vault in the opening minutes of the competition.

Simone put up a statement:

"Simone Biles has withdrawn from the team final competition due to a medical issue. She will be assessed daily to determine medical clearance for future competitions." 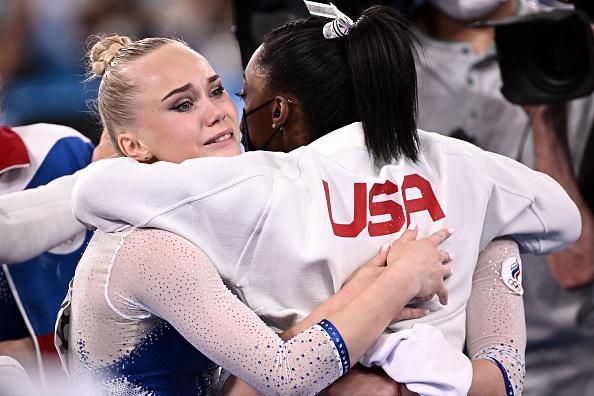 "Yes, I'm okay. Just dealing with things internally that will get fixed out within the next couple of days. But super proud of how they stepped up to the plate tonight and worked."

"After a further medical evaluation, Simone Biles was withdrawn from the final individual all-around competition at the Tokyo Olympic Games in order to focus on her mental health. Simone will continue to be evaluated daily to determine whether or not to participate in next week's individual event finals. Jade Carey, who had the ninth-highest score in qualifications, will participate in her place in the all-around."

Again, Simone had to speak up because her withdrawal caused quite the stir:

"Whenever you get in a high-stress situation, you kind of freak out. I have to focus on my mental health and not jeopardize my health and well-being."

People were sad, yet most understand that Simone deserves to take as many breaks as needed.

Online Community Offered Empathy For The Most Part

Here are some of the tweets that perfectly reflect how the majority feels:

For all the amazing competition moments Simone has given us to look up to, it’s really this moment that we should be showing our younger generation. She has looked out for and cheered on these younger athletes every step of the way. Class act.

And while the vaults and skills and medals are cool, I think the most valuable thing that @Simone_Biles has given us is the reminder that the well-being of the athlete comes first. Full stop.

It’s impossible to understand the pressure Simone Biles—the greatest gymnast in the history of the sport—and Naomi Osaka are feeling, but we’re lucky to live in a time where young Black trailblazers are publicly prioritizing their mental health above all else. That’s power.

Am I good enough? Yes, I am. The mantra I practice daily. @Simone_Biles, we are proud of you and we are rooting for you. Congratulations on the the silver medal, Team @USA! 🎊

And so did Uzo Adub:

Yes. This is what a champion looks like. So proud of #SimoneBiles and the entire gymnastics team. How lucky we are to have you all as our Team USA. https://t.co/4TrcUXuQpm

Hoda Kotb said it best: Simone already won. As for Ellen, she has a lot to learn, apparently.

Ellen, Among Other Celebrities, Shared Her Thoughts On Simone's Exit 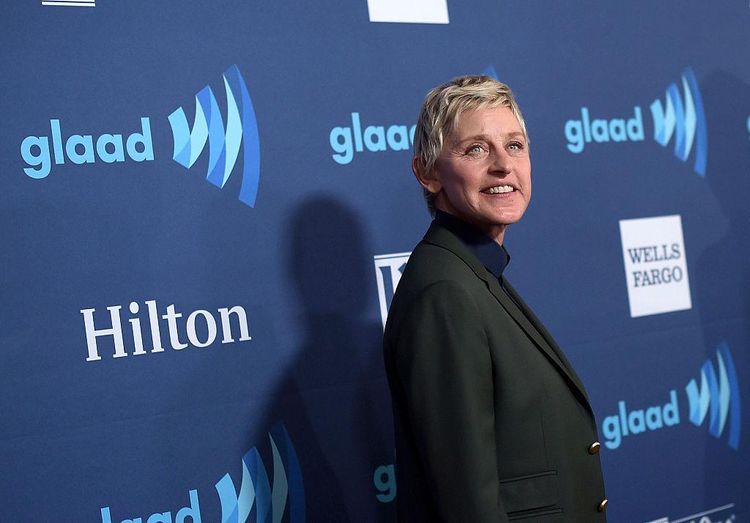 Not many wanted to deal with Ellen after Simone's shocking decision.

People were having none of it:

😂 what about the mental health of the Ellen Show employees? Did you care about that?

But if she was one of your employees you'd have thrown a solid gold book at her head.

Yeah I’m sure if she worked for you and tried to take a day off because she was stressed you’d have allowed it. I mean we all know how well you treat your employees.

After former employees shared their horror stories, most of us lost faith in Elle DeGeneres. Using Simone's situation to gain some positive fraction is a low move.

Not the time for puns. You still don’t get it.

I wonder how’s the mental health of the people working your show....

As solid as allowing a hostile work environment?

don’t you have staff to abuse

Typing to Simone, "you're solid gold in my book," would not be an issue. However, we all know what Ellen did, and now that the cat's out of the bag, we simply don't trust her.

What do you think about Ellen's tweet? Was she truly being supportive or attention-seeking?