Being stuck on a long flight in the same plane as a constantly screaming baby can easily be placed among the top nightmare scenarios.

One unfortunate passenger experienced hell as he found himself on a 29-hour-long flight to Berlin with an inconsolable infant.

He recorded a video during the journey that went viral on TikTok as people related to the man's agony.

The passenger is Henry Beasley from New Zealand. He posted the clip on his TikTok account Balu Brigada, the name of the band he has with his brother.

You might want to check the volume on your device before playing the video below. The infant's screams are gut-wrenching, and Henry's reaction is relatable.

Hey babe, how was your flight?

The groove-pop musician filmed his face at various times of the journey, and the baby a few rows behind him can constantly be heard screaming.

"Rate my 29-hour flight to Berlin. The kid's got some lungs. Great projection," Henry captioned the video on TikTok.

Although his eye was twitching at the horrible experience, he joked about the situation by rating the various screams in his video.

"Stellar performance, incredible stamina. 10/10," an exhausted Henry ended the video. By that time, his eyes could barely stay open. It must have been many agonizing hours.

The video viewers are, as expected, compassionate and horrified by the event.

"Honestly, there should be kid-free flights and kid flights," one commenter wrote. 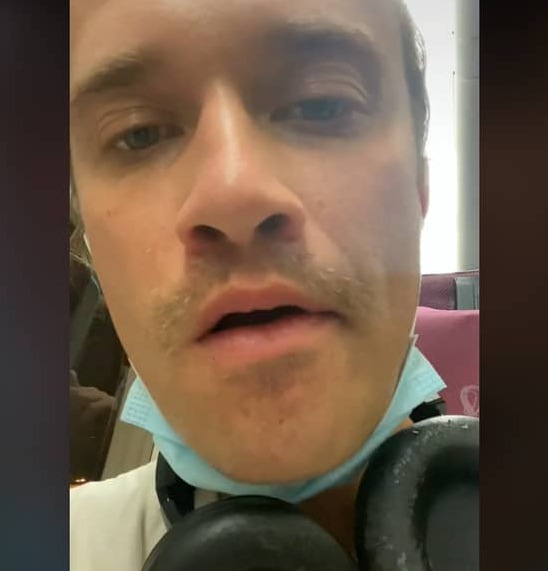 "The rage I get just by watching this," another said. "I've stopped counting the reasons why I don't want kids, but this one is definitely on the list."

"They shouldn't let kids on flights longer than 4 hours," a third pointed out.

Passengers have requested child-free flights for many years. Ryanair and WestJet have claimed to introduce them, however, it has turned out to be April Fools jokes.

TikTok has become a popular platform for showcasing and sharing nightmarish flight experiences, showing that the passengers on Henry's flight are far from the only victims.

Morgan Lee is another unfortunate passenger stuck on a plane with a screaming baby. The noise was so piercing that not even her noise-canceling headphones could block it.

"Why isn't there such a thing as adult-only flights? I would pay SO much money," she wrote in a video she shared on TikTok earlier this year.

"I have kids and think this should deff be a thing. Maybe a certain time of flight or whatever could be child-free," one social media user agreed.

"Works well for both people traveling with and without kids."

Some commenters, however, were of the opposite opinion.

"Call me controversial, but the idea of a child-free flight simply angers me," a TikTok user wrote.

"You shouldn't ask for any kind of person-free anything without it being amoral or offensive, yet it's perfectly fine, it seems, to do exactly that to children," another pointed out.

Well, there is a crucial distinction between grown people and infants. A grown-up, or an older child, is aware of the surroundings and usually does not spend a 29-hour flight screaming at the top of their lungs.