The Aztec Empire collapsed in the 1500s. Yet, to this day, it continues to be a source of intrigue to many due to its unique culture. For over a century, people have claimed that the Aztecs were responsible for creating mysterious crystal skulls with mystic powers.

Anna, the adopted daughter of British adventurer Frederick Mitchell-Hedges, discovered a crystal made of a single piece of clear quartz in modern-day Belize in 1924. Mitchell-Hedges was leading an expedition to an ancient Mayan city, Lubaantun.

The groundbreaking discovery, named the Mitchell-Hedges skull, led to theories about supernatural powers and legendary civilizations. Today, there's evidence that these claims cannot be trusted.

In total, 13 crystal skulls were discovered. They are spread out among private and public collections. The skulls are not all of the same sizes, and some of them are clear, while others are cloudy or colored.

Nevertheless, the Mitchell-Hedges skull stands out for a couple of reasons. For the most part, the skull is infamous for helping prove that the crystal skulls are not as ancient as some people believe.

Mitchell-Hedges Was No Stranger To Controversial Claims 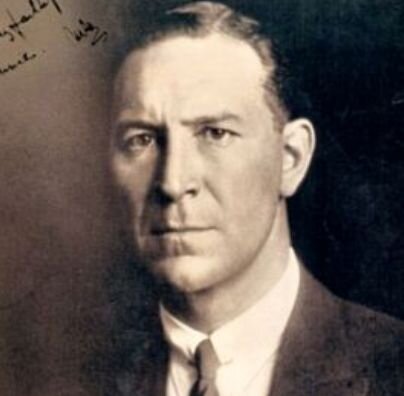 Mitchell-Hedges was famous for exaggerating his discoveries. He called the discovery "the skull of doom" and went on to explain that people had died for laughing at it while others fell seriously ill.

He also claimed that he had a reason for not revealing how the skull got into his possession. To his death, he never said how he ended up with the skull, and his daughter Anna kept its supernatural legend alive.

Anna appeared in television shows and toured the world, telling people that the Mayans had said that the skull could be used to "will death."

With the popularity of the Mitchel-Hedges skull, other skulls emerged with names like Sha Na Ra and Amar. One of them was known as Max the crystal skull.

The skulls were linked to a Native American prophecy that said that when the 13 of them were brought together, they would disseminate universal knowledge and secrets to help humanity survive.

Still, there is a catch: humanity has to be ready before the skulls can do their job.

The legitimacy of this wild theory was confirmed by the presence of crystal skulls in Paris' Musee du Quai Branly and London's British Museum.

Doubts About The Crystal Skulls Have Been Around For Decades 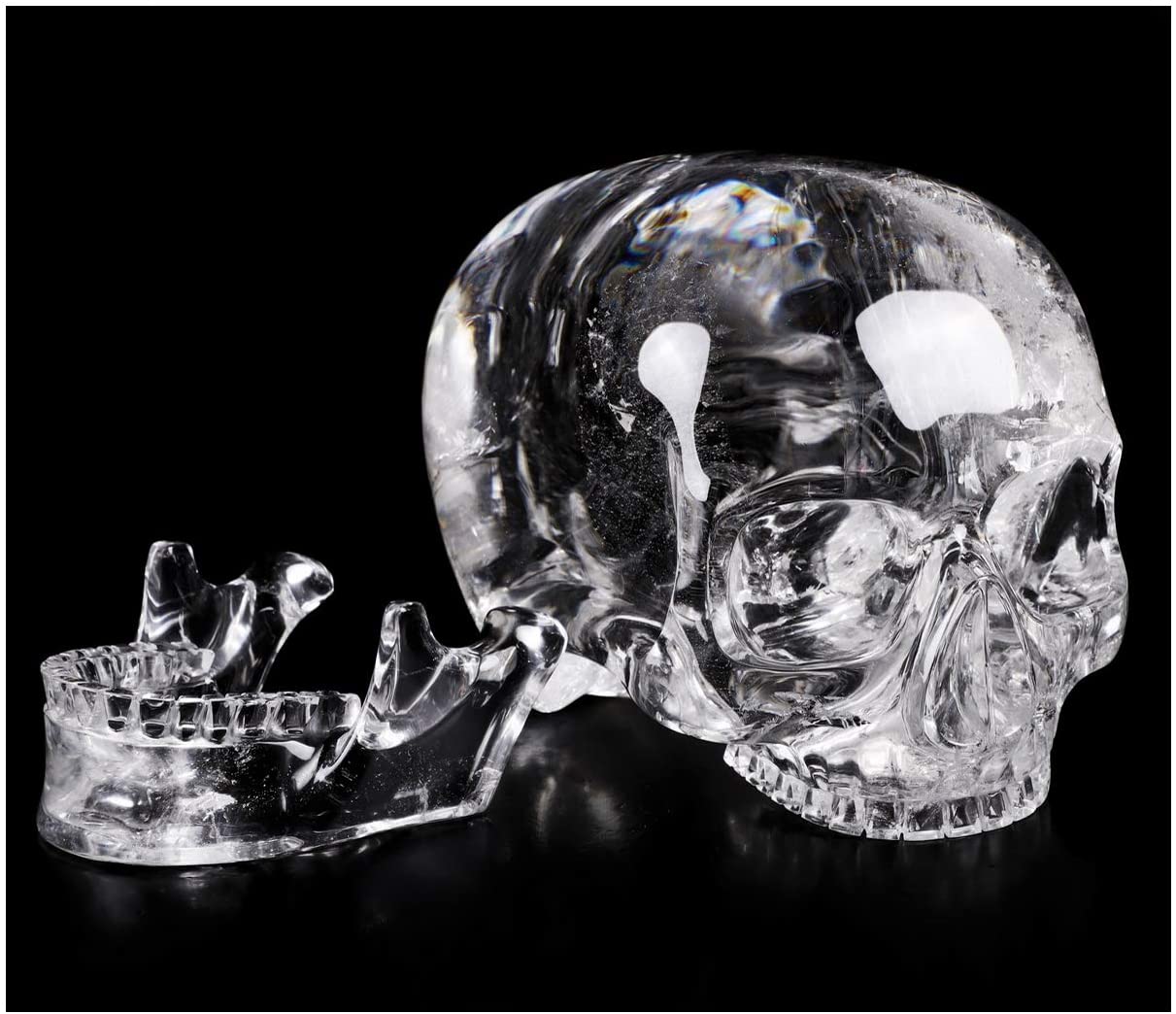 All along, anthropologists and scientists from the Paris and London museums denied that the crystal skulls came from Atlantis or outer space. Nevertheless, both institutions display the skulls as Mesoamerican Aztec artifacts.

That has not answered questions about their authenticity. People were still curious about the origin and the meaning of these crystal skulls.

There were doubts that the skulls were authentic Aztec artifacts because the depiction of the teeth was suspiciously perfect. The teeth were too symmetrical in the crystal skulls, while ancient Aztec skulls sometimes depicted the lack of teeth.

The Smithsonian Skull Helped Prove The Crystal Skulls Were Fake 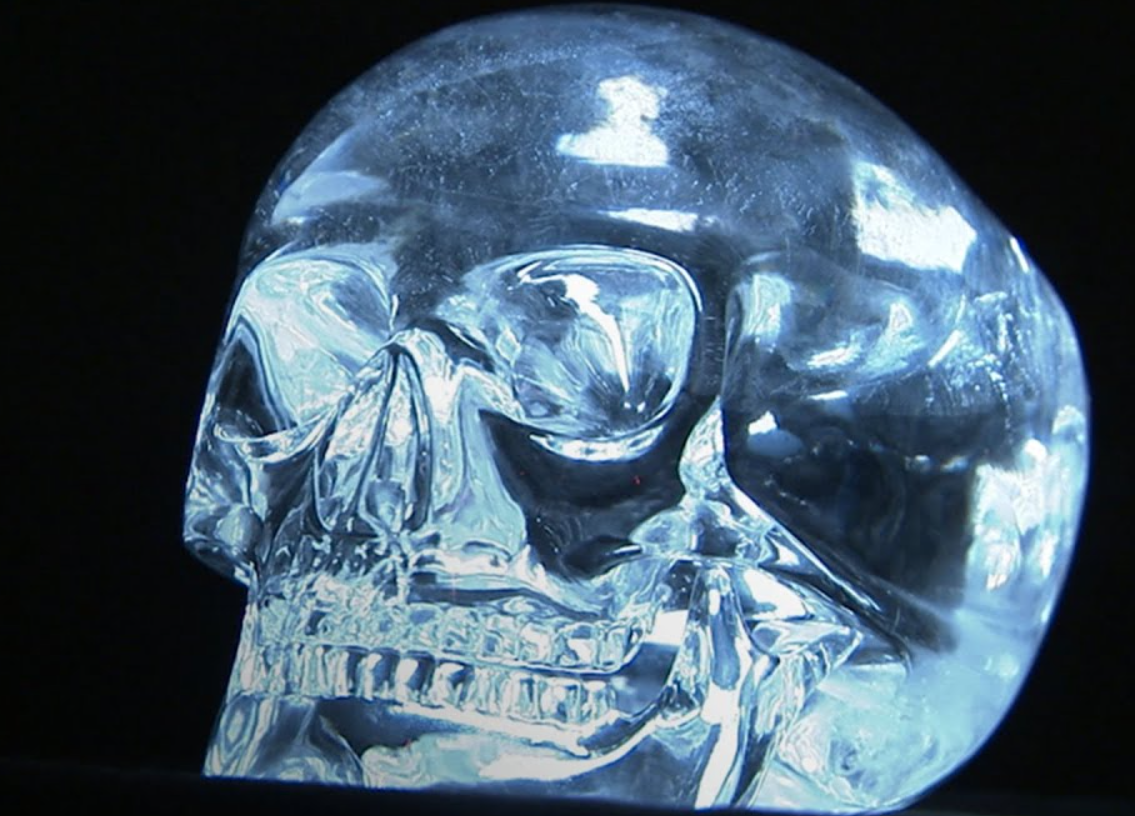 In 1992, the U.S. Postal service delivered a milky-white rock crystal skull anonymously to the Smithsonian Institute in Washington, D.C. The note claimed that a Mexican dictator previously owned the skull.

The skull was offered along with a note that said it was an Aztec skull bought in Mexico in 1960. That led to research by Jane McLaren Walsh, an expert in Mexican archaeology. Walsh started working with the Smithsonian Institute on whether the skull was really an Aztec artifact.

This finally helped resolve the mystery of the crystal skulls because many things were off compared to genuine Aztec skulls. The skull was big, and it seemed too polished and rounded.

She compared the skull with similar skulls and also used scientific techniques to find out the truth. Her quest for answers eventually led her to the Mitchell-Hedges skull.

Walsh immediately noticed that the crystal skulls were stylistically different from those shown in Mesoamerican art. The ancient skulls were crudely carved and usually made using basalt.

Quartz was seldom used in pre-Colombian artifacts, and archaeological excavations have never unearthed any crystal skulls.

Eugene Boban, And The Real Story Behind Aztec Crystal Skulls 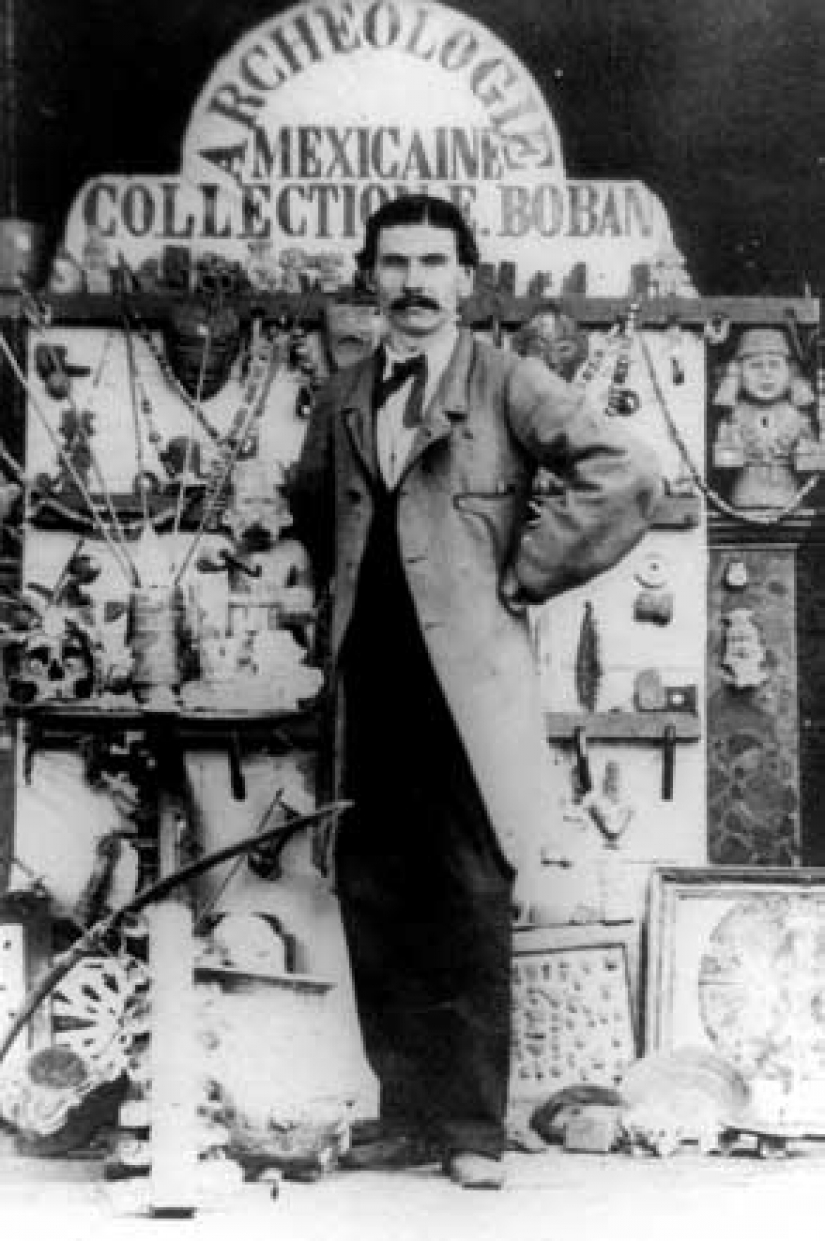 Walsh also considered the history of ownership of the crystal skulls. The Paris and British crystal skulls were traced to Eugene Boban, an amateur archaeologist and antique dealer from the nineteenth century.

Boban was an expert in Aztec artifacts, and he often took trips to Mexico to buy antiquities before taking them back to Paris to sell them at his shop.

Boban had no problem selling fake antiques. Still, the museums did not buy the crystal skulls directly from him.

He had sold the skull to an explorer named Alphonse Pinart, who sold it to another museum in 1878. This was after Pinart learned that the skull's authenticity was "doubtful."

The British Museum got their skull from Tiffany and Co., which had, in turn, purchased the artifact from Boban directly while he was in New York.

Before then, he had tried to sell it to the National Museum of Mexico, claiming that it had been dug up in a Mexican archaeological site. After realizing the skull was not what the seller claimed it was, the Mexican museum had backed off.

Scientific Research Was Done On The Crystal Skulls 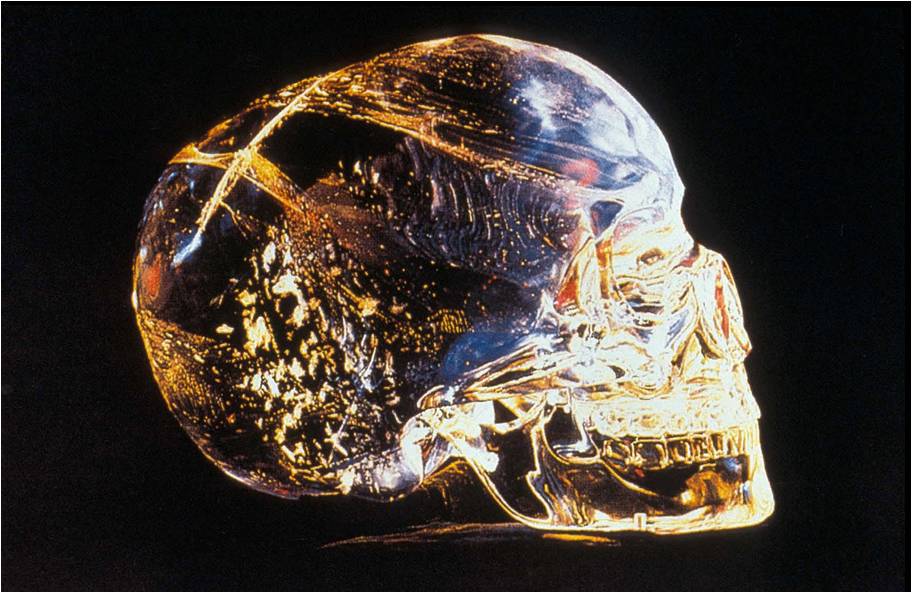 After Walsh established that the origin of the crystal skulls could not be trusted, she decided to use science to find out where they were made. With the assistance of the Smithsonian and British museums and Margaret Sax, a conservation scientist working with the British Museum, she set out to find out the truth.

The scientific research was based on the two skulls in Paris and London.

They could not use carbon dating because it does not work on quartz. After using scanning electron microscopy (SEM), the surface of an actual Mesoamerican crystal goblet was compared with the surfaces of the two crystal skulls.

While the goblet had irregular etch marks that showed they had been made using hand-held tools, the etch marks on the skulls were regular, telling a different story.

It was clear that the skulls were made using a rotary wheel, which did not exist before the Spanish conquest. Aztecs used tools like pump drills, a wood and rope device and left distinctive marks.

Additionally, Raman spectroscopic analysis was used to analyze the skulls. While it was clear that the impurities in the Paris skull were originally from Mexico, the impurities in the London skull, which were green and wormlike, suggested the quartz had been obtained from Brazil or Madagascar.

What was fascinating was that the Smithsonian skull provided a very different result. The skull had small silicate carbide particles, usually used to coat a rotary wheel to give the object a smooth finish.

Interestingly, the substance was not used for this role until the 50s.

In short, the crystal skull at the Smithsonian Institute was relatively modern. The general conclusion Walsh made was that the three crystal skulls could not be Mayan or Aztec, or even from Atlantis because they were too modern.

The Truth About The Mitchell-Hedges Crystal Skull 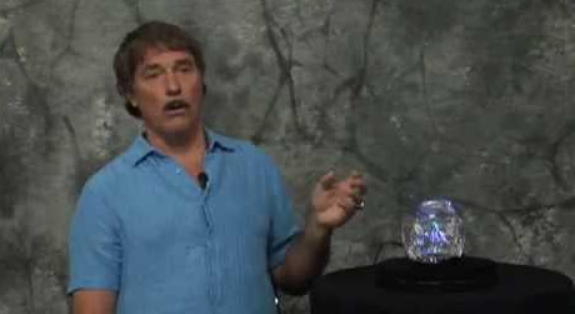 The mysteries about the Smithsonian, the Paris, and the London skull were solved. But, the mystery of the Mitchell-Hedges skull remained.

Nevertheless, according to Walsh, the Mitchell-Hedges skull was also a fake.

It was discovered that Mitchell-Hedges had owned the skull under the name of Burney Skull in Man, a British journal, in July 1936.

Burney was a London art dealer, and it was discovered that he had sold it to Frederick Mitchell-Hedges in an auction, which proved that the claim that the skull had been found at Lubaantun was a complete lie.

Anna Mitchell-Hughes passed away at the age of 100 in 2008, and scientific research confirmed that the Mitchell-Hedges was a recent creation. Walsh also discovered that it was nearly identical to the crystal skull at the British Museum, which means it might be its copy.

At the moment, the Mitchell-Hedges skull is currently owned by Bill Homann. 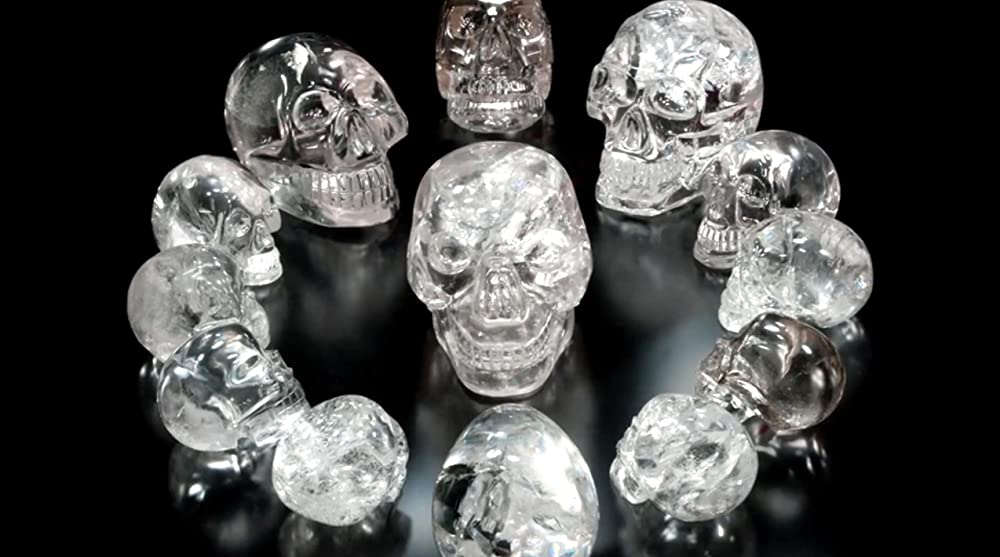 In the year Anna died, Indiana Jones and the Kingdom of the Crystal Skull was released, capitalizing on the legend of the crystal skulls. The film reignited interest in the myth surrounding the crystal skull.

Despite the mounting evidence about the origin of the crystal skulls, some are convinced that the skulls have an ancient origin.

These days, people can buy crystal skulls of all sizes on the internet, some of which have been "energized" using some of the thirteen famous crystal skulls. Indiana Jones fans are particularly fond of crystal skulls.

A lot of people still believe the crystal skulls have psychic powers. Others have claimed that the skulls have healing properties.

Even though the mystical aspects of the crystal skulls are hard to prove or disapprove of, the only thing that's for sure is that the artifacts are fake and aren't hundreds of years as previously claimed.

A book has also been written to debunk the ridiculous myths about the skulls titled The Man Who Invented Aztec Crystal Skulls: The Adventures of Eugene Boban.

On the other hand, a book by Shapiro, Mysteries of the Crystal Skulls Revealed, claims that the skulls are like computers that can record energy and vibrations around them and will later replay these events and memories in the distant future.

The museums added the skulls to their collections because they did not know enough to determine they were fake. When experts took a better look, the truth was uncovered.