The Tennessee police officer who was fired for engaging in sexual relations with six of her colleagues had previously faced termination for frequently crashing her patrol car.

Maegan Hall was dismissed from the La Vergne PD last month following an internal investigation that found she had engaged in oral sex while on duty, removed her bikini top at a party, and solicited another officer for a sexual encounter involving his wife. 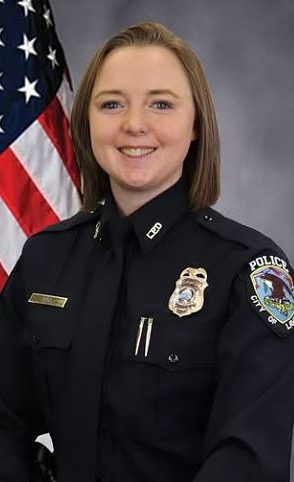 The 26-year-old officer was already on her final warning after causing significant damage and injury to herself in a number of car accidents that were deemed preventable, resulting in significant financial losses for her department.

According to documents obtained through a freedom of information request, Hall's first of three car accidents occurred in November 2021, which was nine months after she joined the department. 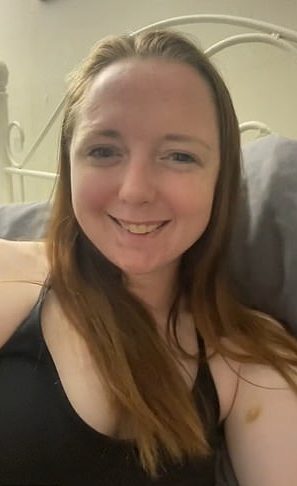 According to the report, Hall was responding to a report of a threat involving a weapon at the time of the accident.

"While responding she traveled on Floyd Mayfield and crossed over the dip at Sand Hill at a high rate of speed. 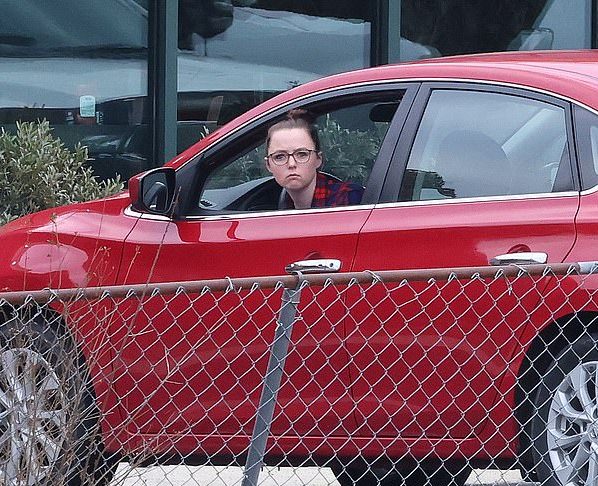 "She failed to slow down going through the intersection. This resulted in functional damage to her patrol car of $1,000."

Hall, who stated last week that she is focused on "moving on" with her life, was again in trouble the following year when she collided with another vehicle, resulting in a one-day suspension. 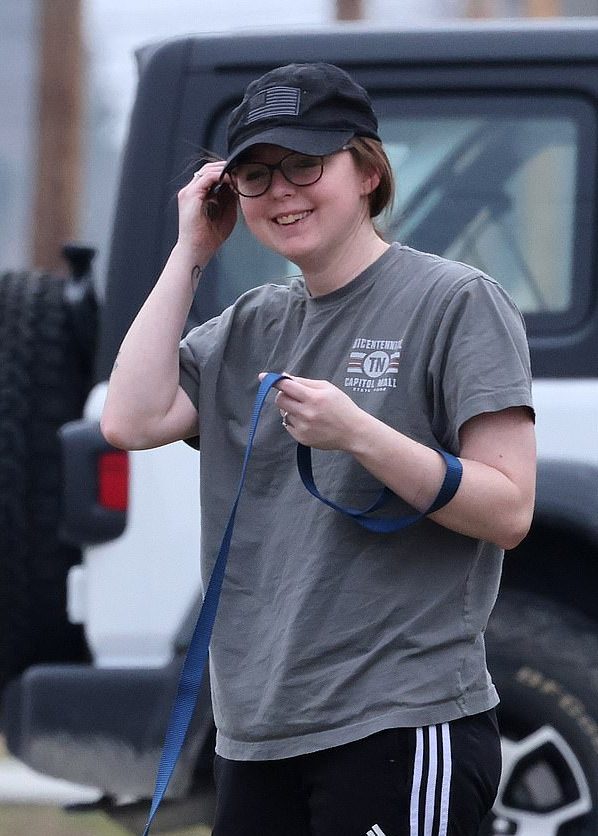 "She states she was attempting to merge lanes due to her lane ending on to Murfreesboro Road,' reads an account of the July 14 crash.

"Hall states she thought the driver of the vehicle in front of her had already merged and accelerated onwards. These actions caused a collision between the vehicles. Initial repairs for both vehicles are between $3,000 and $4,000." 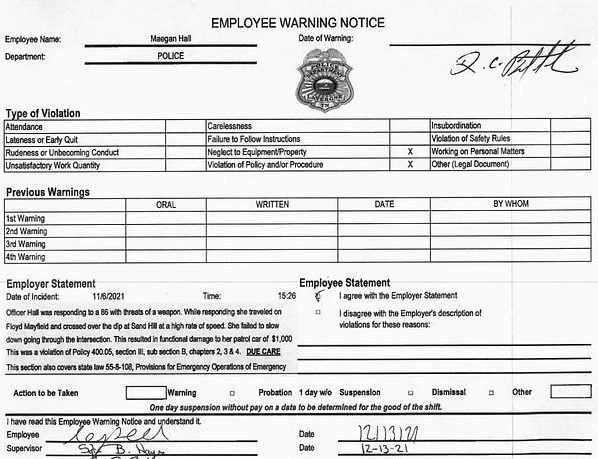 On this occasion, while leaving the police station to respond to an assault, she pulled out across multiple lanes of traffic, resulting in a collision with a van. 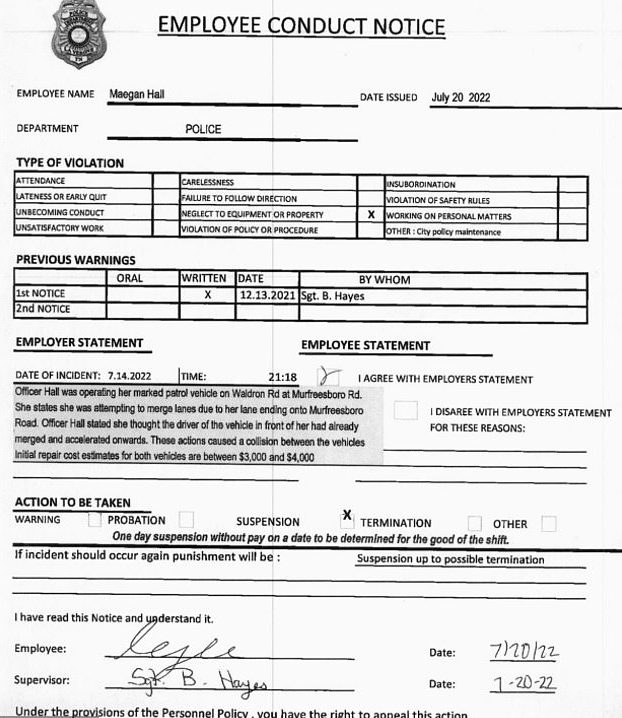 "Both vehicles ended in the center median with substantial damage to the van and Officer Hall's patrol vehicle. Officer Hall was injured in the crash and taken to Stonecrest Medical Center," a report states.

Hall received a final warning and was informed that she would face termination if she had another preventable accident within a year. 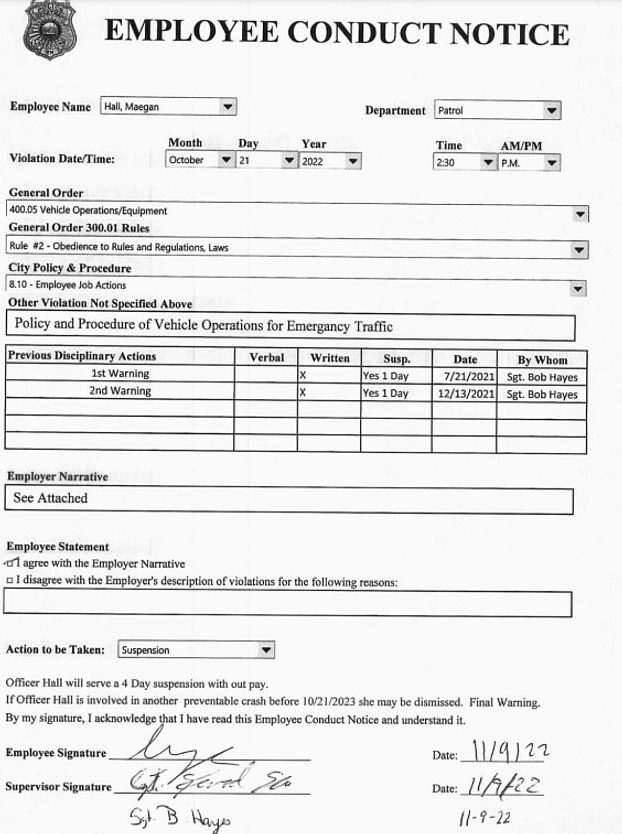 However, her two-year career as a police officer ended several months later when a whistleblower reported that a female officer was engaging in intimate relationships with male colleagues at parties, hotels, and even on police property.

An internal investigation found that Hall had engaged in oral sex with Sgt. Lewis Powell and Detective Seneca Shields while on duty, and had also had relationships with Patrol Officer Juan Lugo and possibly Sgt. Ty McGowan, all of whom were subsequently fired. 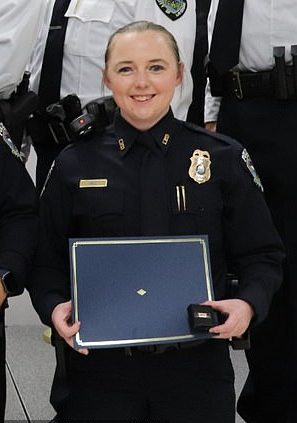 It was also noted that some of these individuals had their own history of disciplinary issues, with McGowan, a veteran officer, having been previously flagged for insubordination and poor work performance.

According to police documents, he also had a previous history of engaging in sexual relationships with colleagues dating back to 2007. 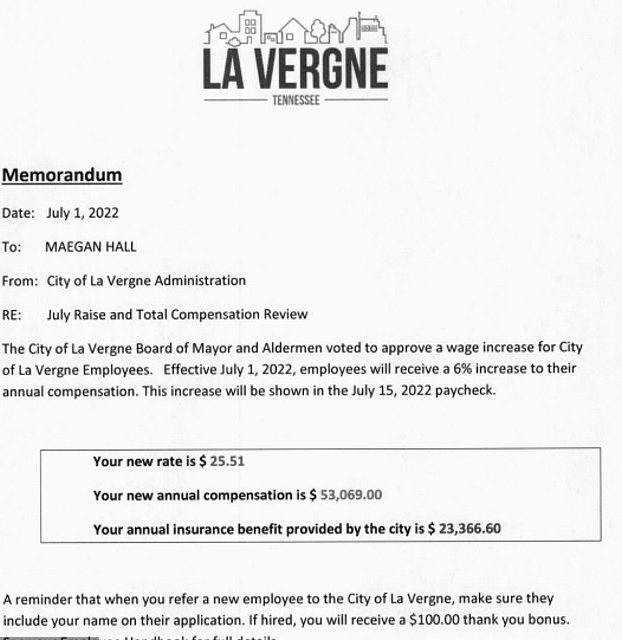 Shields had been previously reprimanded for sending personal emails on his work computer, tardiness, and reckless driving during a severe rainstorm.

Holladay was previously caught smoking in his car, and Lugo received a written warning for driving on the shoulder during a pursuit without activating his lights and siren. 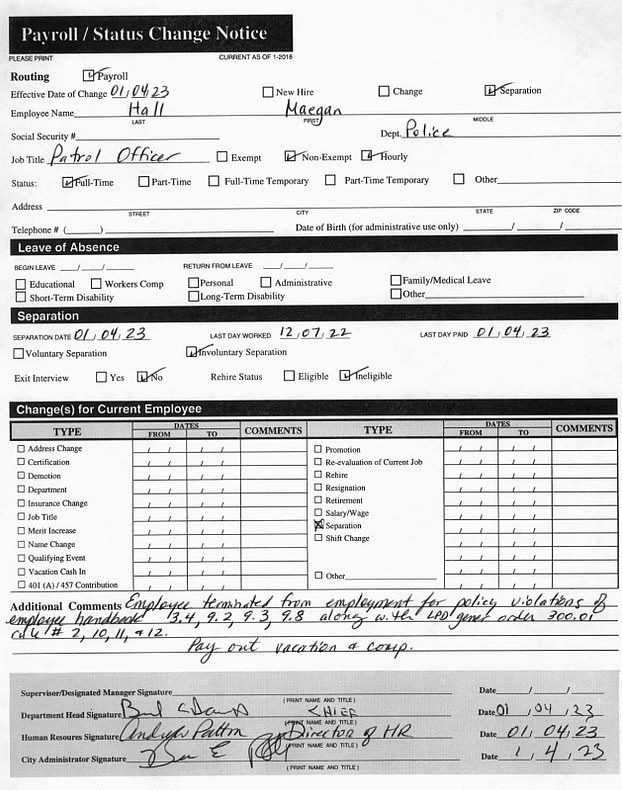 Hall had boasted to her hard-drinking group of police officer colleagues that she was in an open marriage and attempted to recruit her sheriff's deputy husband for swinging sessions.

However, the internal investigation revealed that Jedidiah Hall, who comes from a conservative background, was not interested and instead confronted his wife of four years about her infidelity.

Jedidiah, 28, a former state park ranger with a master's degree from Middle Tennessee State University, is remaining with his wife and attempting to work through their issues despite her infidelity.

The couple has been together since their college days, got married in November 2018, and in March of last year, purchased their first home in Manchester, located 60 miles south of Nashville.

"I don't know how he's doing it, he's more of a man than I am, but he's trying to salvage his marriage," Jedidiah's boss, Coffee County Sheriff Chad Partin, told the media. 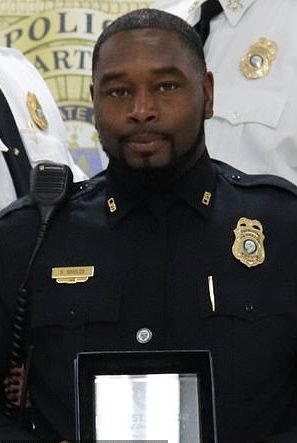 Hall, a petite blonde, grew up in rural Tennessee with aspirations of becoming an actress, but eventually found a temporary calling in law enforcement.

The investigation found that she shared intimate sexual photos with several officers at the La Vergne Police Department, including McGowan, Holladay, Lugo, Shields and Schoeberl.

During the investigation, Detective Shields attempted to deceive investigator Andrew Patton, the head of human resources for the police department by denying his involvement and protesting: "I have never had sex with Maegan Hall." 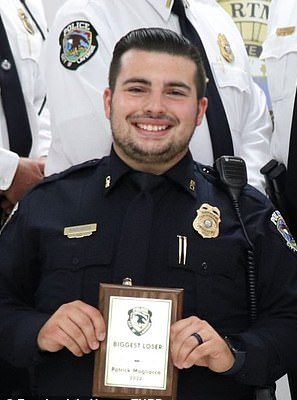 When questioned about sexual acts, he admitted to receiving oral sex at a police gym, and then returning to his desk to complete his shift.

According to Patton's report, which was published on December 28, Powell, a married father, was also on duty when Hall performed oral sex on him inside their station. 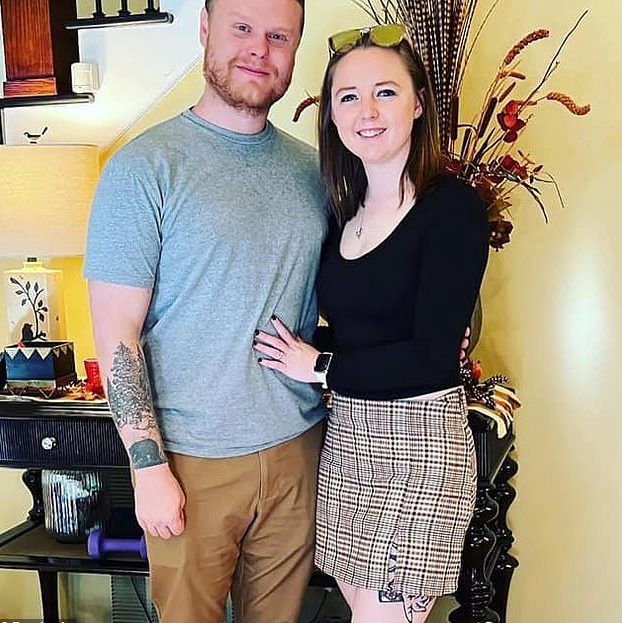 Powell initially denied the encounter, but admitted to it when it was discovered that he and Hall, who has heavily tattooed, met in December to coordinate their story in an attempt to hinder the investigation.

Holladay reported having "multiple sexual encounters" with Hall at his house and hotels, as recently as November. 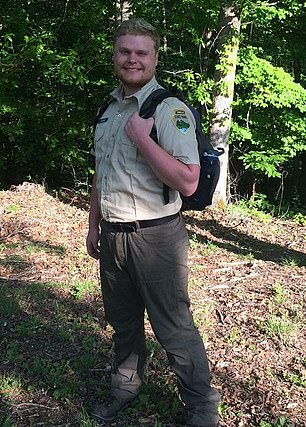 Magliocco also reported sexual encounters with Hall and revealed that his wife Amy was also involved in a Spring 2022 attempted to coax Jedidiah into a night of bed-swapping.

"Magliocco told Patton that at one party, Hall and Magliocco's wife started kissing and Hall's husband [Jedidiah] came in the room and seemed upset,' the report states. 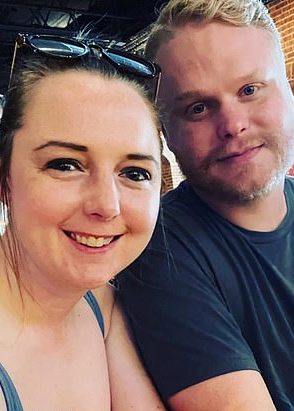 "The next day on‐shift, Magliocco asked Hall about the husband's reaction, since Magliocco was under the impression from Hall that her marriage was open as well. Hall said, 'He really wasn't on board."

Magliocco also admitted to giving Hall vodka and having drunken sex with her at a "girls gone wild" party on a colleague's houseboat during Memorial Day celebrations.

When Patton questioned Hall about the party, she confirmed that her bikini top had been removed in the hot tub and that she had been so drunk that she fell down a flight of stairs. 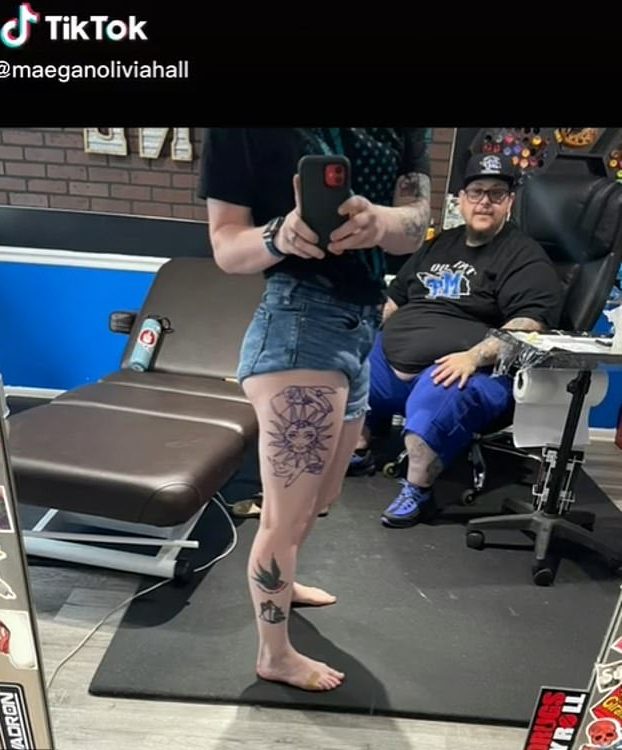 Hall also admitted to additional sexual encounters with Lugo and McGowan. It was later revealed that McGowan was the individual who had initially provided the information to the Mayor's office through a whistleblower tip.

Although McGowan had provided information about the relationships of his colleagues, he did not reveal his own liaisons with Hall and was "rude and extremely verbally aggressive" when questioned about it.

"McGowan struggled to share that when Hall was a candidate and in process of being hired, Hall and her husband [Jedidiah], McGowan, and another female met up at her house,' the report states.

"During that meeting, Hall was naked, the other female got naked, and Hall's husband got upset."

Additionally, McGowan was found to have committed workplace violence when he grabbed a city employee by the throat in an attempt to intimidate her.

"The actions of a few do not represent the department as a whole," insisted Police Chief Burrel 'Chip' Davis. This was after the police officers made national headlines for their actions.

The large number of firings and disciplinary measures resulted in La Vergne, a town of 39,000 people located 20 miles southeast of Nashville, losing approximately 12% of its police force overnight.