It's not always roses and butterfly gardens for employers. They struggle to find the right workers for lower-paying jobs, and it is getting even harder in some of the smaller towns.

This fact was one of the many reasons why a Canadian company came up with an idea to offer a job and two acres of land to anyone who would accept to relocate and come work for them.

Guess what? It worked!

Everyone who is putting an effort to try and find a job knows how there can be some offers that one should never miss.

The two sisters Heather Coloumbe and Sandee Maclean are the co-owners of The Farmer's Daughter Country Market in Whycocomagh in Cape Breton, Nova Scotia.

Since it is open throughout the whole year, it usually needs 100 people to maintain function. But believe it or not, this tiny town has a population of just 400 people, and there are some days when it's a challenge to find any workers.

Struggling to find good workers in a petite town on the east coast of Canada, they are familiar with the importance of a good job offer.

Heather and Sandee usually hired students, but nearly all of them needed to go back to school in the fall. Having no staff to replace them, the market would have to close.

The sisters decided to try and find people following the traditional way. All ads were put on places like Service Canada, but the only response they got was from people overseas. There were no local people that applied.

"We looked into doing immigration and stuff, but that was going to take too long. So we actually put ads on Kijiji right across the country, but we didn't get anyone there either."

However, Sandee came up with an idea while hiking Campbell's Mountain.

Using The Ace In The Pocket

If there's one thing that comes to mind when you mention Farmer's Daughter, it surely is land. A lot of it.

Maclean thought that maybe they should change their game.

This is how they decided to offer two acres of their wooded land for free to their new team. The new employee would come to live there in a tiny home or cabin and work at The Farmer's Daughter.

"We cannot offer you big money (wages in local small Cape Breton businesses are not high), but we can offer you a great incentive to come and try us out."

"One thing our business does have is LOTS of LAND. If you decide this opportunity might fit your dreams and goals for a close to nature and community-focused life, then we are willing to offer you 2 acres of woodland where you can immediately set up your tiny house or quaint cabin. Plus give you access to our farmland and other resources we have available."

"If you are still working with us after five years and we all still like each other after that time, then the land is yours for the cost of migrating it out and putting it in your name." 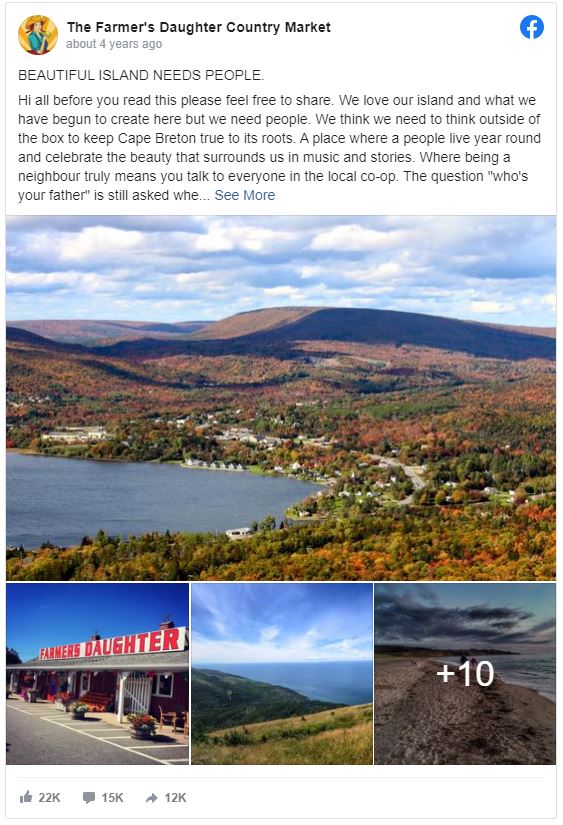 And suddenly, an unexpected plot-twist occurred: the post went viral.

They didn't imagine that a week later, their offer would encourage over 4,000 applicants to respond to the ad. Then the numbers jumped to 300,000 people.

The initial idea was launched in 2016, but their website still has a job-land agreement in the employment section.

In case you are legally allowed to work in Canada, this sounds like something worth giving a try.