A man found himself in a situation where he had to put his life on the line for his beloved dog. His large canine was caught in the jaws of a hungry bear.

Kaleb Benham wasted no time and jumped into action. He forced the bear's jaws open in an attempt to free his dog, Buddy.

Surprisingly, this daring stunt managed to save his dog's life.

If you are a pet owner, you understand how important these pets can be to someone's life. That is why many pet owners cannot stand to see their beloved furry friends in pain, especially when you have lived with the pet for several years.

The fearless dog owner recounted the peril he and his dog were in during the ruthless bear attack. 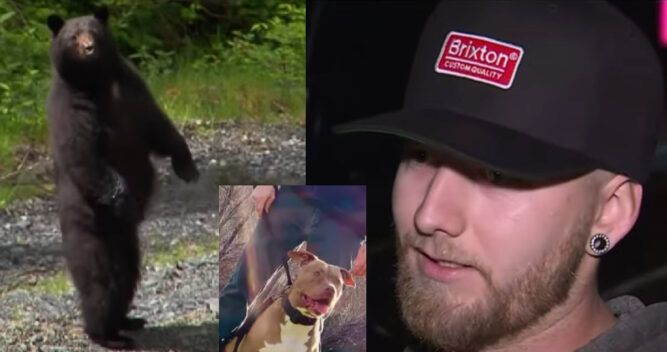 The bold man is from Grass Valley, California. He has never imagined that one day he would ever have to fight a bear, let alone get away with his life after the encounter.

Apparently, the man was out playing with his dog, a 90-pound pit bull named Buddy. They were having fun moments close to his home.

However, the happy moments quickly turned into a living nightmare after Kaleb noticed that his canine friend was under attack.

The Man Saw The Bear With His Dog Between Its Teeth

Kaleb said that he heard a growl, and after looking about 75 to 100 feet down, he saw a bear dragging his pet away.

It was a grisly and horrifying sight:

"… the bear was dragging [Buddy] by his head, had his head in his mouth."

Needless to say, having a physical fight with a bear is not a mean feat. For Kaleb, however, this was a fight worth getting into since it meant the difference between life and death for his beloved pet. 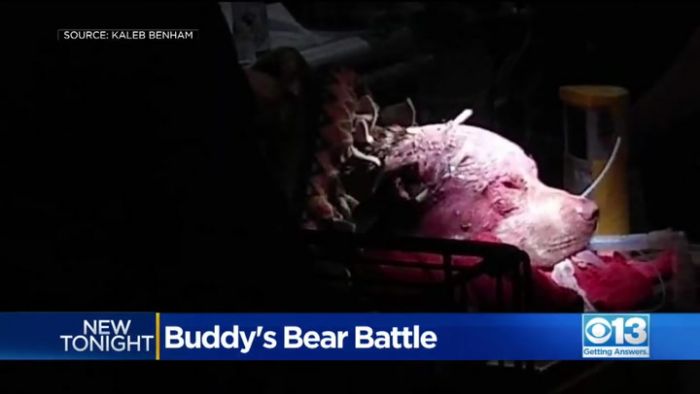 According to Kaleb, the only thing he could think of was saving his "baby."

So, he ran, "… plowed into the bear, tackled it and grabbed it by the throat and started hitting it in the face and the eye until it let go." 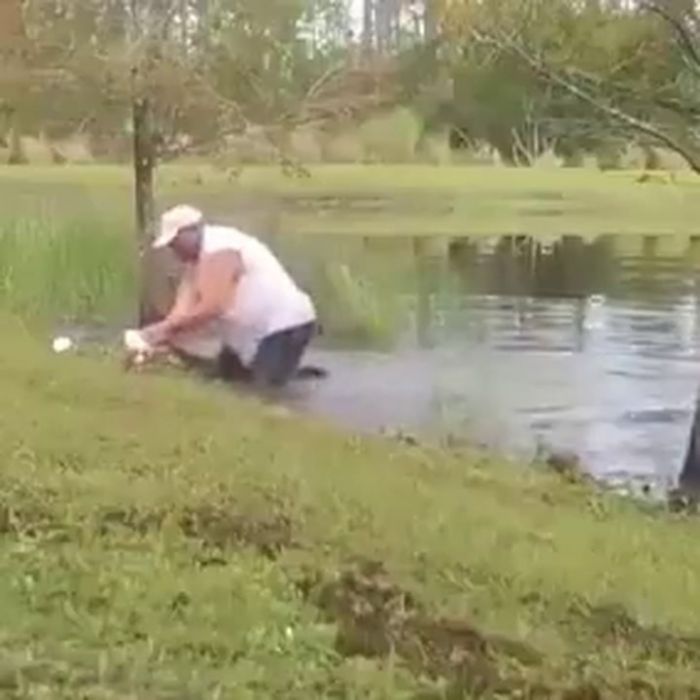 Time was not on his side during this dangerous fight. After all, he had to free his dog from the jaws of a fierce 350-pound bear.

Luckily, he managed to pry him from the beast's teeth and rush him to the vet.

Because Of COVID-19, The Nearest Vet Was Closed

Unfortunately, the closest vet was closed due to COVID-19, but he still didn't give up on his beloved dog.

A man’s love for man’s best friend is a powerful force. Kaleb Benham from Grass Valley took on a 350 pound bear that was attacking his rescue dog, “Buddy.” Kaleb said he heard a growl the saw the bear dragging buddy “by his head.” So he tackled the bear and punched it pic.twitter.com/XAhTrS2AEC

However, God must have been on his side because, in his desperation, he found a vet open and willing to give his dog the necessary surgery.

"I just stood there and watched through the window for 3 ½ for hours."

Buddy was in pretty bad shape. His treatment involved getting stitches, staples, and tubes put into his head to make the fluids drain off.

Fortunately for Kaleb, the desperate effort he made paid off handsomely. The dog is now recovering well.

The Bear Is Waiting To Attack Again

Buddy’s face was severely damaged. His ears had to be stapled back on. But he’s recovering! Kaleb and Buddy spent Thanksgiving laying in bed resting, but they’re more thankful than ever. Photo of Buddy as Kaleb watched from outside the operating room ⬇️ pic.twitter.com/T8IhDjkvLs

Kaleb is still concerned about the bear, which is still roaming free close to his home. The animal won't leave them alone.

In fact, the bear has paid them a visit many times after the attack, probably hoping to finish the job it had started.

"… its food got taken from it and it wants it back…"

So, although Kaleb and Buddy already won the greatest battle they could face against the ravenous bear, the fact that the animal is still lurking around their home waiting to pounce on Buddy a second time is still a massive loose end.