Hundreds of thousands can't get enough of this wholesome video capturing a bunny chomping a snowman's carrot nose.

A bunny eating a carrot sounds like something many would only see in a cartoon movie or show unless you have a bunny pet or live in Canada!

One family from the Cambrian Heights suburb in Calgary recently filmed a bunny nibbling a snowman's carrot nose in their backyard, and people can't get enough of it. 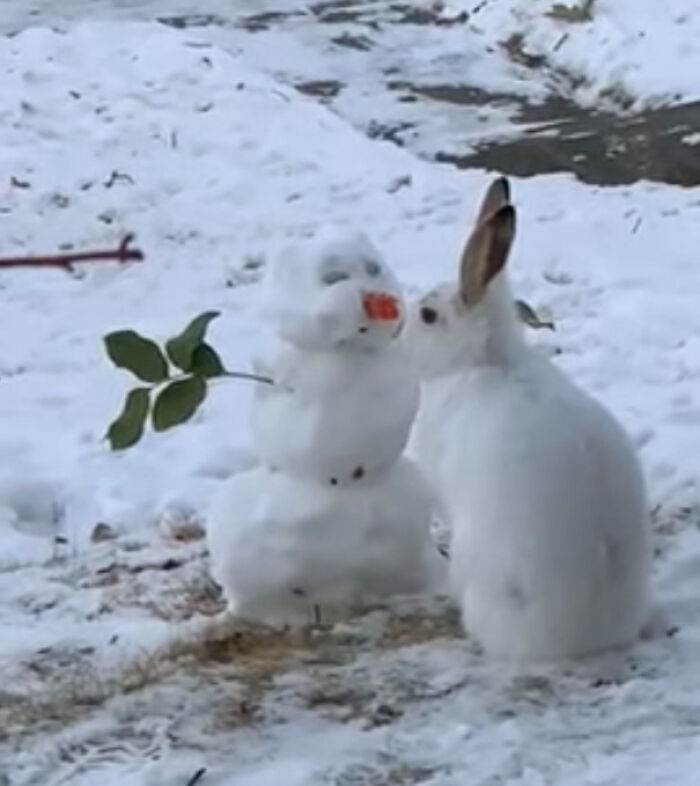 The family had built the snowman for some delight.

In the clip, it seems like the hungry bunny, which is as tall and as white as the snowman, was enjoying the tasty decorative treat immensely.

Now we're wondering what happened to all those carrots we stuck in our snowmen's faces over all these years.

But one thing's for sure; we will be keeping a closer watch with our cameras from now on.

It seems like the bunny gave the snowman little snow kisses at the end.

The bunny eventually devoured the entire carrot, leaving only a small chunk behind.

According to CBC, Sheila Bryant filmed the bunny with her phone after seeing it come near the snowman and stand on its back legs.

Meanwhile, Hannah Bryant took a few pictures as other family members family watched the magical scene unfold in the snow outside their home.

In the video, the family can be heard exclaiming that the bunny is giving the snowman a kiss.

After sharing the video on YouTube, it gained traction, with more than 128,000 views at the time of writing.

The sight is incredibly wholesome. However, you should keep in mind that carrots shouldn't be a bunny's primary source of food.

Why? Carrots are full of sugar and you should treat them as treats. Thus, you should only serve them to rabbits in small amounts as rewards.

If you have a bunny at home, opt for hay, grass, leafy greens, or some food pellets instead.