The WNBA star who was sentenced to nine years in a Russian prison in August is now free. She has since gone back to the United States.

Brittney Griner got back home through a prisoner swap on Thursday, which put her 294-day stay in a Russian prison to an end.

The arrangement was approved by President Joe Biden. 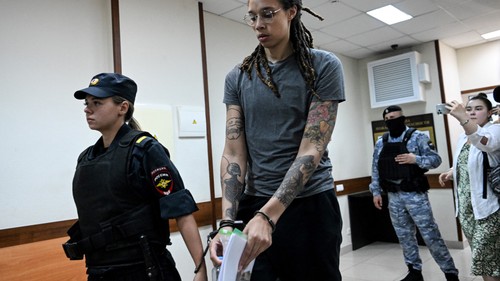 According to the media, Biden is set to speak at the White House with regard to the arrangement. Reports claimed that Paul Whelan, a former marine who faced accusations of spying in Russia, was not involved in the deal.

Biden tweeted about the arrangement, and he was seen in the Oval Office with Cherelle Griner, Griner's wife, and Vice President Kamala Harris.

Moments ago I spoke to Brittney Griner.

As Biden and Cherelle announced the news at the White House, the US president said:

"This is a day we've been looking forward to for a long time... It took hard and tough negotiating."

Biden said that despite the needless trauma, Griner was in "good spirits" and "relieved to finally be heading home."

He also promised that Griner would be back in the country within a day. Biden also said they had not forgotten about Paul Whelan, whose release is yet to be secured.

The president promised that they had not given up and "will never give up" on Whelan.

Griner was initially detained in February at Sheremetyevo Airport in Russia after she was found with less than a gram of marijuana oil.

Eventually, Griner pleaded guilty to drug possession and smuggling charges. She argued that she had a doctor's prescription for the drug and had mistakenly packed them for her trip.

After seven months of detention, she was sentenced to 9 years in prison. This was just a year less than the maximum sentence for the offenses she had committed.

Her attempt to appeal her harsh conviction in October failed. A month ago, she was sent to a remote all-female penal colony, which is famous for its brutal treatment of inmates.

After Biden succeeded in getting Griner freed, her wife Cherelle thanked him for making her family whole.

She also reminded him that so many families were not whole, and promised that Brittney would remain devoted to getting every American home, Paul Whelan included.

It took months of negotiations for the Russians to accept a one-for-one swap. They also said they would not release Whelan.

Bout is a former military official who inspired Lord of War, a film featuring Nicholas Cage. He had already served 11 years of his 25-year sentence for his plans to kill Americans.

He was also accused of committing terrorism-related crimes.

Bout would have been released in 2029 but was instead exchanged for Griner.

The official involved in the swap said that they had no choice about which American to bring home. Their only choice, the official said, was bringing Brittney Griner home or letting her remain in a Russian prison.

According to the media, the official had claimed that getting Griner released was a "moral decision."

The state also plans to avoid such incidences in the future, and this will include giving travel restrictions to foreign officials who are implicated in the wrongful detention of Americans.

It might seem like her friends and the government were quiet during the early months of Griner's detention. However, they were trying to make sure she was safe before making a move.

The government faced a lot of criticism for its inaction considering that Griner is among hundreds of WNBA professionals who play internationally to supplement their poor salaries.

Griner's predicament brought to the fore the discussion about WNBA players getting a fraction of the pay their male colleagues get.

For the 2023 season, WNBA is changing its policies so that players who make international games a priority get penalized. This is supposed to encourage them to stay at home.