If you thought that all celebrities have perfect lives and handle everything by the book, this might surprise you a little.

It is true, even famous people sometimes can't cope with their everyday tasks.

One of the most popular teen-stars these days, Billie Eilish, has revealed that adulthood still looks like a myth to her, and there are many things that she struggles with.

For example, she bought 70 boxes of cereal during the lockdown period.

Billie claimed that she simply has no idea how to be an adult and doesn't know how much things exactly should cost.

The American singer and songwriter shot to fame in 2019 when she was only 19 years old.

Her debut studio album called, When We All Fall Asleep, Where Do We Go? became one of the best-selling albums that year.

However, this was not Billie's first attempt in the music world. She had been working on her songs and music materials since she was a 13-year-old girl.

Being devoted to your true talents from an early age completely changes the whole picture.

And no matter how Billy makes jokes on her account, she's far from being the bad guy in adulthood.

While most of us were enjoying the perks of our childhood and completing the milestones of our young-adult era, she'd been thrown head-first into a world of sold-out arena tours.

Despite the fame and the confirmation for owning such talent, she missed out on some of the more normal pastimes like grocery shopping.

Maturity Comes With A Price

Being present in the adulthood world from her young adult days, in some way, has helped her to become more mature very quickly.

But of course, everything comes with a price.

Recently, Billie explained how she felt enlightened for discovering ordinary but smart things.

She admitted how she found out about the joys of online shopping during the pandemic.

And then, when she realized she honestly has no idea how much things are supposed to cost, another plot-twist saw the light of the day.

"I don't know what things cost because I've never been an adult before.
And, you know, I grew up with no money."

Usually, our parents are those who do the shopping.

And when children come of age, they step into the adult world completely clueless about ordinary things.

How Much For The Froot Loops?

"It's a really weird position I'm in.
I feel kind of stupid because I'm like, I don't know how much Froot Loops are. I tried to order one box of Froot Loops and I was like, 'Oh yeah, sure. It's $35'."

Something smelled fishy, and she knew that this can't be true.

But she didn't pay any attention to the details. And we all know how being detail-oriented is a key point in managing your adult life at its best.

So, instead of ordering the full-size Froot Loops pack, she ended up ordering 70 little boxes of single-serve portions packed into one box of cereal. 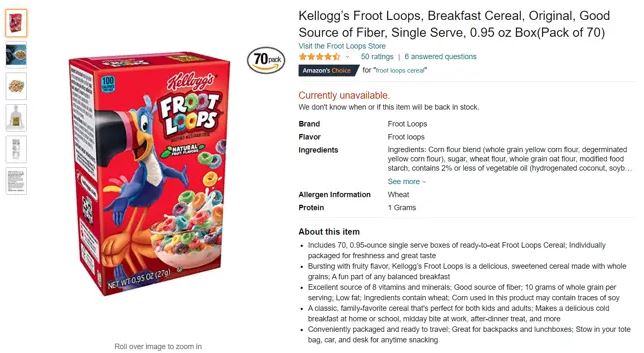 Blessed be the Froot Loops!

Billie also shared some memories of the scars that her childhood days have left.

"When I was growing up and I was around my group of friends back then, and they would all be drinking and smoking and doing drugs and whatever, I think because of the way that my personality is - I'm a very strong-willed person, and I think at the time I was very alpha - I'm coming to realize that I may have felt a feeling of superiority."

She experienced grief at only 15 when a friend took an overdose and ended up in rehab.

Besides, she added that as long as her friends keep away from hard drugs and stay safe, she's not too worried.