'Don't leave the PARTY behind — take it with you'! Police arrested and charged a man with drunk driving after they found him riding a motorized beer cooler while intoxicated.

While most of us will think of cars when we hear the phrase 'drunk driving,' the term really has 'endless' possibilities.

For instance, you can't drive a motorized beer scooter while under the influence of alcohol, at least not in Australia.

The officers also said that the motorized cooler — called an Esky in Australia — was potentially dangerous and contained a booze supply.

In a statement, they said:

"This motor vehicle would only be able to travel at very low speeds."

"And with the lighting devices on, the beer scooter would be negligible and make it very difficult for other motorists to see." 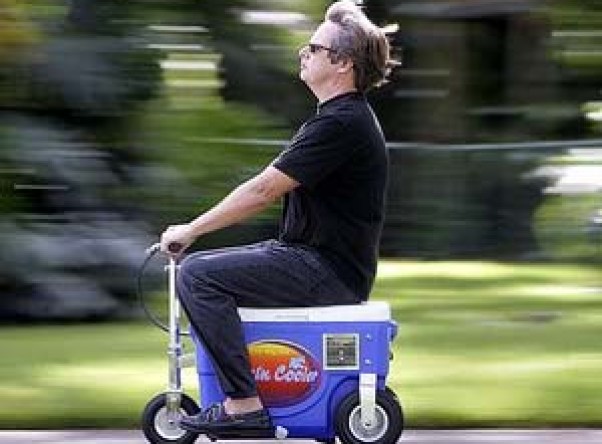 Strangely enough, this isn't the first man to find himself in trouble for driving a beer scooter while drunk.

The officers found beer, cask wine, and bourbon pre-mix drinks in the box.

Another man lost his license for nine months after pleading guilty to drink-driving a motorized beer scooter in a similar incident.

Christopher Ian Petrie, 23, was driving the beer cooler with a four-stroke engine with a top speed of 20Km/h.

In court, magistrates ruled that the beer scooter qualified as a car and fined Petrie $500.

Petrie claimed he was just taking the beer scooter for a 'test drive.'