Amber Heard's IMDb has been renamed "Amber Turd" on Google for a brief moment. Though the corrections have been made, the Internet never forgets.

Amber's name has been changed within IMDb's CMS, TMZ reports. The name change was visible when you Google Heard's name, as it appeared as Amber Turd on the movie database. When you clicked on the website, it was still Heard. 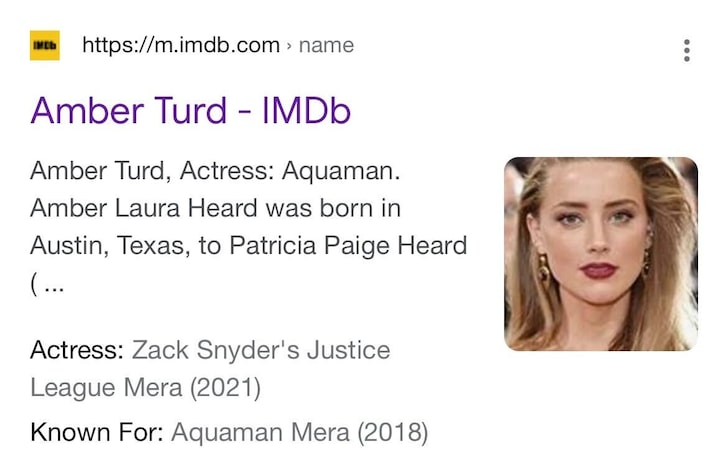 The misspelling "Turd" appeared on both mobile and desktop browsers.

The Depp vs. Heard trial is on break, but this bizarre change is just another in a sea of stunts since the trial started on April 11.

Amber Heard pooped on Johnny Depp's bed and then blamed it on their tiny yorkies. This is NO tiny dog poop. Amber Heard is disgusting🤢#AmberTurd pic.twitter.com/fxNhInNeZV

The unflattering nickname refers to the alleged "present" Amber Heard gave to Johnny Depp after her birthday in 2016.

As per the sources close to the actress, one of the Yorkies was responsible for the pooping incident on the couple's marital bed. Depp and Heard had two Yorkies.

However, a bodyguard for Depp testified that Amber said it was a "horrible practical joke gone wrong."

Depp found the whole thing to be "grotesque," though it appears that the memory amused him.

Perhaps he was just as disgusted as the rest of us.

The trial will continue in a few days, with Amber Heard under cross-examination. Undoubtedly, the fecal matter will appear its ugly head, so it will be interesting to hear Amber's side of the story.

Though the trial is about alleged domestic abuse, certain moments seem too bizarre even for Hollywood.