It was supposed to be an uplifting live-action remake of one of the beloved stories about Ariel, the Little Mermaid, her friends, and falling in love.

It is still unclear why the first trailer faced so many "dislikes" on Youtube. Still, things only escalated as an artificial intelligence artist tried to "fix" Halle Bailey's Little Mermaid with someone resembling a white woman. 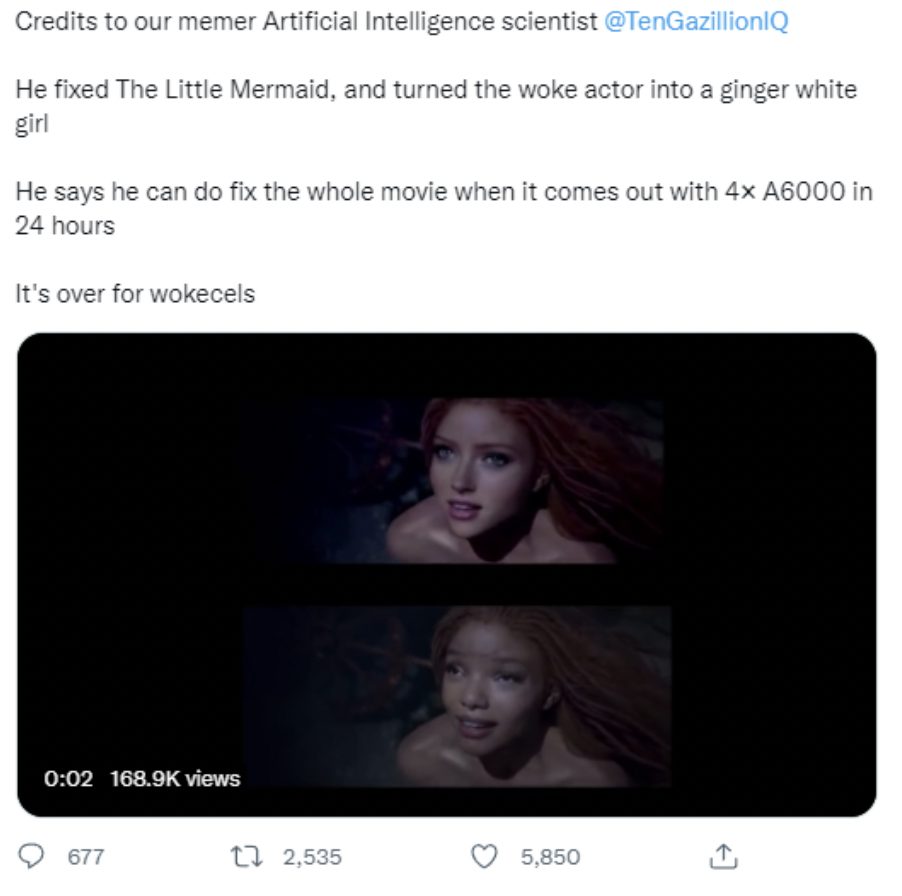 Before we get to these creepy face swaps, let's see what Halle had to say about her role.

The movie premiered just a few days ago at the D23 Expo fan convention and was very well received.

"The fact that now it's getting to be played by me, a person who looks like me, a woman of color, I'm like, wow, I'm so grateful for what it will do for all the other little Black and brown boys and girls who will see themselves in me. Because I know if I had seen myself when I was younger, I think my whole perspective would've changed."

🎶"Wish I could be part of that AI"🎶 pic.twitter.com/C1V8xogBgq

Now back to what caused the backlash even before the premiere.

Many claimed that the 1989 animation sees Ariel as a white woman. She looked a bit yellowish, and since Hans Christian Anderson's fairytale developed the character, yes, it was safe to assume that his vision was also a white Ariel.

can't imagine why this would make people upset, I have been informed by twitter that mermaids aren't real so it doesn't matter what race they are

The tweet from a suspended account responsible for Halle's dramatic change into a white woman said that the new version turned "the woke actor into a ginger white girl."

I'm not racist, I just "fixed" a kid's movie by changing the main character's race. Totally not racist.

It continued by adding that this was an education tweet, not racist, adding:

"I am just amazed by a high-IQ friend who works with Artificial Intelligence and the stuff he can make, and wanted to show people his field of study."

🎶"Wish I could be part of that AI"🎶 pic.twitter.com/C1V8xogBgq

Twitter did not spare this AI genius, but it is interesting that, while Ariel's looks changed, her voice reminds the same.

Please do not interpret my blatant racism as racism

It is Halle's voice, meaning the 22-year-old more than deserved her role of Ariel.

yall are crying because a literal mermaid in a kids movie is black? embarrassing

Of course, some sided with this "new and improved" Ariel, though we are not sure what else is to add than Ariel is a mermaid. She is not based on a real person, animal, or anything in between, so let's drop it.

Instead, the main question remains: why did her hair look dry in the trailer?