June 26, 2013, was a tragic day when the nation awoke to the sight of a star NFL player being escorted out of his house by police. Aaron Hernandez, New England's star player, was charged with the murder of Odin Lloyd. The body of the victim was found six days earlier near Hernandez's home.

The two had known each other since their college days. They were fast friends, and maybe even more if the rumors were to be believed. Odin Lloyd certainly always looked up to Aaron Hernandez and idolized him. Everything was terrific until things turned sour.

Sadly, this relationship ended in the death of one and the tragic suicide of the other after he was convicted of the crime.

Who Was Aaron Hernandez? 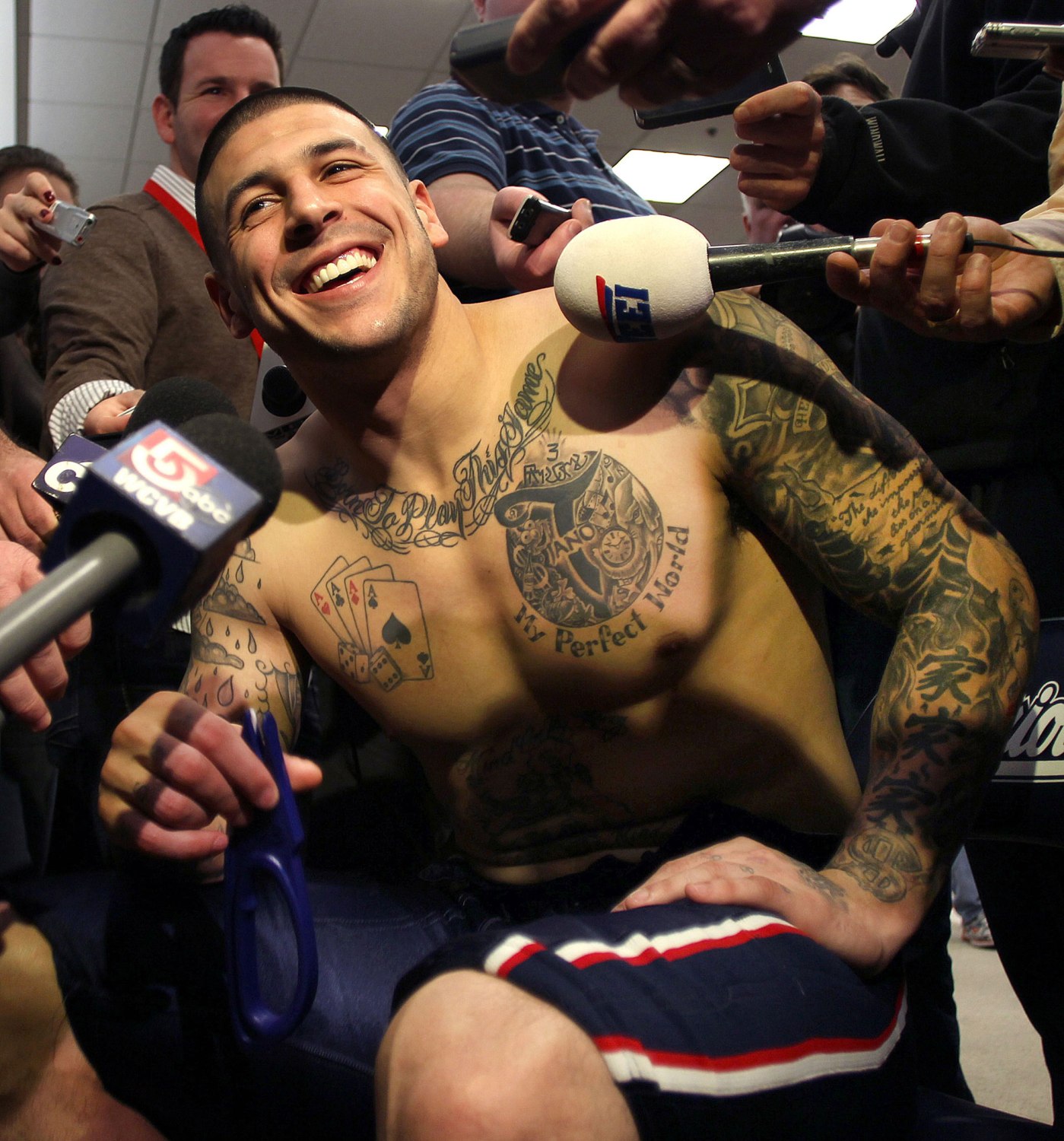 Aaron Josef Hernandez was an NFL star born on November 6, 1989, in Bristol, Connecticut. He played basketball for Bristol Central High School and an AAU team coached by the University of Connecticut's coach in his early years.

However, he was marked for success. After he earned first-team All-State honors as he led his team to the 2006 Central Connecticut Conference Southern Division Championship, his senior year of high school was destroyed by the tragedy of his father's untimely death. This led him to pause for half a season, but he was soon back in the saddle.

Aaron Hernandez became a star tight end at the University of Florida. Due to his height and musculature, he was a sturdy blocker. However, he also possessed the soft hands and breakaway speed of a wide receiver. In 2008, he was an honorable mention All-American for the team that won the National Championship. In the following year, he was named a Consensus All-American.

His 111 catches across three collegiate seasons were a school record for tight ends. Even though he had obvious talent, NFL teams were wary of drafting Aaron Hernandez due to his admitted flunking of a drug test. This had caused him to fall to the fourth round in the 2010 NFL draft before the New England Patriots selected him as the 113th overall pick.

Aaron Hernandez was the youngest player in the NFL when the 2010 season began. Still, he immediately proved he could thrive at the game's top level. Right away, he set a team rookie record for tight ends with 45 catches. This led to him being rewarded with a five-year contract extension in August 2012. He was supposed to take an even more significant role in 2013.

Who Was Odin Lloyd? 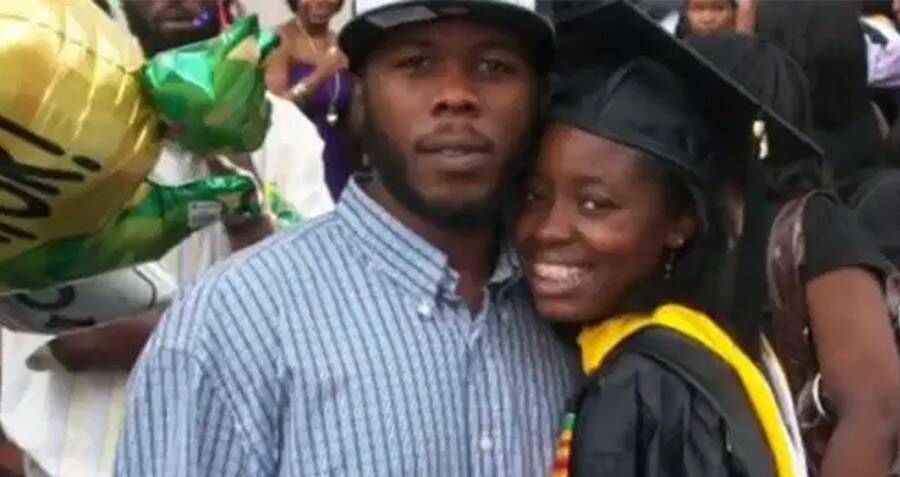 Odin Lloyd's full name was Odin Leonardo, John Lloyd. He was born on November 14, 1985. The city of his birth was Saint Croix in the US Virgin Islands. At the time of his death, he was only 27.

Odin was born to John Lloyd and Ursula Lloyd and had two sisters. Their names are Olivia Thibou and Shaquila Thibou.

Odin Lloyd grew up with his mother Ursula and his two sisters in Antigua, with his father gone. As a child, he had a good demeanor, was very athletic, and loved trying new things.

In his school years, he went on to attend John O'Bryant School. During this time, he discovered his love for football. He used to play football for his high school team and was soon after drafted by the Boston Bandits.

He was a semi-professional footballer who had big dreams. With a high affinity for the game, he wanted to further his career and go on to be a professional. However, that never came to be.

How Did The Two Meet? 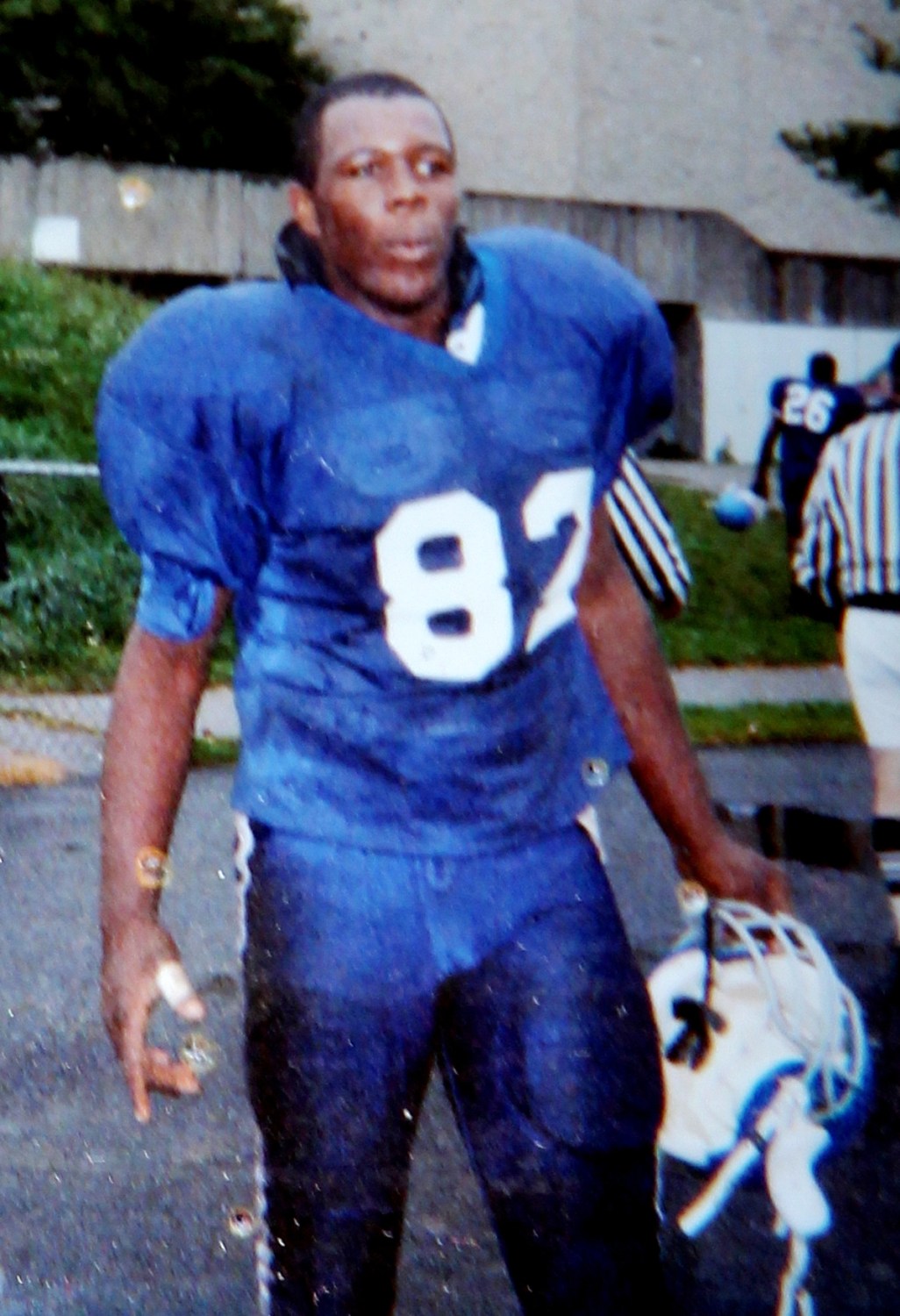 Aaron Hernandez and Odin Lloyd first met ten months before the murder in a Gillette Stadium skybox. This was at Lloyd's girlfriend's birthday party. Lloyd was a guest to the NFL world he always dreamed of being a part of.

Aaron Hernandez had reserved the skybox for the birthday of Shaneah Jenkins, who was Lloyd's girlfriend and the sister of Hernandez's fiancee. Lloyd and Aaron Hernandez became friends by attending Jenkins family gatherings and hanging out in Hernandez's basement, transformed into his man-cave.

The two took off from there, and their friendship evolved. Lloyd had started playing linebacker for the team in 2007, sometimes wearing jerseys with other players' names on the back, when he couldn't afford the $75 team dues. He rode his bike to practice.

When he first met Aaron Hernandez, he didn't mention that he played football. He didn't want to seem like he was a groupie or that he was trying to use him in any way. Aaron Hernandez began visiting Lloyd in Dorchester as their friendship evolved and let him borrow his rented Chevy Suburban.

Everything was going well up to a certain point. 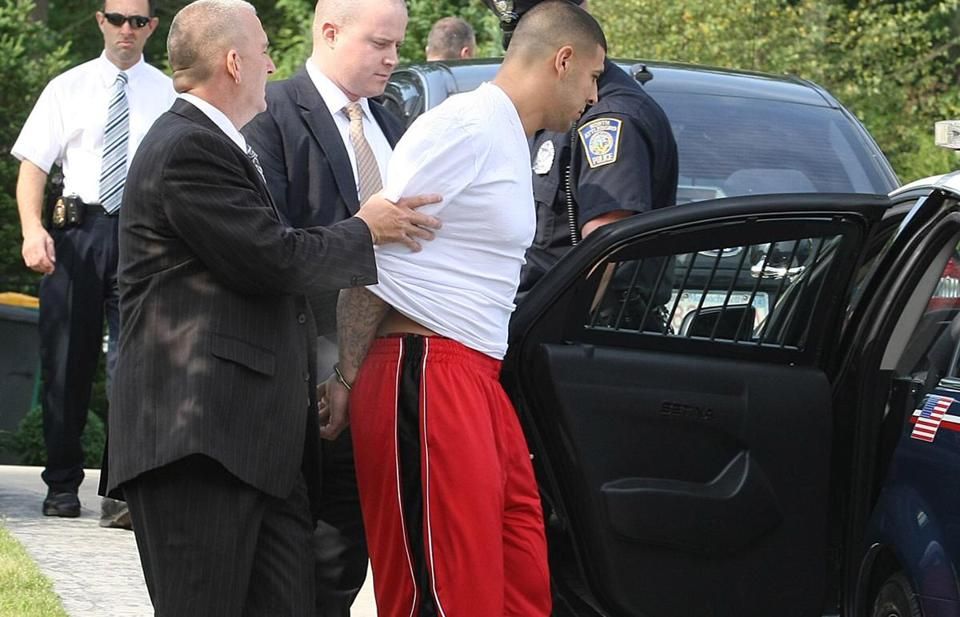 At the time of his death, Odin Lloyd was dating Shaneah Jenkins, who is the sister of Aaron Hernandez's fiancée, Shayanna Jenkins.

The prosecution revealed that Aaron Hernandez killed Lloyd because he was angry that he had talked to some men Hernandez did not like at a nightclub. However, could this have been reason enough for such a drastic step?

Prosecutors believed Lloyd had said something to Hernandez that destroyed his trust, giving Hernandez a motive to kill. The exact words were not known, but it was later found that Aaron Hernandez had been suffering from a degenerative brain disease. This disease had likely led to his actions being rash and uncontrolled.

Odin Lloyd was shot and killed in an industrial park one mile away from Aaron Hernandez's home on June 17, 2013. At the time of his death, Lloyd was 27-years-old.

Hernandez was arrested in connection to the crime on June 26, 2013. Two other men, Carlos Ortiz, 28, and Ernest Wallace, 42, have been charged with murder and are said to have been with Hernandez at the time of the killing. However, they have pled not guilty.

The evidence against Aaron Hernandez was strong. Security video at his home showed him holding what appeared to be a gun 10 minutes after Lloyd's death. A marijuana joint found close to Lloyd's body had the DNA of both men on it. Hernandez's lawyers also admitted he had been present at the murder scene but said he had nothing to do with the murder.

After an extensive trial in 2015, Aaron Hernandez was convicted of first-degree murder and sentenced to life in prison without the possibility of parole. The other two men were tried too. Ernest Wallace was acquitted of first-degree murder but convicted of being an accessory after the fact of the crime on May 12, 2016. Carlos Ortiz also changed his plea to guilty of accessory after the fact and was sentenced to serve four and a half to seven years in prison on June 27, 2016.

What Happened To Aaron Hernandez? 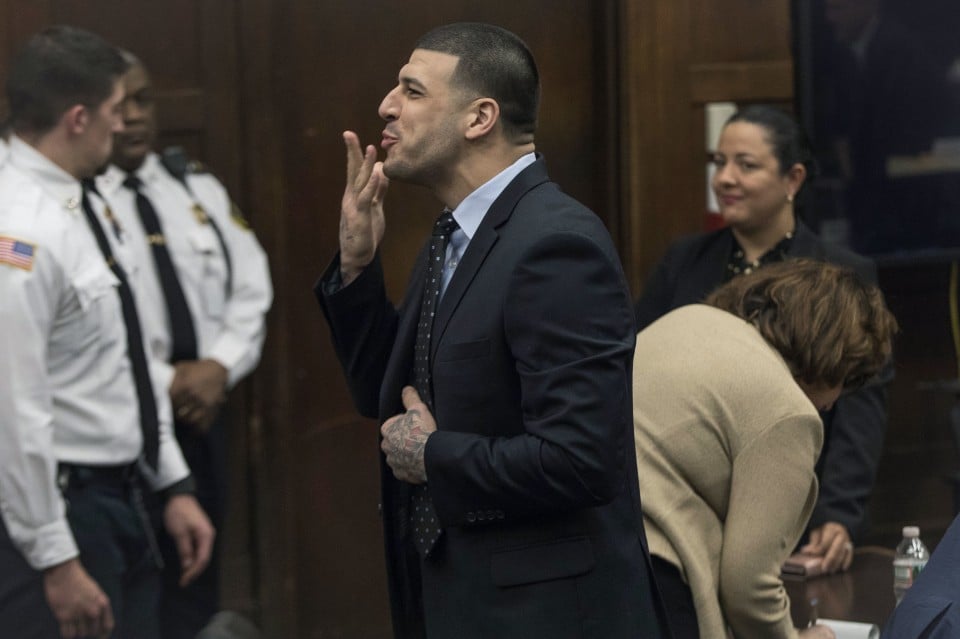 After Aaron Hernandez was sentenced to life in prison without parole, he had experienced a spectacular fall from grace. At one point, he was a player who had a $40m contract with the Patriots but was cut by the team within hours of his arrest. He was 25 when he was convicted and sentenced to a life sentence.

Aaron Hernandez was found dead in 2017, at 3 AM, when a correction officer noticed a sheet hanging in front of Hernandez's cell door.

The officer poked at the sheet, and it fell, revealing Aaron Hernandez hanged from a sheet tied to the window bars. Hernandez had blocked the door to his cell by stuffing its tracks with cardboard, making entry difficult. 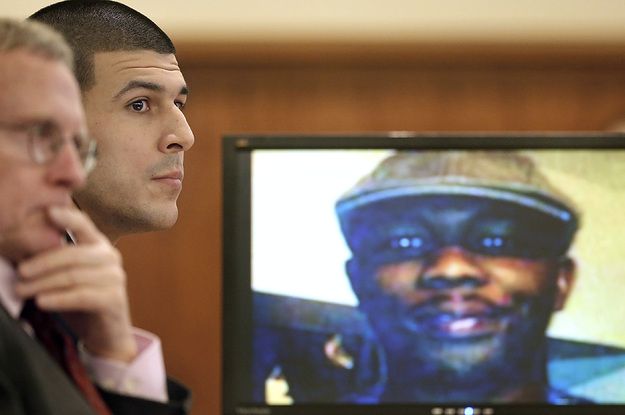 Aaron Hernandez did not have drugs in his system when he was found naked hanging from a bedsheet in his prison cell. It was a gruesome scene, with drawings on the wall and John 3:16 markings written in a substance consistent with blood. John 3:16 is a reference to the Biblical verse:

"For God so loved the world that he gave his one and only Son, that whoever believes in him shall not perish but have eternal life."

Aaron's attorneys have said that he suffered severe chronic traumatic encephalopathy (CTE). This is a degenerative brain disease linked to head trauma and has been diagnosed in multiple NFL players.

Due to this, he was going through chaotic and horrendous existence in many respects, especially since his brain injury wasn't diagnosed. CTE causes aggression, explosive behavior, loss of concentration, mood swings, depression, apathy, and cognitive impairment, and it could have been the cause of his many inexcusable actions.