What would you do if asked to choose between yourself and your baby during a pregnancy complication?

After months of talking to your baby, singing to her, buying cute little matching fits, designing her nursery, and even choosing a name, choosing between giving her up or giving up on your life unexpectedly is a huge decision.

It's not impossible to think, "I could have other kids later. If I die now, who will care for my baby even if she survives? What if she doesn't make it too?" So many ifs and what-ifs. These worries are even more legit when you already have another child growing up. 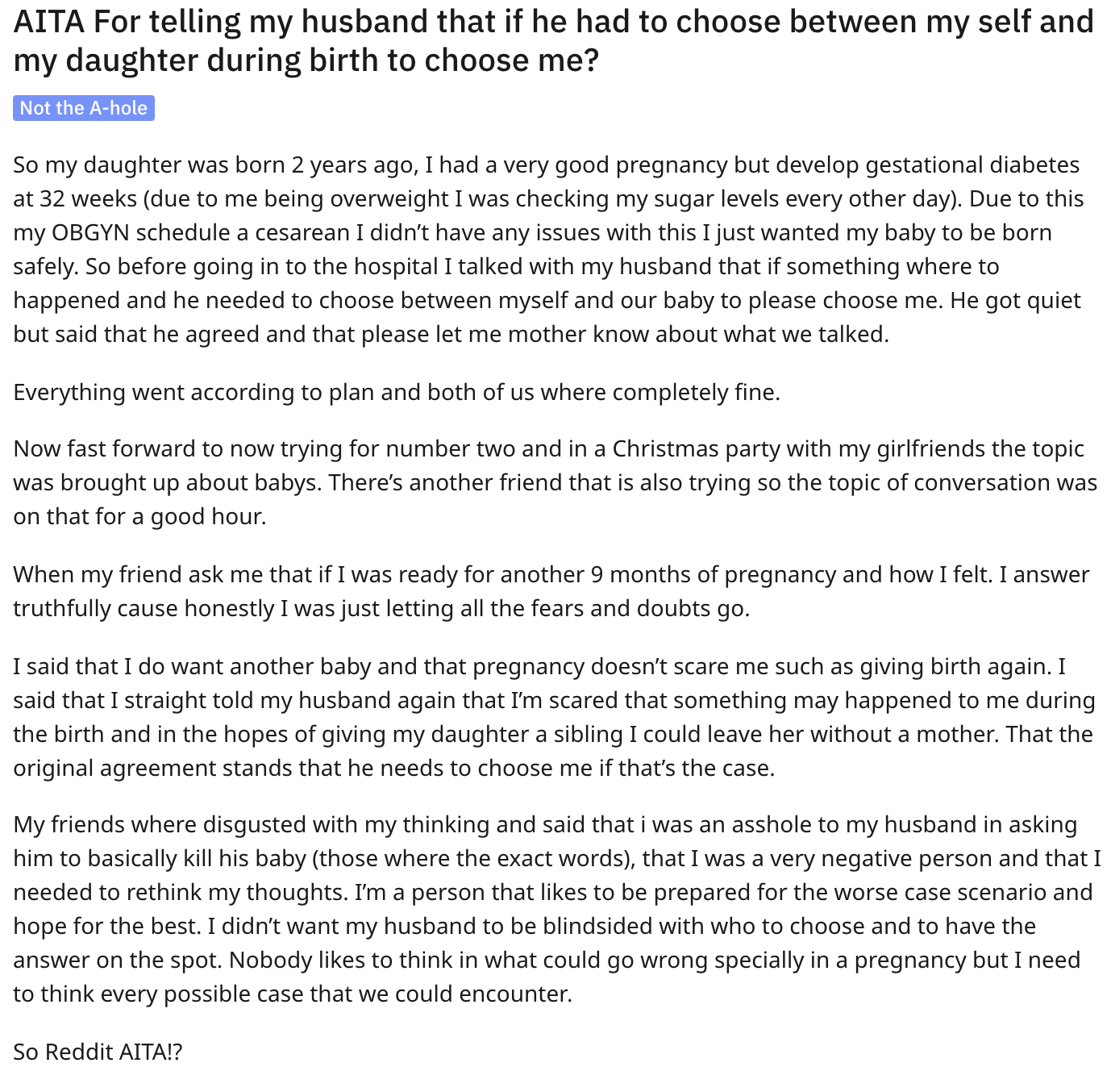 One woman took to Reddit to ask what others thought of her decision to ask her partner to save her life over her child's. She also shared her friends' adverse reactions to her decision.

If you were in her situation, what would you do? If you were a friend, how would you react? Will you be able to understand her decision?

She doesn't seem like a selfish person because she did her best to ensure that her child would be delivered safely despite her health issues.

One might argue that she should have discussed it with her husband so they decide together instead of telling him what she would rather want without prior consultation. 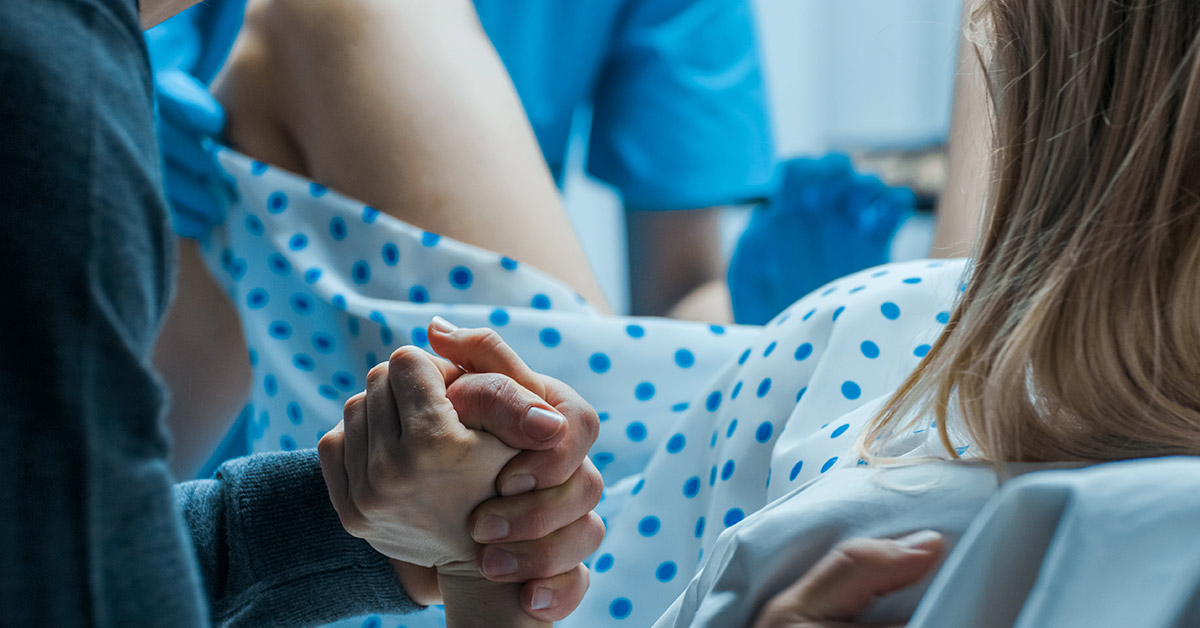 The post went viral and got about 3000 comments. Some agreed with her choice to save her life, while others reacted opposite.

One person wrote: "You can make another baby, there can't be another you. I had a similar conversation with my husband once, and that was exactly what he said to me. I would never want him to be miserable with a baby by himself. I'm not scared of dying or anything, but I do want to live and be by his side now and when we decide to have our children. Of course, we'd be devastated if we lost a baby, but we would go through it together."

Another wrote in support, too: "This. During both my pregnancies, we were in agreement that if the unthinkable would happen, then I was the one with priority. Doubly more so the second time because neither of us could fathom leaving our oldest and a newborn motherless. We figured we could make another baby or adopt one. If I won't be able to carry again, but we can't make another me."

Some people also commented on how her friends were the problem and expressed their displeasure over the concept of modern parenting.

One wrote: "I hate the modern parenting culture where mothers are expected to always martyr themselves, where her health and needs are totally ignored in favor of the baby. It's dehumanizing. There is absolutely nothing wrong with wanting to live."

Another added: "Agreed. It's like the martyr Olympics. I've seen a group of this type of mother almost come to blows over who was most willing to sacrifice her life in horrible ways for the sake of her kids. They were trying to one-up each other over what they'd be willing to suffer. To be honest, it was fascinating in a morbid horrifying way."

"NTA OP. You're a person with value in your own right. My feeling is someone who exists now has priority. Sacrificing yourself while making your husband a widower & your child motherless is not the noble action your "friends" seem to think it is."

One Redditor shared a personal experience that involved the medical staff choosing to save her life over her child's.

She wrote: "I lived through the situation. We didn't get a choice. The doctor just point blank said, "if it comes down to you or the baby, we save you." Luckily, we both made it out ok. I think this is mostly just an old troupe from movies and TV. But I agree OP is NTA."

"The entire thread helped one man see that choosing to save his wife over his child was okay, too, if he ever finds himself in that situation."

He wrote: "This whole thing has been a fascinating read. I remember once years ago this topic came up in a largely female group. And, the opinion was very heavily that 'of course, you'd save the baby'. That always stuck with me."

"I'm at the point of starting a family soon. My wife has various medical issues which may make a pregnancy slightly harder than the norm. Something happening to her is my worst fear in the whole thing. (to the point I argued for not having kids rather than risk it). And, I've always been very, very clear in my mind that if that horrible, horrible decision ever came up. I'd pick her in a heartbeat."

"While the loss of a baby would undoubtedly be heartbreaking. As long as she's around, we could always have another. (even if she lost the ability to have her own there'd still be options as a couple). The other choice would leave me a heartbroken single parent. And I can't imagine it being much of a life for me or the kid."

Thinking about the effect of our decision, in the long run, might change how we view what should be done when choosing between the life of a mother and her unborn baby.

If the mother has a terminal illness and wouldn't live long after birthing her baby, it might be easier to choose her baby over herself. But it's a different story for someone who has a whole life ahead of them.

Also important is discussing with your partner before making such a decision.