Restaurant owner Steve Chu received one unusual request on Thursday, March 11th. One of the restaurant's regular customers had terminal cancer, and her son-in-law asked the owner if he could send them the recipe of their broccoli tempura, her favorite dish there so that he could make it at home for her.

The 30-year-old restaurant owner specializes in Asian fusion cuisine and co-owns two Ekiben locations in Baltimore. On March 11th, when he read the email, he instantly felt there was more he could do, so he responded:

"Thanks for reaching out. We'd like to meet you in Vermont and make it fresh for you."

"I emailed back, saying, 'You do know that this is Vermont we're talking about, right? It's a six-hour drive. '" Brandon Jones recalled."But Steve responded, 'No problem. You tell us the date, time and location and we'll be there.'"

The Old Love Story between Mom and Broccoli Tempura

37-year-old Jones and his wife, Rina Jones, were getting prepared to leave their house in the Canton neighborhood for Vermont that weekend to visit Rina's mom, who has reached the last stages of lung cancer. 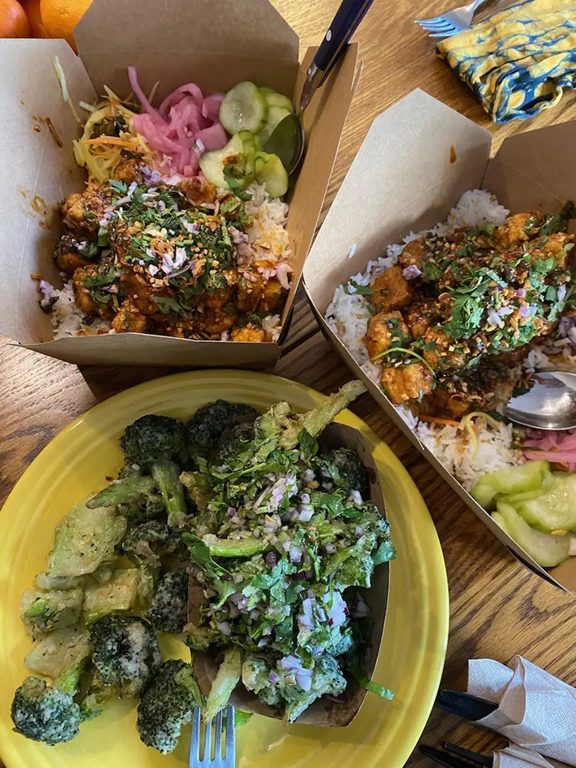 For almost six years, whenever his mother-in-law visited Baltimore, Ekiben in Fells Point was always the first place she went to and ordered her favorite broccoli tempura topped with diced onion, herbs, and fermented cucumber vinegar.

"She loves that broccoli, and I really wanted her to have it one more time," Jones said. "She had always told us, 'When I'm on my deathbed, I want to have that broccoli.'"

Rina Jones recalled: "In fact, when I was packing on Friday to drive up to Vermont, I called my mom to see if she wanted us to bring anything special and she jokingly said, 'tempura broccoli!'"

She said her mom was very happy when she knew Chu was going to make the dish from scratch in Vermont. "It's just so above and beyond, it's an incredible act of kindness," she commented. 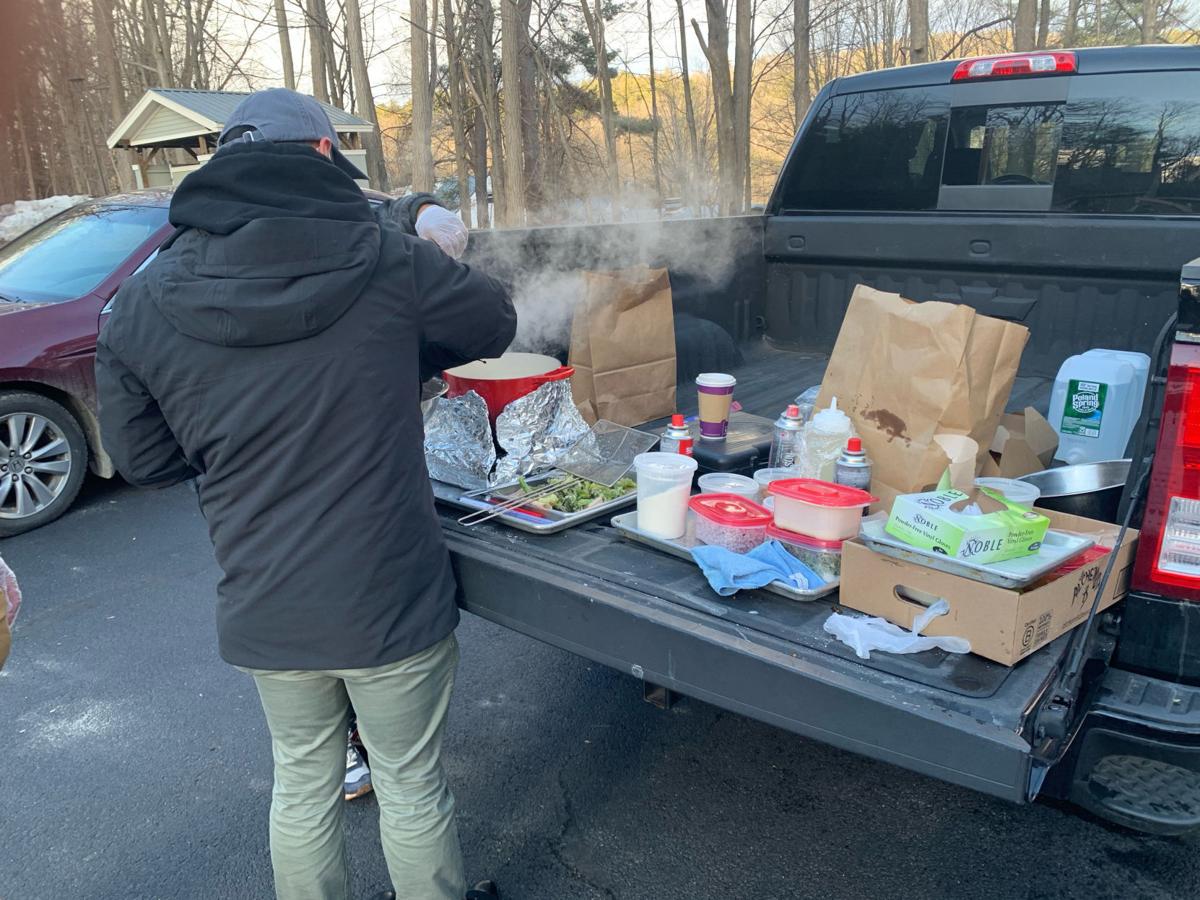 The next day, Chu loaded a pickup truck with a hot plate and a cooler full of all the delicious broccoli tempura ingredients.

Along with his business partner, Ephrem Abebe, and employee Joe Anonuevo, Chu went to Vermont and stayed in an Airbnb rental overnight. The trio then stopped to get some extra ingredients on their way to where the mother lives.

"To me, it was a huge honor to be able to help fulfill the family's wishes," Chu said. "This is about her, not us. There was a lot of good, positive energy in doing this."

When Rina Jones took her mom to Ekiben for the first time, they ordered the broccoli tempura, and her mom was instantly hooked.

"From then on, whenever she'd fly to see us or take the train, that's the first place she wanted to go to eat," Mrs. Jones said. "She's probably been to the restaurant with us at least 20 times."

The Mom Was a Very Special Customer To Chu

Making a 72-year-old customer struggling with terminal cancer happy was the right thing to do in Chu's opinion.

As soon as the team reached the condo building's parking lot, they sent a text to Rina saying they had arrived. Right then and there, they set up their equipment and ingredients in the back of the truck and started cooking.

The kind-hearted trio made not only broccoli tempura but also a mouthwatering tofu dish with peanut sauce and some rice! They then knocked on their customer's door, right after boxing everything up.

"As soon as she opened the door, she recognized the aroma immediately," Mrs. Jones said. "It smelled amazing."

Her mom also seemed to recognize Chu and his team!

"My mom kept saying, 'I don't understand — you drove all the way up here to cook for me?'" Jones said. "She was so happy and touched to have that broccoli. She couldn't believe it."

Right away, Chu recognized the woman he used to cook for in Ekiben. 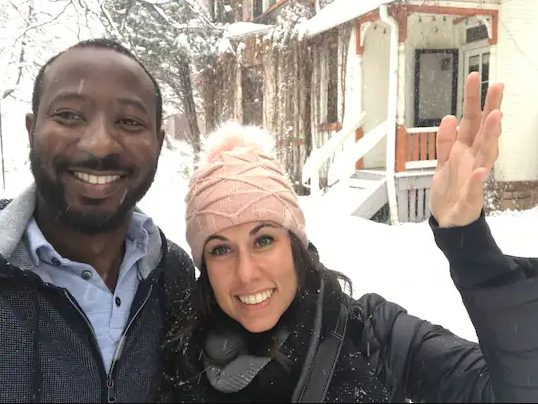 "We see a lot of people in the restaurant, but she always stood out," he said. "She loves the food and always made sure to tell us. She's an amazing, sweet lady."

The Joneses were also kind and invited Chu and his team for dinner, but they needed to head off to Baltimore when they were done. In fact, they did not even accept the family's money, even though they offered to pay.

"My mom cried later about their generosity, and so did I," the daughter said. "They made so much food that she had it again the next day for lunch. It's something we'll never forget — I'll carry that positive memory with me, always."

Chu Was Instantly Repaid for His Act of Kindness!

Unsurprisingly, when Brandon Jones wrote about what happened on a Facebook group, his post got thousands of likes. 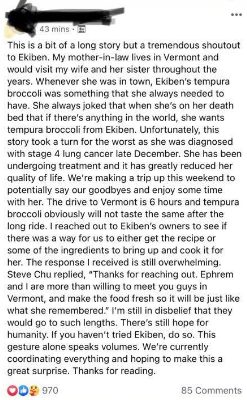 The story was eventually discovered by Zeke Cohen, a member of Baltimore's City Council, who wrote:

"I always point to Ekiben as a business that always models respect for community and treats people with love. Plus their food is amazing! Read this, eat their tofu nuggets, and try not to cry!"

Because one act of kindness can make miracles, many people are now flooding their restaurant with orders! However, Chu said that he's not looking for any kind of reward, implying that it was his duty.

"She's a lovely lady, who has showered us with love at our restaurant for years,"

"It was a powerful experience, and I'm happy that we could make it happen."

Chu Had Started His Business From Scratch

Chu spent most of his childhood in Baltimore hanging around his family's Chinese-American restaurant. He helped manage their restaurant as he grew older.

He and his college friends decided six years ago to get a hot dog cart and start selling dishes of their own at the Fells Point farmers market.

As their famous Thai meatballs and spicy pork buns became more popular in Baltimore, Chu and Abebe opened Ekiben. According to Chu, the name was inspired by the bento boxes that you can buy at Japanese train stations.

Although Ekiben temporarily switched to takeout only due to the pandemic, its loyal, supportive customers helped keep the business afloat.