The discovery of a 39-foot-long monolith submerged in the waters off the coast of Sicily in 2015 has the potential to rewrite history. The monolith, which is located at a depth of around 130 feet, bears a striking resemblance to the enigmatic Stonehenge structure and could potentially shed new light on the past. 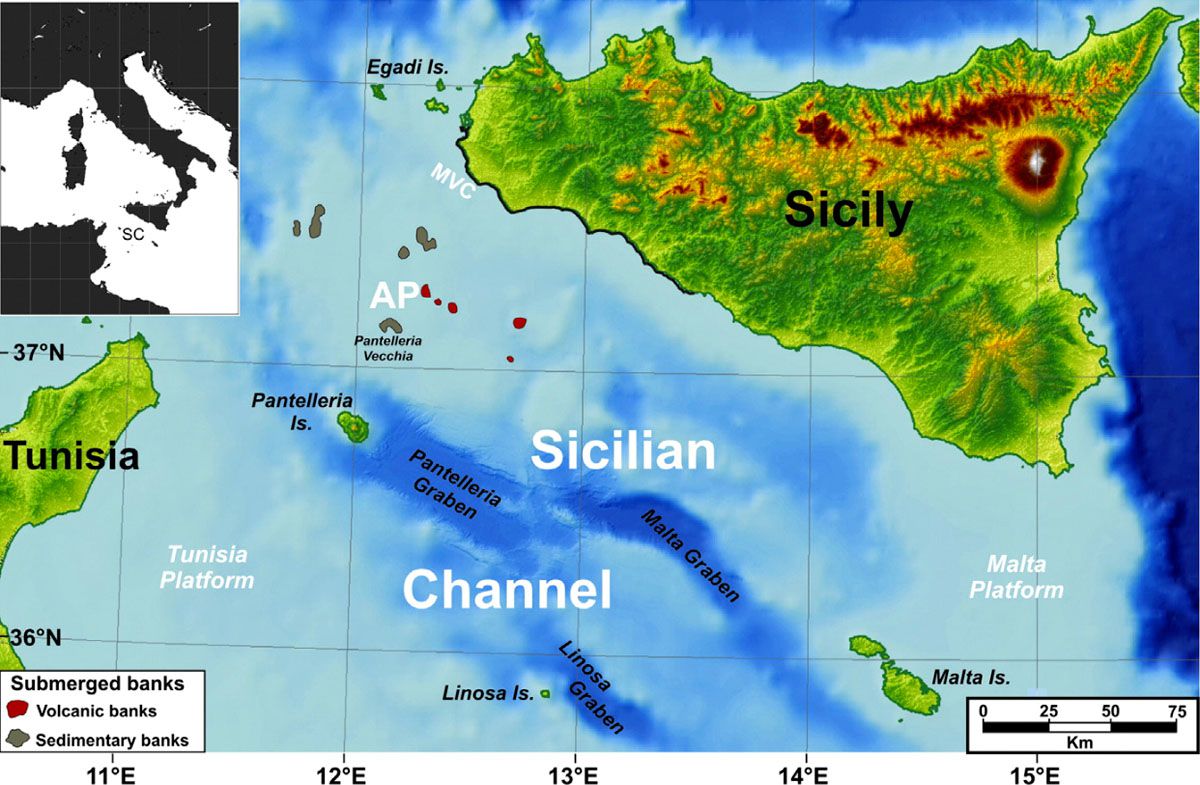 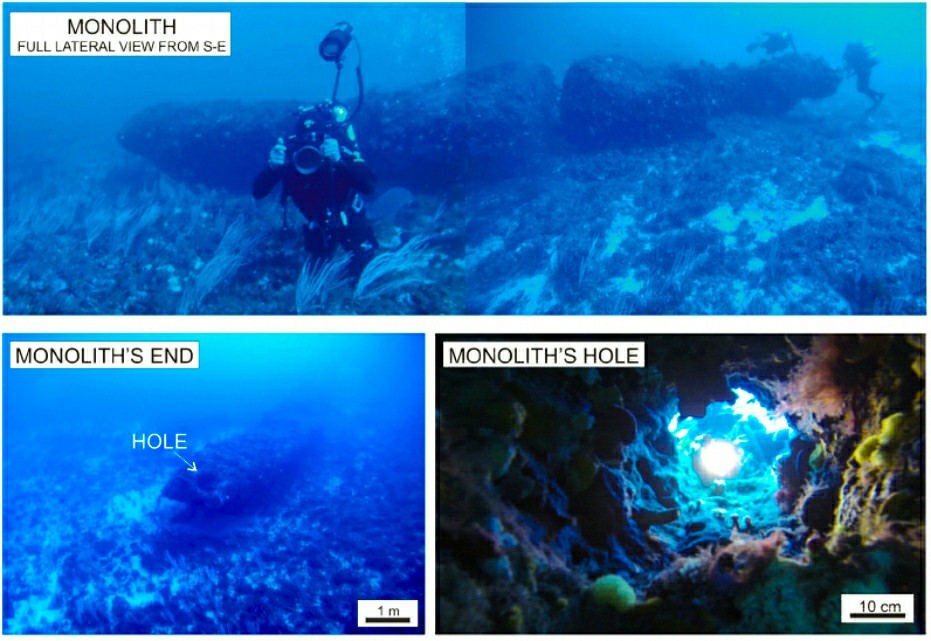 The man-made monolith discovered in the Mediterranean Sea has been dated to be at least 9,350 years old. It is divided into two parts and weighs approximately 15 tons. The monolith features three holes of similar diameter: one that runs through the top of the monolith and two on the sides. 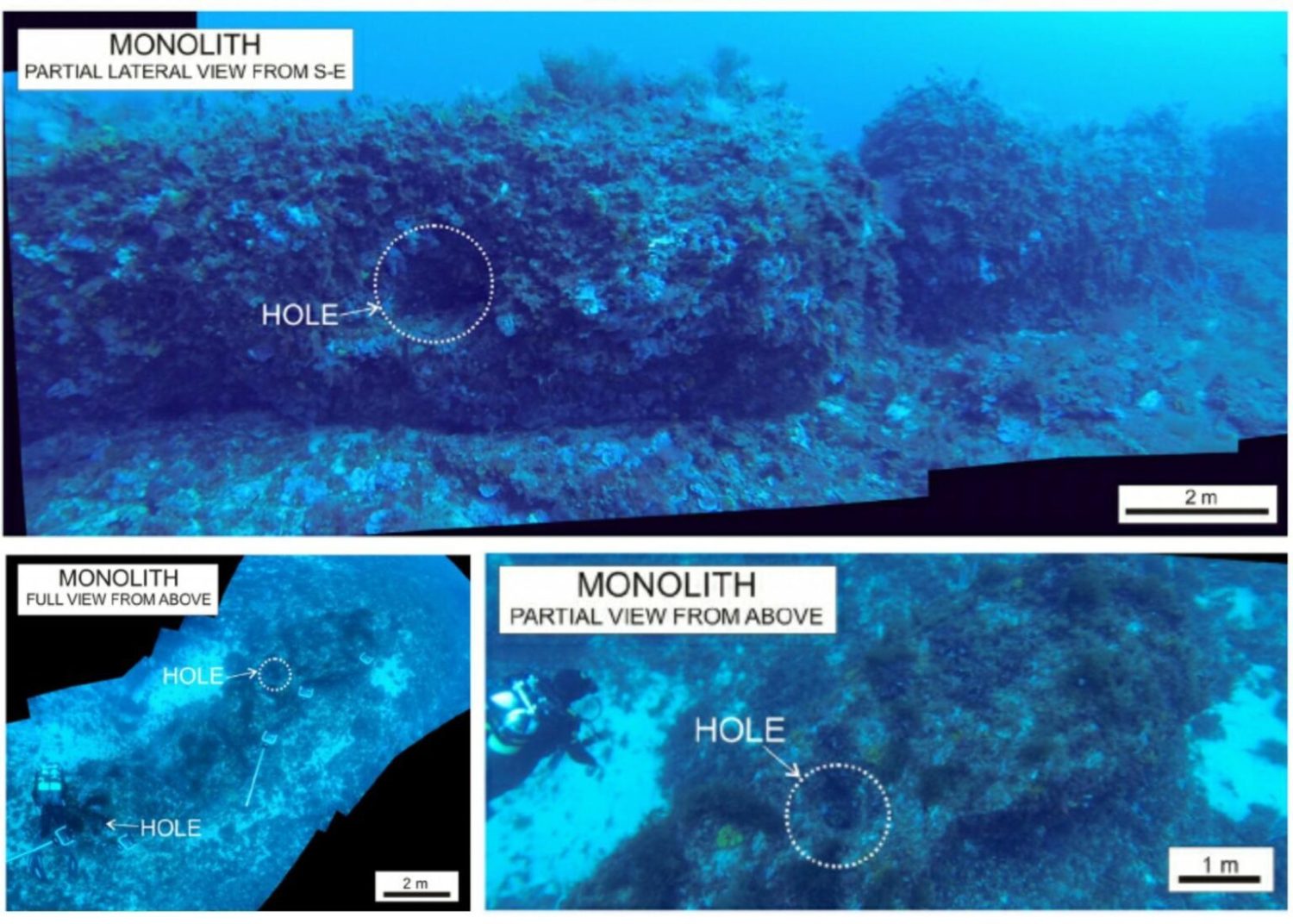 The Stonehenge monument in Wiltshire, England is a well-known Neolithic structure consisting of a ring of standing stones. These stones are approximately 13 feet in height, 7 feet wide, and weigh around 25 tons each. It is believed that the ancient people who built Stonehenge used it to study the heavens, as the monument is aligned with the sunset of the winter solstice and the sunrise of the summer solstice. 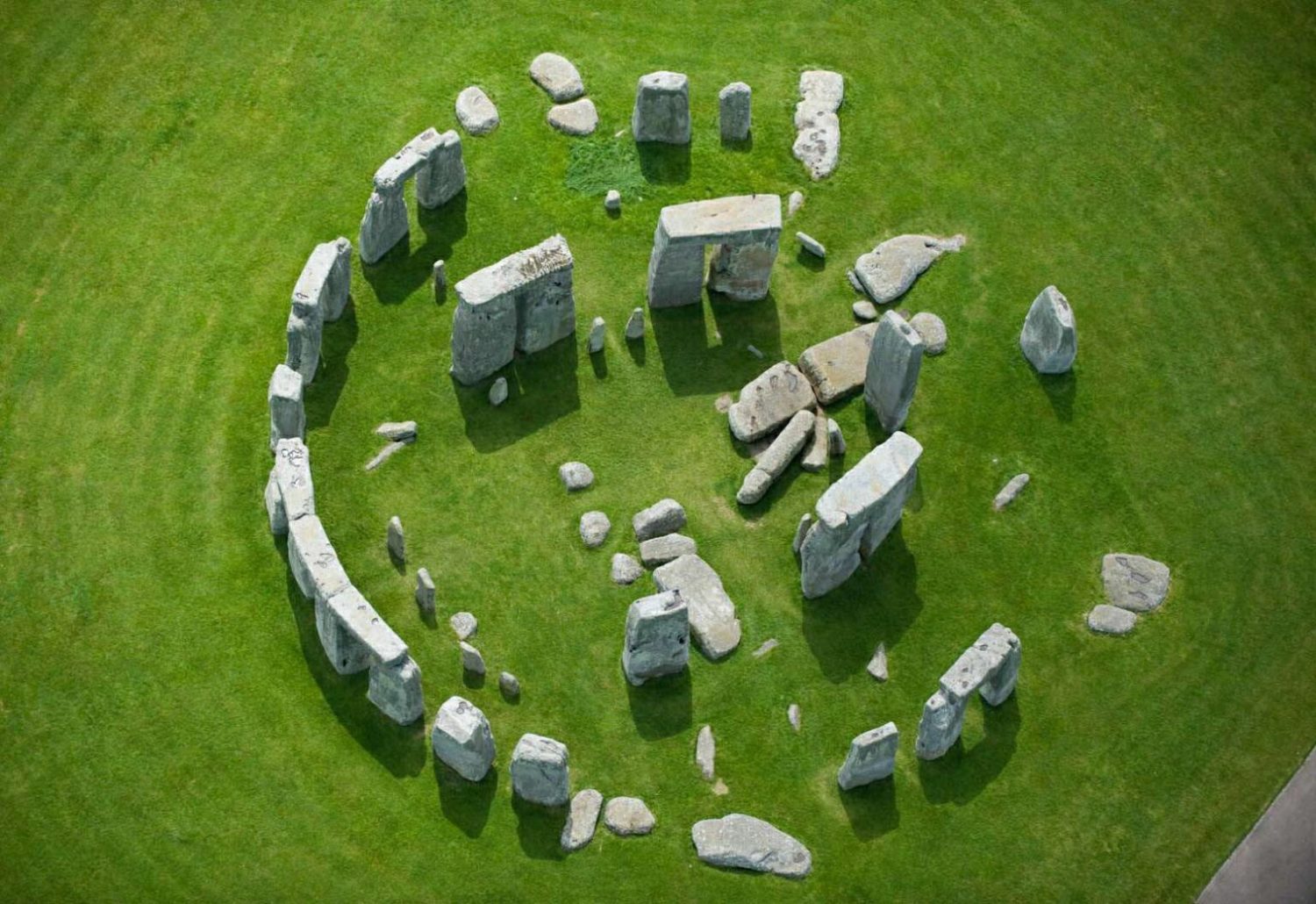 There are many theories about the purpose of the Stonehenge monument. Some believe that it was a gathering place for ancient people, potentially even serving as a religious site where people worshipped their ancestors. Others speculate that it was a place of the dead, or possibly a place of healing, as the bluestones were believed to possess mystical or medicinal properties when struck.

What Did The Archaeologists Who Discover The Sicily-henge Monolith Say About It?

Dr. Emanuele Lodolo from the National Institute of Oceanography and Experimental Geophysics in Italy and Dr. Zvi Ben-Avraham from the University of Haifa and Tel Aviv University in Israel, who discovered the monolith, have stated that there are no known natural processes that could have produced the elements found in the structure.

The scientists who discovered the monolith stated that it is made of a type of stone that is different from the surrounding rock formations, and is located separately from them. They said, "The monolith is made from stone other than those which constitute all the neighboring outcrops, and is quite isolated with respect to them."

According to the scientists who found the monolith, it is made of a type of stone that is not found in the surrounding rock formations and is isolated from them. They stated, "The monolith is made from stone other than those which constitute all the neighboring outcrops, and is quite isolated with respect to them."

The monolith was discovered on the Pantelleria Vecchia Bank, a former island in the Sicilian Channel that was submerged during a flood about 9,300 years ago, according to archaeologists.

"According to Dr. Lodolo and Dr. Ben-Avraham, the obtained age falls within the time frame of the beginning of the Mesolithic period in Southeast Europe and the Middle East."

The submerged site in the Sicilian Channel has the potential to greatly increase our understanding of the earliest civilizations in the Mediterranean basin, as well as the technological advancements and innovations made by the Mesolithic inhabitants in that region.

The construction and placement of the monolith required a highly developed technical ability and advanced engineering, as it necessitated a system for cutting, extracting, transporting, and installing it.

According to the archaeologists, the idea that our ancestors were incapable of utilizing marine resources or making sea voyages due to a lack of knowledge, skill, and technology must be revised.

The archaeologists have concluded that the recent discoveries in submerged archaeology have definitively disproven the notion that hunter-gatherer coastal settlers were technologically primitive.

Who Were The Islanders That Built The Monolith?

The discovery of the Stonehenge-style monolith in Sicily has the potential to provide insights into the earliest civilizations that inhabited the Mediterranean basin. It is unclear whether the Mediterranean monolith was a standalone structure or part of a group, similar to Stonehenge, which was constructed much later around 2,600 BC.

Currently, there is limited knowledge about the people who lived on Pantelleria Vecchia Bank in the Sicilian Channel approximately 10,000 years ago. However, the creation of the stone monument demonstrates that they possessed proficient craftsmanship, as they were able to extract, cut, and transport a large stone.

It is believed that the people living on Pantelleria Vecchia Bank traded fish with other islands. The stone may have served as a primitive lighthouse or beacon, or even as a place to tie up fishing boats. However, the size of the stone raises questions about the feasibility of using it as a docking area for boats. This raises the question of the size of the boats they used. 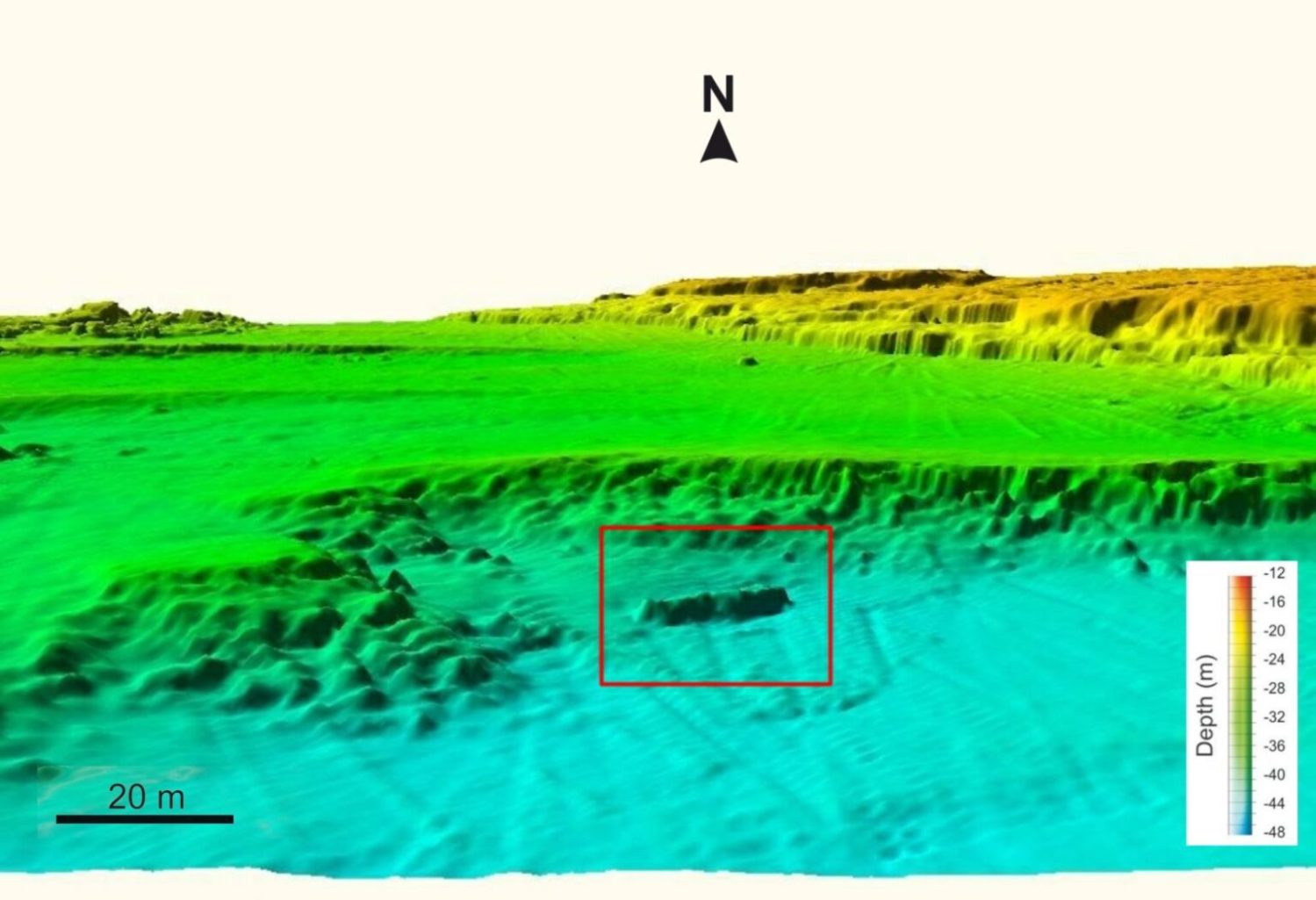 The Sicilian Channel is located on one of the shallow shelves of the central Mediterranean region, where the effects of rising sea levels were particularly dramatic and intense. The geography of the Mediterranean Basin underwent significant changes as a result of the increase in sea levels following the Last Glacial Maximum.

The finding of the monolith indicates that a prehistoric civilization flourished on the island and that ancient people may have established settlements on nearby islands. This discovery supports the existence of significant Mesolithic human activity in the Sicilian Channel region.

The results of radiocarbon dating on shell fragments found in the monolithic stone suggest that the stone is 40,000 years old, while the ocean floor surrounding it is 10 million years old. This suggests that the monolith may have been made from imported stone that was carved into its current form.

Despite much exploration, there is still much to learn about prehistoric human civilizations. Some scientists are now starting to acknowledge that there may be gaps in our understanding of history and that the timeline of events may need to be revised. Further research is needed to better understand this period of human history.

When we look back at the history of the Earth, it is clear that 9,350 years ago was long after the last ice age, particularly in southern Europe. This means that the monolith found off the coast of Sicily could not have been placed there by retreating ice or floods. Its shape and the presence of holes suggest that it was likely quarried and prepared for transportation.