The unexpected and sudden death of John F. Kennedy, the USA's 35th president, was one of the 20th century's defining moments. In modern American history, it is as memorable as the moon landings, the 9/11 attacks, and the end of World War 2. What occurred in a mere 20 seconds on a sunny autumn day in 1963 in Dallas shook the nation. The Kennedy assassination photos have been closely scrutinized ever since.

As the limousine transporting Kennedy, his wife, and the governor of Texas turned the corner onto Elm Street, everyone was in a good mood. While the president happily greeted the crowds, three shots were fired. The first missed, and the second passed through Kennedy's back and injured the governor who was sitting in front. The third bullet fatally struck Kennedy in the back of his head. He was confirmed dead half an hour later. 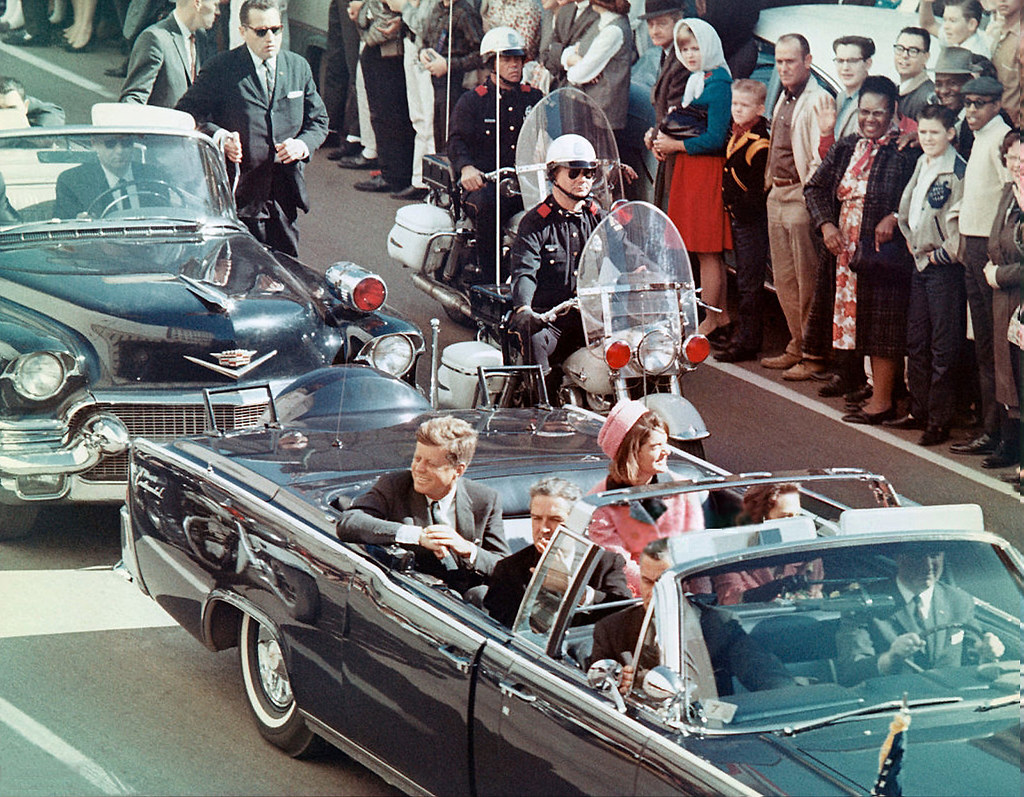 After shooting Kennedy, the assassin, Lee Harvey Oswald, made his escape from the Texas Book Depository, He was questioned by a police officer near his home.

Oswald killed the policeman and sought refuge in a Dallas cinema, where he was finally arrested. Just two days after committing the murders, Oswald was shot and murdered by Jack Ruby while being transported to jail.

This assassination had its fair share of peculiarities. While the official story is well-established and widely believed, many professionals and amateurs have come up with alternative theories in the years since.

Despite the speculations, the shock and chaos surrounding the killing remain unquestioned. The following JFK assassination photos well document the emotions. 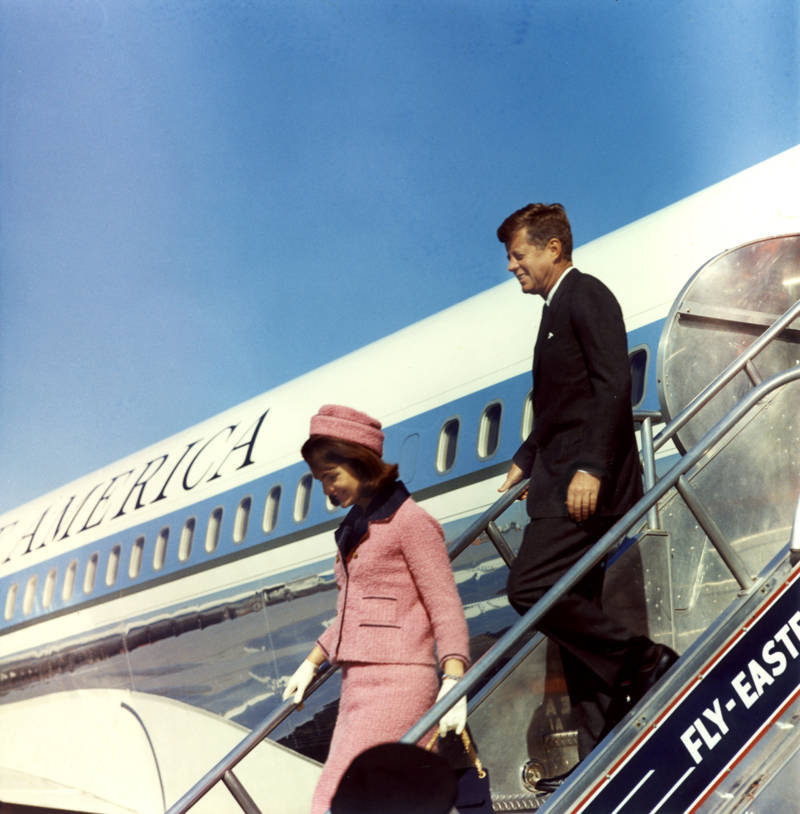 On the morning of the assassination, Kennedy arrived at Love Field airport from Fort Worth with his wife, Jackie. In this image, you can see the pair stepping off the presidential Air Force One plane.

Kennedy came to Dallas to start campaigning for his reelection next year and to ease tensions among the local Democratic party members. He planned to visit five cities in Texas during a 2-day tour.

After visiting San Antonio on November 21st, the Kennedys progressed to Fort Worth and then Dallas.

The Start Of The Journey 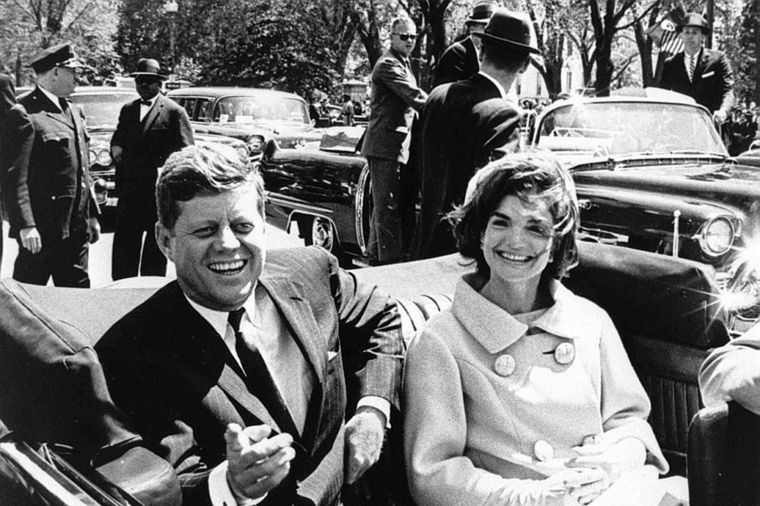 After stepping off Air Force One, John and Jackie immediately boarded the limousine. The governor of Texas, John Connally, and his wife were already in the vehicle.

Kennedy was seated in the back row of the limousine next to his wife, Jackie. Governor Connally and his wife sat in front of them. Crucially, since the rain had stopped, the convertible roof was taken off. This minor detail would prove fatal later on. 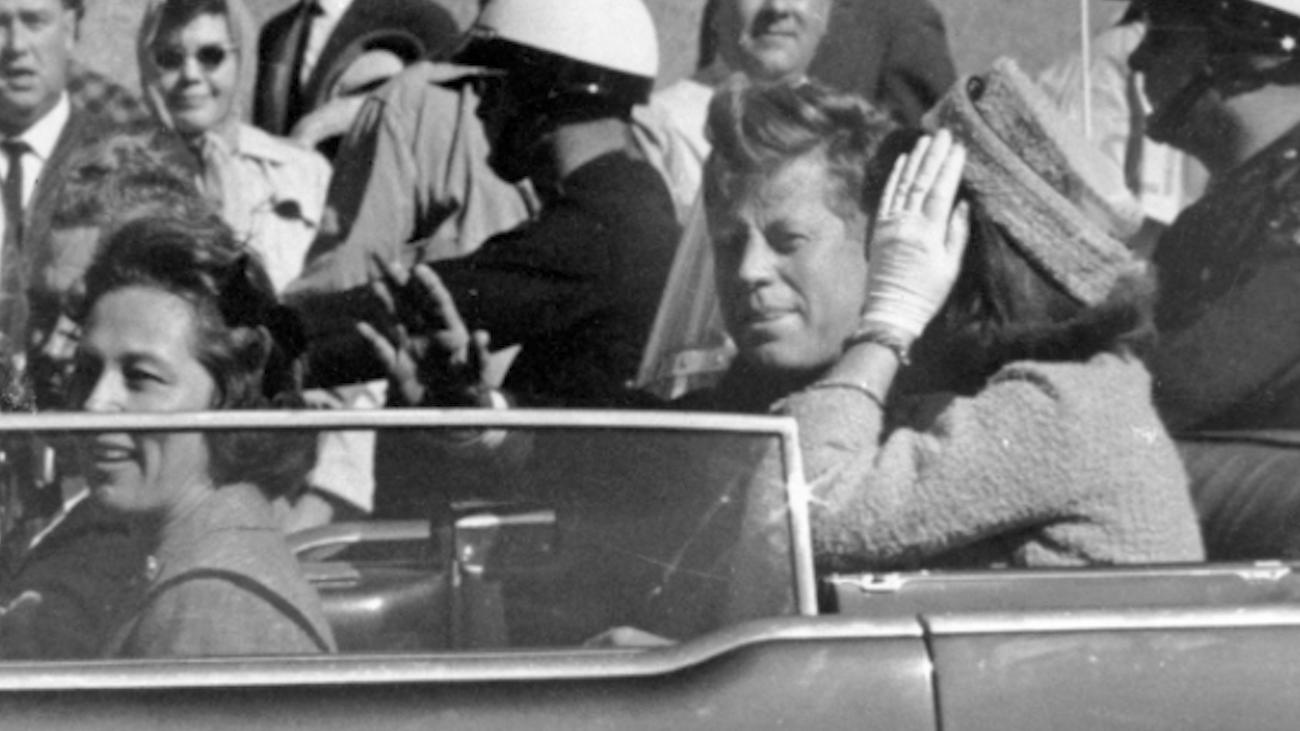 The motorcade was scheduled to leave the airport and embark on a 10-mile tour through Dallas. After, Kennedy was due to deliver another speech.

Another crucial fact is that this route had been published days earlier in local newspapers to encourage people to watch the procession.

Kennedy Assassination Photos: The Calm Before The Storm 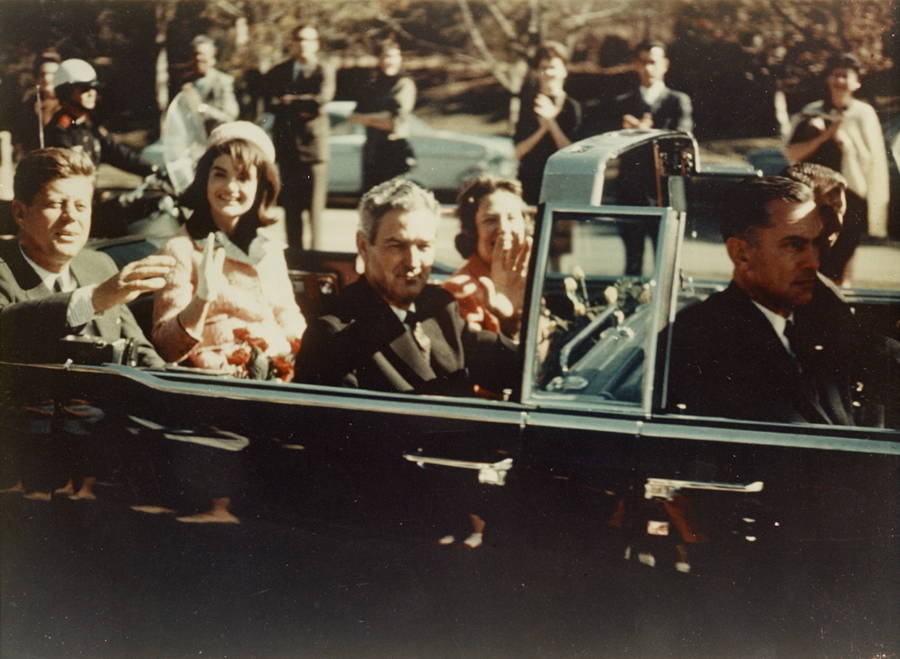 There is a stark contrast between this photo and the horror a few minutes later. The president, the first lady, the governor, and his wife felt the admiration and energy from the crowds on that beautiful day. Vice President Johnson was a few cars back in the motorcade. 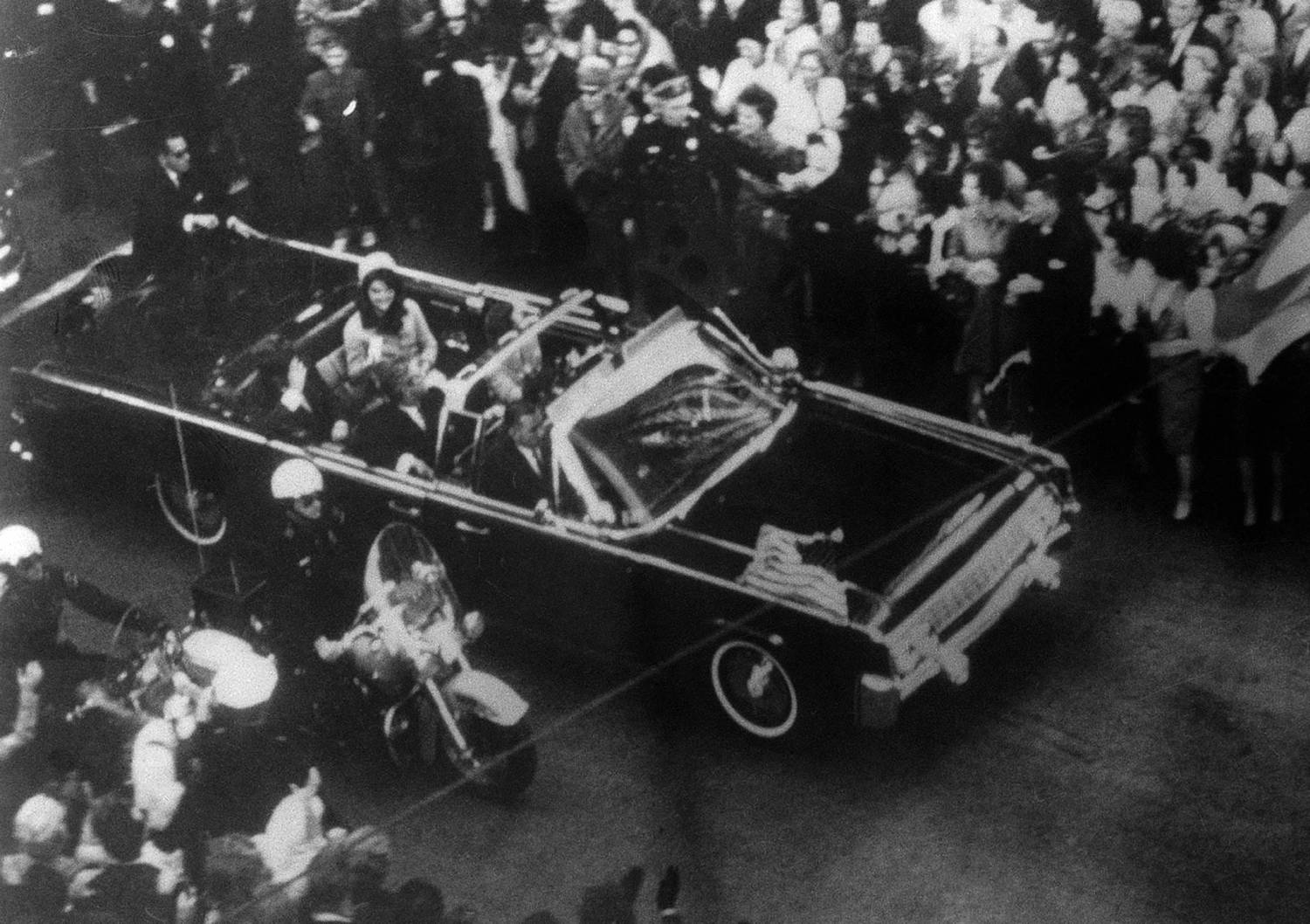 As the vehicles slowly made their way through the city, they were edging ever closer to Dealey Plaza. There, Kennedy's soon-to-be killer was patiently waiting for his moment. 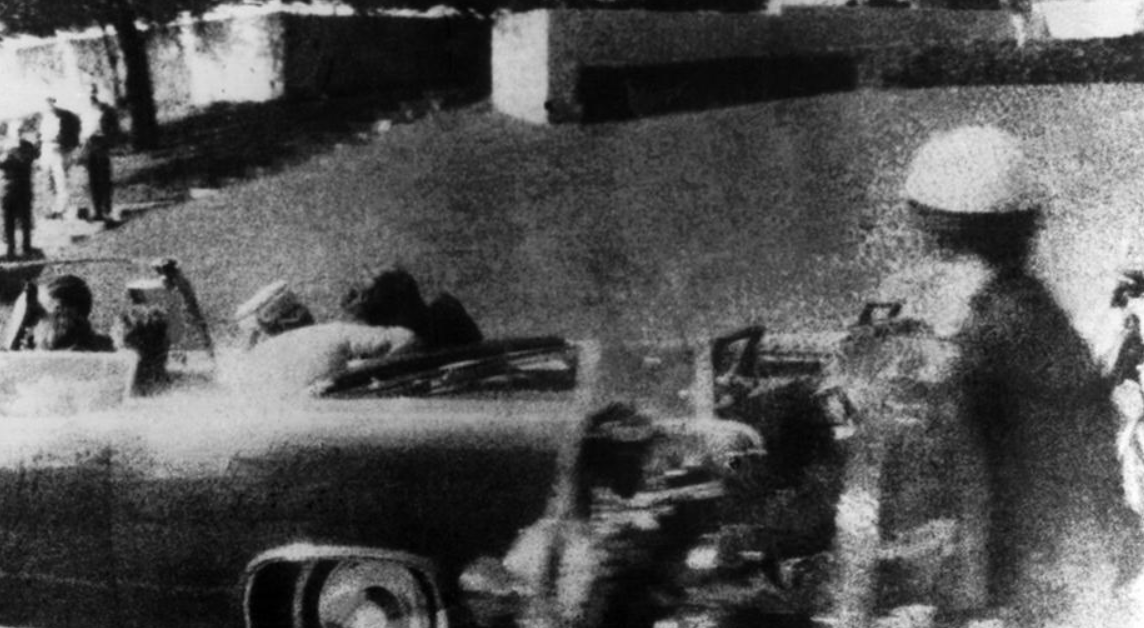 At 12:30 pm, the president's car turned the sharp corner onto Elm Street, and three shots were heard. 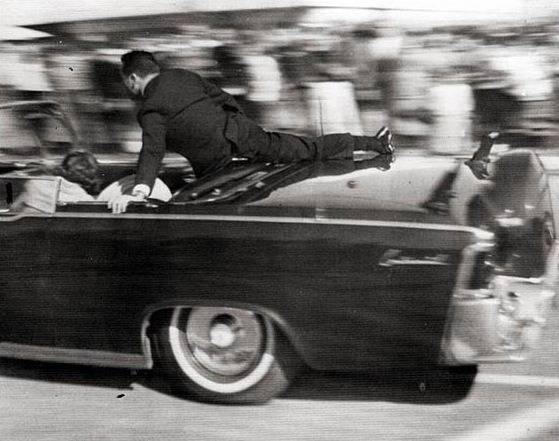 The second of these struck Kennedy in the upper back, traveled through his neck, and proceeded to hit Governor Connally, who was seated in front. 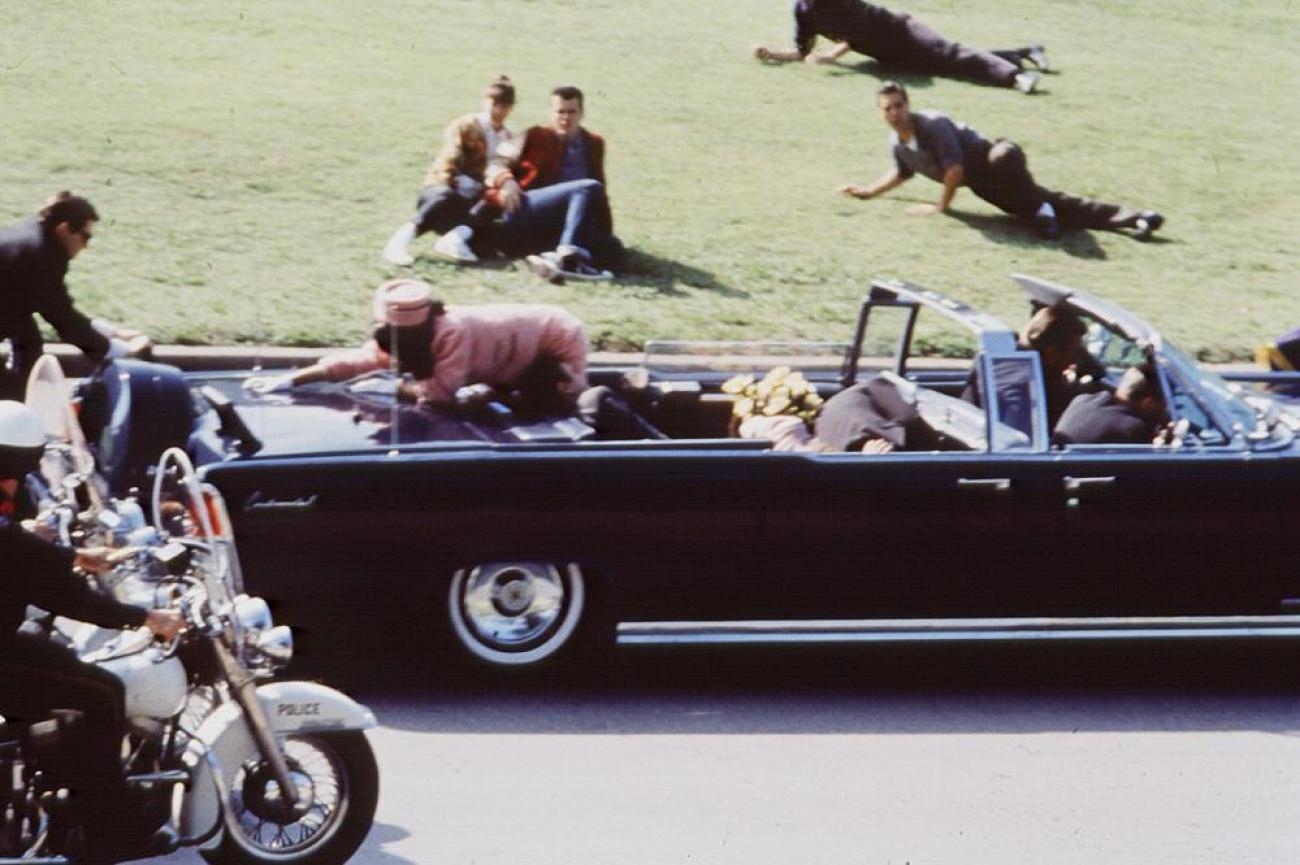 Connally suffered severe injuries as the bullet punctured his lung, shattered one of his ribs, and even broke his wrist bone. Fortunately for him, he survived. 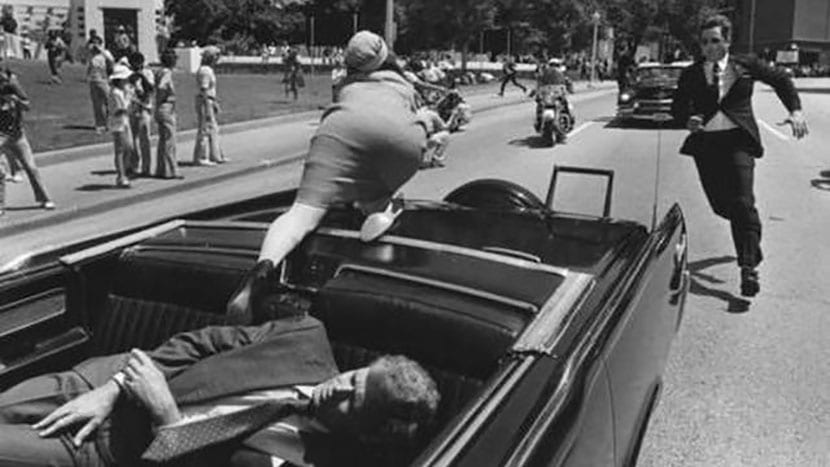 The third shot was the coup de grace that struck the president in the back of the skull. 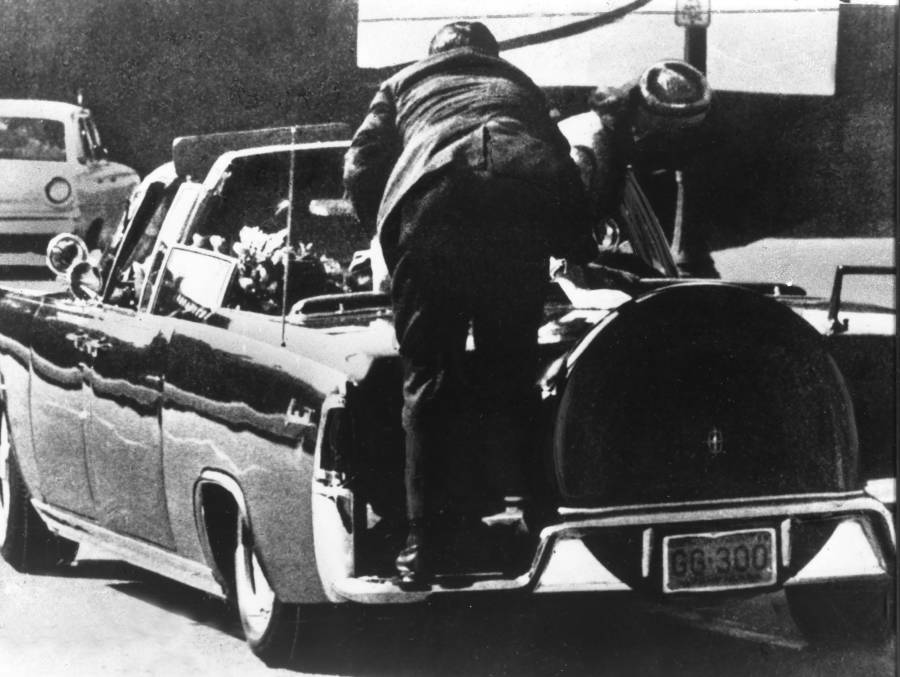 A member of the secret service jumps onto the boot of the limousine to try and shield the four passengers. 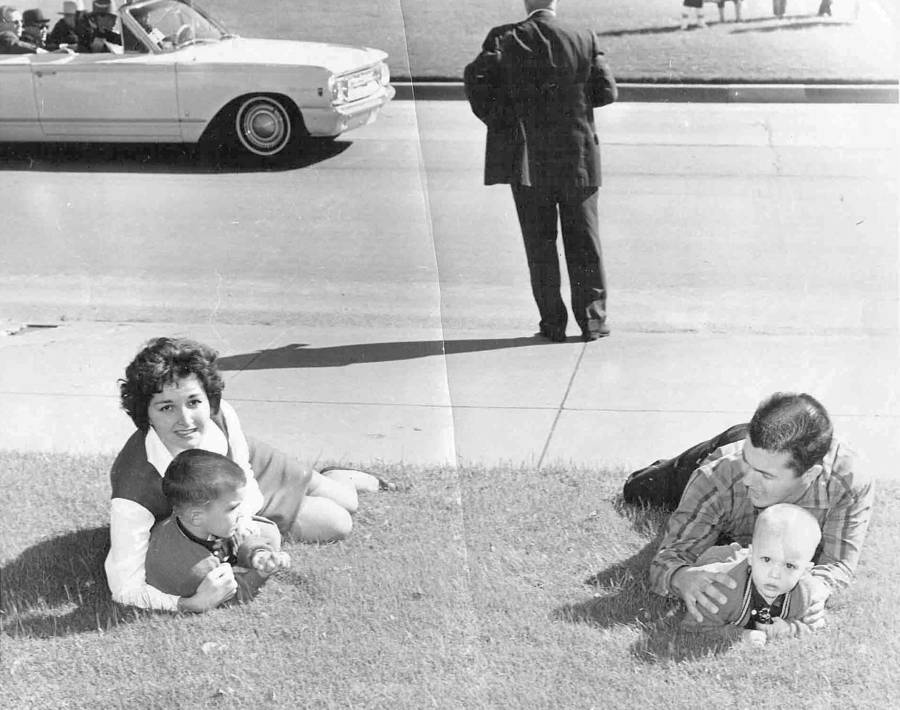 Here, a couple shielding their children on the lawn seconds after Kennedy was shot nearby.

What The Sniper Saw 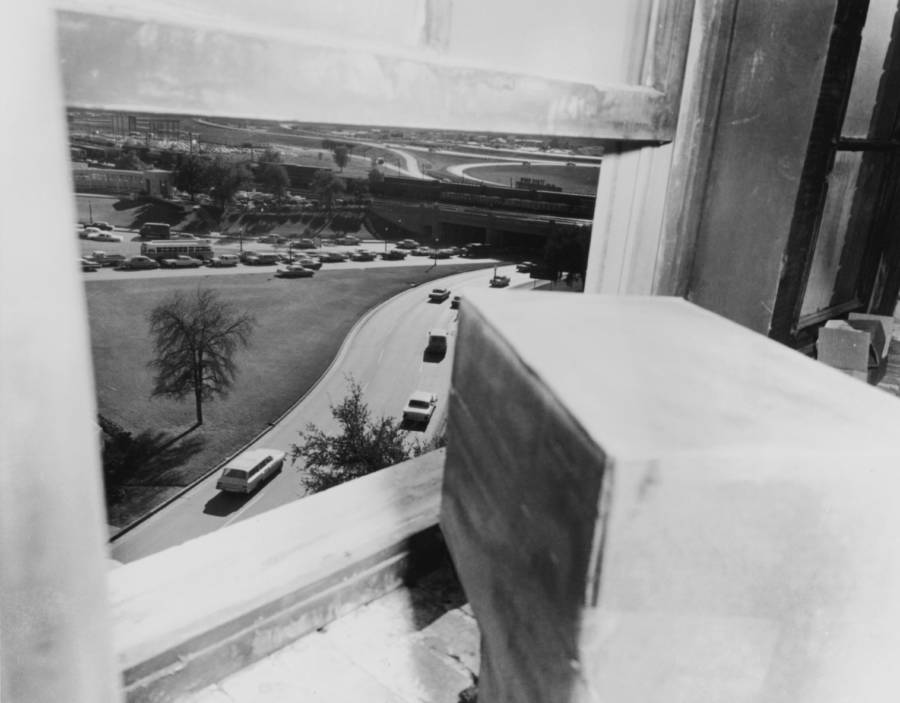 America's first concern was the well-being of the president. The second thought on everybody's mind was naturally: "Where on Earth did those shots come from?"

The answer was the 6th floor of the Texas School Book Depository, on the corner of Elm street. This was Oswald's view as he stared down the scope of his rifle. 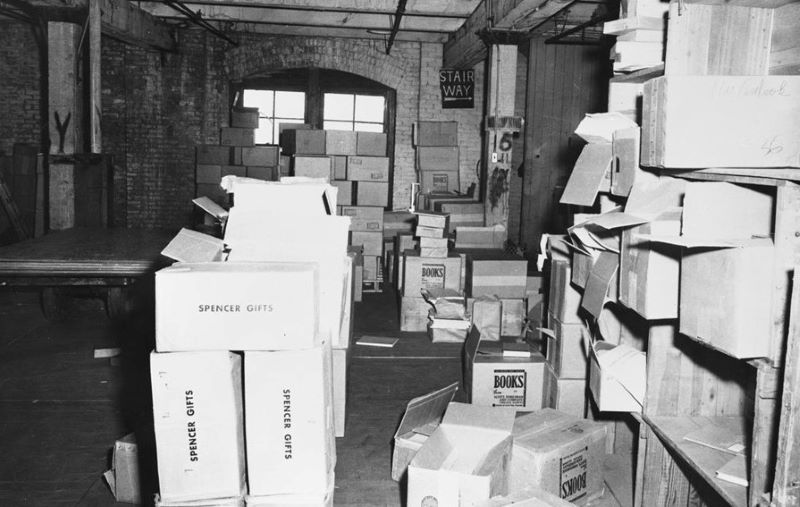 Here is another look at Oswald's vantage point. He had recently been hired at the book depository. As a former US marine, he had a very good shot and managed to purchase a rifle earlier in 1963. 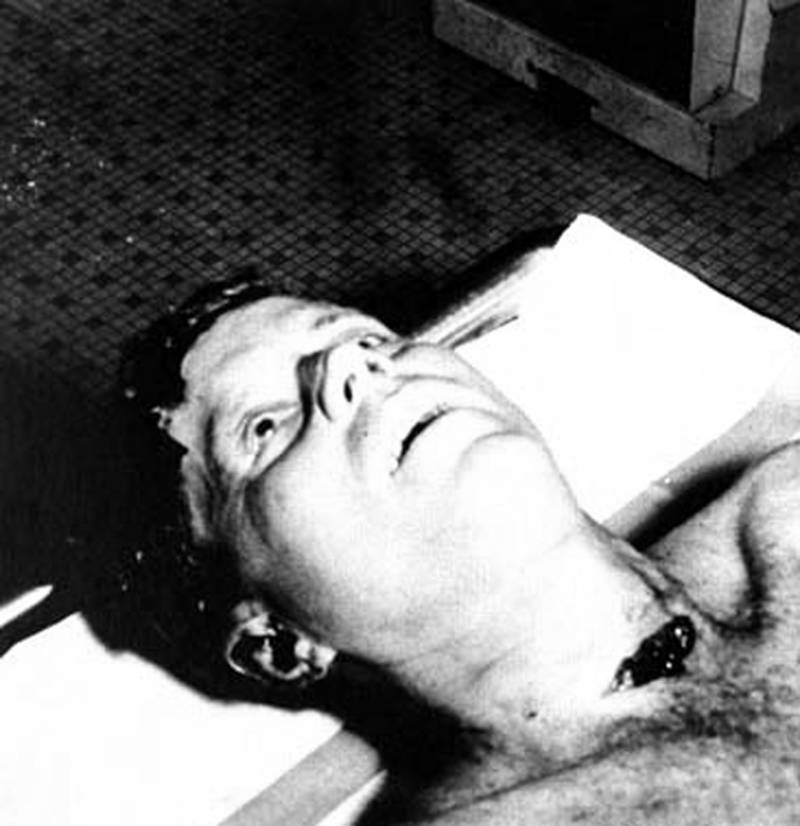 Despite the best efforts of doctors, nobody could save the fatally injured Kennedy. His death was officially announced at 1 pm, half an hour after the shooting.

Kennedy's body after the autopsy is one of the more gruesome JFK assassination photos. 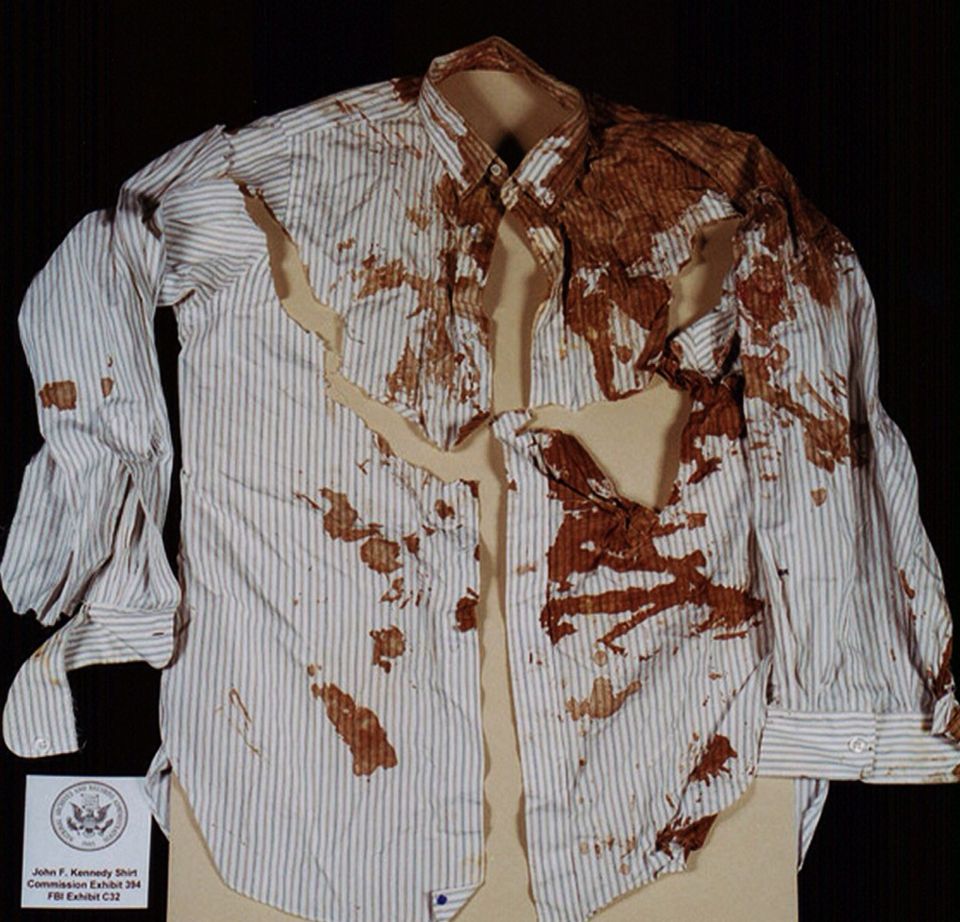 Here is the blood-stained shirt that John Kennedy wore during his final tour. 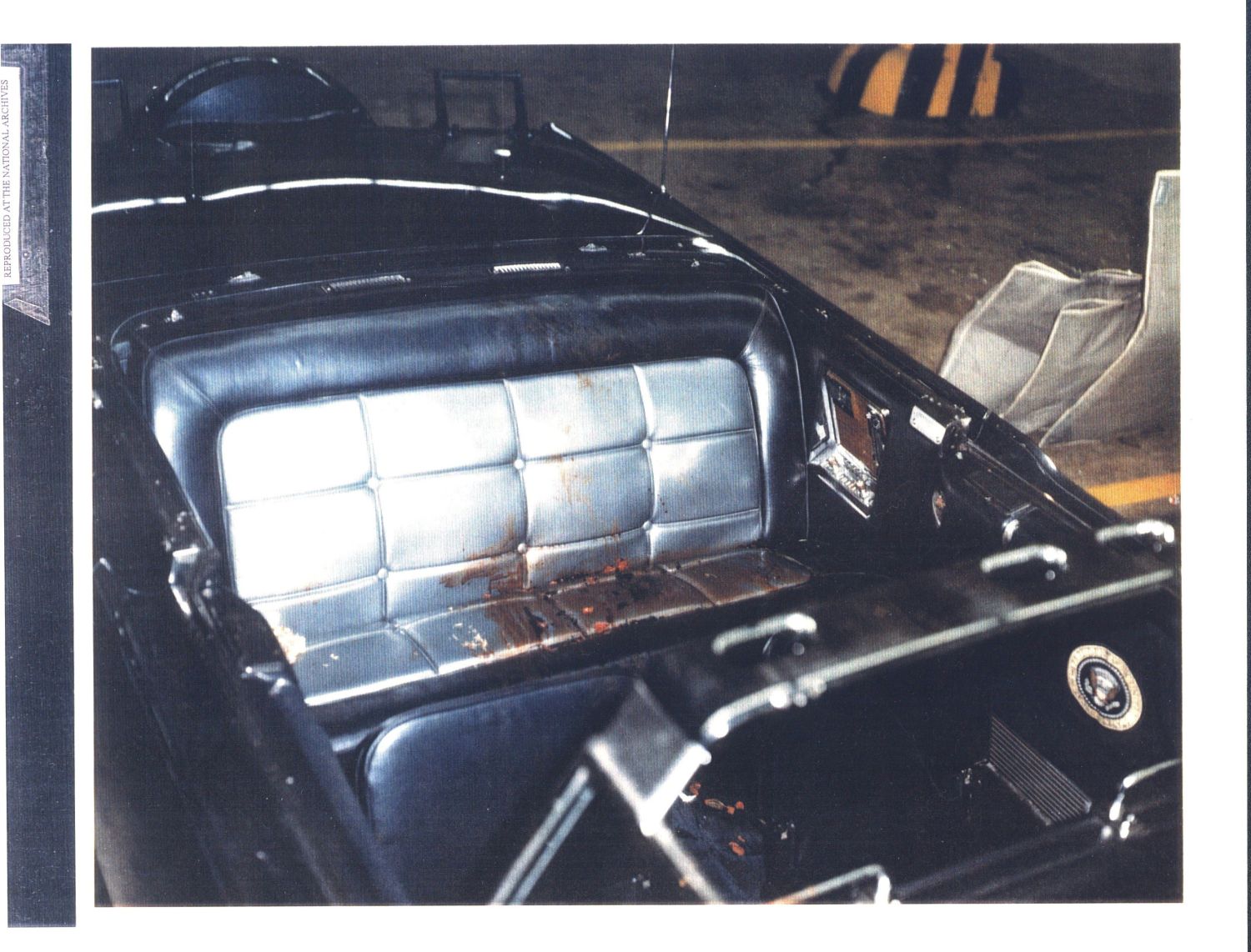 This is a color photo of the backseat of the limousine, still covered in blood. 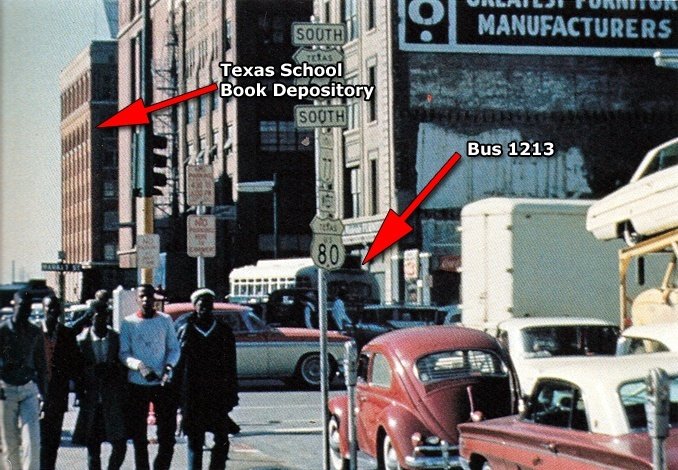 Oswald did not hang around for long. At 12:40 pm, he boarded a bus (visible in the above picture), but the heavy traffic meant it could not move fast enough. 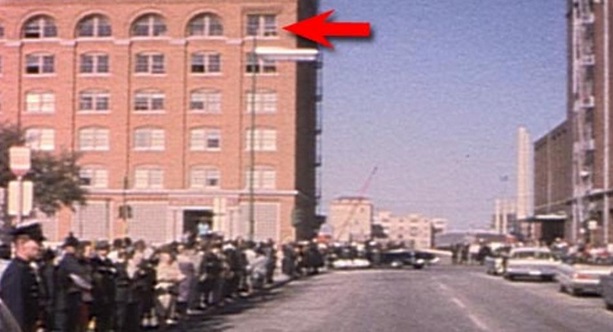 Four minutes after boarding, Oswald got off and started walking. By 12:47 pm, he was riding in a taxi. Descriptions of a suspect were already being broadcasted.

Oswald asked to be driven close to his accommodation, but not precisely there in case, the police had already identified him. After spending four minutes in his room, Oswald changed his outfit and took a small revolver. By this point, his employers knew he was missing.

Not long after leaving his house, Oswald was spotted and approached by police officer JD Tippit, at which point Oswald shot him dead. Now he was wanted for two murders.

The assassin took refuge in a movie theatre, though it was only a short time before police descended upon him in the darkness. 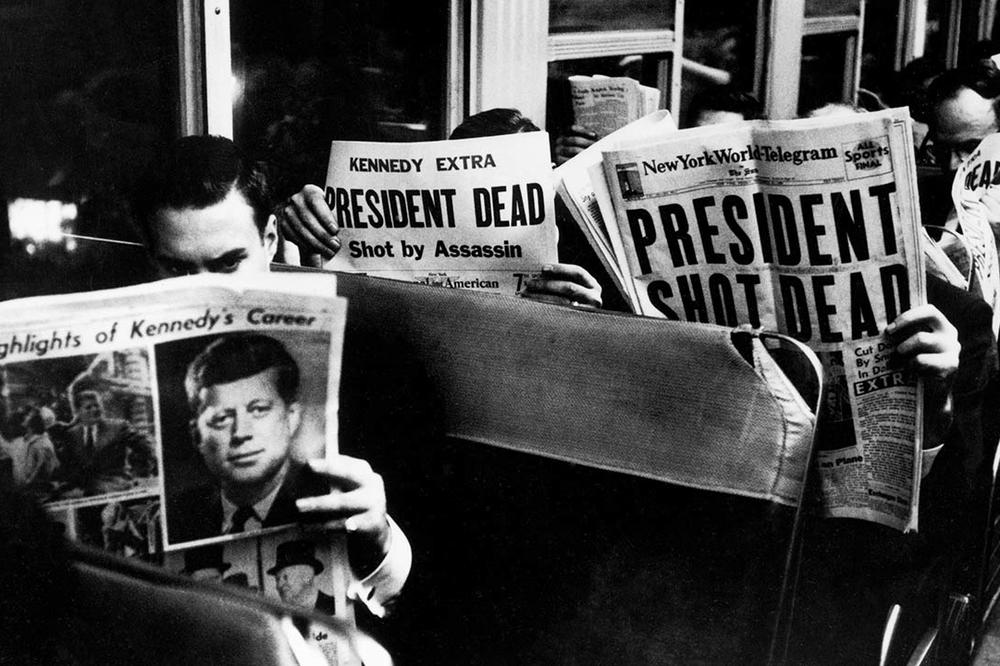 These newspaper headlines in New York need no description. 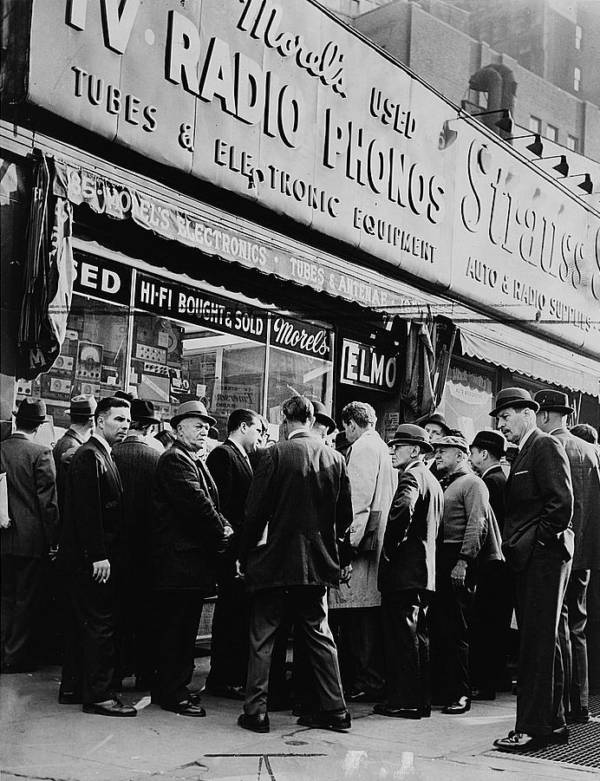 Just as news was spreading around the country, men in New York are seen here gathered around an electronics store, hoping to learn more.

Vice President Johnson Is Sworn In To Replace Kennedy 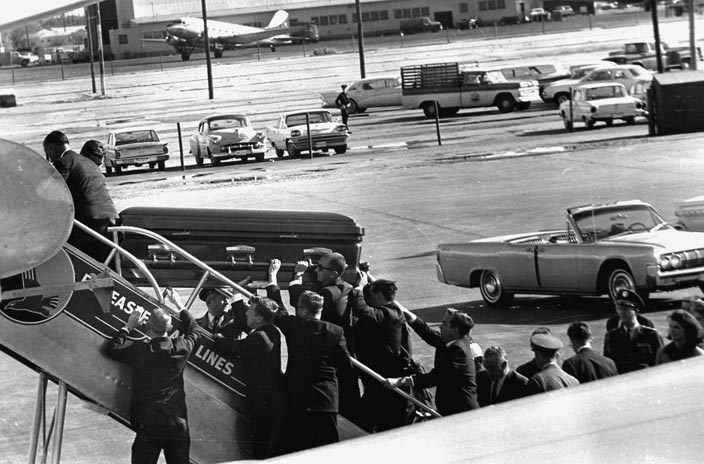 Here the former president's body is carried onto Air Force One.

At 2:38 pm, vice president Lyndon Johnson was sworn in as president on Air Force One. He held office until the election of 1964 when he was convincingly reelected. Johnson remained the American president until January 1969. 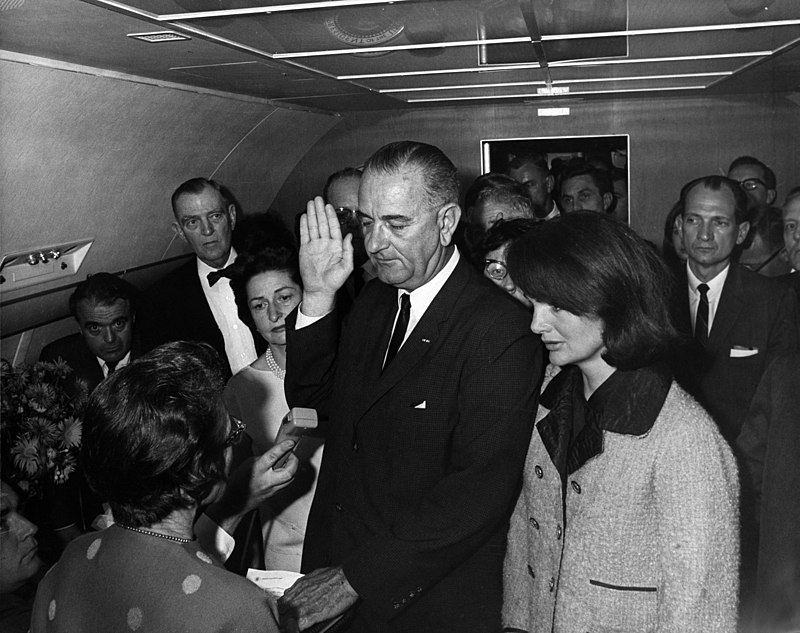 This moment of the presidency changing hands is one of the lesser-known photos of the Kennedy assassination. 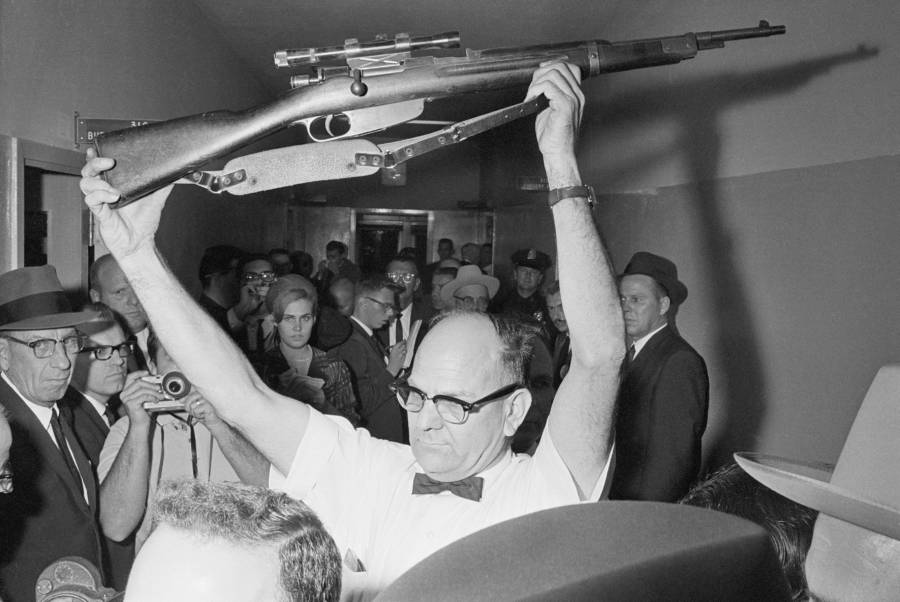 This is the rifle that Oswald used to carry out the assassination. 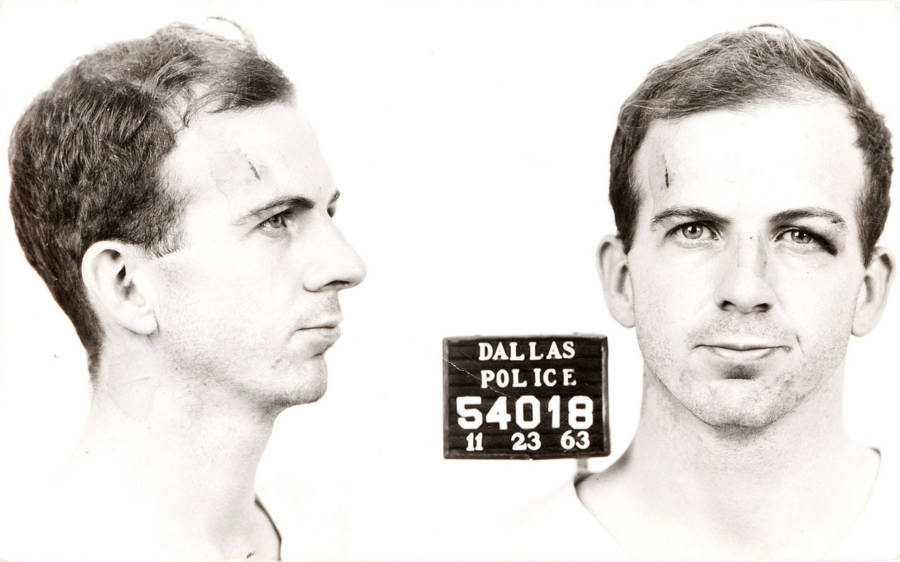 Lee Harvey Oswald was charged with murdering President Kennedy and Officer Tippit on the evening of November 23rd.

On November 24th, authorities planned to move him from the basement of the Dallas police headquarters to county jail. A crowd of reporters and photographers had gathered to witness the moment. Among them was Jack Ruby. 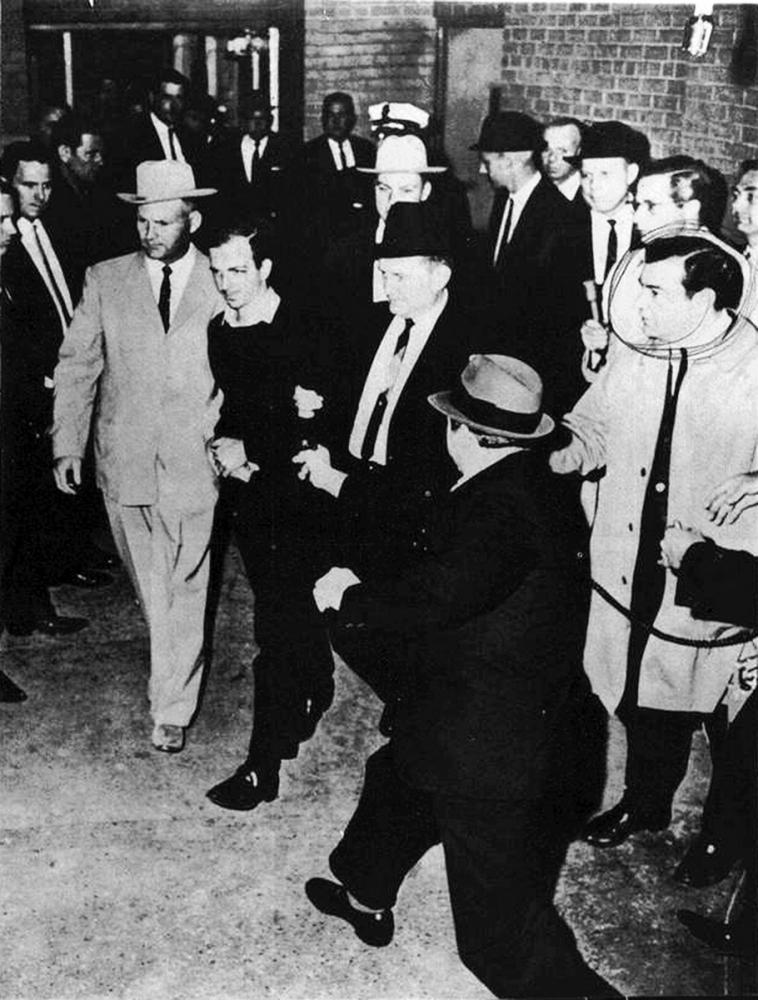 Ruby sprang out from the crowd and shot Oswald in the stomach. Oswald was taken to the same hospital as Kennedy was on the 22nd, but he too died shortly after his ambush. 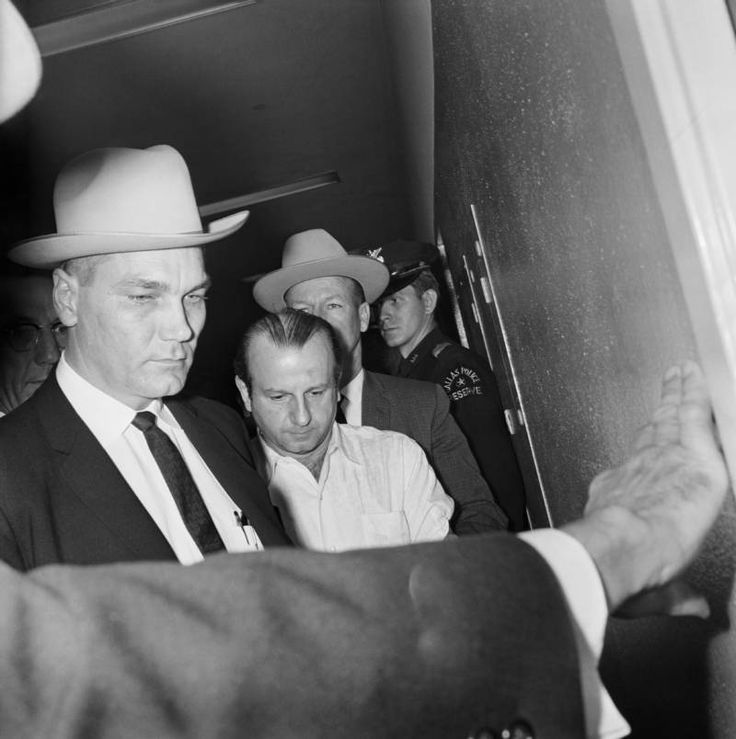 Some considered Ruby's actions heroic, though he was still charged with murder. He eventually died in prison in January 1967. 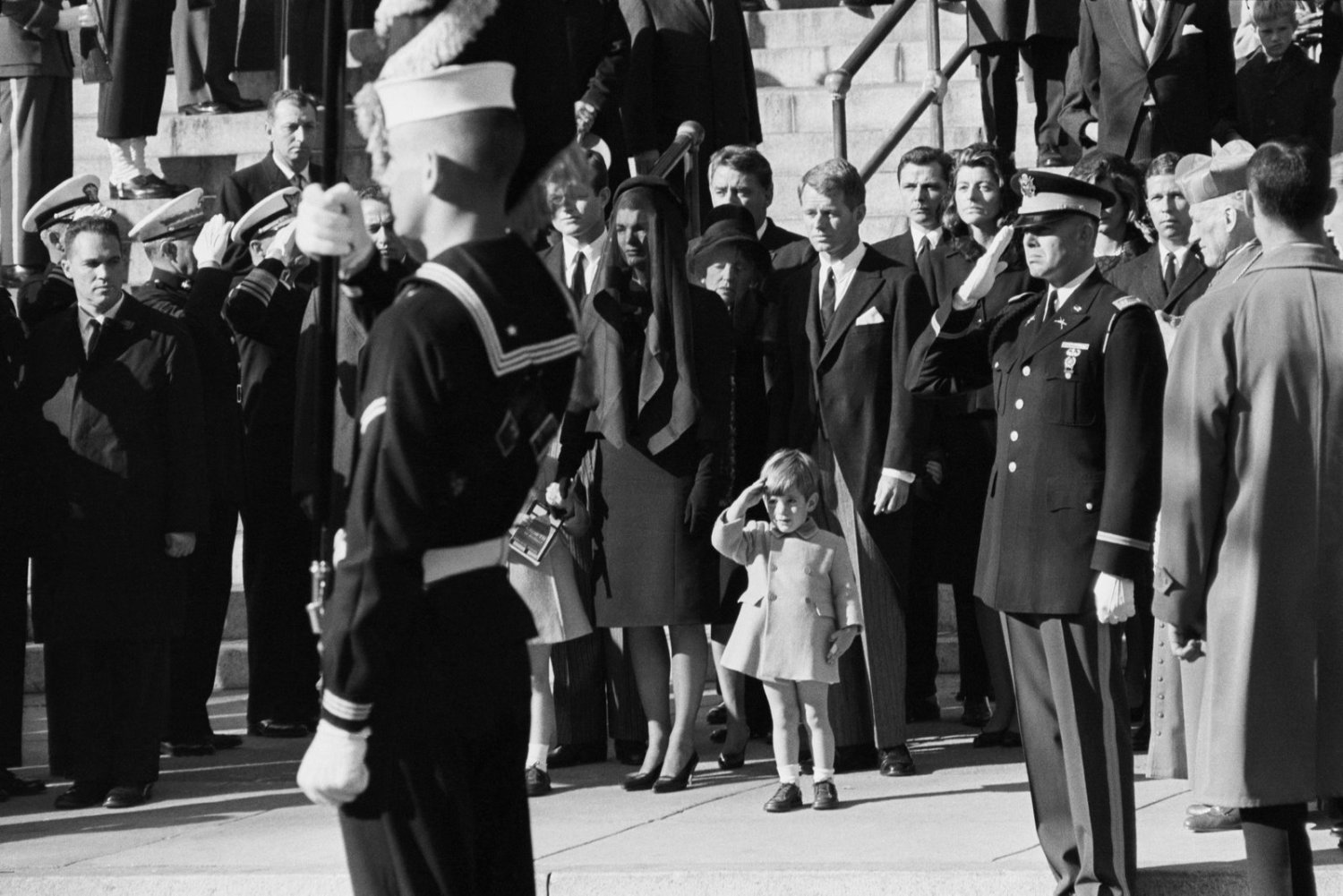 Here Kennedy's family attends the funeral in Washington DC. Kennedy's wife Jackie is visible next to his son John Jr. and his brother Robert. 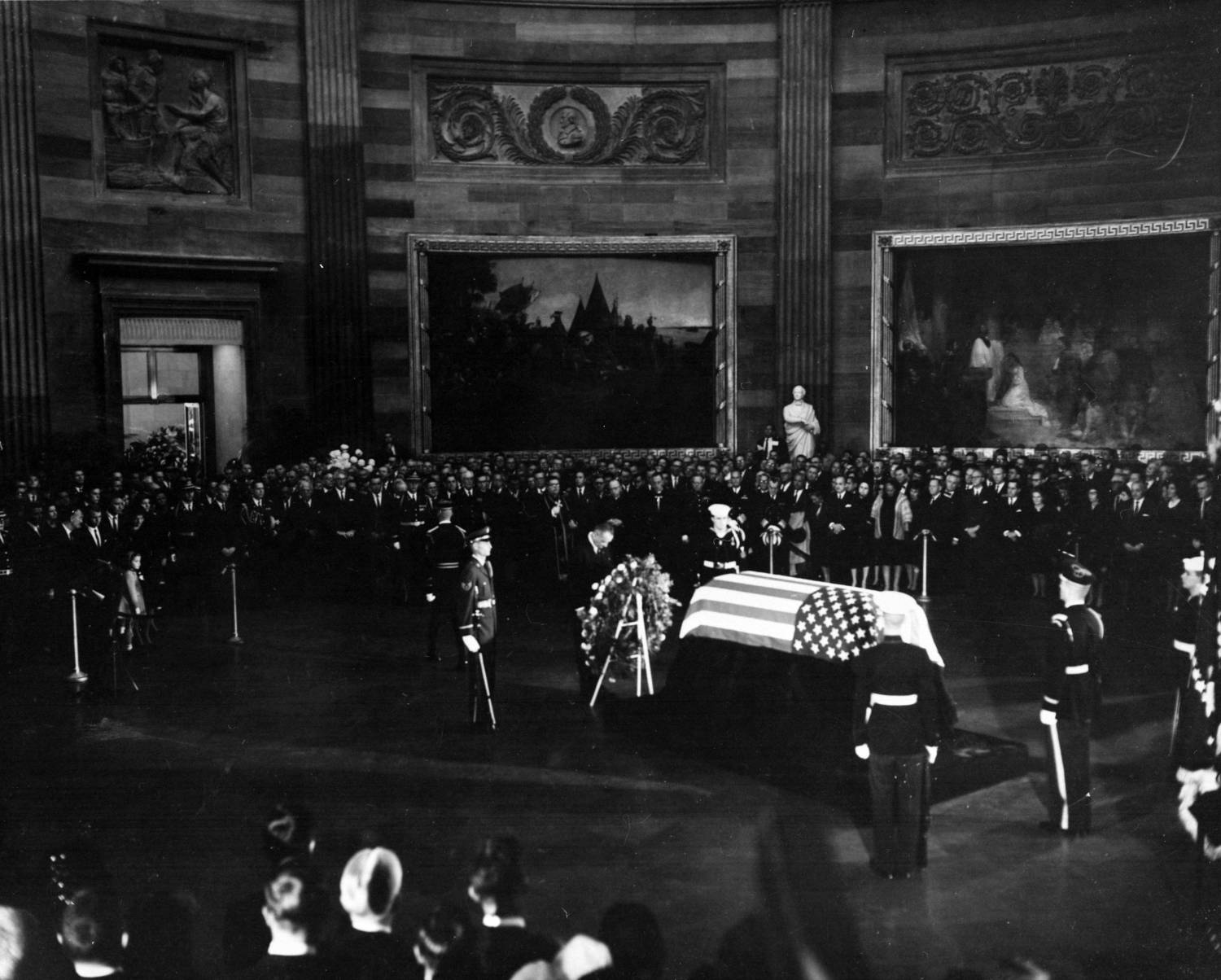 The sight of the coffin draped in an American flag in the Capitol building is one of the most powerful JFK assassination photos. 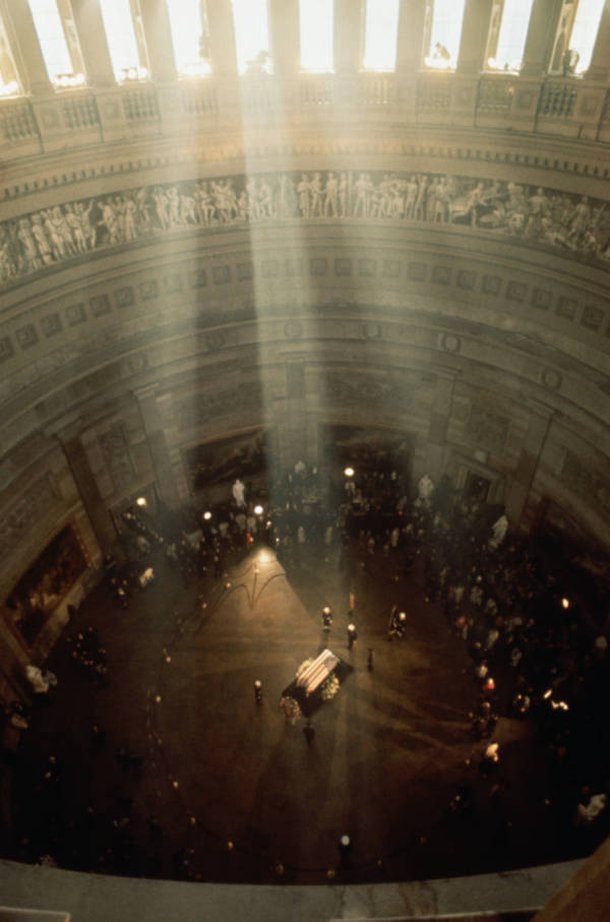