Here are celebrities' most embarrassing moments caught on camera by paparazzi while at exclusive parties.

We don't know about you, but we're a bit tired of seeing our favorite celebrities looking so polished and perfect.

But thanks to the hordes of paparazzi, we now know even the most poised celebrities aren't perfect all the time. They, too, are just as human as we are. So they are no strangers to weird moments.

We've compiled a list of some of the funniest celebrity slip-ups happening at the most exclusive events in town.

In the pic, actress Lena Dunham was hosting a 'Barefoot Formal' dinner party at her home in Brooklyn Heights, New York, back in 2003.

And honestly, we've no clue what on earth she's doing or what's going on in her head.

Can someone teach the lady how to properly drink from a wine glass! 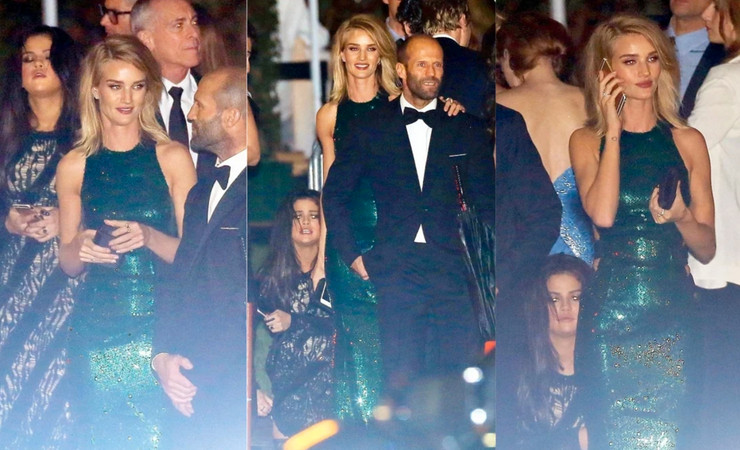 Yup, that's Selena struggling to stand up at the 2015 Vanity Fair Oscar Party.

Let's just assume she had a long night and quite a few too many. But unfortunately for her, it resulted in these hilarious photos!

In 2008 Kim was hosting her Vegas Magazine Cover Party and couldn't help but pose for a pic with a cookie in her mouth.

Looking back at the pic, she probably wishes she could erase it from the internet archives.

Kim's sister Kourtney also attended the party, obviously. And she, just like Kim, had her food photo moment.

Did folks really do that 12 years ago? Was posing with food at parties a thing?

If so, we're glad this is not a thing nowadays. 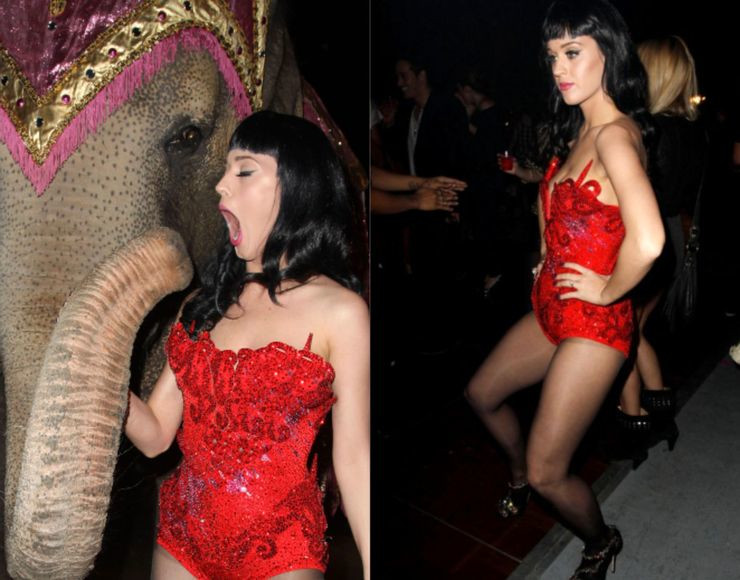 In the pics, Katy Perry was attending internet blogger Perez Hilton's birthday party back in 2010.

And as you can see, things definitely seem to have turned weird.

What is Katy really doing? That pic does make us slightly uncomfortable. 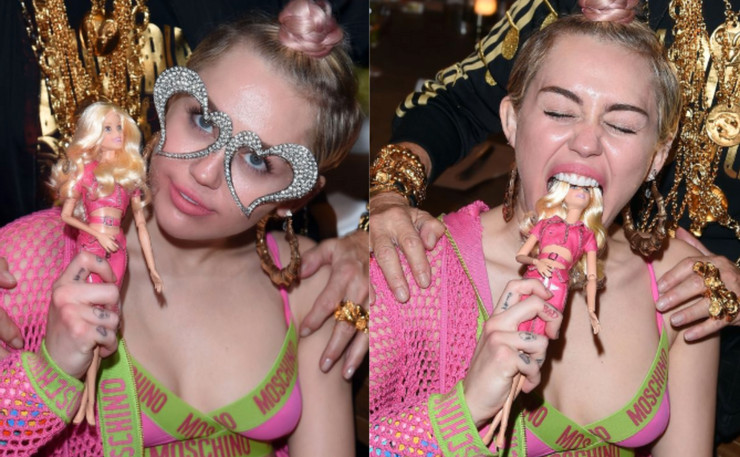 Well, she not only rocked a very funky pair of glasses but also—at some point—decided to put the Barbie doll in her mouth.

#7 Burgers Are an After Party Must-Have, Just Ask Christoph Waltz

In the photos, Christoph Waltz is living the good life at the 2015 Golden Globes After Party.

Seriously, it's pretty awkward to see glamorous Hollywood stars all dressed up for a fancy award night only to end up with a burger in their hands.

#8 Here's Another One, Chrissy Teigen

The model and television personality certainly doesn't care if munching on a burger isn't very ladylike.

This photo was taken at the 2015 Vanity Fair Oscar Party. And judging from her face, it seems that this was the highlight of her night.

At the 2014 Vanity Fair Oscar Party, a paparazzi captured this iconic and slightly creepy moment between Ben Affleck, Liam Hemsworth and Chris Hemsworth.

We aren't sure what was happening inside Ben Affleck's head, but we wish we knew! 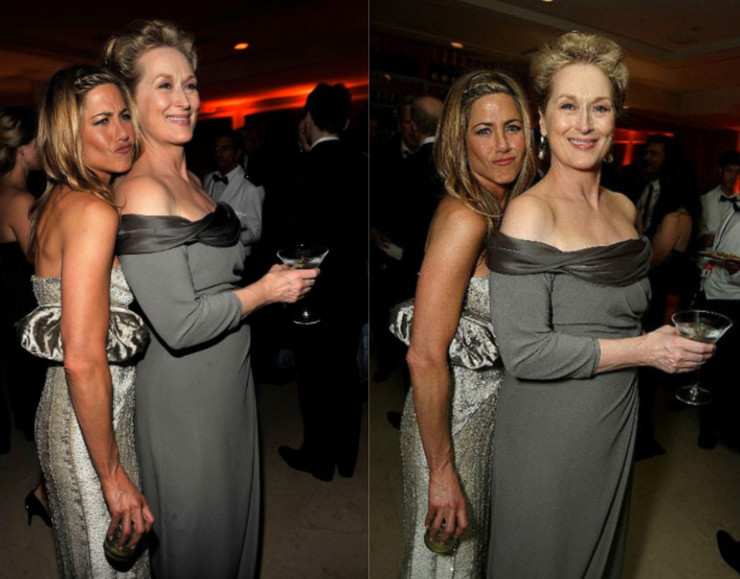 But 11 years later, the pic certainly went from being cute to cringy. We hope she doesn't pose like this anymore. 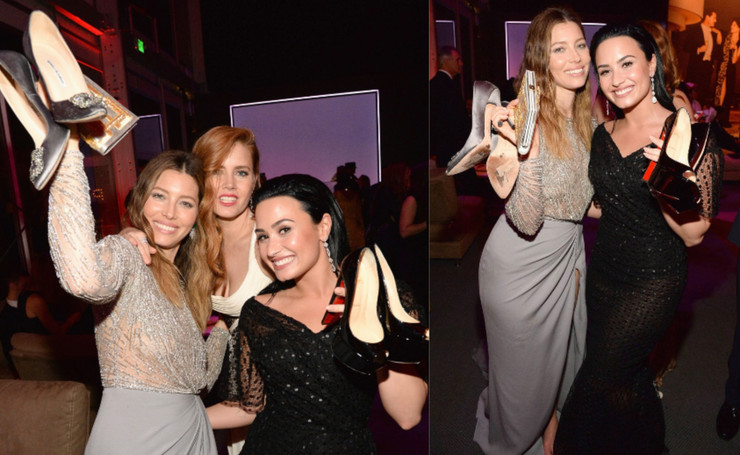 When you think of a Vanity Fair Oscar Party, you don't expect celebrities to be taking their shoes off.

That's something only us mortals do, of course, when attending boring parties with other mortals. 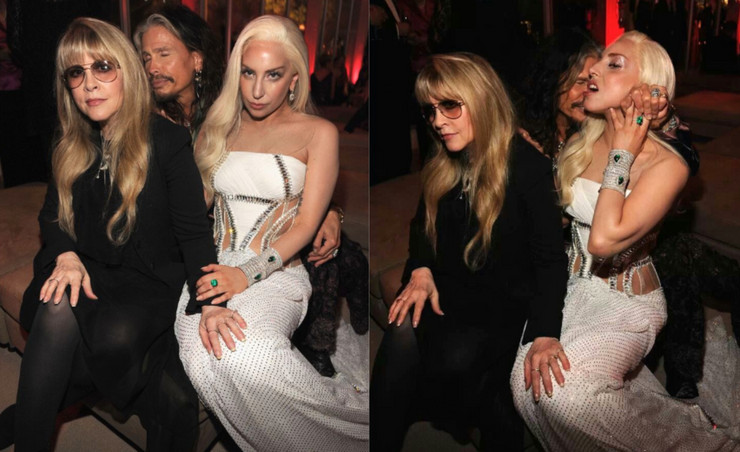 Here are the A-listers at the 2014 Vanity Fair Oscar Party.

It seems the three stars enjoyed each other's company so much that they chose to share the corner of an ottoman. 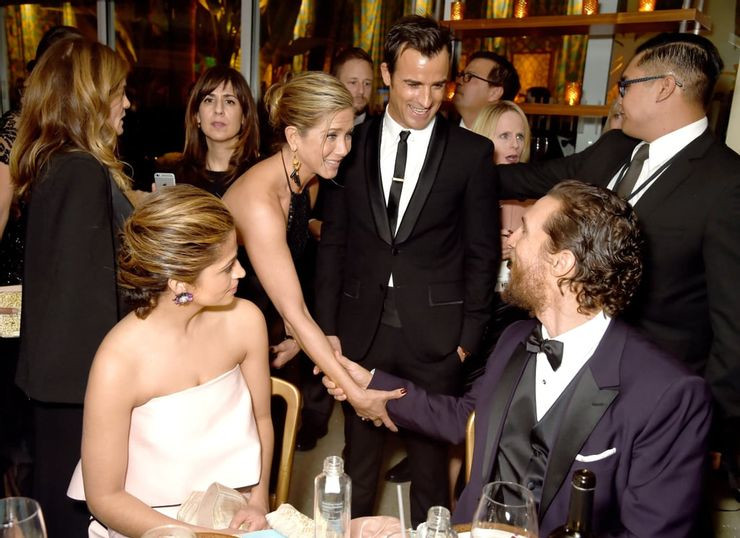 Honestly, seeing even celebrities go through an awkward handshake gives us life!

Back in 2015, at the Golden Globe Awards After Party, Jennifer Aniston and Matthew McConaughey did exactly that. 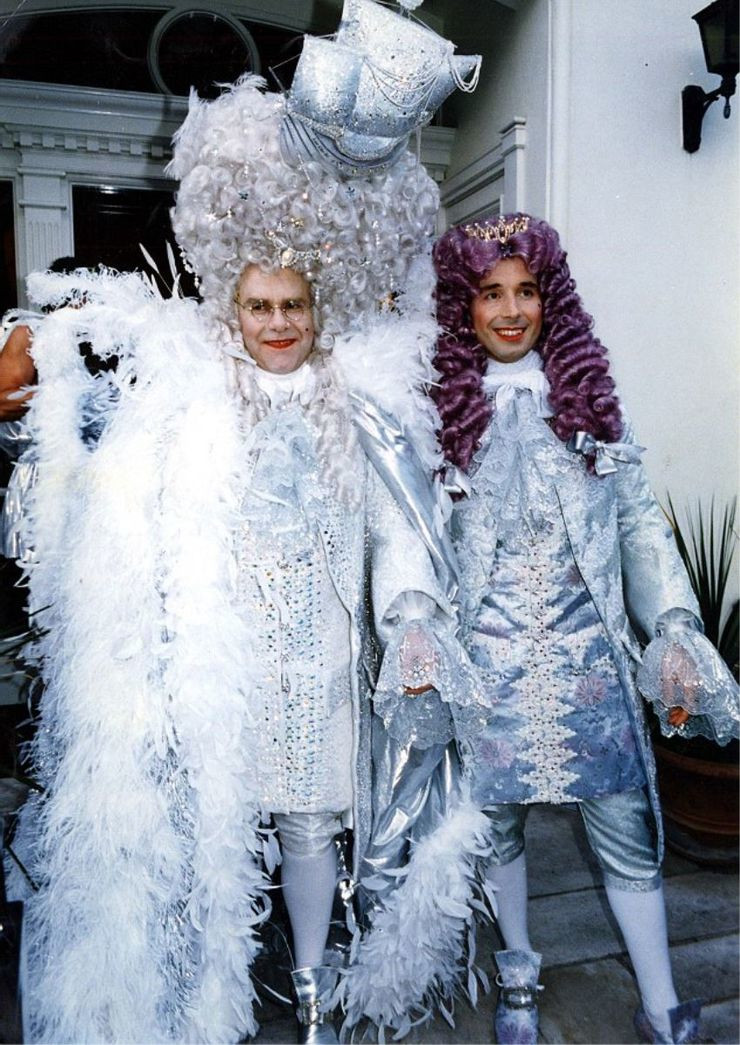 If any celebrity wore this outfit, we would exile them to a remote island for the rest of their lives.

But Elton John, somehow, gets away with it. This was his 50th birthday, so we'll forgive his faux-pass.

But good lord, that's a lot of material!

#15 Christina Ricci Was a Mess during Paris Fashion Week 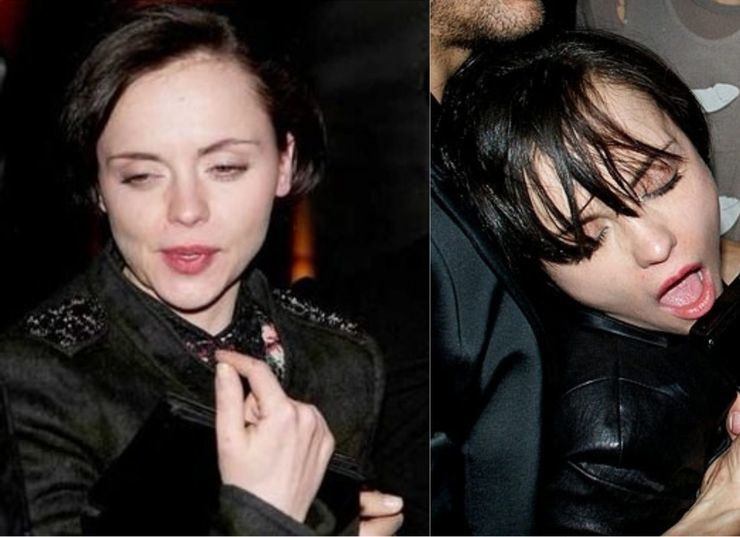 After Jean-Charles de Castelbajac's Ready to Wear show, Christina Ricci visited the exclusive after-party to have a good time.

Well, it appears she had a whole lot of fun.

The actress was photographed many times throughout the night. A few shots even captured her with her mouth wide open.

#16 Kanye West Served Us This Look, but Mariah Carey Wasn't Into It

We're used to seeing Kanye so serious that we almost forgot he ever smiled.

In 2005, the star attended the Versace store Relaunch After Party Dinner in London with Mariah Carey. And he blessed us with this awkward face! 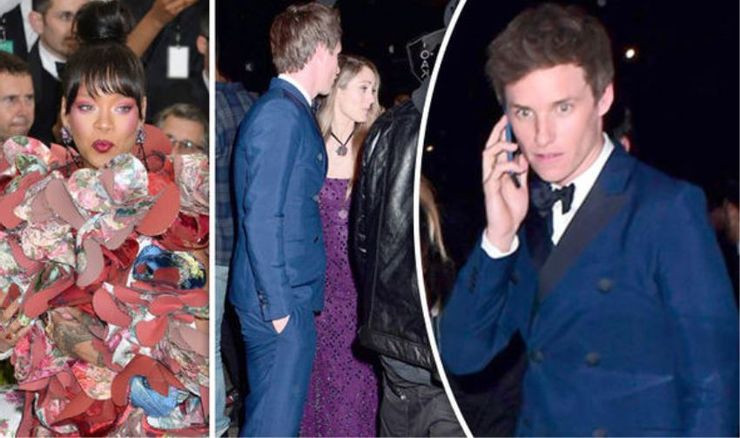 After the 2017 Met Gala, Rihanna threw an exclusive bash at the 1OAK club.

While she invited many of Hollywood's elites and musicians, she sadly turned Eddie Redmayne and his wife, Hannah Bagshawe, away.

That's so embarrassing for a celebrity.

#18 Cardi B's Sing-Along Is Certainly Something Else

Cardi B sang her heart out at the Tanduay After Party in 2017.

While we love seeing the rapper all hyped up, she probably hated seeing these photos the following day!

This happened at an after-party of the movie Alpha Dog back in 2007. 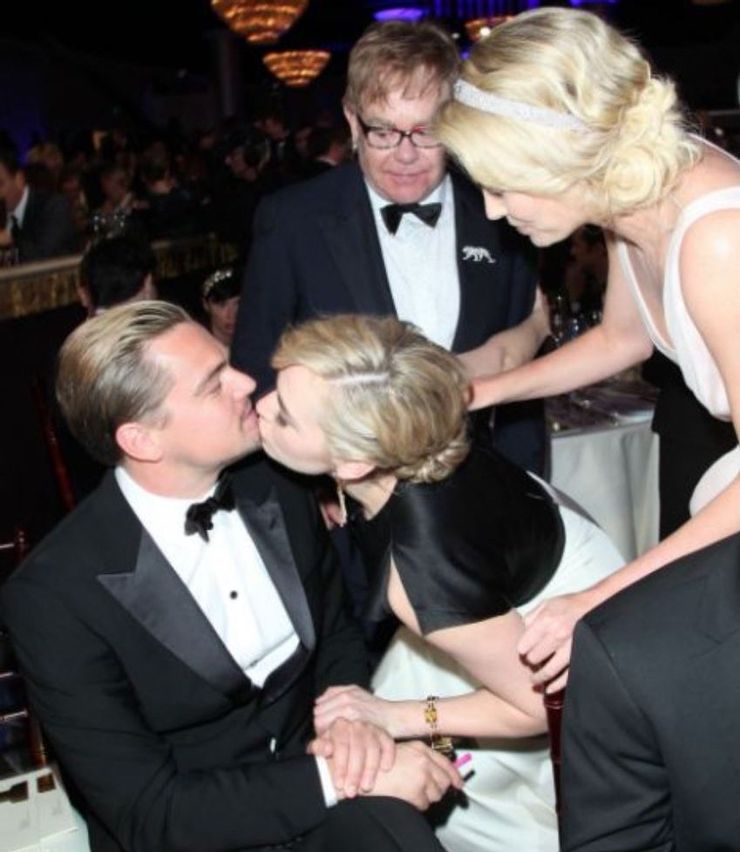 Leonardo DiCaprio brings out the awkwardness in almost everyone.

It doesn't matter whether you're a superstar or a long-time friend. You'll all geek out a little.