There was a time when almost two million people proudly called Detroit city their home. Unfortunately, from July 2013, everything changed, as these abandoned Detroit photos demonstrate.

After accumulating a crippling history-making debt of between $18 and $20 billion, the city filed for bankruptcy. As its financial position collapsed, the people also left.

The population has consistently gone down over the years. Today, less than 650,000 people call the city their home.

There are an estimated 70,000 abandoned buildings throughout Detroit. The abandonment began in the early sixties, but it took decades before Detroit became a ghost town.

These abandoned Detroit photos better explain why the city has become a shadow of its former self. The city has lost its spark and its optimism.

Throughout the decade, those who were around said that the decline was sad and fascinating at the same time. It all seemed so unbelievable. 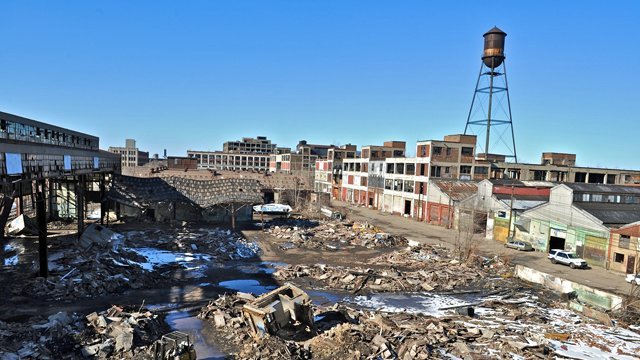 Detroit experienced a meteoric rise during the 20th century, making it one of the most historically significant places in the country due to its economic achievements.

Unfortunately, government corruption, declining resources, and a massive exodus of people in search of better opportunities soon became its undoing.

One of the most significant blows to the city was the end of its thriving car industry, and this sad reality is evident in some of the abandoned Detroit photos you are about to see.

At its peak, Detroit was the fourth-largest city in the US. The abandoned city has over 90,000 vacant lots and more than 30,000 empty homes.

The housing problem in Detroit got worse during the 2008 economic crisis. Only about 70% of the homes in Detroit are occupied. The rest are vacant, becoming the subject of many abandoned Detroit photos currently circulating on the web.

Many issues contributed to the abandonment of Detroit. For the most part, the loss of employment opportunities after the end of many vital industries made the city too expensive, and people were forced to leave.

Additionally, problems like racial segregation also played a role. In general, there has been a lot of white flight in the state of Michigan, and Detroit was not spared the catastrophe.

Homes were foreclosed due to unpaid taxes and mortgage defaults. It was cheaper for people to leave than stick around trying to pay their mortgages and taxes.

At the moment, some of these homes are being auctioned by banks for as little as $1,000. The prices are so low because, as the abandoned Detroit photos below indicate, the houses are seriously worn out.

These abandoned Detroit photos help demonstrate just how massive the city's decline has been since its financial fortunes changed. 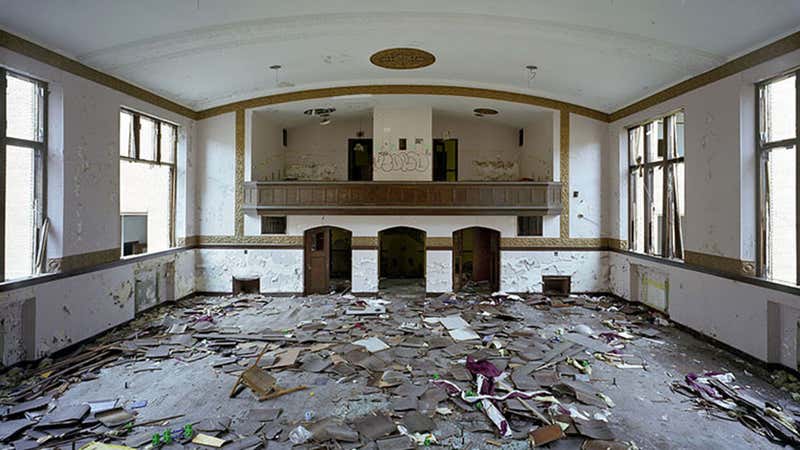 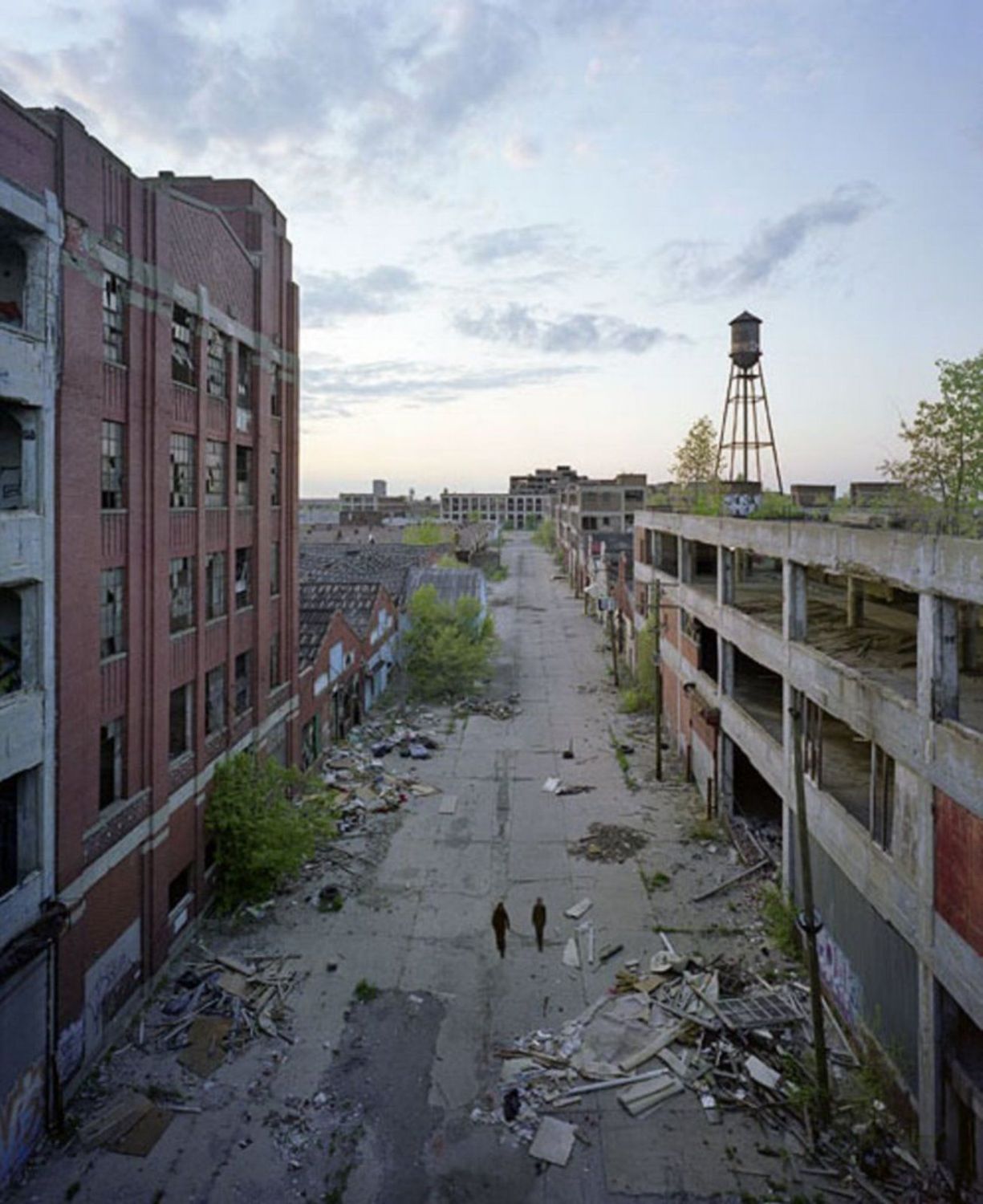 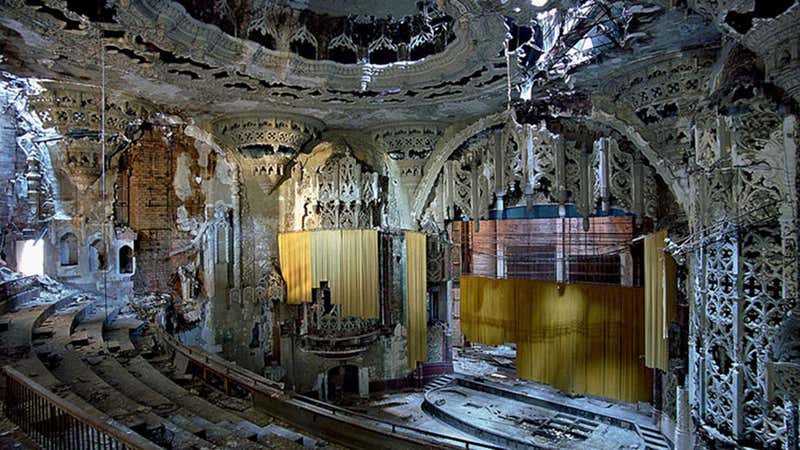 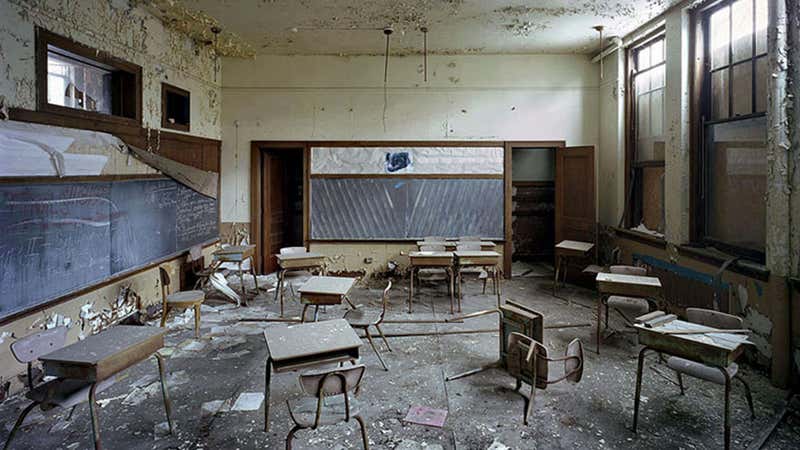 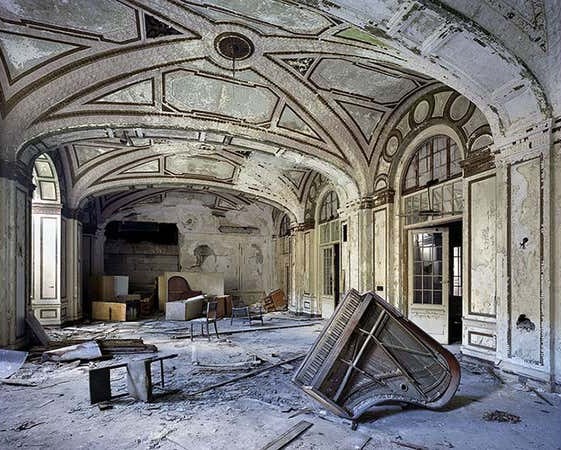 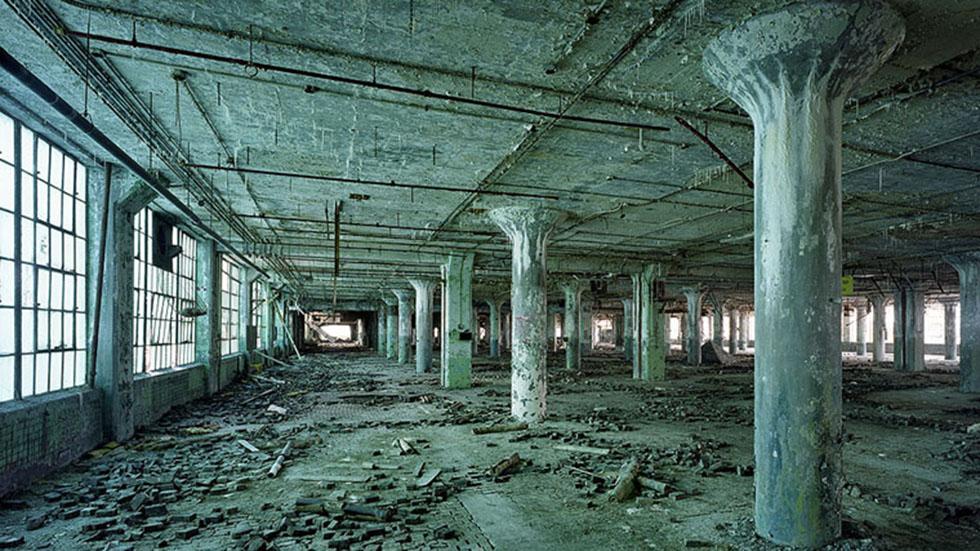 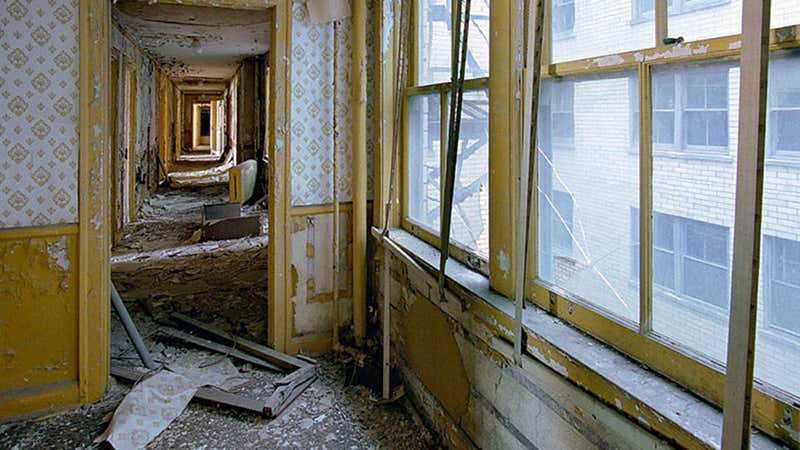 8. An Abandoned Ballroom At The American Hotel In Detroit 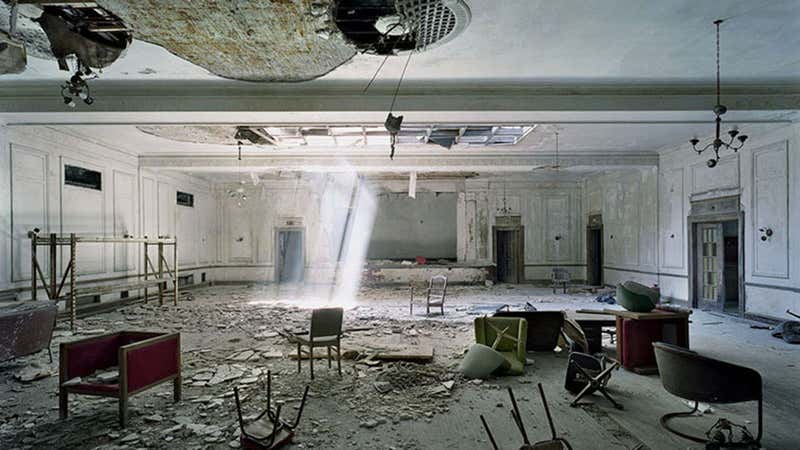 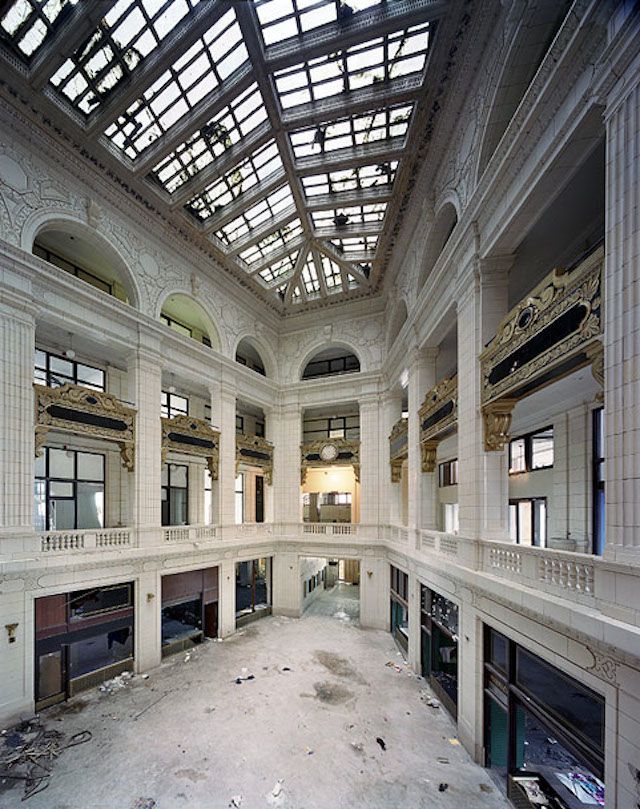 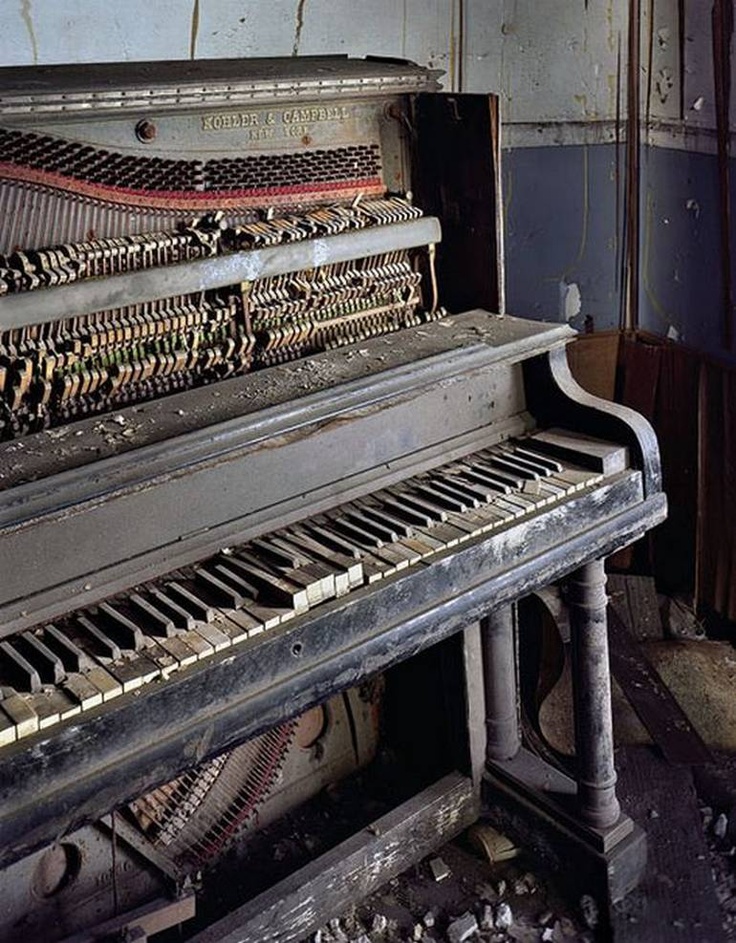 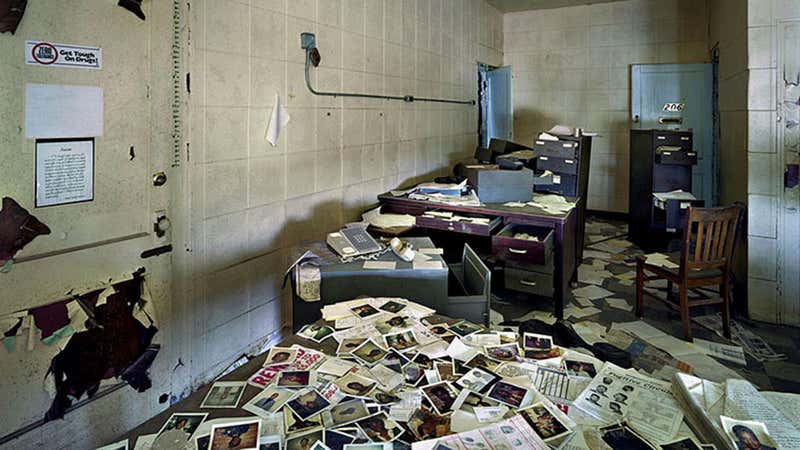 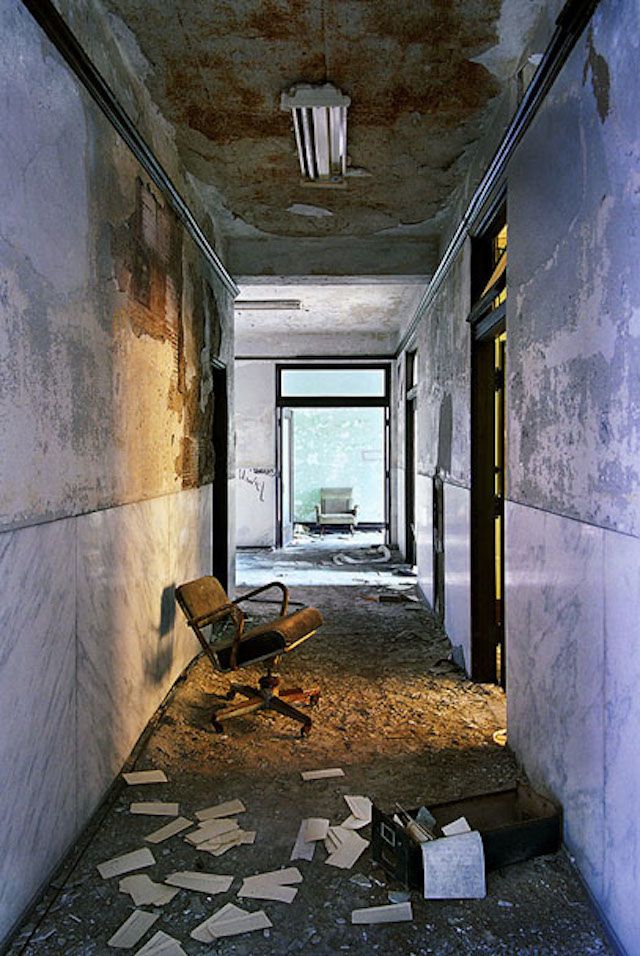 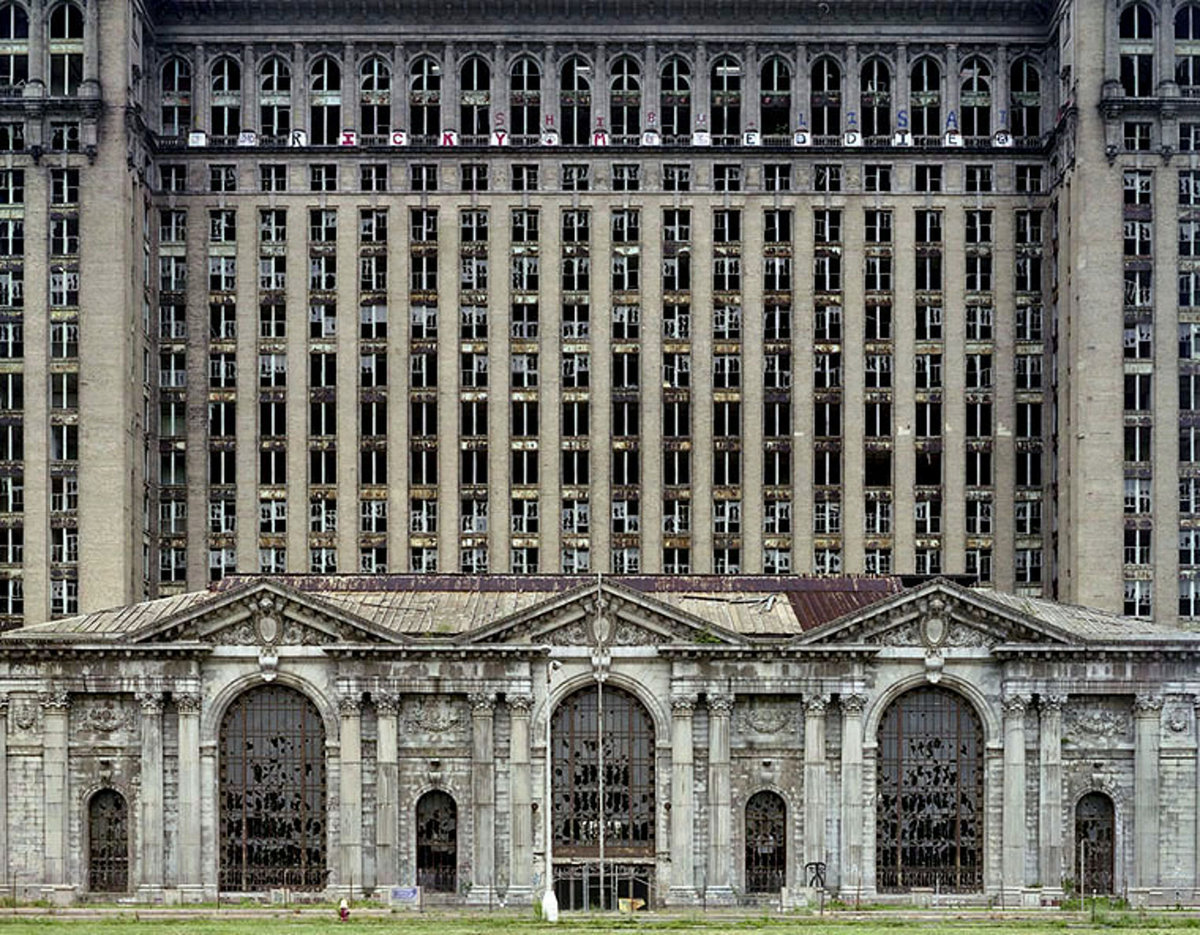 14. Former Dentist's Office At The David Broderick Tower In Detroit 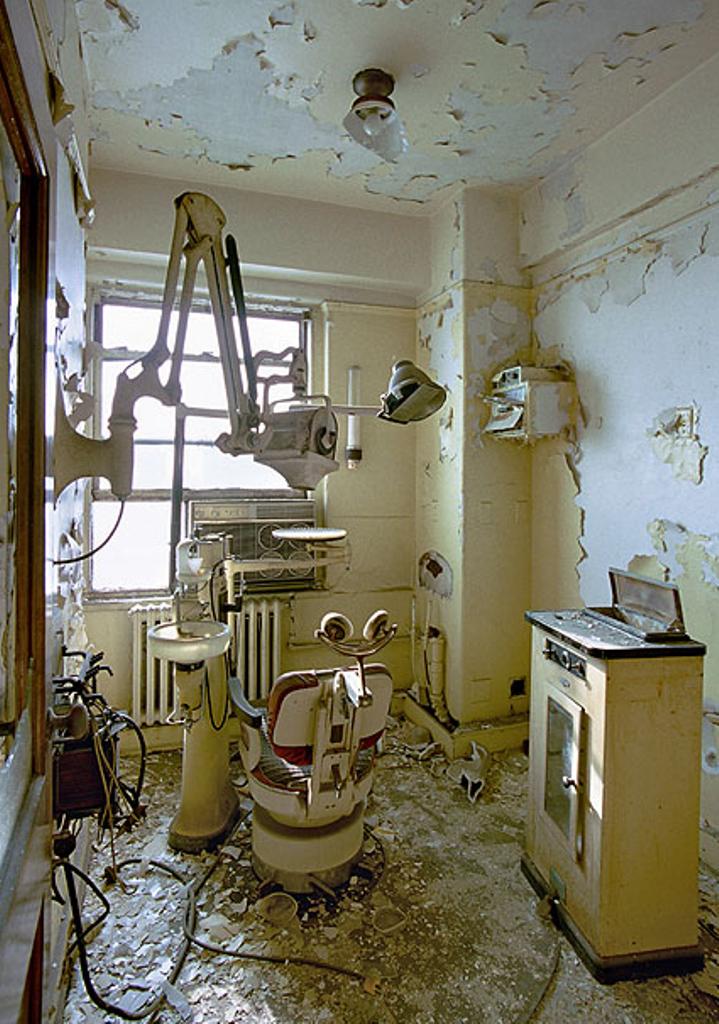 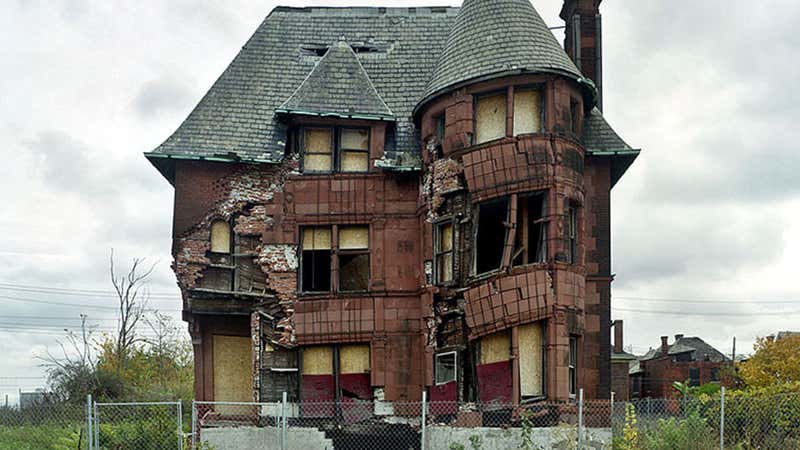 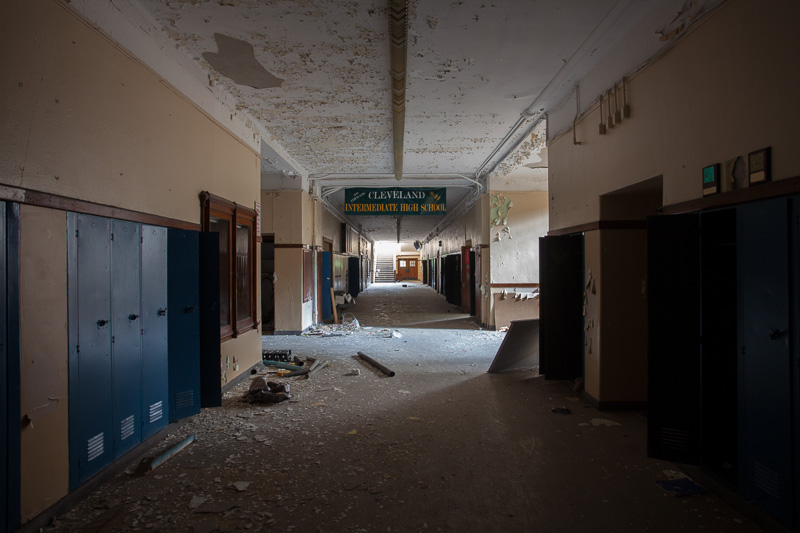 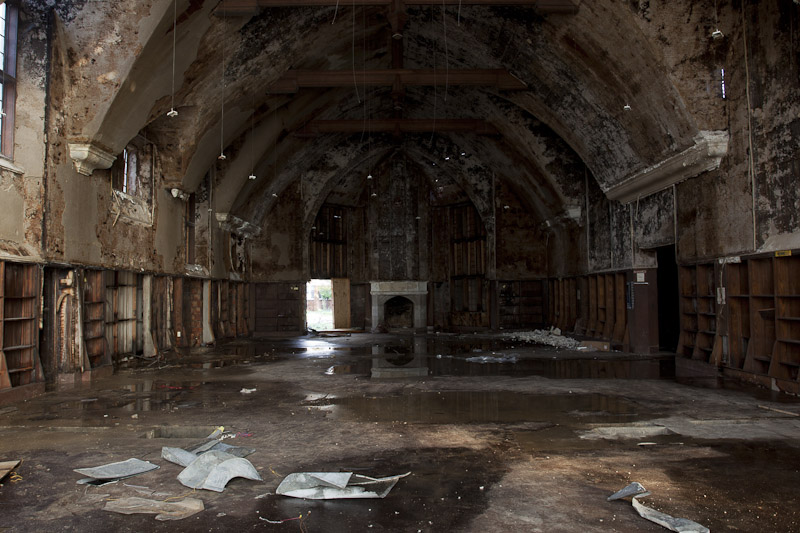 18. An Abandoned Home In Detroit 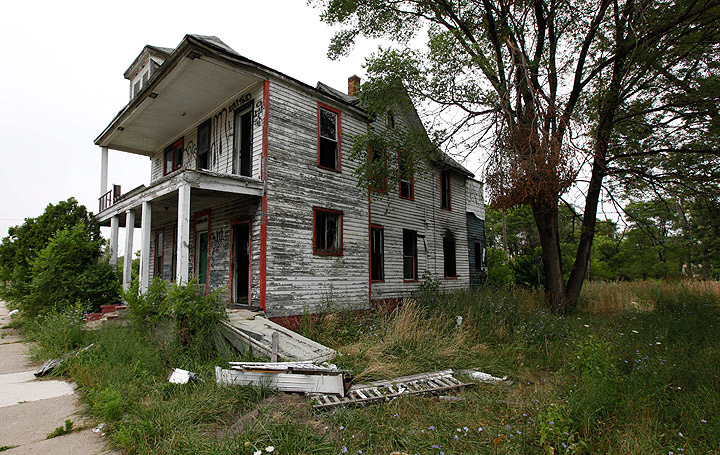 19. A Ballroom At What Was Once A Luxurious Highland Tower Apartments 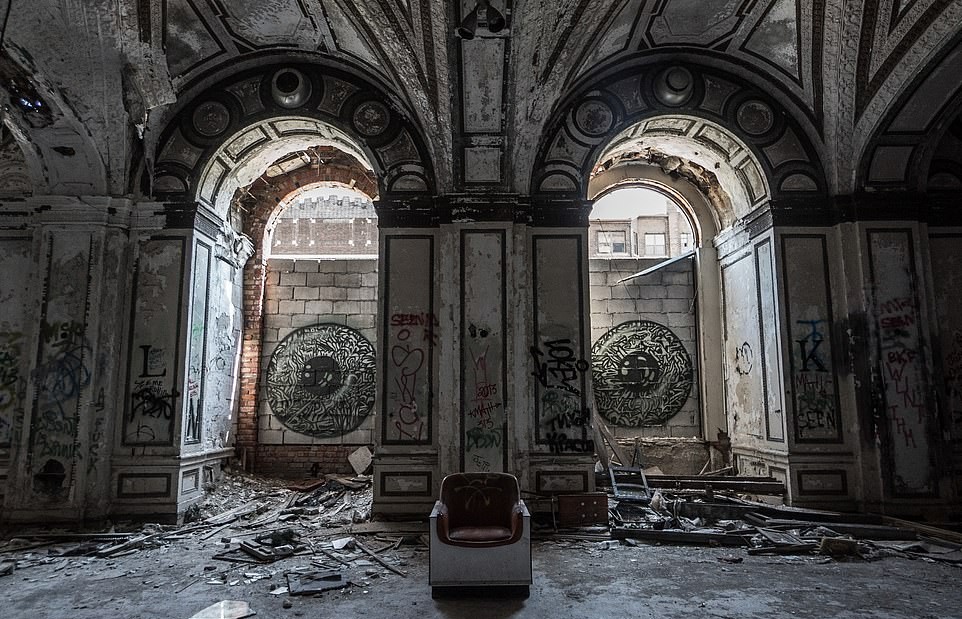 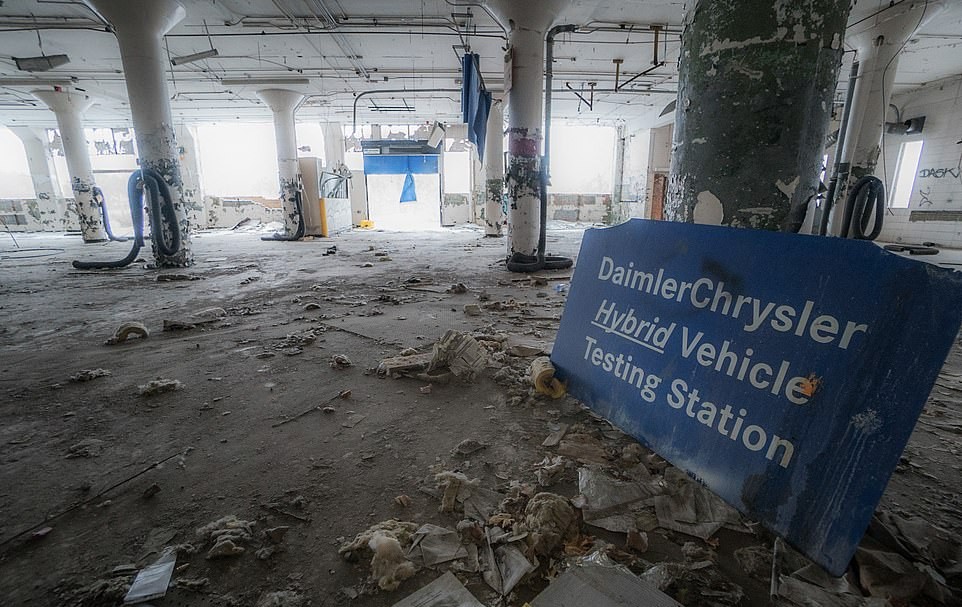 21. John S. Gray Library, Some Of The Books Were Abandoned As Well 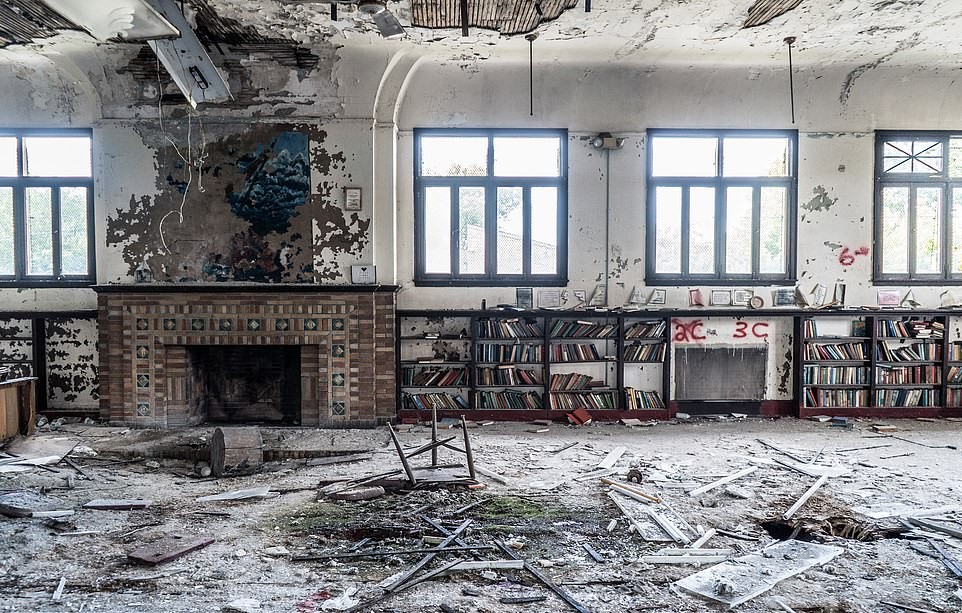 22. An Abandoned Correctional Facility, Former Home To Some Of The Worst Criminals In The State 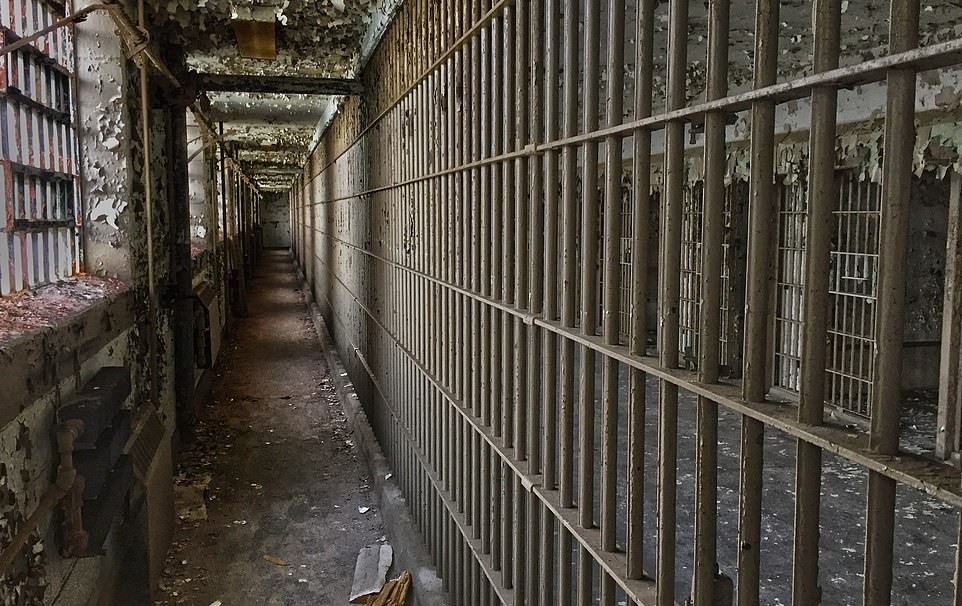 As you can see from these abandoned Detroit photos, nature has done irreparable damage to many buildings in Detroit. Buildings and structures that were previously a massive source of pride have turned into ruins, destroying the symbolism the city once had in American history.

Today, the abandoned buildings have become a source of adventure for many people visiting the once famous city. The places are beautiful and haunting, which explains the increased number of abandoned Detroit photos on the web.

After All These Abandoned Detroit Photos, Is There Hope? 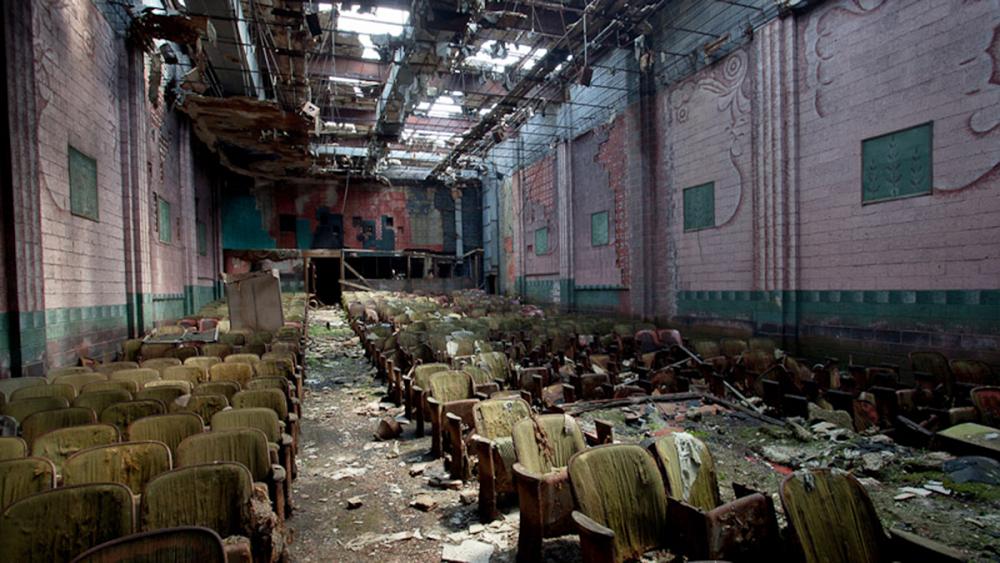 It would seem that there are also hopes of recovery for the city, although this is currently only happening in downtown Detroit. For instance, there have been efforts by Ford to revive the Michigan Central Station at the cost of $350 million. The station has always stood out for its disrepair in most abandoned Detroit photos, but that's changed.

Additionally, Little Caesar's Arena was completed in 2017. It is a massive entertainment center.

Some people are also willing to live in the city, which is why high-end condos and apartments are being developed. They have become an option for displaced millennials who want an urban lifestyle.

Obviously, with people starting to flock back, businesses such as restaurants, coffee shops, and boutiques are also making a comeback.

So, all hope is not lost for Detroit. The city could make a comeback after all, although that might not happen overnight, as evidenced by the above abandoned Detroit photos.