There's no doubt that Kevin Malone is one of the best characters from the much-loved series, The Office. His shortcomings, lack of self-awareness, and brutal honesty created one-liners and remarks we all know and love.

Actor Brian Baumgartner who played Kevin for nine seasons, made us roll our eyes, laugh, and yet, we found Kevin to be all of us.

Though not intentionally, Kevin Malone made many epic, witty statements that made us laugh, cringe or nod in agreement.

Here are some of the best quotes by Kevin Malone that prove that there's Kevin in each one of us!

1. "I Have Very Little Patience For Stupidity"

The line from season 7, episode Todd Packer, became so popular that you'll find it on T-shirts and mugs. It's a classic, and it turned Kevin into a comical genius.

Though it's ironic for the viewers, the line is on point. The way Kevin Malone said this simple truth is quite iconic, despite him not being the sharpest tool in the box.

2. "The Only Problem Is Whenever I Try To Make A Taco, I Get Too Excited And Crush It" 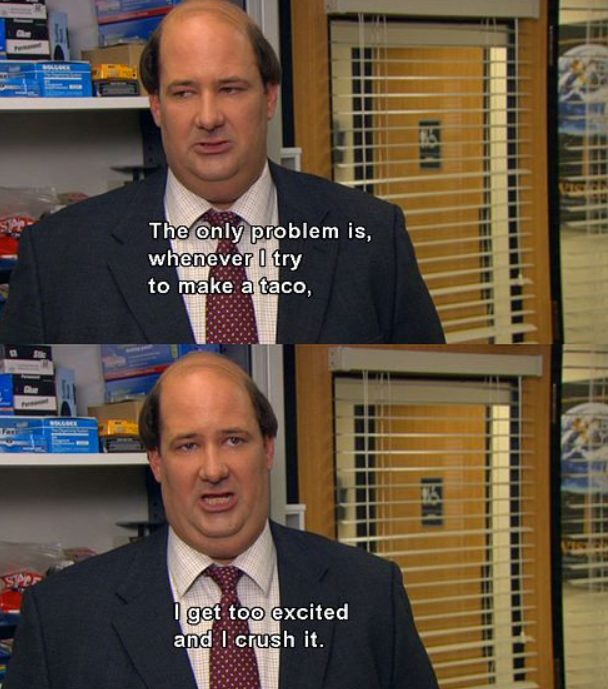 Kevin's love for food is an ongoing joke on the show. In fact, one of his most brilliant moments included famous chili, while another is related to M&M's at his work desk.

It's clear that Kevin's a fast-food lover, and though we don't actually crush tacos, we can understand his excitement.

In a much deeper sense, Kevin's statement could be seen as a way of saying that if you love something a bit too much, you're destroying it. Yet, we don't think he was planning to get all philosophical.

3. "The People Here Are Amazing Debaters. I Guess You Can Say They Are Master-baters" 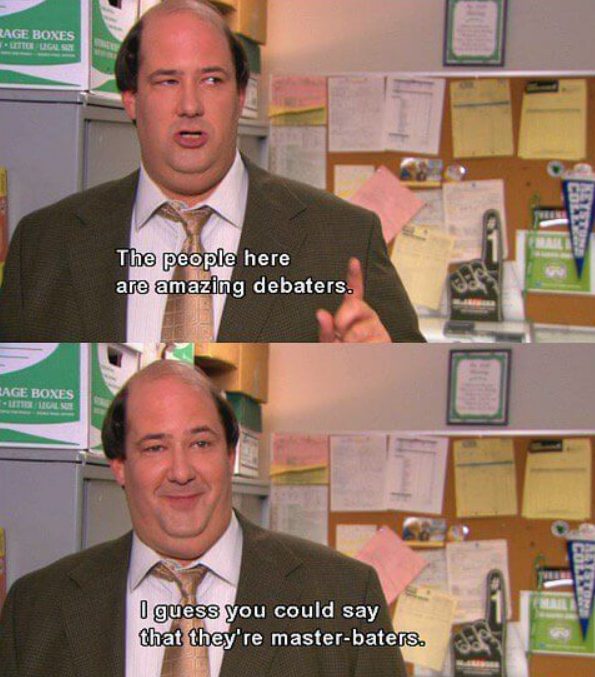 Apart from food and his love for The Police, Kevin's wordplays are among the things we love about the character so deeply.

Saying that his coworkers are great at debating is great. But, every now and then, we all want to mix it up, and we often get similar results as Kevin.

Though this quote is often overlooked, it shows that Kevin's creativity that goes beyond his suits and bad toupee. 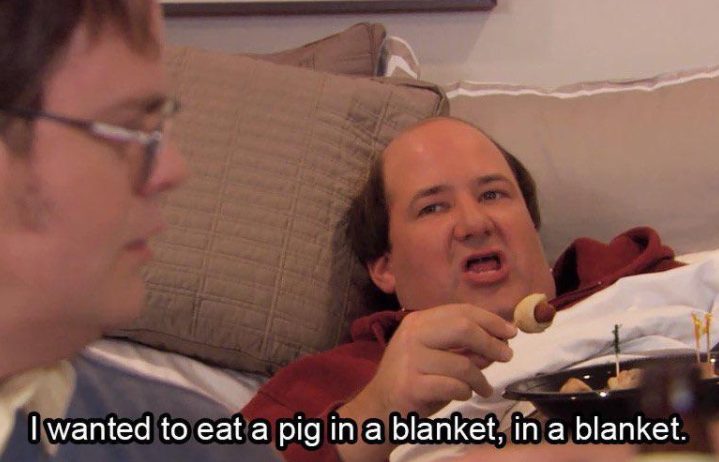 In an episode Viewing Party, we see how The Office characters would look if they were a real family.

Since Kevin's a proper foodie, he takes his commitment to eating very seriously. While others are occupied with family-like drama, Kevin's in a blanket, eating pigs in a blanket.

It wouldn't be as hilarious if Kevin didn't make himself too cozy on Gale's couch, though it's pretty admirable how he managed to find the perfect spot to watch Glee and enjoy his dinner.

5. "Me Think, Why Waste Time Say Lot Word When Few Word Do Trick" 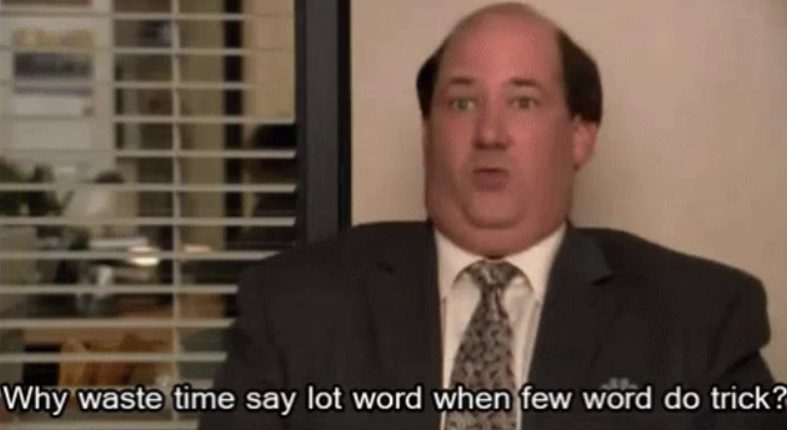 Kevin Malone's time-saving technique didn't sit well with the rest of The Office gang. Yet, he was convinced that skipping letters and words would be his genius moment.

Though clearly, it's not a great idea, even for Kevin, it is relatable since we're all searching for ways to save time. In Kevin's case, it only made things worse.

The idea of talking like a Cookie Monster especially irritated Oscar and his anger is beyond amusing. You can find this shorten words gem in the second episode of season 8, called The Incentive. 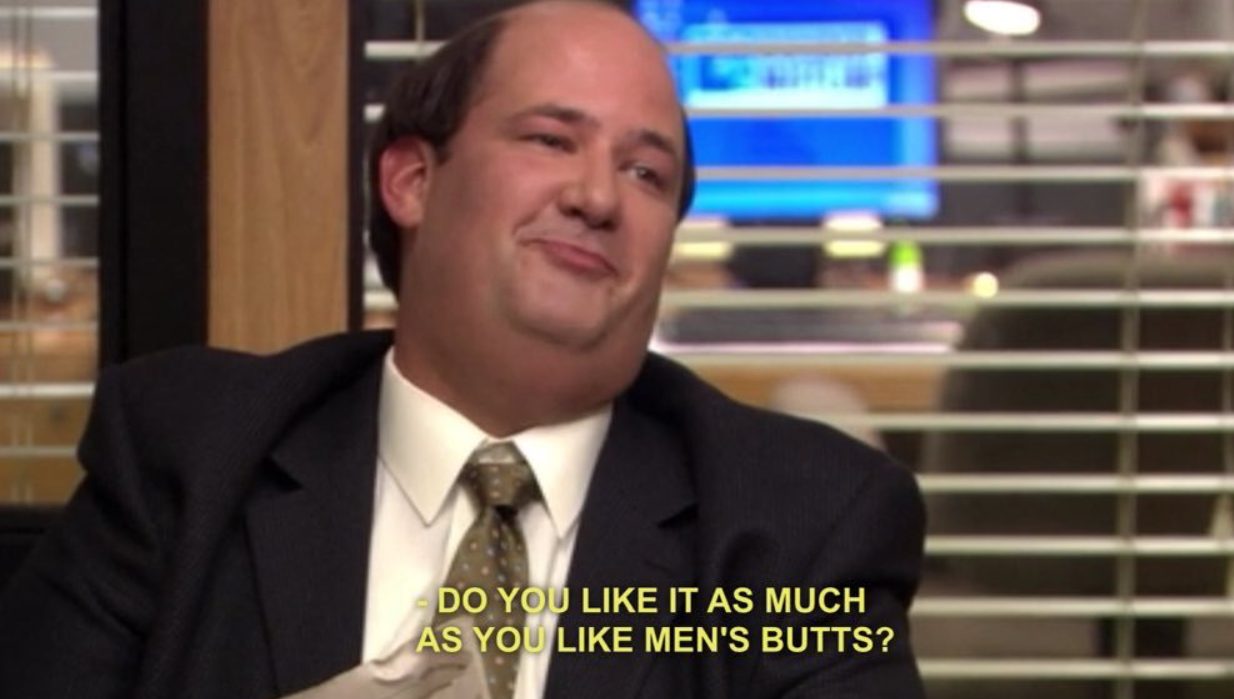 A simple conversation turned south when Kevin asked Andy whether he liked tea as much as men's bottoms.

Kevin was sure that Andy's gay, so he blurted out this one line with a smile, making the whole thing awkward and cringy.

It's not the ideal way to quiz your coworker about their sexuality, but it's way better than forcing a kiss on them, as Micheal did with Oscar.

At this point, even Andy was questioning himself whether he was gay, and so did the rest of us. While he was all about the ladies, the fact remains that this Kevin Malone's savage quote is epic for all the wrong reasons.

7. "I Just Want To Sit On The Beach And Eat Hot Dogs. That's All I've Ever Wanted"

In season 3, episode 23, everyone's at the beach, and some are having a better time than others.

Pam made some bold moves while Michael was trying to make his employees compete and show team spirit. In the meantime, Kevin's happy to have some food and chill out on the beach.

It's not a stretch to say that this is the dream life of pretty much every person on the planet, making Kevin the most sensible out of all fantastic characters on the show. 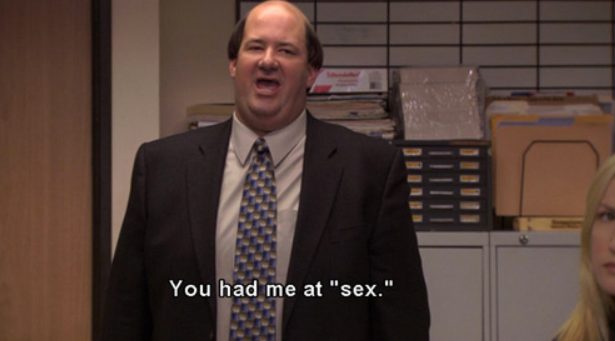 While Michael was demanding attention, he said the magic word, sex, and while it didn't work for Stanley, he got Kevin excited.

Though Micheal called him a "pervert," many of us can relate to this instance. Kevin isn't quite the ladies' man, but it doesn't mean that his libido isn't in place. 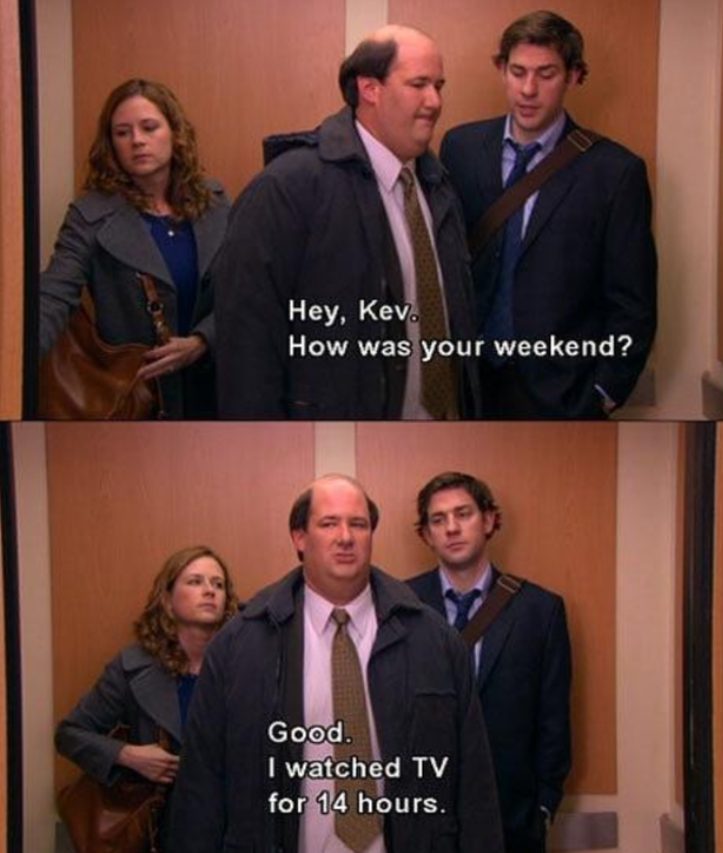 Back when The Office was on, binge-watching wasn't recommended, but we did it anyway. Things have changed, and now, more than ever, we are entirely in sync with this statement.

While Pam and Jim gave Kevin a side-eye when he honestly answered what he did all weekend, we bet that they wouldn't judge Kevin now.

Kevin Malone was self-quarantining way before the pandemic. It was sad at the time, but to quote Michael Scott:

10. "I Got Six Numbers, One More, And It Would Have Been A Complete Phone Number" 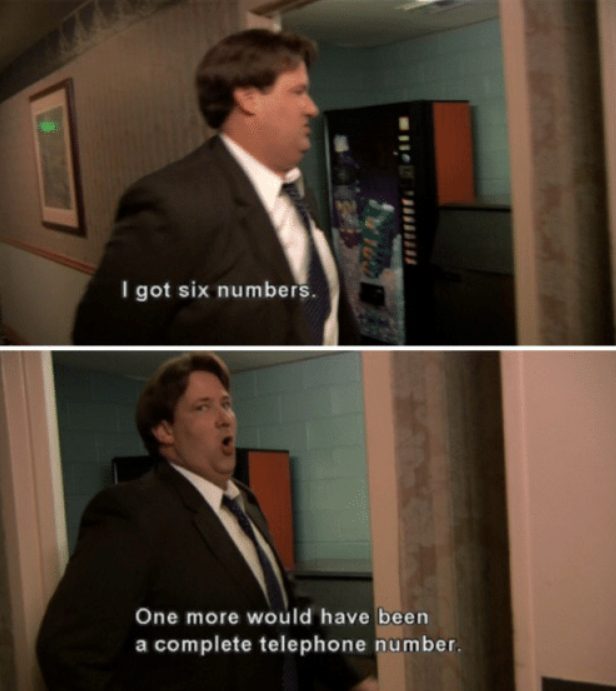 Dating is hard. We can't all be opened about our sexuality like Meredith. Nor do we have Dwight's animal magnetism.

Kevin's confidence is often admirable yet confusing to The Office fans, but his optimism is part of what made him lovable.

Despite his shortcomings, Kevin's a good, artistic guy who always sees the glass half full, even when it's clearly completely dry.

11. "I Want To Be Wined And Dined And Sixty-nined" 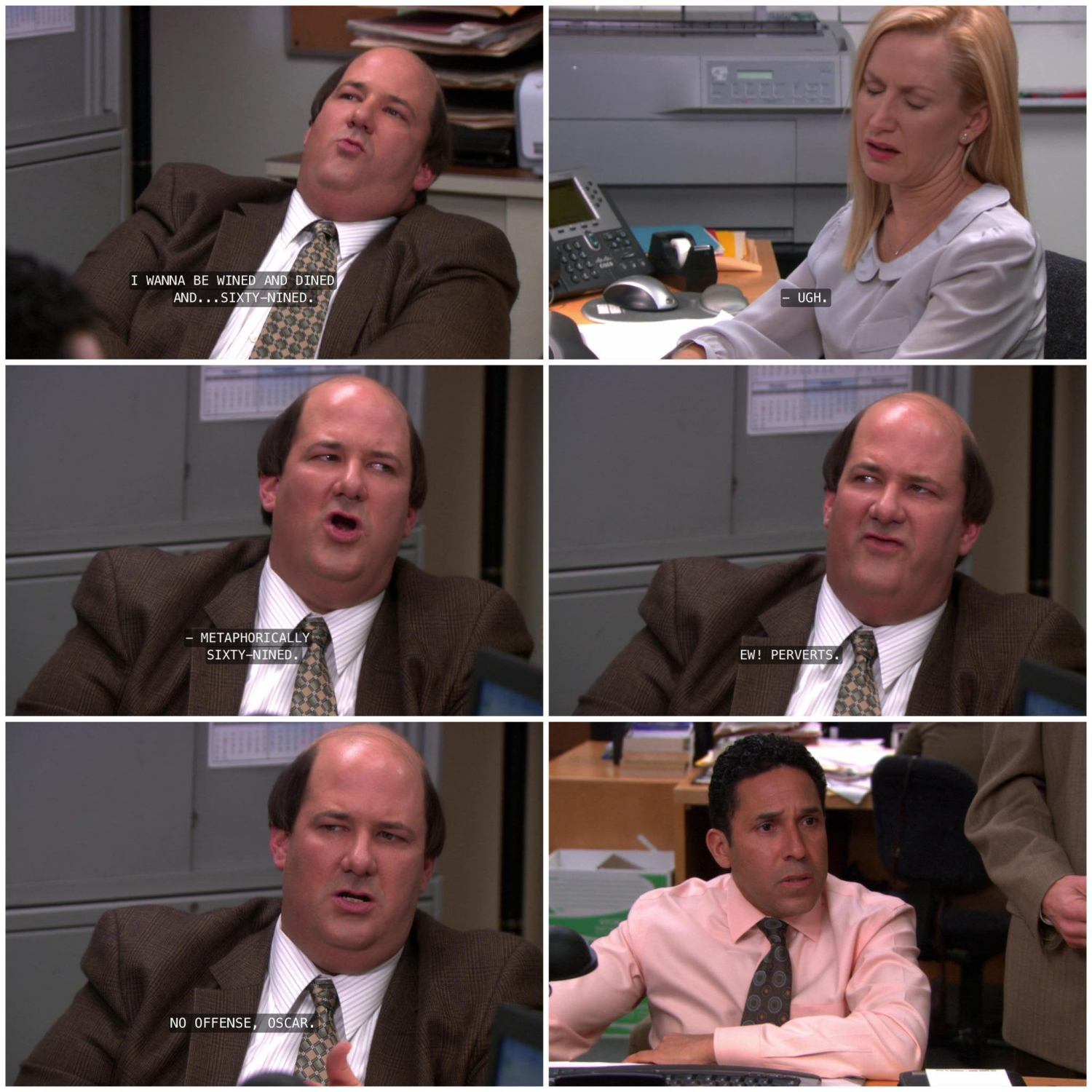 Despite not articulating it properly, Kevin had one line that resonated with all the viewers. At the same time, it's romantic and dirty, kind of like all of us.

Kevin Malone simply wants to be taken care of, and there's nothing we can say other than: MTE!

Oscar and Angela may have had their issues with Kevin's views on romance, but it's not like they're perfect. They dated the same guy!

12. "I Do Deserve A Vacation. Sometimes Batman's Gotta Take Off His Cape"

Kevin was never a hard worker. In fact, he might be among the worst accountants in TV history.

What's even more fascinating is that Kevin's statement comes after the gang is jealous of Pam's maternity leave in the Special Project episode.

Whether you're a regular Kevin at work or a proper Dwight, it doesn't matter since this quote is a precise answer to work-life balance. Pretty relatable, despite, once again, Oscar's shocking side glance!

Kevin Malone Is Our Spirit Animal

Each character had something unique about them. With Kevin, things were quite simple: what you see is what you get, which is not what one could say about Dwight or Michael.

He captured our hearts from the background, often saving the whole scene with just one quote. Kevin Malone is an everyday hero we sure would like to have in our office!