When we watch a Disney film, we get lost in the stories - the characters, the music, and the magic.

Once the movie is over, we vaguely think about how it's all just animation and not real. However, one artist has imagined what things would look like behind the scenes, and it's hilarious. 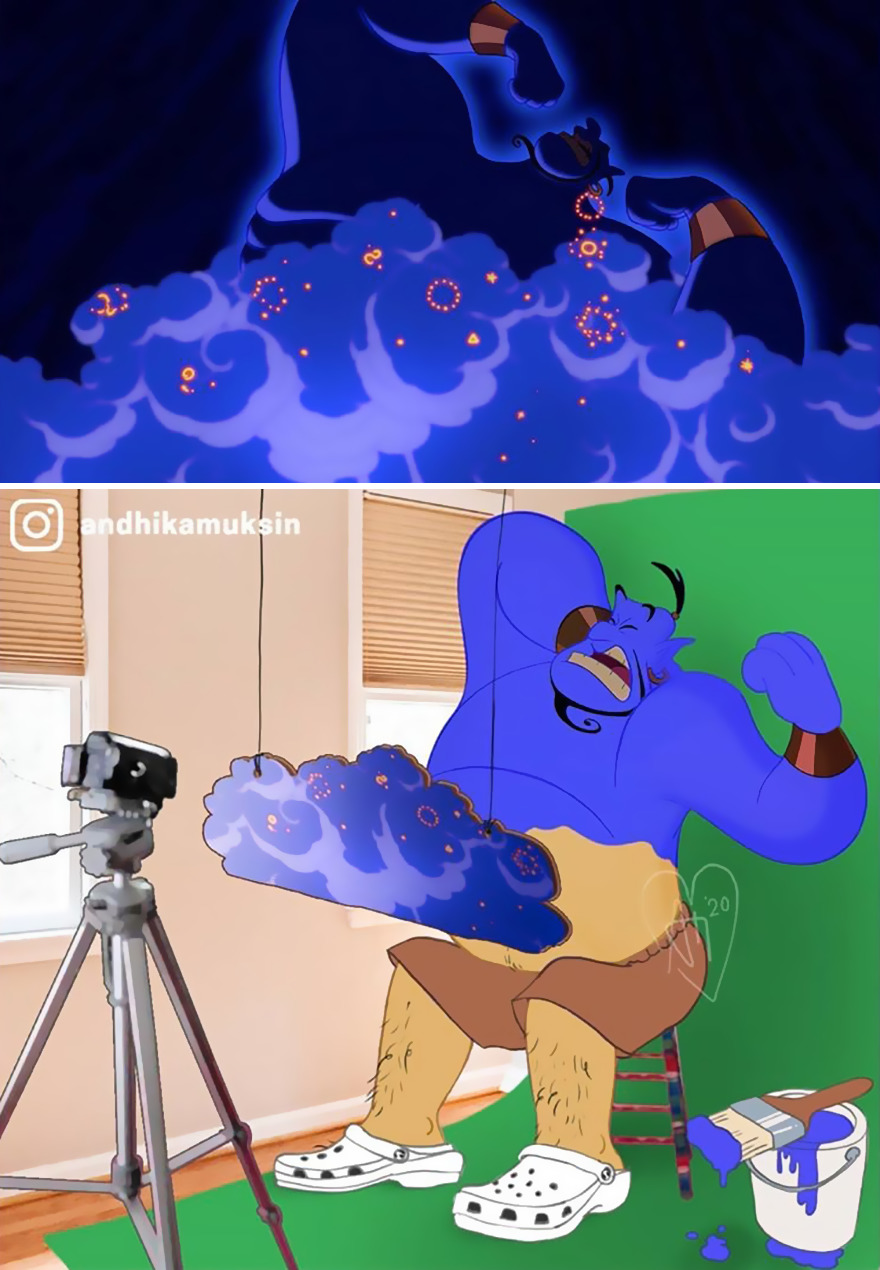 Andhika Muksin has created art inspired by what he thinks Disney characters get up to when the camera isn't rolling.

In his drawings, we see popular and beloved Disney characters as if they're normal actors, getting paid to play a role.

It's a different take on the classic image of Disney and definitely worth checking out.

A Comedic But Mature Perspective

Here's what Andhika had to say about why he has started drawing the likes of Ariel and Jasmine in such a different light: 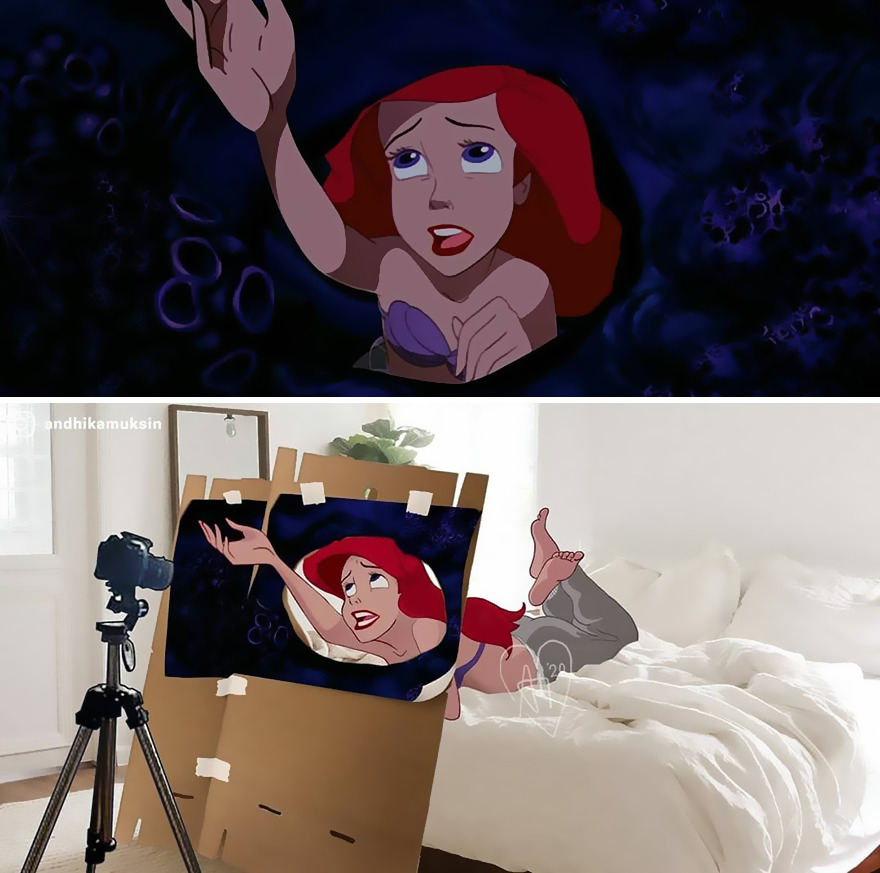 As a Disney fan since childhood, I've never stopped loving them even after I went into adulthood. But as I grow older, I start to see these childhood icons in a new light; we see things differently than when we were children.

So this is basically how I come up with my ideas, bringing these childhood icons into a more of an 'adult' perspective, in a comedic way.

Andhika's art is very popular and gets shared on the internet quite often. His first public art was shared in 2017. He had photoshopped Disney characters into photos with celebrities.

Back then, he only had a following of 500, but now he has almost 500,000 followers. He was happy to connect with so many new people, especially after his work was so popular on Bored Panda.

I get to connect with a lot of people. The amount of DM's that I got multiplied! I may not be able to reply to everyone, but I check DMs on a daily basis and reply as much as I can. It's cool to be able to talk with people from all over the world.

Andhika does more than creatively play around with Disney characters. He edits movie and television show posters. 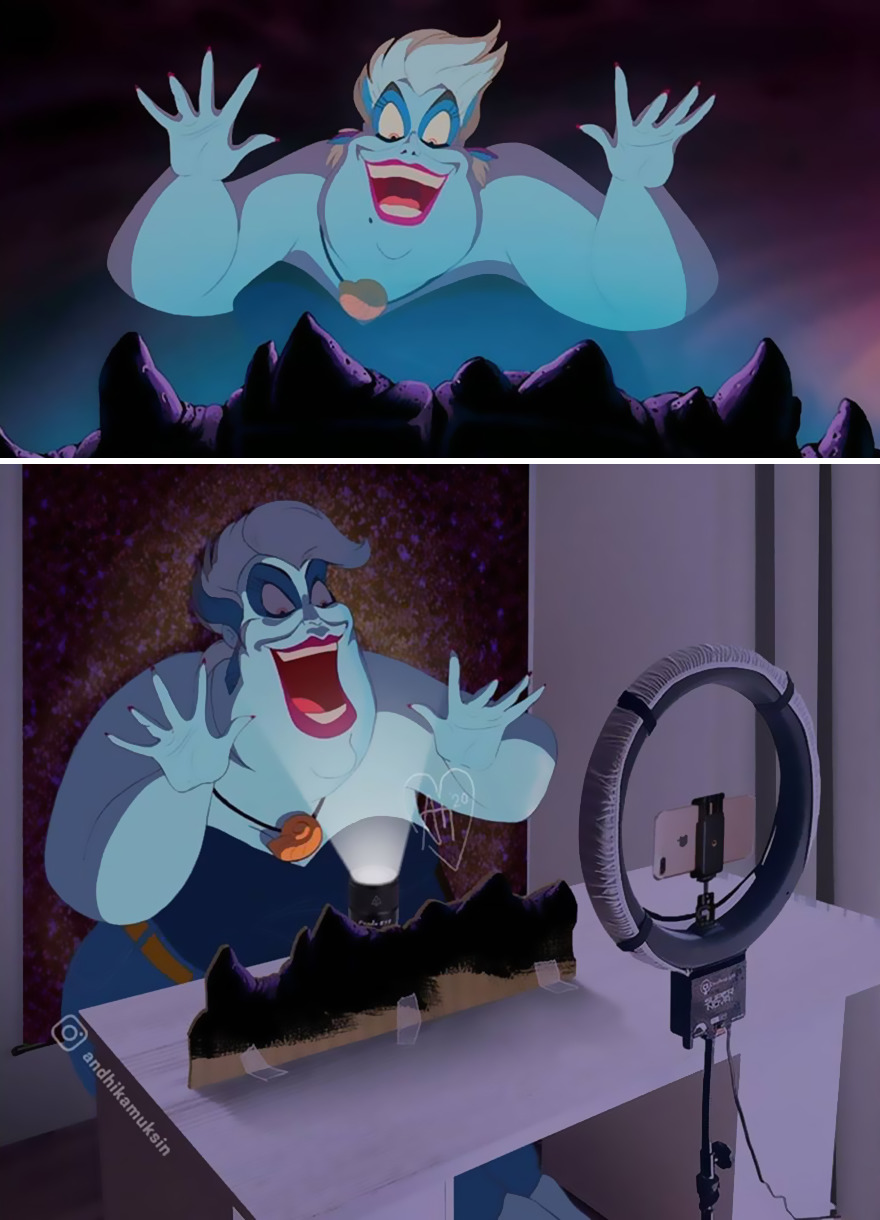 The artist also combines the faces of celebrities to see what their children would look like.

Of course, he also has his own concept of art that he shares with his followers. His art is filled with pop culture references and is almost always funny in one way or another.

Sometimes, he even works TikTok trends into his art. 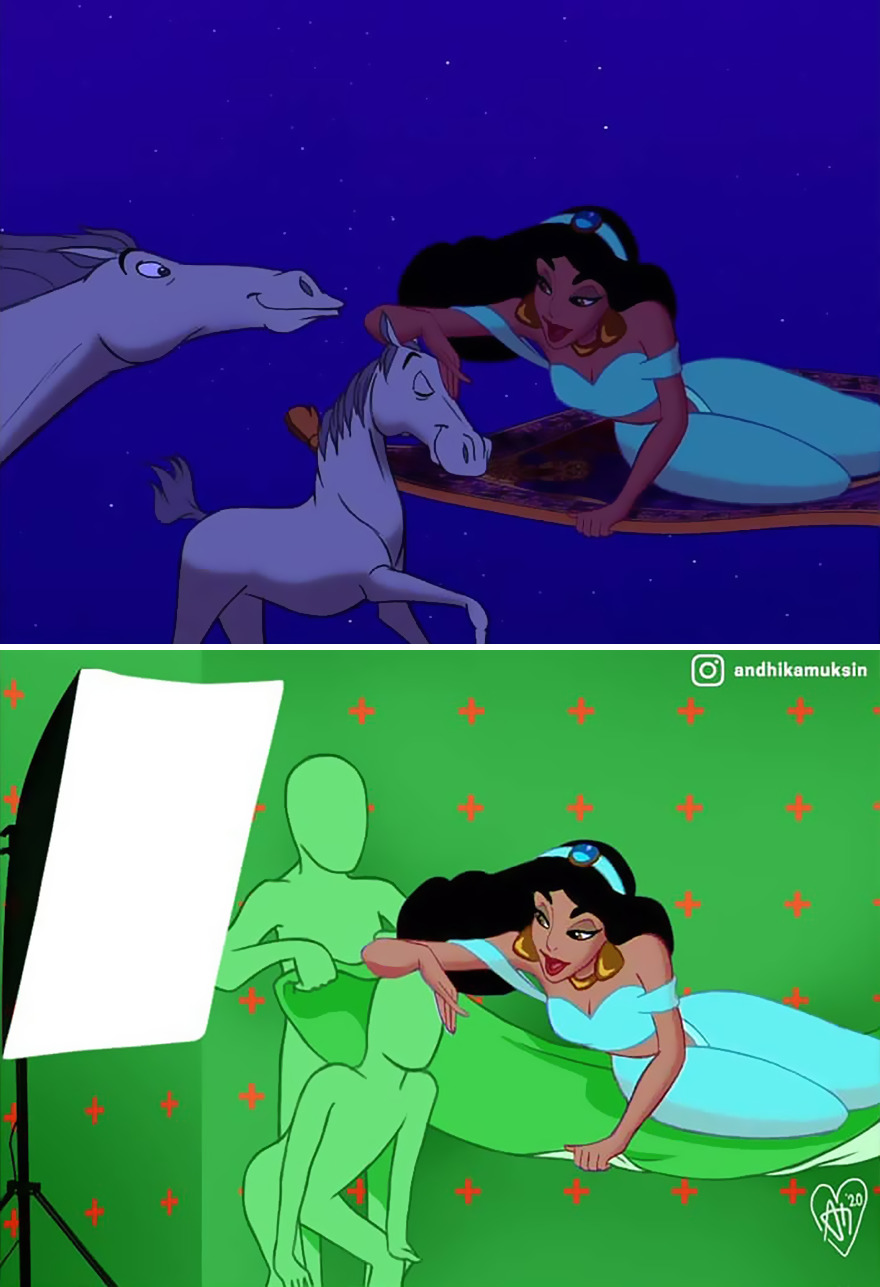 Netflix Originals and Studio Ghibli has also served as inspiration for Andhika before. He really enjoys taking characters and celebs and putting them in different situations.

Fashion shows, celeb snaps, red carpet events - you name it, and he will use it to create something new and interesting. 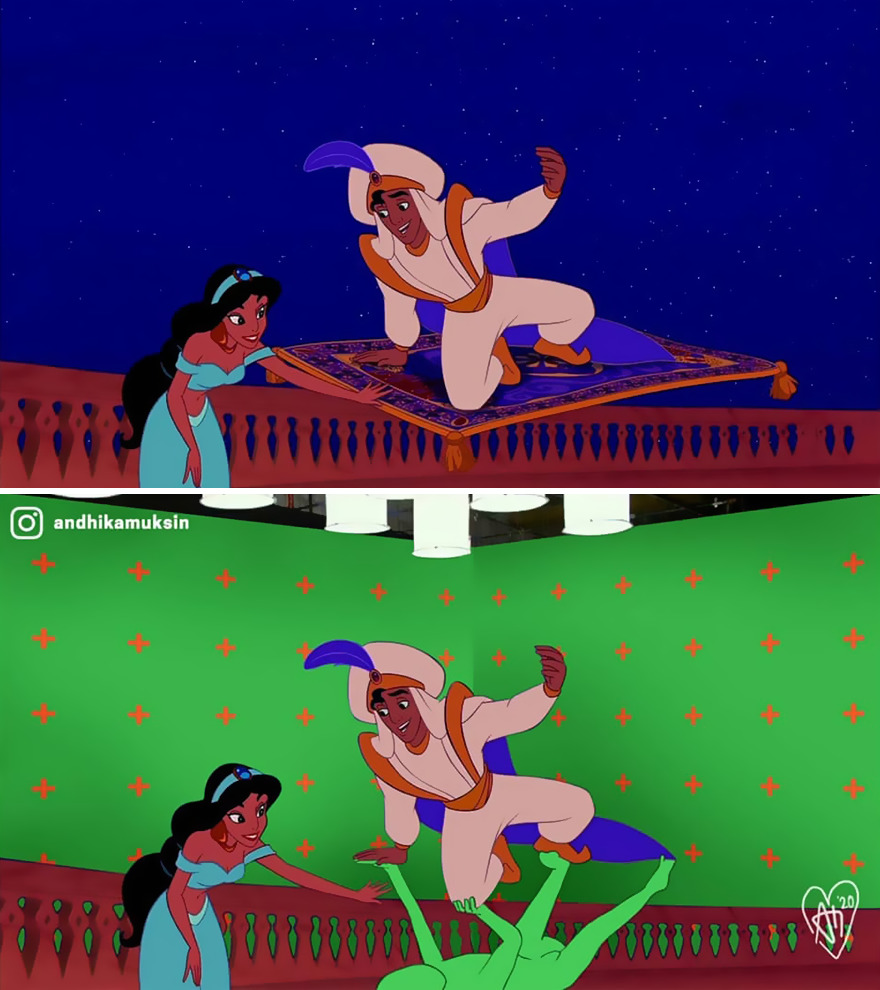 In an interview with Bored Panda, Andhika said he has always been fascinated with pop art.

I've always been into drawings for as long as I can remember. And collage art/pop art has always fascinated me. It's like giving a different personality to pre-existing images.

I guess I inherited this from my father's side of the family. Both my father and grandfather paint, although they do it more as a hobby.

For this artist - as is the case for many - drawing is therapeutic. It helps calm him down and relieve stress. 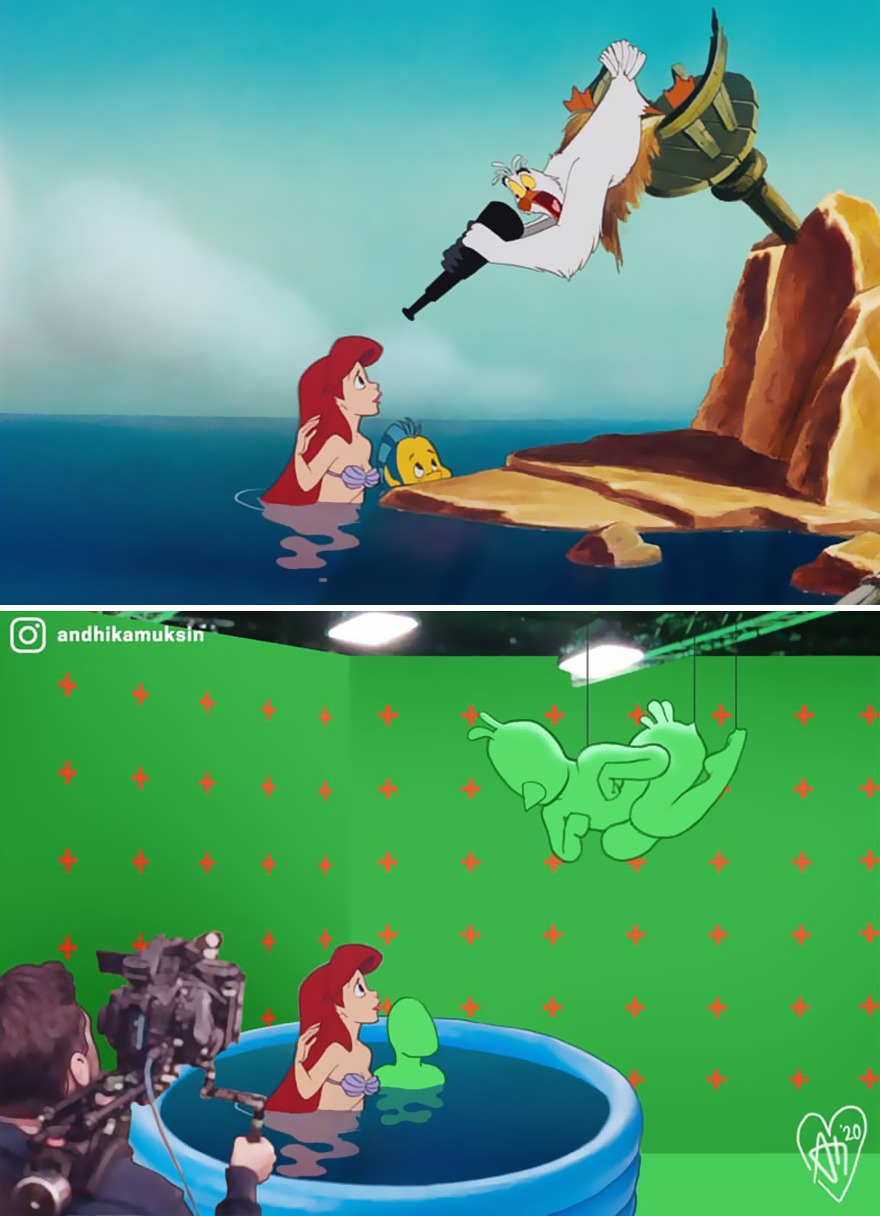 Andhika works at a digital company where he is a creative lead. After work, he is a digital content creator. 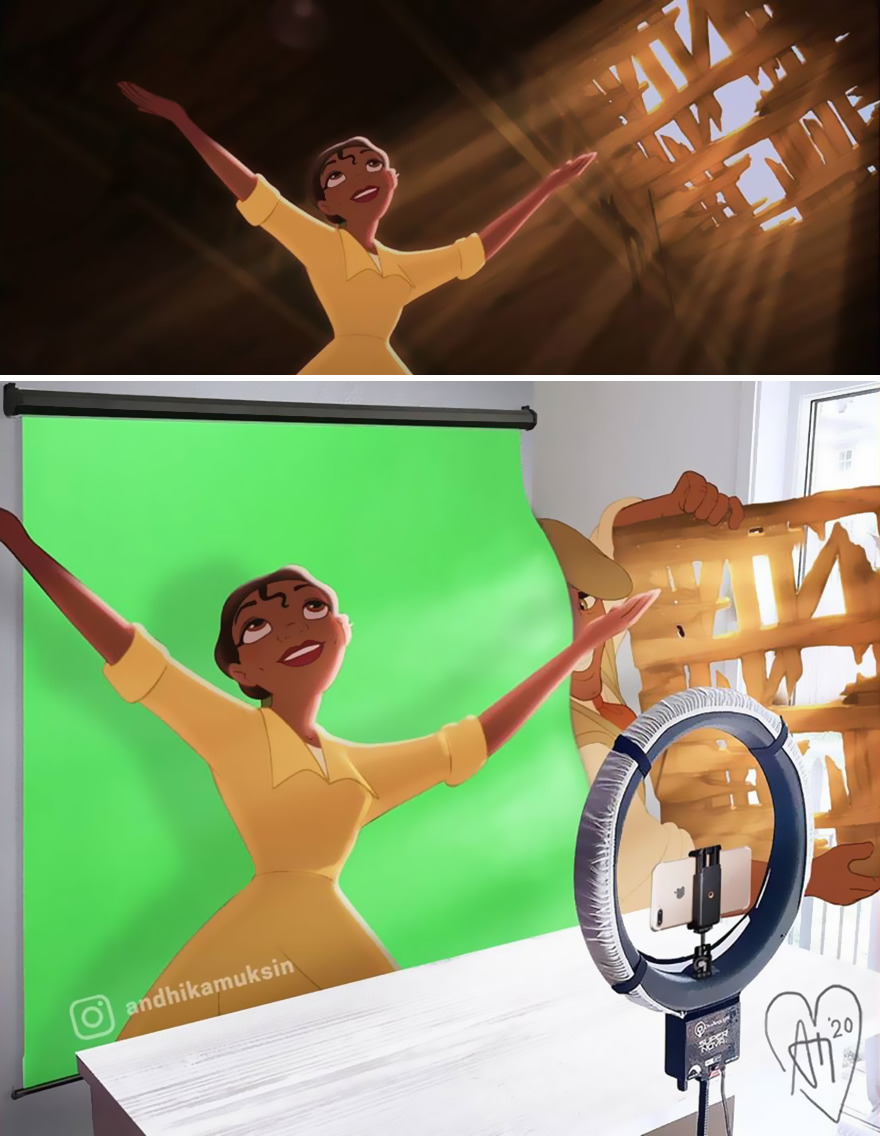 He has been working in the creative industry for a while and played around with many art forms. He's painted, created 8-bit style art and even jewelry.

According to him, all these experiences now influence his art.

The different backgrounds behind these creative experiences give me insights that affect both my creative modes.

Before I got to where I am now, I dabbled in many artistic endeavors: jewelry designer, painter, 8-bit style digital artist, etc.

Andhika has many hobbies other than drawing and creating art. He likes to create summaries of the books he has read. 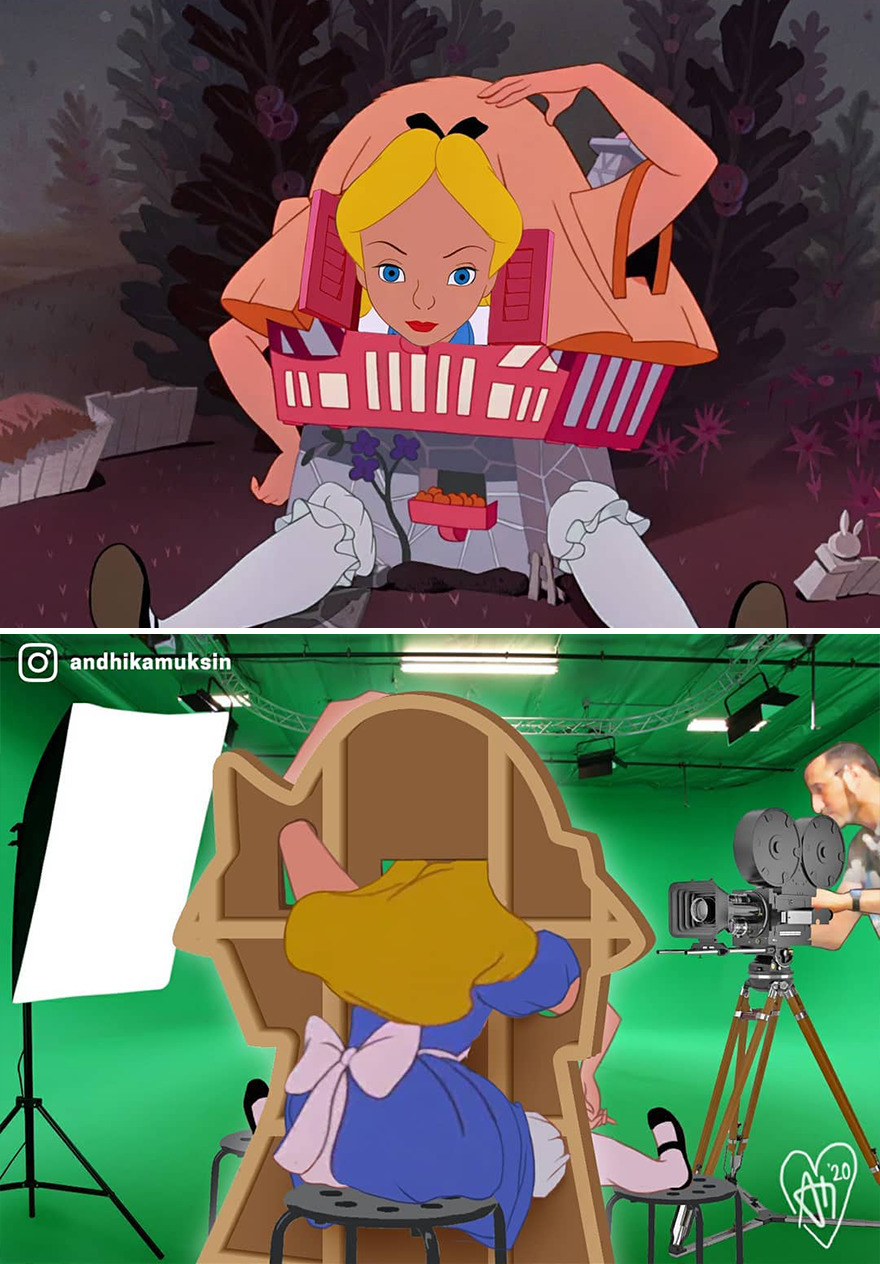 I know that this might sound boring to some people, but I really enjoy doing it. Again, the therapeutic part of it.

Many people think that artists jump in and create awesome-looking drawings, just like that. But there is a lot of planning and hard work that goes into creating something spectacular. 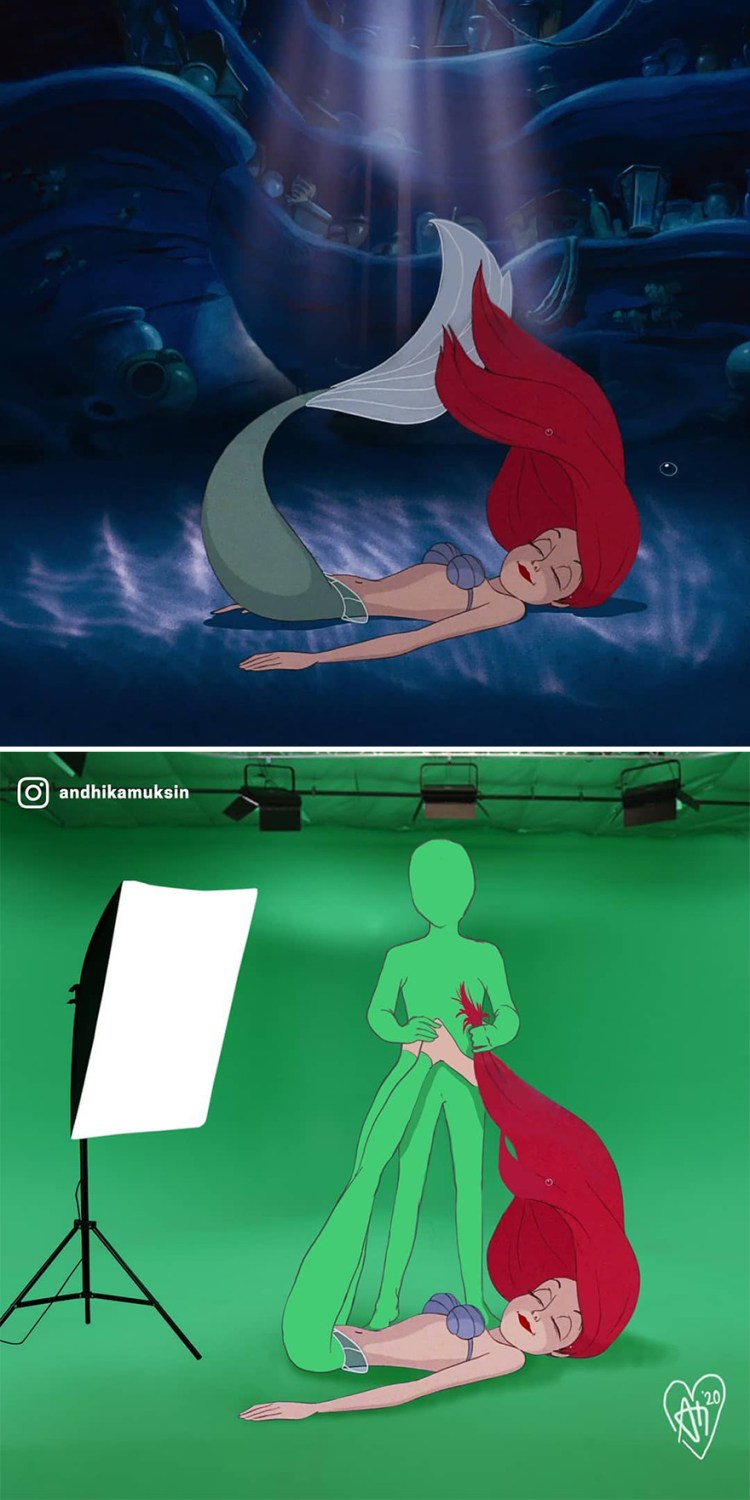 For Andhika, inspiration sometimes comes when he least expects it.

I put all my ideas in a journal, and at times these ideas came at the most unexpected time. And then I get to the "planning" part.

Some ideas are best made with illustration, some are digital collage and painting combo, etc. All these creative processes are done with Photoshop.

His Disney-inspired images can take many hours to finish - anything between two hours and two days. 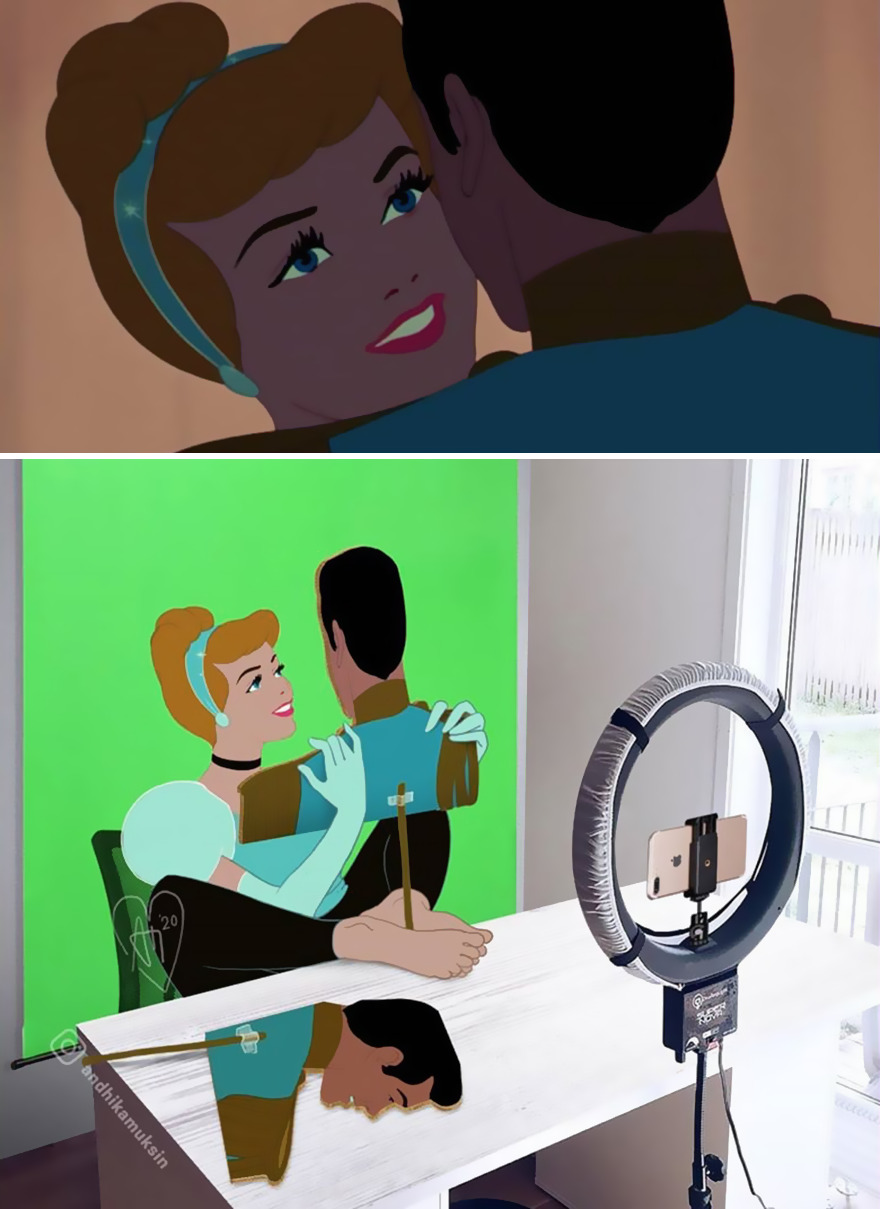 As for why he draws what he draws, there is no true logic to it.

There's no specific 'formula' for this. Sometimes I stumble upon interesting images and get an idea to 'tweak it,' or sometimes I just get this image in my head that gets 'marinated' over time, as if it was dying to be drawn.

What I have learned as an artist for the past 15 years is that the journey to find your artistic 'style' is as important as letting it all go for the sake of experimentation. Sometimes we all just need to shake things up artistically. 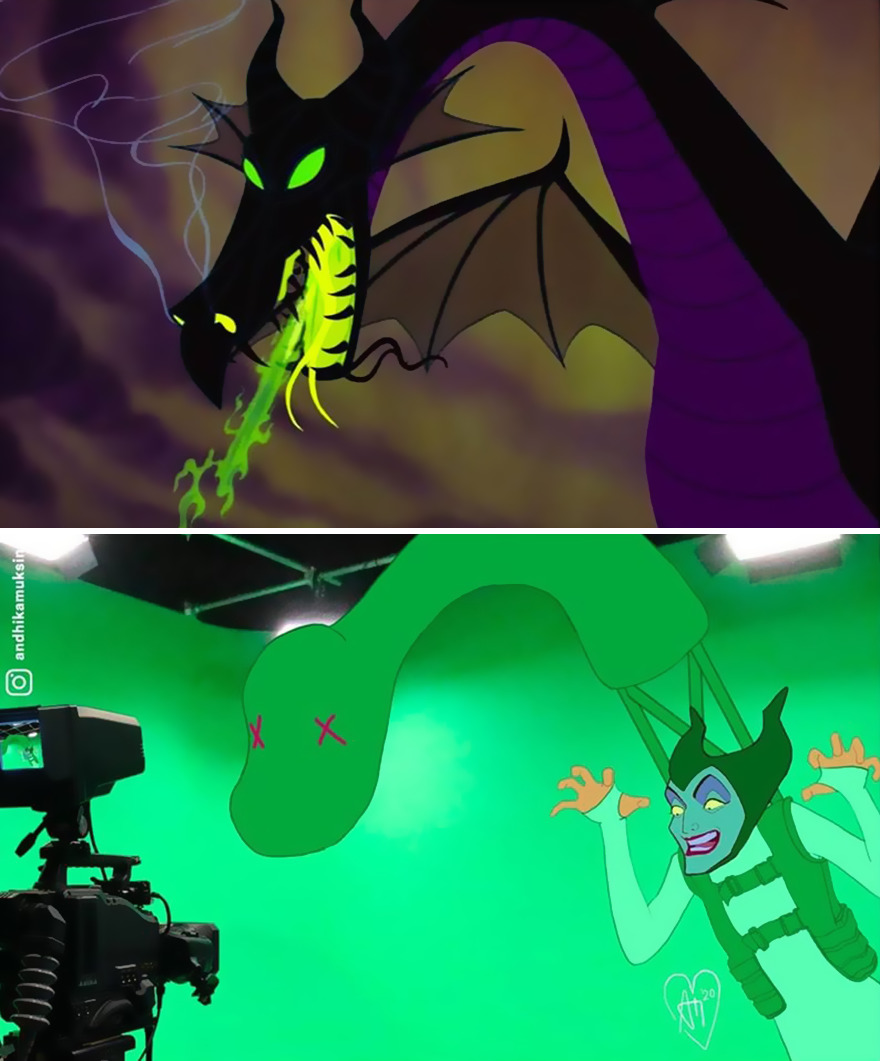 Why Disney? Well, because he loves it.

I'm a Disney nerd. I just love them so much. One of the things from my childhood that I've never outgrown. A Disney trip is always a part of my yearly travel itinerary.