When it comes to being funny, Germans get a pretty bad rap. You might even say they are the Wurst (ugh, sorry). However, some German jokes actually do induce a giggle—or, at least, a snicker. I have put together a list of my favorites below.

I will preface this by telling you I am biased when it comes to judging German hilarity. Full disclosure: my boyfriend of over five years is German, as is my housemate, and a few of my very good friends are German, too.

If you are interested in a little anecdotal evidence here, please read on. Otherwise, feel free to skip ahead to the German jokes.

Not German Jokes, But Still Worth A Laugh 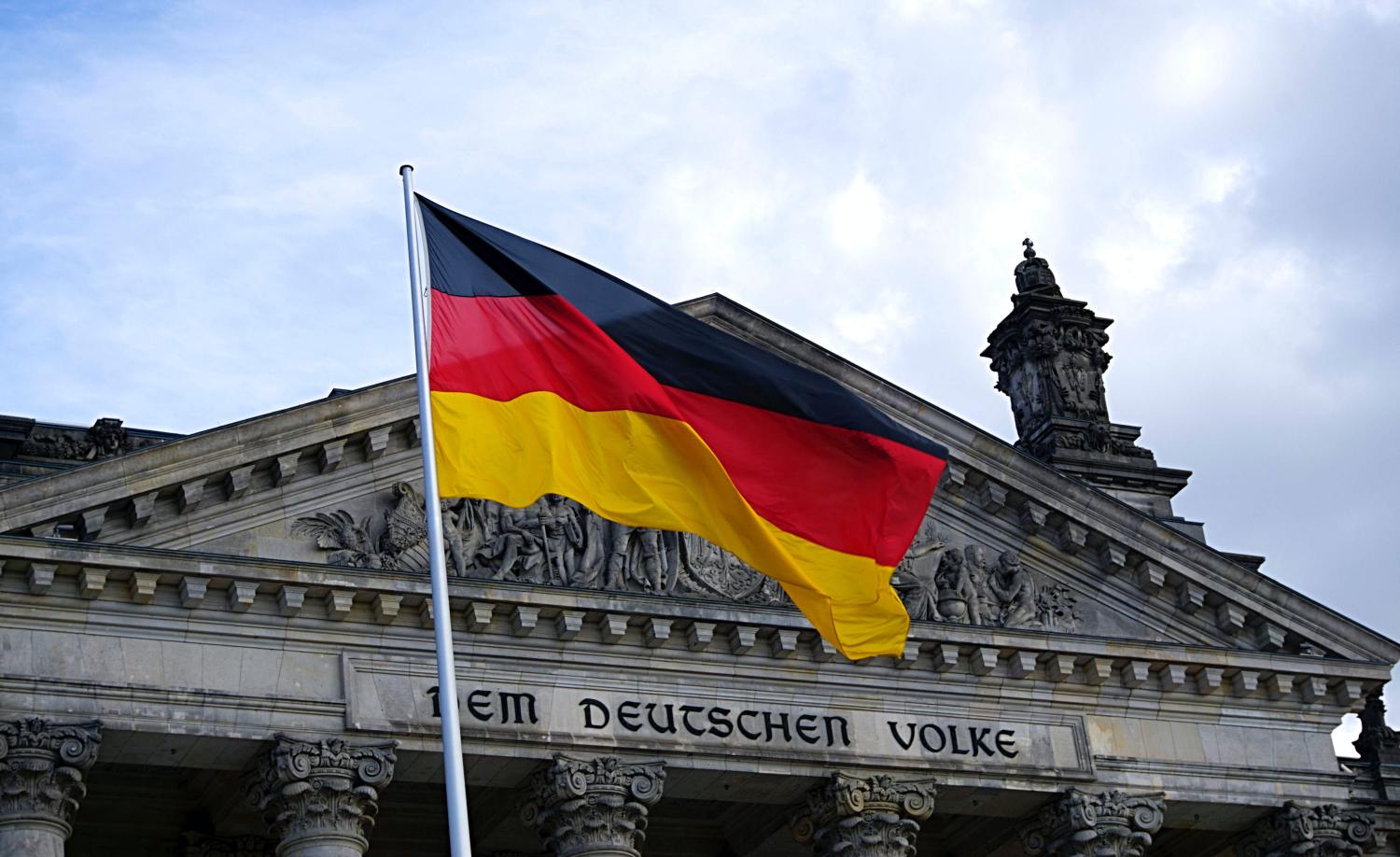 My main finding is this: Germans often appear intentionally funny to other Germans. But, my most significant source of laughter comes from Germans being accidentally amusing. Usually, this is because they live up to their pragmatic, efficiency-loving stereotype. Or, there is some kind of language mix-up that has me literally spitting out my coffee.

Before I go on, please note that I have all the respect in the world for multilinguists. As an English speaker who has traveled the world speaking only one language, I deserve to be made fun of. Be assured that I laugh with my friends and never at them, and with their absolute encouragement.

One of the first quirks I noticed with my German boyfriend was the typical delivery of his jokes. He immediately followed them with, "I made a joke!" which, ironically enough, was usually the funniest part.

Then there are the "I can't remember the English word so I will guess" moments, or alternatively, the literal translations. Some of the most memorable include bum stick (lip balm/chapstick); stinger pig (hedgehog); reading rat (bookworm); parmesan machine (cheese grater); and foot tips (toes—ew, I know).

Last week I lost my car keys. After an hour or so of searching the house, I finally found them. My housemates, including my German housemate, had been avidly helping me the whole time. When I showed him the keys, he looked beyond confused. Then, a dawn of realization swept across his face.

He admitted he thought it was strange I was desperately hunting for khakis, as in the pants, at 8 a.m. on a Monday. True story. Sigh.

Now, moving swiftly onwards. Here come the ten amusing German jokes you have been waiting for. Prepare to be convinced that a German can actually make you laugh—on purpose! 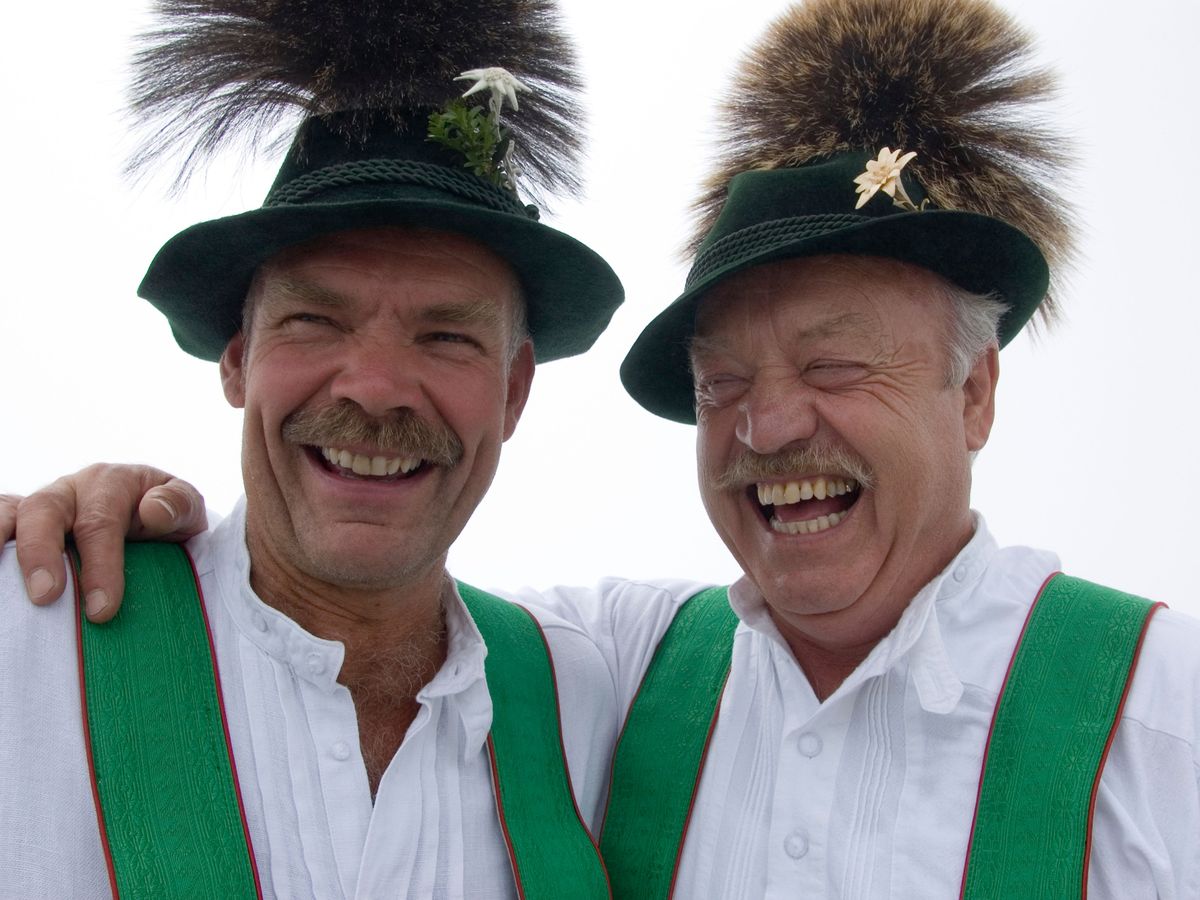 The English translation:
My wife asked me to give her the lip balm. I accidentally gave her the super glue. She still isn't speaking to me.

2. Jokes About S**t Are, Naturally, Universal 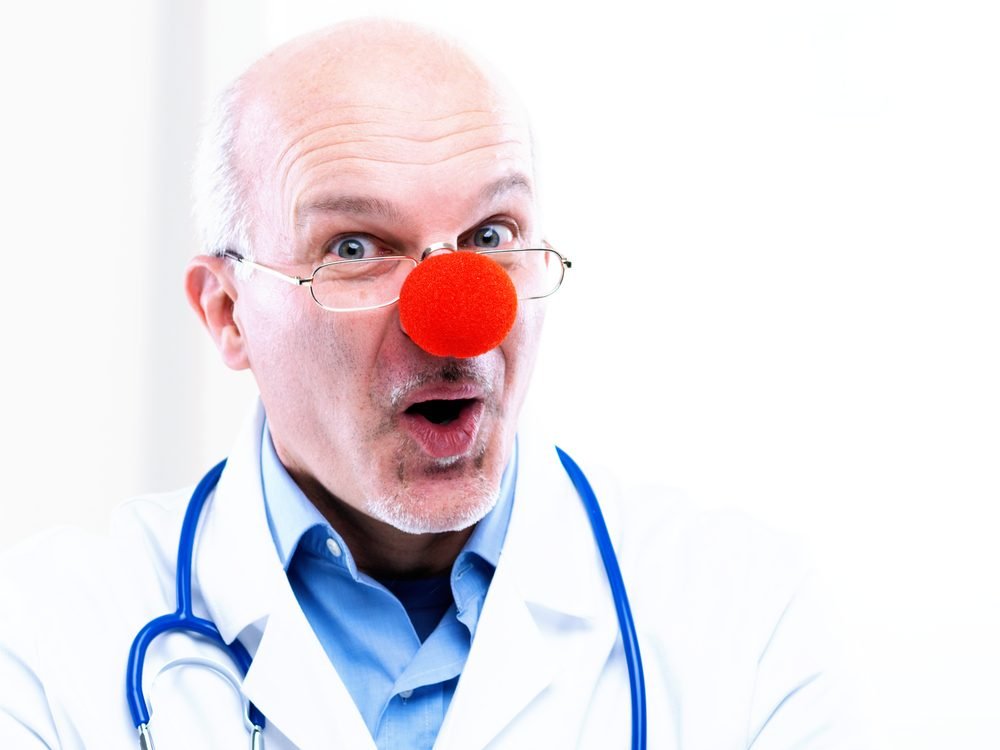 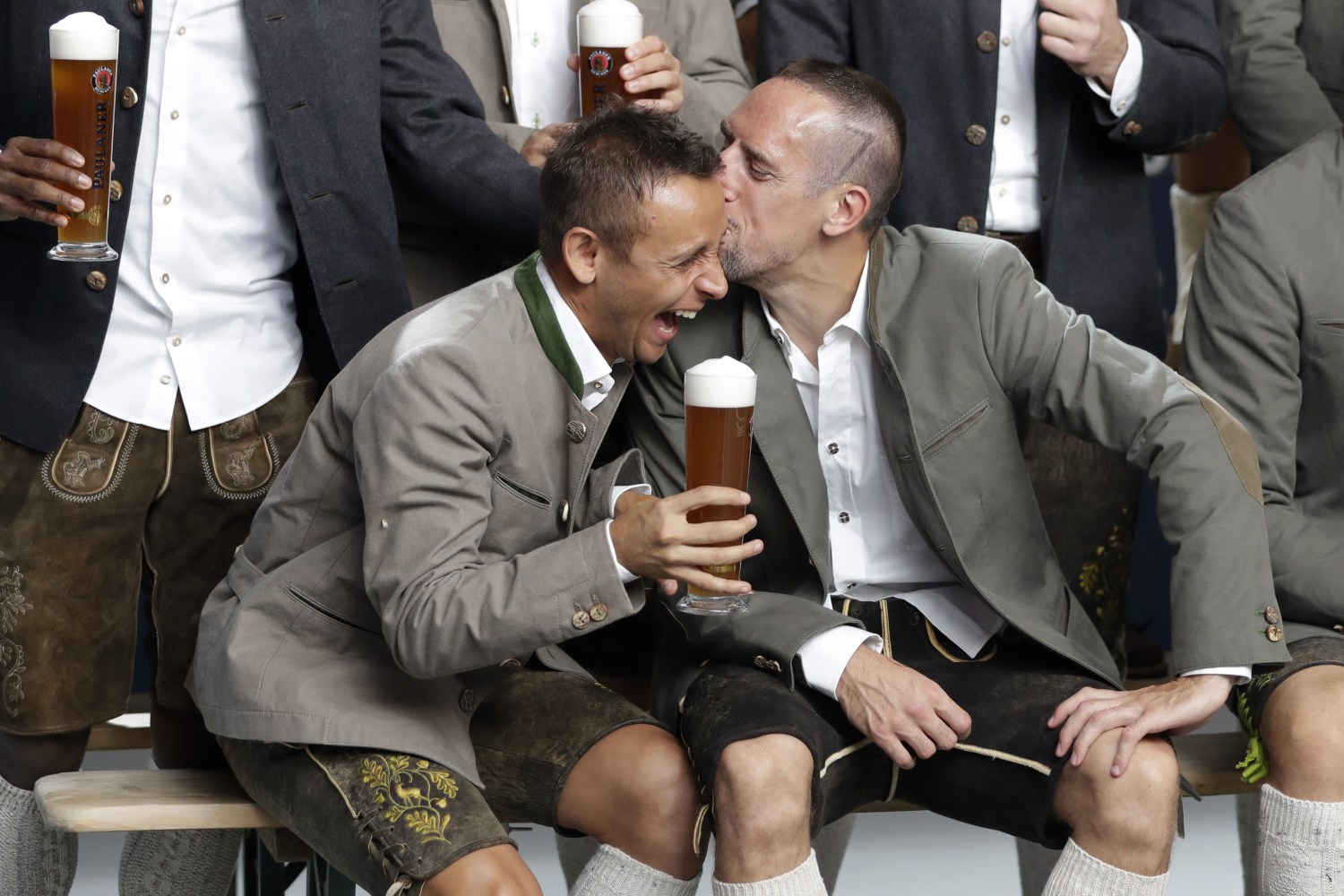 The English translation:
What do women and hand grenades have in common?
When you pull the ring off, your house goes away. 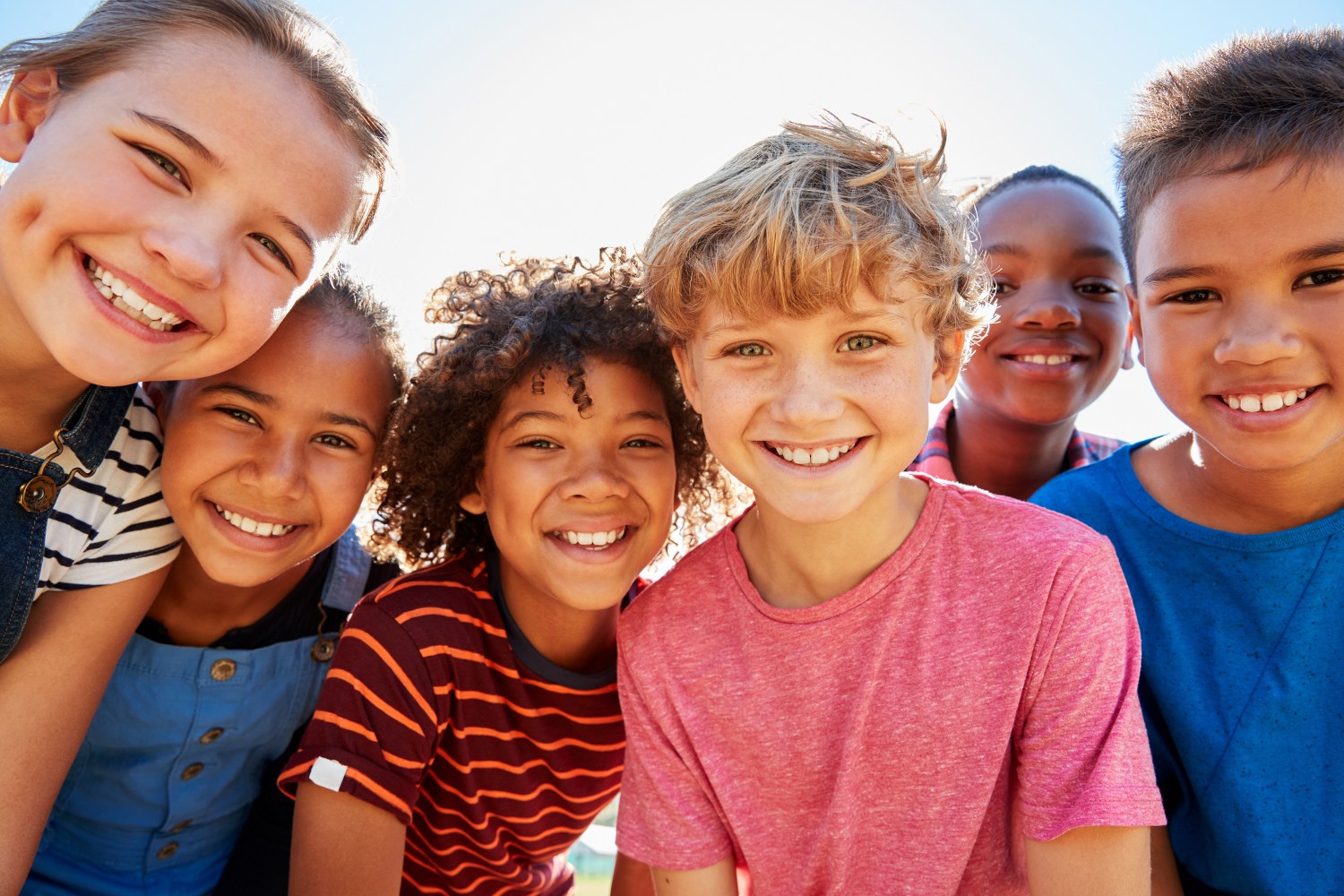 This category of German jokes tends to be on the macabre side. This is typical German dark humor. There are endless amounts of "All Children" German jokes. The idea is that the child's name rhymes with the last word. Here are just a few examples.

In English:
All children get ice cream, just not Heinz—he gets none.

In English:
All children stroke the cat, except Ralle, who feels the claw.

Ouch. It sucks to be Ralle. But, we can still ramp it up a notch.

In English:
All the children dig on the beach, just not Hein: they dug him in.

The English translation:
All the children run out of the burning cinema, just not Abdul; he's hanging in the folding chair.

If I am honest, these were a mild selection. I can see why someone might think Germans have no sense of humor if they read one of these German jokes in English, especially if the translation does not rhyme!

5. Poking Fun At Other Germans 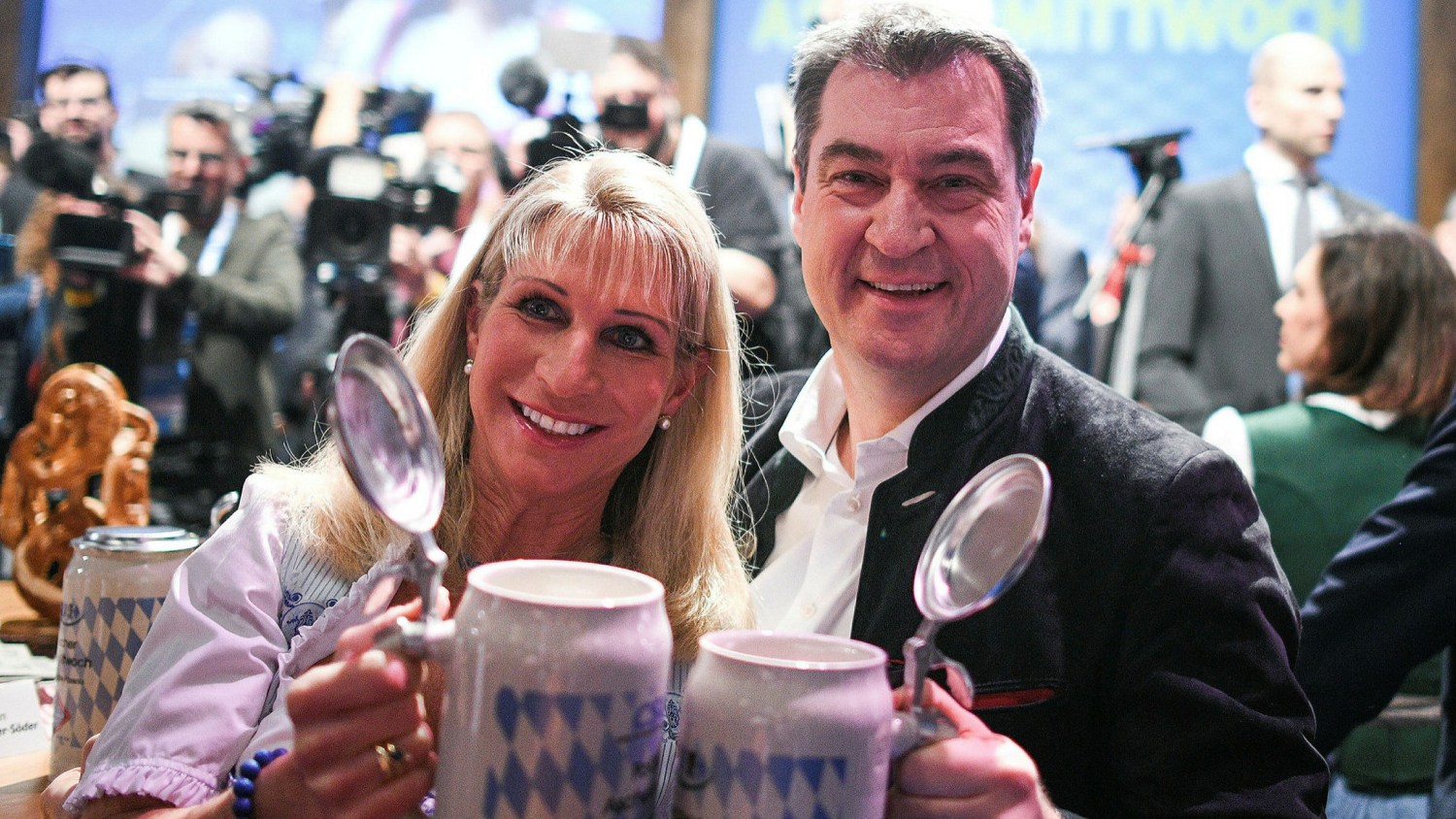 The English translation:
What is the difference between a Turk and a Bavarian? You can understand the Turk when he speaks German.

There are 16 federal states in Germany, and Bavaria is the largest of them, located in the southeast. Bavarians have a reputation for being traditionalists. Conjure up the typical image of a German. If you imagine a lederhosen-clad Hans, drinking from a Maß (beer mug) and eating Weißwuascht (white sausage), then you have successfully pictured a Bavarian.

People from Bavaria (Bayern) tend to have a strong sense of pride and often identify as "Bavarian" before "German." Their dialect is noticeably different from what is spoken throughout the rest of the country, hence number 5 in our list of funny German jokes. 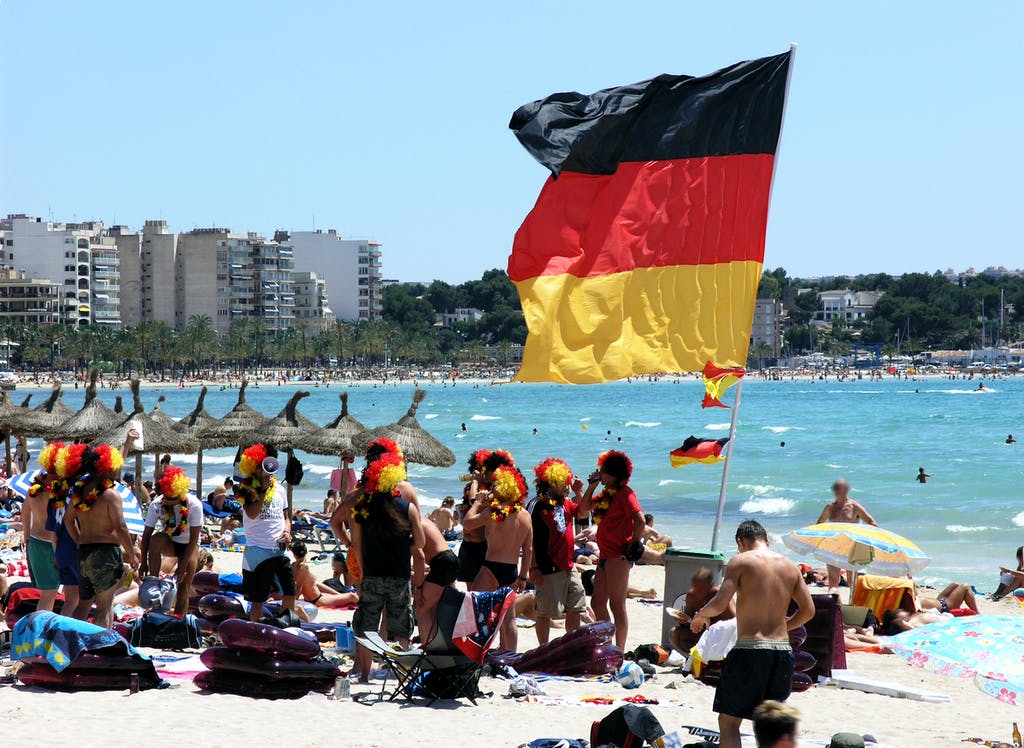 If you have ever traveled, well, anywhere, really, then you will almost certainly have run into German tourists. Supposedly, they spend €65 billion (that's over $88 bn) per year on foreign travel—more than any other nation!

The English version:
"So then, did you have any problems with your new voice computer on your tour of Greece?" 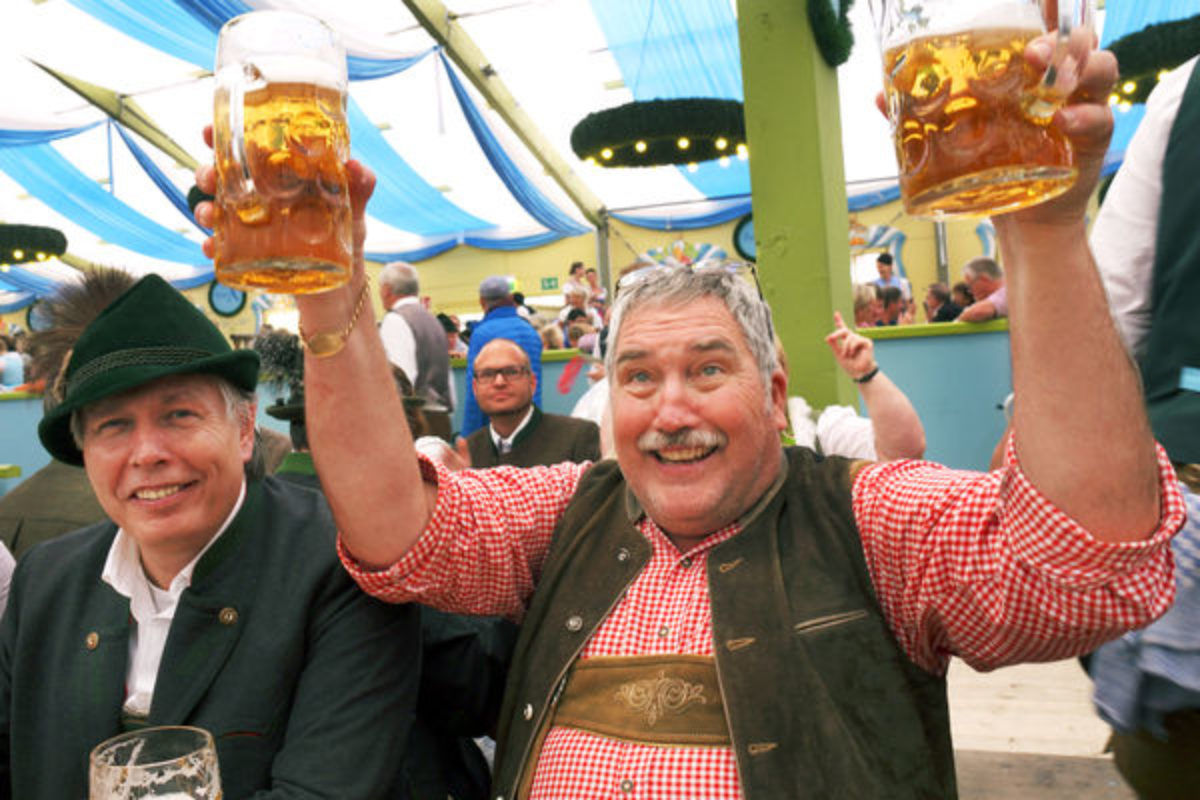 In English:
A guest sits down at a table in a restaurant. Immediately, the waiter comes running to take his order. The guest asks, "Do you have frogs' legs?" to which the waiter replies, "No, I just run like that!". 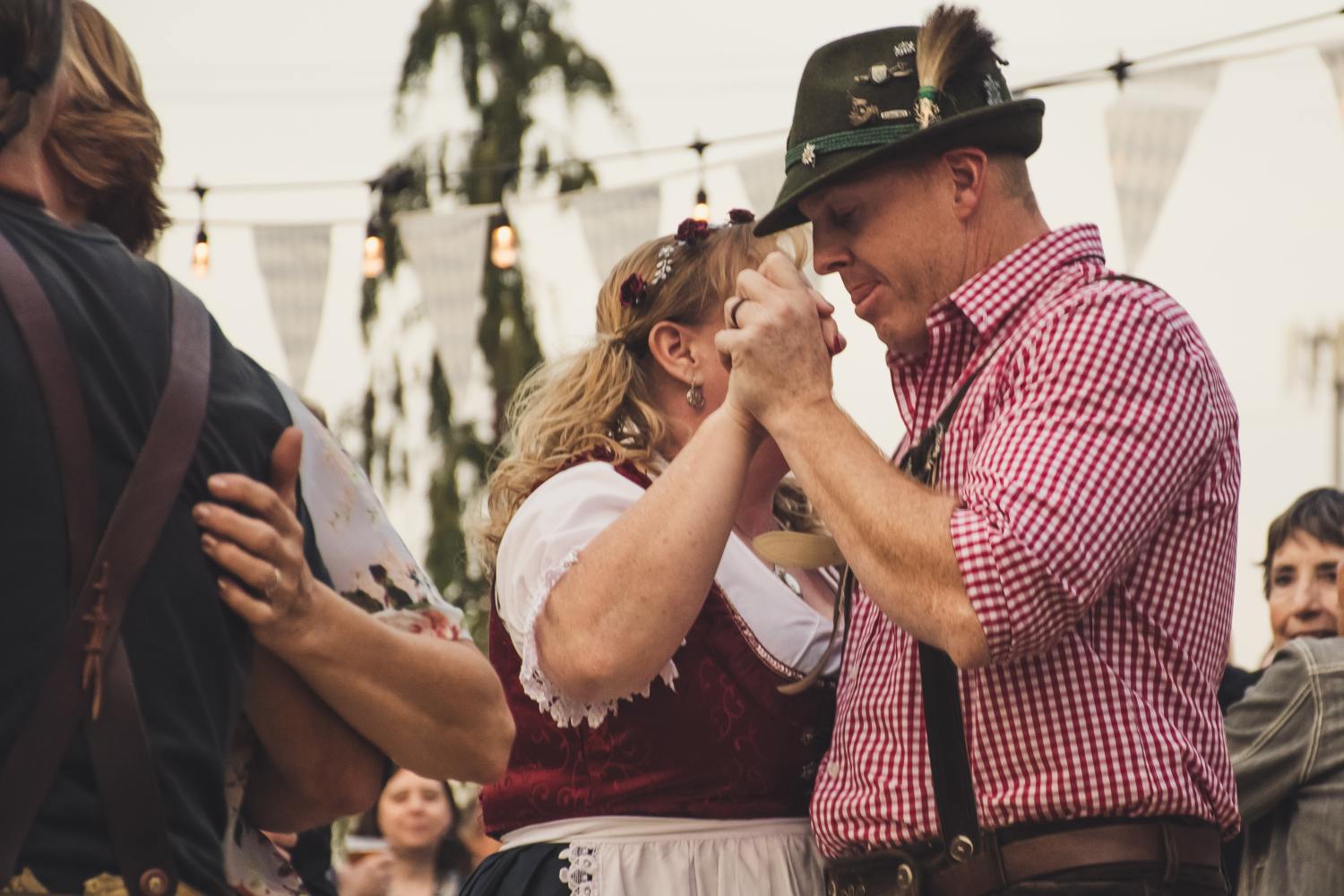 German grammar is notoriously complicated. But, not only that. The German language contains around 5.3 million words. That is eight times more than the English language! So, it is inevitable that there are some great puns that make up the best of German jokes.

The English translation (literal):
My watch has fallen, but I can't pick it up. I don't have the watch-picking-up rights.

This German joke works because Urheberrechte means copyright(s), and Uhr means wristwatch (in this context). 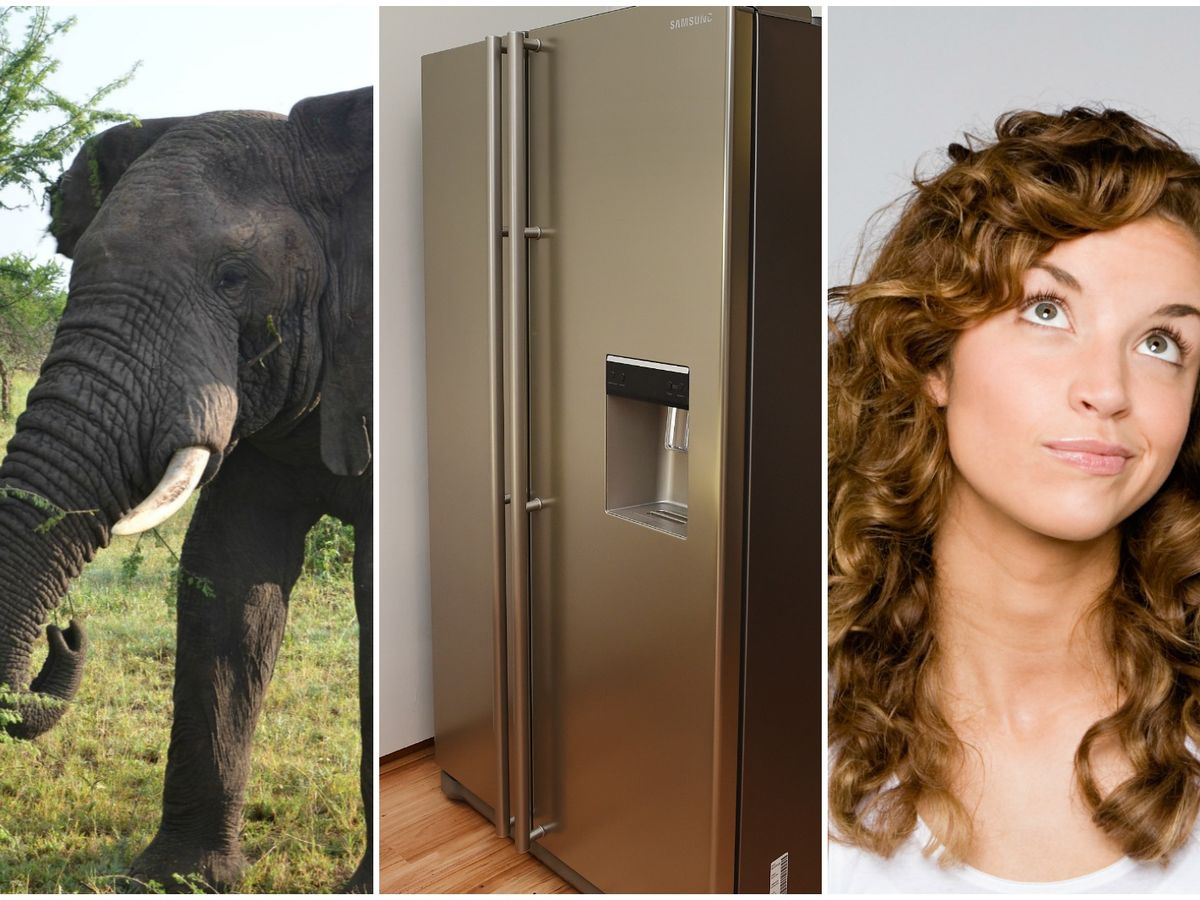 The English translation:
How do you put an elephant into a fridge?
Open the door, put the elephant inside, and close the door.

And, how do you put a giraffe into the fridge?
Open the door, take the elephant out, put the giraffe inside, and close the door. 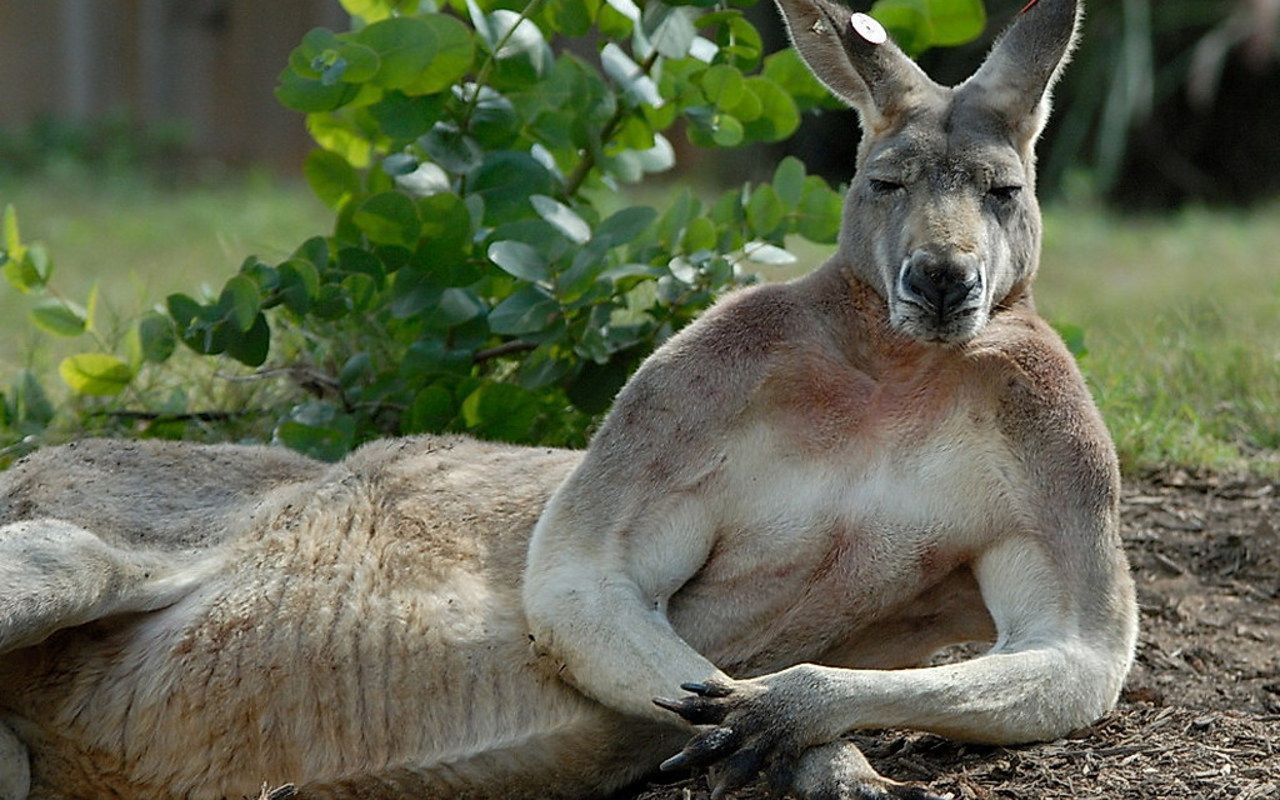 The joke in English:
Can a kangaroo jump higher than a house?
Yes! Because a house can't jump.